Long time that I have been active on the forum. Here is a new piece of “art”. 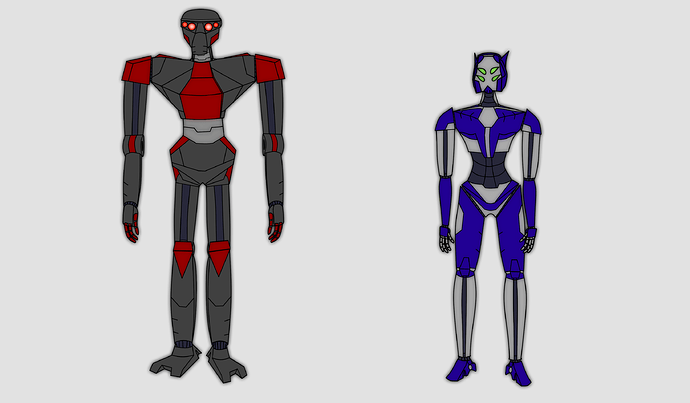 On the left: Terlerix, on the right, Selix. Both are from the same species, but are in fact, different races. Here the backstory, also @Toa_Vladin, you wanted to know about them. Well after several changes, here it is.

An organic species called Akorix was the predecessors of these synthetic life forms. The population of the home planet of the Akorix were infected by a parasite, which killed already half of the entire planet’s population. A scientist found a radical solution to survive this plague. They had to transfer their “soul” to a synthetic body. Parasites usually attack the heart of the Akorix. The synthetic lifeforms don’t need any specific organ. They are supplied by an energy which is unknown to human kind (it’s not like they had a nuclear reactor inside them). The last survivors managed successfully transfer their soul to the once lifeless body of a robot. They changed their species’ name to “Neo-Akorix”, being the new subspecies of the organic Akorix. With the years, the Neo-Akorix reproduced (don’t ask how) and became one of the biggest population of the Samech Galaxy. But this changed, after several parts of the population had other ideas about how to dominate the galaxy. While the majority of the male population wanted to dominate by force the entire galaxy, the majority of the female population preferred a more moderate rule over the galaxy. A war began between the two, and they began developing new bodies(Terlerix for males, and Selix for females). All those, who were neutral or opposed to this war were chased or killed. While the war continues over decades, both populations are dying more and more due to the separation of male and females. So both decided to use drones mostly, directly linked to their minds. Humans have now entered after centuries the Samech Galaxy. But they won’t be welcomed by the most powerful species that ever existed in this galaxy for millenials, and war between Humans, Terlerix and Selix is inevitable.

PS: I can’t draw hands. That’s the worst part of my artwork I think.

Nice designs! I like the contrast the two hold proportionally and the design of Selix’s head.

With the years, the Neo-Akorix reproduced (don’t ask how)

So your story will be a war between these two species and humans?

I SAID DON’T ASK HOW? I don’t think it is the right place to talk about that here, just saying.

That’s somehow what I imagined(kinda like a Mass Effect story).