Minor note: Please note that the old replies were made before I edited this topic. 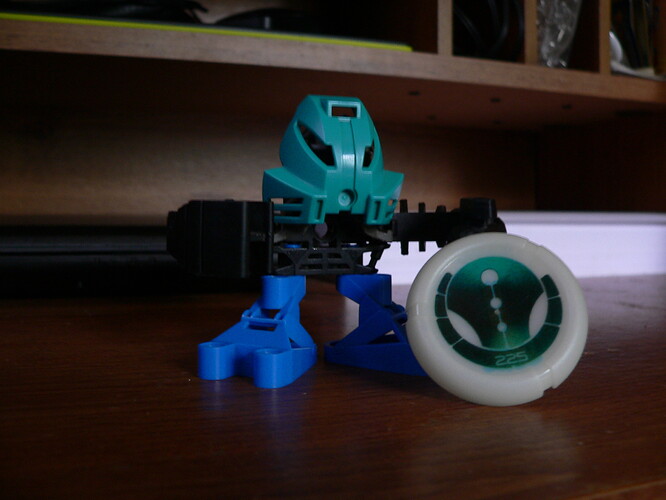 Terrus was discovered in a pod located in underground alien laboratory on Earth. When he was awoken, he had no memory accept for that of his name. He was taken in by William, the one who initially discovered him. As time when on, Terrus had dreams of Metru Nui, but had no idea what the city was. William made it his goal to find what and where Terrus was having dreams of. In time, William located the cities position in the universe and took Terrus there.

Personality:
Terrus is very shy, akin to someone with Autism. But this doesn’t fully hinder Terrus from socializing. With help from William, it can be observed that Terrus does like to talk to people and other bionicles. Although, Terrus does have a tendency to continue a conversation for a very long time and can easily get off topic. Terrus is typically kind and polite, but will get rather vulgar when he gets very stressed because of William’s influence on him. But one thing that separates Terrus from William is his habit of hiding whenever there is an issue or conflict.

Extra stuff that is not the bio:

Now for those who read this and are now looking at the replies and going “WTF? why did these people type these things? They make no sense”, Those were for the original content of this topic. Why did I change up the topic? I didn’t feel like making another post for Terrus and it would be redundant. If you guys want the original stuff back in this Topic, I’ll think about putting it back in. I have it all saved on my computer.

Since I don’t feel like typing out the description I typed on DA here: http://fav.me/d8g3oyk There is some stuff I address on the DA page for this bio. I suggest you read it real quickly.

I don’t have critique.

I was referring to the story. I don’t expect anyone to critique the McToran.

In that case, congrats to you because it’s interesting.

Interesting story…ya got meh there.

if you wanted critique on the story, why is this in lego creations?

I want him. I want him for my army of Tohungans.

You’re so cruel! He isn’t like that, he’s more like a special, heartfelt matoran, rather than a replaceable character.

if you wanted critique on the story, why is this in lego creations?

Because I am not good with posting on forums.

You’re so cruel! He isn’t like that, he’s more like a special, heartfelt matoran, rather than a replaceable character.

As in, He feels more like a unique character using a generic shell

I believe he means that the character itself is unique but the build isn’t, hence the generic shell part.

Oh come on! I don’t have the proper parts to do a better MOC.

I’m not complaining. I’m just saying you don’t have to re-work the character concept.

Pardon my outburst, I didn’t mean to start complaining like that.