Who says that with ending your career as a Toa you have to stop being a hero? 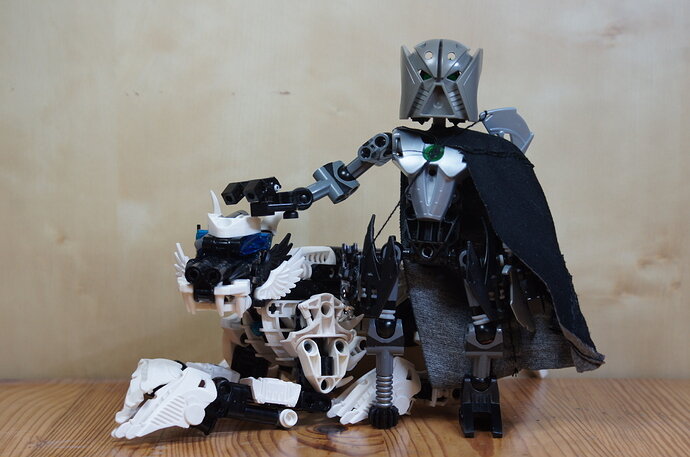 After long years as a Toa of Earth, serving all across the universe, Tharopi wasn’t really interested in withdrawing to some village and spending the rest of his days telling Matoran what to do after he became a Turaga. His elemental powers as well as his body might have been diminished, but all that experience in fighting the many forms of evil surely must count for something? So Tharopi held onto his old Toa tool, grabbed some more practical weapons for his current height, and became a wandering Turaga, helping those in need and supporting or training Toa he came across.

The first years were tough, however, as Tharopi had to learn how much he had relied on the strength and power of a Toa in his past battles. A struggle with a feral Muaka ended in the loss of one of his feet and him barely making it out alive. At other times he was forced to stand by and watch while Toa who were still green behind their masks dealt with a foe he himself just couldn’t match in power anymore.

Always having posessed a talent for handling Rahi, Tharopi on one of his journeys through a mountain range on the Southern Continent befriended a Drift Wolf after he helped it escape a crevice it had fallen into.

Drift Wolves are mostly solitary predators who use their fine nose and keen eyes to track down prey in the snowy mountains, often ambushing from behind snowdrifts which gave them their names. Uncareful Matoran also end up as food for Drift Wolves now and then, which results in them being hunted near settlements.

Eventually Tharopi managed to tame his new friend - whom he called Atoru - enough that the wolf would allow the Turaga to ride on his back, giving Tharopi a much higher mobility and for the first time an effective way to use his old Toa tool again - as a lance. Since he wasn’t sure if Atoru would accompany him if he left the mountains, he stayed there afterwards, traveling from village to village helping with problems or carrying news. 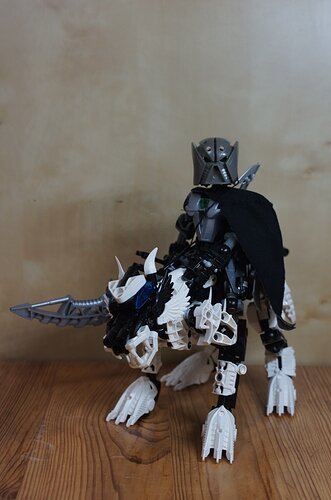 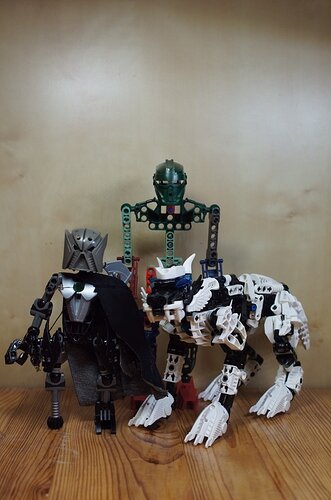 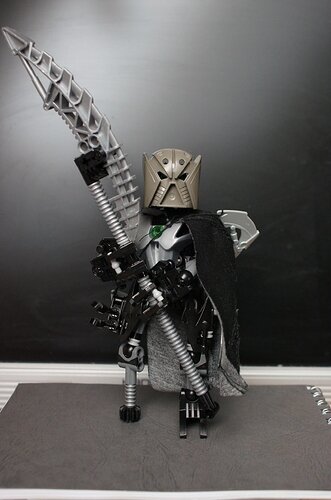 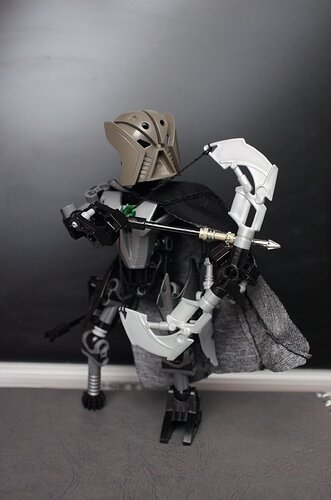 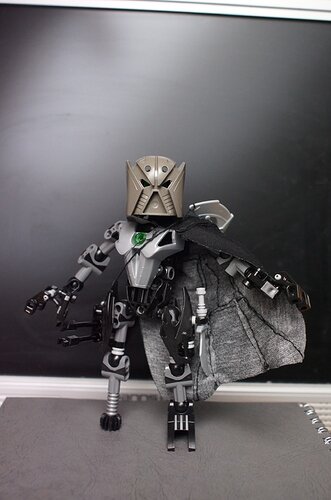 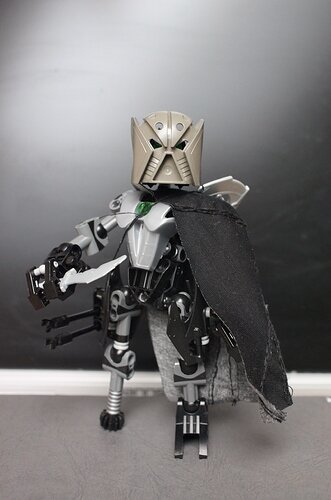 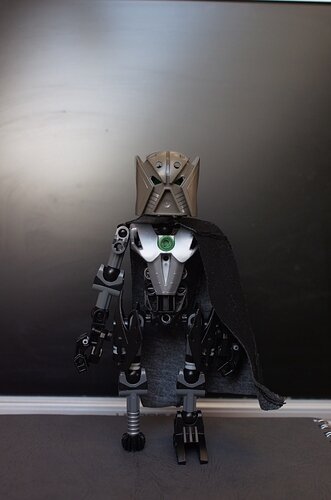 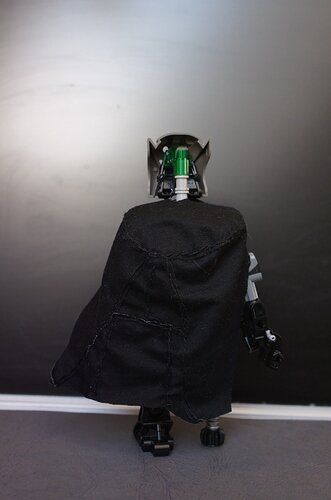 The cape was deliberately sewn together from cloth scraps to give it a rugged look. Not sure if I managed it that well, but at least I found a use for those scraps 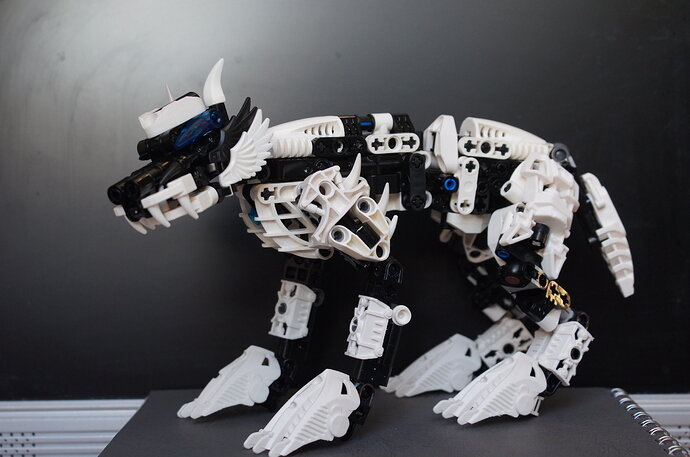 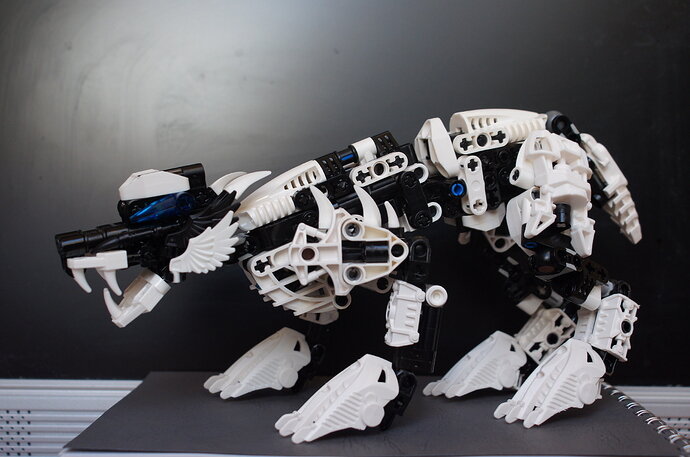 As you can see - articulated mouth and ears. 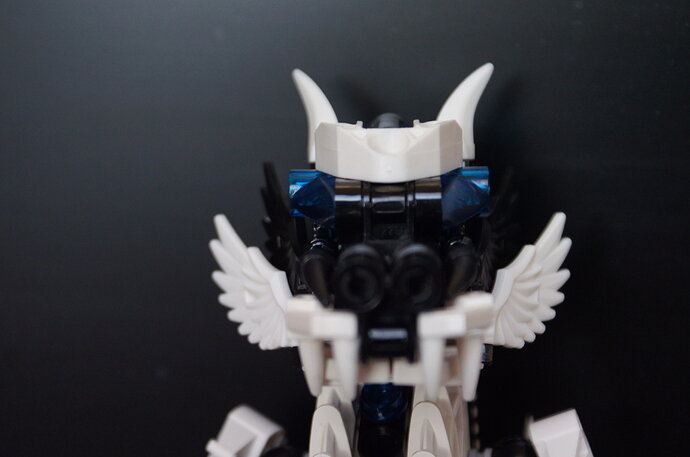 I just couldn’t manage to get a sharp picture of the head from the front, but I guess this gets the job done of showing off the cheeks which I personally particularly like. 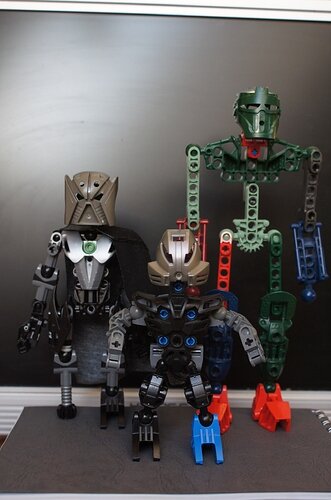 Size comparison of how I roughly imagine the height differences between Toa, Turaga and Matoran on a MOC scale. Though I guess custom Toa are always slightly bigger.

I basically only built these MOCs because I wanted to use the Metus helmets as feet. And then I thought that adding a rider for the wolf might be neat. So Tharopi is actually just a tablescrap - he does the job surprisingly well, though, right?

The wolf, is definitely highlight here. I love it.

That wolf is amazing looking. I also really like the turagas bow and cape.