The Brotherhood of Makuta - Anjan 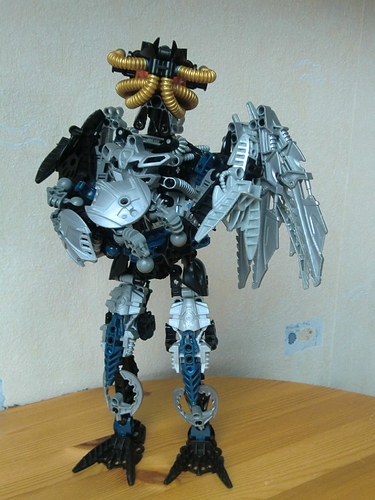 When Mata Nui created the first Makuta, he was inexperienced and made some mistakes. The result was Anjan. While he looked like all other Makuta, there was a glimmer of insanity in his eyes from the beginnig. Mata Nui saw that and ordered Artakha to make a special Kanohi that would help Anjan keep his powers and mind under control.

After that Anjan joined the other Makuta in forming the brotherhood and started to work on creating Rahi. He actaully became one of the most respected of the Rahi creators, as he had many brilliant ideas about developing ecosystems and food chains.
However, from time to time small glimpses of his uncontrolled nature could be seen. His powers would slip slightly out of control and his Rahi tended to explode or go berserk. The only creation of his that was ever spread throughout the Matoran Universe was a small bug of which the only drawback was, that it tended to nonsensically attack Kanohi.
He also never had any control over his Rahkshi. Miserix forbade him to create any, after one of them nearly blew up the brotherhood’s fortress on Destral and sent Anjan finally to Artidax where his experiments wouldn’t be a threat to anyone but himself.

Because of his powers of quick healing running wild one day, Anjan’s Antidermis became gaseous much sooner than that of the other Makuta. Experimenting with it he created more Kraata and Rahkshi, not heeding Miserix’ order. The result was the same, though. The Rahkshi wouldn’t take orders from him and attacked anything living in sight from each other to Anjan himself and the plantlife of the island. Instead of destroying them, Anjan constructed special prison cells, where he shut them in seperately for further studys.
One Rahkshi, however, managed to damage Anjan’s mask, so that its power began to seep away. Anjan’s thoughts began to make ever less sense and his powers would regularly run out of control, destroying everything in his surroundings.

After a while he got it into his head, that he should pay a visit to Destral and elevate himself to Turaga of the island. After all, he was the eldest. He packed all his Rahkshi in their cells on a boat and set off.
When he neared the island of the brotherhood, a Rahkshi from there came to him to see what his business was. Anjan destroyed it, claimed offense and declared war on his brothers and sisters.
He unleashed his own Rahkshi on the shore which immediately started tearing each other apart. Anjan himself strode up to the fortress and demanded tribute. When a Makuta asked what in Mata Nuis name he was talking about, Anjan attacked him with a bolt of lightning.
In the end Miserix and a couple of others defeated Anjan with no great effort and finally concluded, that it would be best to kill him, as an insane Makuta was a danger to the whole universe. Miserix’ laser vision destroyed Anjan’s armor and burned his essence
away.

Anjan wore a armor out of protosteel, but never carried any weapons, as noone would trust him with one and he himself saw the wisdom in that back in the days when his mask still worked.
The Mask of Sanity had no concious use. Rather, it passively kept order in Anjan’s mind and shielded him from every kind of psionic effect, as intrusion into his mind could have caused him to loose control or even made the intruder mad.

Anjan in theory had control over all the 42 Kraata powers, could create Kraata and absorb other beings into his substance. However, some of his powers wouldn’t work at all like mind reading or any kind of Rahi control (because of his mask that worked into both directions), and others would just be beyond his full control (pretty much everything that had to do with altering his body, for example he never had enough control over shape shifting to make his wings actually work). 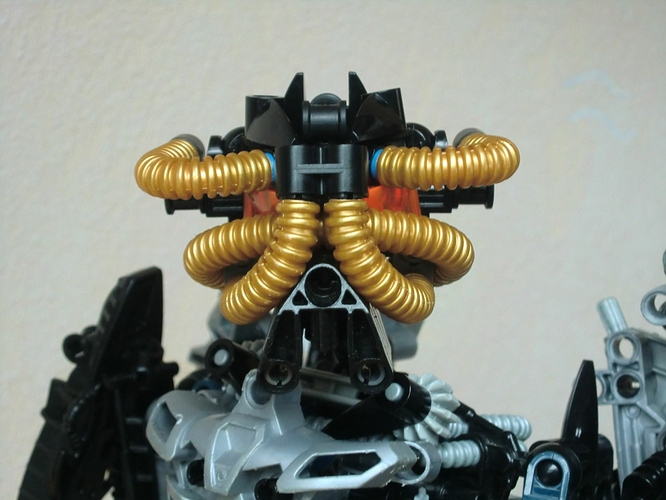 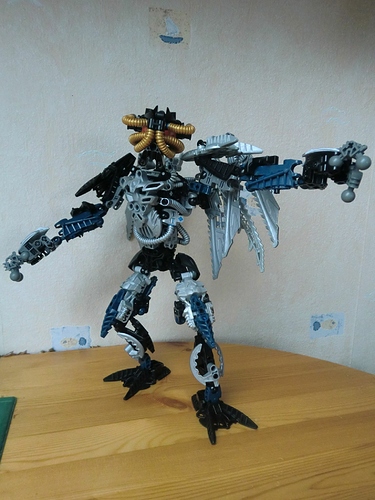 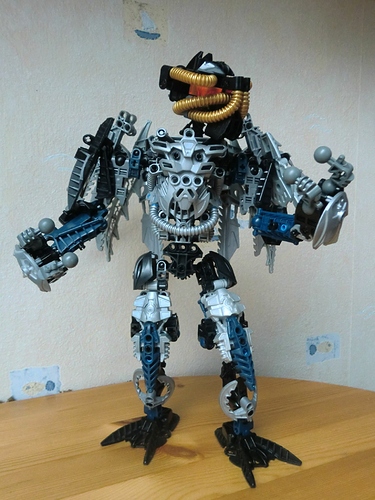 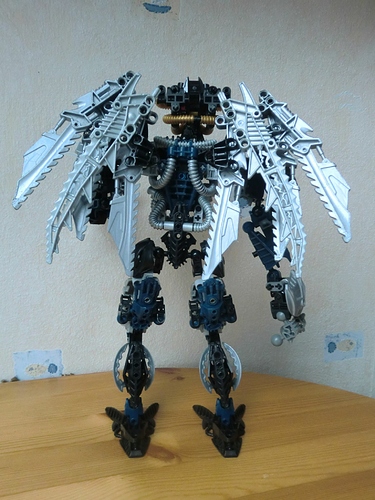 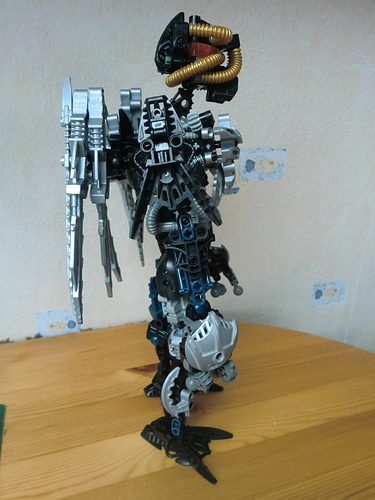 You know, after I did Mutran I never thought I would be able to do another Makuta - I just was lacking so many parts I usally use a lot. But somehow I ended up with Anjan’s head when I was just radomly moccing a bit.
He definately looks a lot “rougher”, if not jumbled in his texture, than my other Makuta, but I guess I still like him quite a lot. I had to use some … questionable (I guess) building techniques to get him together, but I hope this MOC is as much to your liking as Anjan is to mine.
Feel free to tell me what you think!

A little messy around the waist. Otherwise I like how different he is to your other makuta, and the communities makuta in the project you’ve started. 9.9/10

Hm… perhaps the tube wasn’t the best idea to cover at least some of the waist section, but I seriously have no idea what to do else.

That backstory is excellently written! He feels like a makuta right out of the deeper lore.

EDIT: Is this for the Brotherhood Community MOC Project?

EDIT EDIT: Derp, of course it is. Hi Gilahu!

This is great, I could totally see this being a set in 2006.

I love the head.

Thanks a lot! I always strive to embed my MOCs as good as possible into the G1 Universe and am glad to hear that I succeeded on this one.

Thanks! I just did this MOC because I came up with the head, so I’m glad you like it!

i really like this build ! and i think that the story behind it is really creative and interesting !