The Brotherhood of Makuta - Kaihodian V2 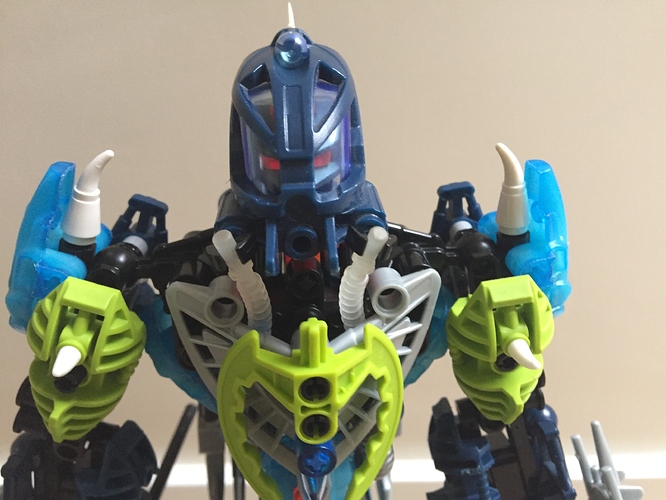 Story:
Kaihodian always had a fascination with the way Rahi lived in the sea. While originally tasked only with keeping an eye on sea Rahi and occasionally supplementing their populations, his fascinations became action when with a minor disregard to orders he decided to construct a hidden research facility on the floor of the ocean. He donned a great Faxon and utilized it as a means to more effectively study the larger Rahi and their full capabilities both as weapons and as tools to the Makuta and to himself.

He eventually died during the Great Cataclysm whilst attempting to close a leak of Energized Protodermis that opened below his facility. 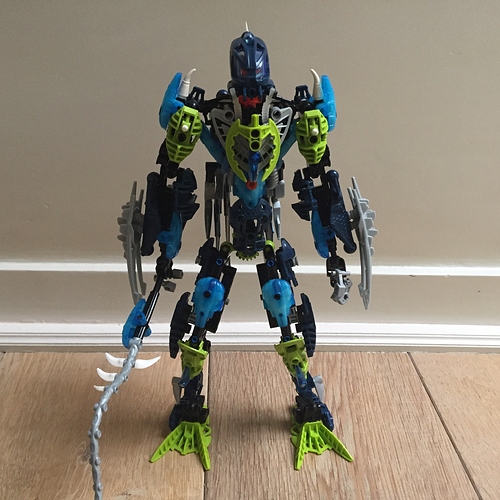 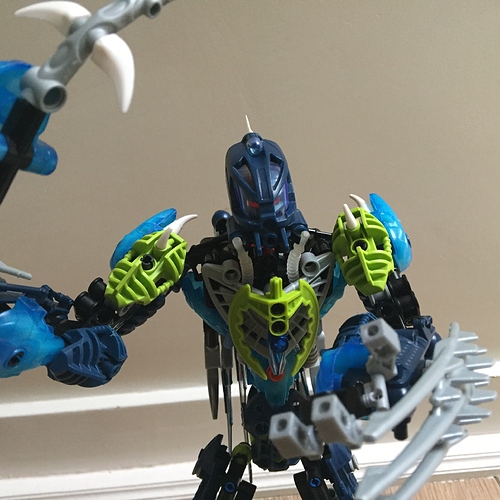 Equipment:
Kaihodian’s main weapon was the whip of ensnarement, this barbed whip could be used to ensnare targets from far distances and would give minor paralysis to those who touched the large spines on the base. Kaihodian affixed it to a spear as he found it a more comfortable grip. He preferred his whip as it allowed him to use underwater ambush stratergies to defend himself and finish battles quickly as his close combat fighting skills were not as advanced as other Makuta.

He also carried 2 protosteel clawed gauntlets as his secondary weapons, these were large enough that he could utilize them defensively if he had to fight in close combat. He wore a great kanohi faxon which he used to copy the powers of oceanic Rahi as to guard areas of ocean better, this mask had breathing equipment attached to it as well as lights and a visor that he used to see in the darkness of the ocean floors.

His armour, like his fellow Makuta was a near indestructible protosteel that contained his essence. 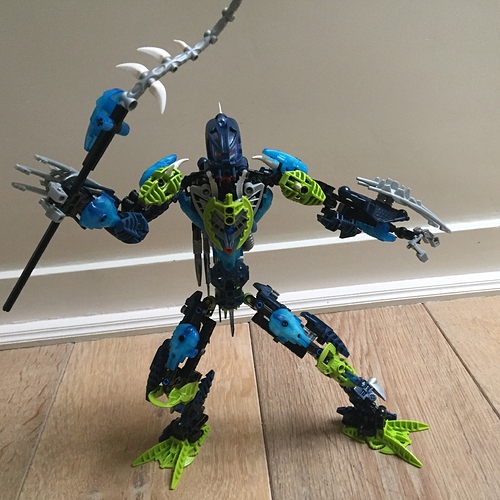 Powers
The typical 42 Kraata powers as well as Kraata creation. Kaihodian possessed great speed and agility in aquatic environments even without the use of his Kanohi. 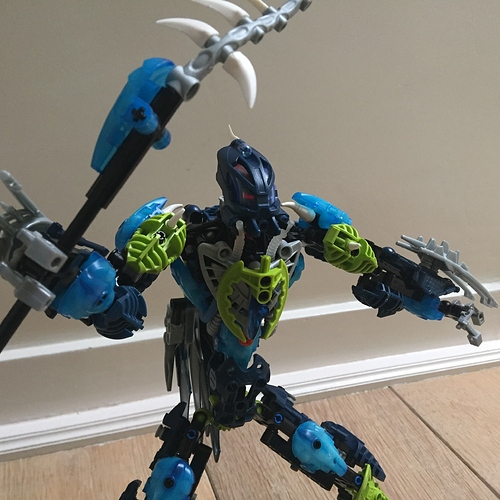 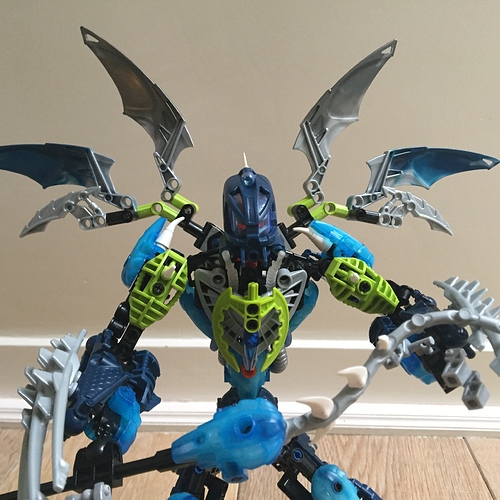 Link to the Brotherhood of Makuta project

Doesn’t exactly tickle my Makuta vibe or fancy my evil character receptors. But I really don’t think it’s bad at all. Kind of too similar to Hahli, to be honest. Besides that, I think I like the color scheme and the color distribution isn’t too bad. The build is very classical and I can dig that. Lots of complex-looking but actually simple connections in the whole thing. Kind of looks like a hibrid of the late-years Titans and the Inika build.

I just think Makuta deserve a more… intimidating presence. I would suggest making it feel bigger, not necessarily MAKE it bigger, but try taking the shots from a different perspective. - Top-down makes it look small. Build-wise, I think you could do some work on the upper legs and lower arms. They look a little bit low-effort compared to the lower legs, upper arms and torso. 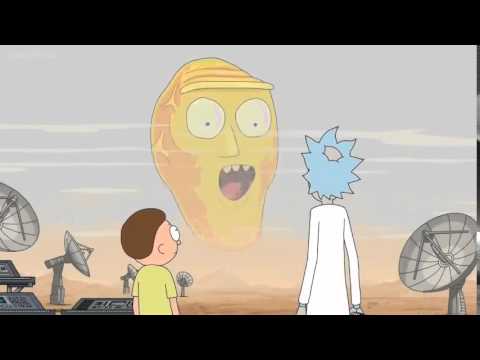 It feels more like a toa, but it’s still great.

Fair enough, I designed him to look more aquatic than menacing as his character isn’t really the violent more like an underwater version of mutran’s character. The build is basically a torso piece with lots of connection pieces attached so the armor and tubing could fit.

I’m considering a third version but i really need to look at the design, I have an idea for a double-piston-triple-joint-goat-leg-titan-style limb.

I really like the look of the torso and upper arms. Especially the chest with that Pohatu claw looks pretty neat. Although maybe the lower torso is a bit thin compared to the upper torso. Legs are better than V1, but I feel like those Visorak feet on the upper legs look a bit weird. The Piraka armor on the lower arms also doesn’t look that good. Not sure if I’m a fan of the use of Piraka arms on the lower arms, but for some reason I really like how those Ehlek claws look on them.

Overall a great V2! I actually think he looks more like a Makuta than V1.

I’m going to refine a third and final version because I personally dislike the arms, most of the armor is loosely connected and the piraka arms mess with the ball joint fixture. Visorak feet are going to stay I’m afraid and i’m working on the torso, I need to get a couple of things off bricklink (such as more dark blue pieces) then he should be finalized.

The armor seems a bit cluttered, especially on the upper legs and lower arms and the wings kind of seem out of place, especially if he lives underwater. However, the wings to give him more of a Makuta look and feel so I’m torn.

The upper legs and lower arms bother me as well, i’m working on fixing them and I think I’ve got a fix for the legs, I have to completely redo the arms though, the upper armor has very loose connections. The wings are going to be redone to fit into his character but also as a Makuta, hopefully it’ll work.