The Brotherhood of Makuta: Netrux 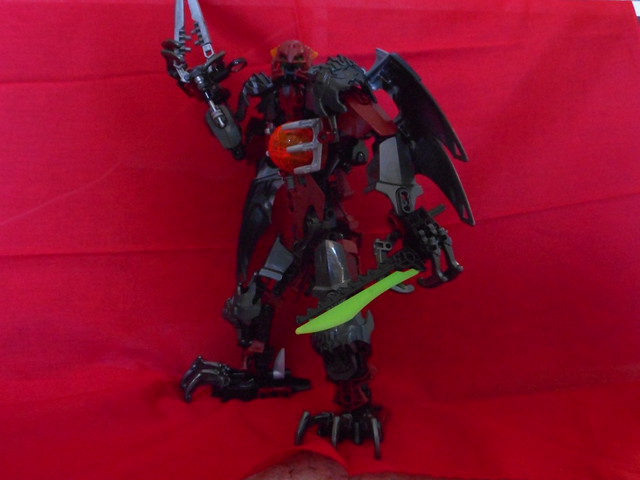 One of the last few Makuta to be created by Mata Nui, Netrux
was not assigned a specific region to create Rahi for. He was to travel around the Matoran Universe, and assist other Makuta in their projects.

Although originally resentful of this position, Netrux
excelled at it. Beyond simply creating Rahi, Netrux had a vested interest in
all the life-forms in the Matoran Universe. When he found something dead on the road, he would pick it up, take it to a nearby place where he could work alone, and dissect it in order to figure out how it worked. He created Kraata solely for the purpose of ending their lives in the process of becoming Rahkshi, in
order to see what they were like. He was especially interested in beings such as Toa that carried elemental power.

When Teridax heard of Netrux's unusual behaviors, he had him
reassigned to work permanently with Makuta Mutran. Mutran's unusual knowledge of the system of Mata Nui and his work creating Rahi, combined with Netrux's study into the systems of biomechanical beings, could potentially create a super-powered race - combining the powers and armor of the Makuta with the powers and servile attitude of the Toa. In other words, the perfect army with which to conquer the Matoran Universe.

The project began deep within a fortress on the Southern continent. Mutran kidnapped a number of Matoran, Toa, and other beings, and
tortured and mutilated them to collect samples of the cells and body parts that made them function. These, as well as other "elements" created with
protodermis and antidermis, were passed along to Netrux, who tweaked and arranged them into three prototypes of the super-soldier race - the
"Viperex". Although Mutran saw the project as a means towards the
Makuta's domination, Netrux had a connection with the "beings" he was
creating. This was in no small part due to his "assistant" - a
wandering Toa of Psionics named Gelisa, who he found could help form the psychology of the Viperex. He brought her into the project under the disguise of "Dalaeax".

Netrux was very proud when his first prototype was
completed, and presented to Teridax. However, when Teridax took the prototype with him to become equipped as his servant, Netrux lost his mind at the thought that his "creations" were to be used only as tools. He devised a plan to escape with Dalaeax and the two remaining prototypes - who he had, by then, given the names of "Xevach" and "Deaskuth" to - into the unknown parts of the Southern Continent, far away from the Makuta's reach.

His plan was not to be fully realized, however. Although he
completed Xevach and Deaskuth, they were finished hastily and became very sick. In order to survive, Xevach became a "full" Makuta, and Deaskuth became a "full" Toa, by taking all the antidermis of both and putting it in one, and the protodermis in the other, weakening some of their powers And while Netrux's beloved creations and assistant did escape the Makuta Fortress, Dalaeax was killed - by his very first creation, now a faithful servant of Teridax known as "Scourge" - and Xevach too captured and subjected to the Makuta. Deaskuth originally escaped the fate of the other Viperex, as he bore more of the Toa than the Makuta, but eventually he too was captured and physically transformed as an agent of the Makuta. Netrux's own end was to be brought before his two "sons" and murdered by Scourge.

Although there are rumors that, in a different universe, he is still very much alive, and seeks to reclaim his creations...

Like all Makuta, Netrux wore a suit of protosteel armor that
protected his antidermis body. As he was primarily a scientist and not a
warrior, his primary equipment was the tools he used in his experiments. His Surgical Claw could be used to finely remove parts from bodies or into new bodies, and could be acted upon by various Makuta powers to alter its effect on the surrounding tissue. He also carried a "Dissolutor" blade, which could, for a very short time, break apart the bonds in biomechanical bodies.

Netrux possessed the 42 Kraata powers, the ability to create
Kraata and absorb other beings or objects into himself, as all Makuta could. He possessed a modified Kanohi Kideli, mask of Heat-Vision. Although as a Makuta he had the Kraata power of Heat-Vision, his modified mask contained a more fine-tuned form of heat-vision, which he could concentrate through a lens to cleanly sear through tissues and machines. 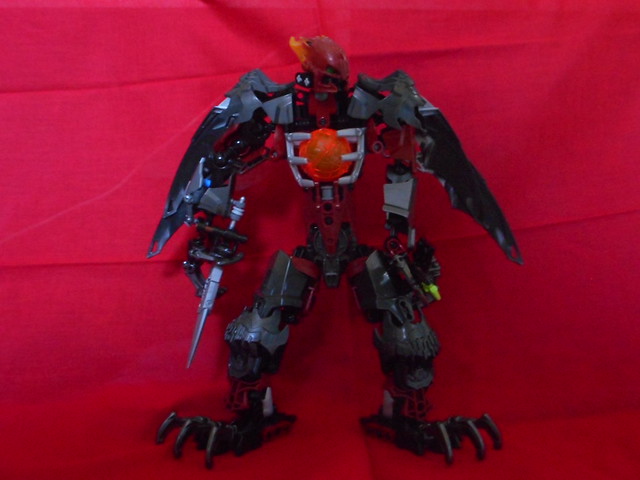 Netrux is a character belonging to X,
but like almost all of his characters I had some hand in his development.
Netrux was originally the "biological father" of X's selfMOC, but
since then has evolved into a creator/father figure. Zach has wanted to see my take on Netrux for a while, and with the Brotherhood of Makuta project I had the perfect opportunity.

The character has been built before, and I originally tried to emulate that version of the character, but ended up going in a direction I was more comfortable with. 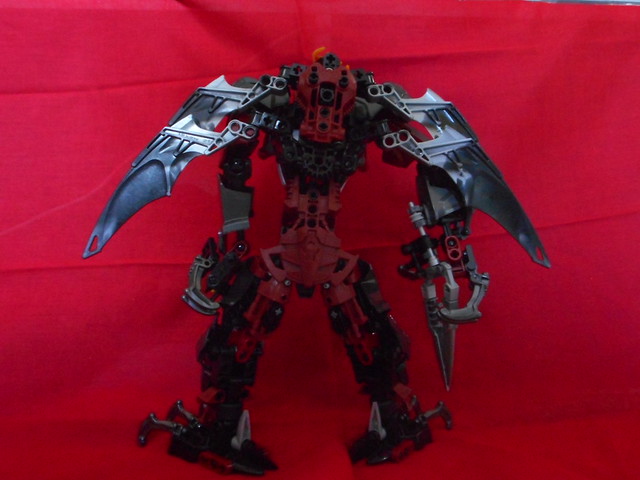 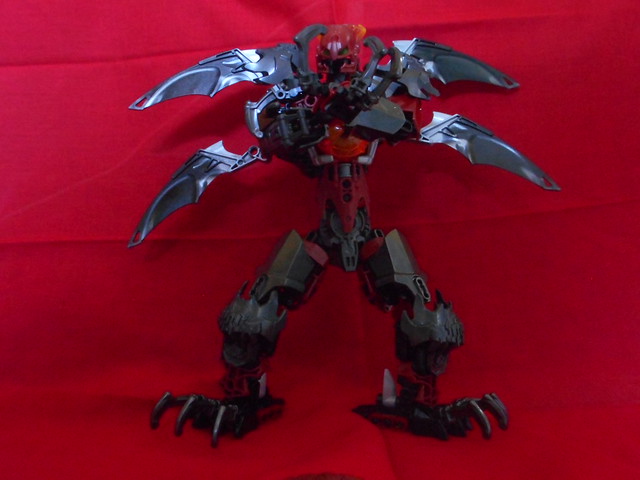 Good MOC, the color scheme of silver and gray with Metru red works very well and is distributed well. I love the way the wings are incorporated and the back design in general. However, there are a few cons.

The legs are a bit clunky due to their large and armored appearance in proportion to the rest of the MOC. The torso is a bit thin, especially with those huge wings, but I love the use of the Makuta Phantoka chest. The CCBS is, for the most part well included, but it doesn't seem to fit the feel of the MOC, particularly on the arms. The foot design is cool, but they're a bit large considering the size of the rest of the MOC.

Overall, I like it, but it has a few things that could definitely be improved. As a final note, I'd just like to say the mask choice is excellent, and I really like his weapons. Good job, this fits in right at home with the BoM project.

Tres guud. Never seen a Malum helm used like that before. I like the integration of the '08 Makuta Phantoka, really hits home that he's one of them. GG wud r8 8/8 I'm going to meme karzahni

As soon as I read "Mask of Heat- Vision" I started to think about how Makuta already have that power - until I came to his Powers. That's a very good explanation of why he would use this mask. His story is also interesting, although the names there have a little too much X's

As to the MOC:

He looks good. His feet are perhaps a little big and his legs a little short/his torso too long, but I can't really complain about that stuff, because, well, Bionicle are no humans and thus can have very different proportions.
I also can't say that I have seen Malum's mask on many MOCs, good choice! The four wings being fully seperated is also interesting.

Well, nice MOC, nice story. Thank you for participating in the Brotherhood Project!

I really like this, other than the green sword, the colours are consistent and well done. Great job!