Um… Could you please make your own topic for this? 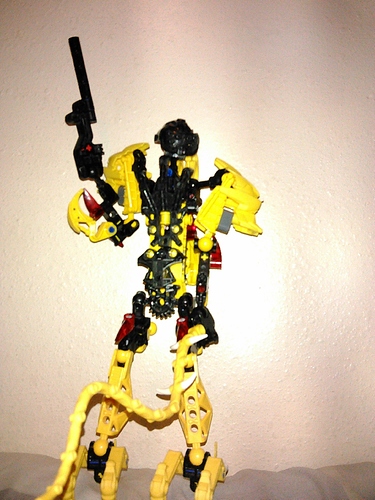 How does this look?
I call it… Uloki.

Okay, I now have plans for making 3 Makuta, 2 male and 1 female. Reserve these Makuta

I guess I’ll reserve my place and take a female Makuta.

I made a male Makuta.

Male Makuta, he always enjoyed making dangerous Rahi. He is rumored to have created the Sand Screamer, though this is unproven. He continuously challenged himself to make more dangerous Rahi, until the other Makuta feared him and he worked on his...

Well, I’ll (try) to do one. It may or may not get buried in all the other MOCs i’m doing right now

Since Gantil is going to be posted in a day or so, I guess I can take another male.

@P1gNinja
Please update pics just on your MOC’s own topic to don’t clutter this topic overmuch with pictures, thanks.

@LelouchViBritannia
As there’s no time limit, I’ll leave you on the list for now. Hopefully you will find time somewhen.

@TFM101A
Thanks for helping me out a bit here!

@AdamusTheFirst
I’ll note them down.

@Rac (and all those who want to participate)
Again, as we have plenty of Makuta left, that’s no big problem now, but please wait for an OK from me, until you upload your Makuta and imply, that he or she is part of the Brotherhood Project, thanks.
@Rac your Makuta is accepted.

Can I reserve one of the Makuta kept alive to make Rahkshi? No one has shown any love for them yet.

Sure you can. Male or female?

I don’t exactly understand this. Are there any Makuta left I could do?

The list above shows the different Makuta and behind them the persons who’re going to build them. If there is a ? behind the name of a Makuta, no one has so far volunteered to build him/her. Also “59” other male Makuta for example meens, that there are 59 male Makuta left to do, for which there is neither a name, nor a story, nor someone who wants to MOC them.

Or, to put it short, yes, there are Makuta left.

Male. Gorast was the last female Makuta by the events of 2008.

Gorast was the last female Makuta by the events of 2008.

This is the first I’ve heard of such a claim, have you the capability to verify?

It was in a book somewhere, plus it was on the Bionicle wiki. I know, wiki isn’t the most trustworthy, but I used it to prove what I already knew, since I couldn’t find the info on BS01.

It was in a book somewhere, plus it was on the Bionicle wiki. I know, wiki isn’t the most trustworthy, but I used it to prove what I already knew, since I couldn’t find the info on BS01.

I’m trying to find it again.

I didn’t know, too, but here’s what I found on the german Chronist Wiki after a bit of research:

and thus:
15 --> two other male Makuta, Teridax used to create Kraata and Rahkshi, before he killed them eventually

So there are two Makuta to assign.

@Rac
Thanks, that you pointed that out! After all we want to make the Brotherhood project as much canon, as we as mere fans can.

OK, so:
I can’t find the info in the three 08 books or Makuta’s guide to the Universe.
It isn’t in the serials.
I can’t get on BS01 at all due to a wiki skin issue, whatever that means.
I’m stuck.

Edit: using the Wayback machine, I confirmed the trivia was not on the BIONICLE site in 08.
Edit 2: I did find the info o Chronist Wiki, so there’s that.
It seems likely Greg said it.