I heard that it is in some sort of development.

There are a crapton of DCEU movies in development. This is merely just another one to heighten the pile.

It’s basically like this:
Marvel: slowly hints at movies and then reveals them with perfect timing, hyping them up at the perfect points
DC: “hey guys lemme tell you bout all these projects we got that haven’t even had characters hinted”

EDIT: I can’t be the only one that disliked Affleck as Batman. Who’s set to replace him again?

I can’t be the only one that disliked Affleck as Batman. Who’s set to replace him again?

I thought he fit the role better than past ones. The problems came from the people writing his Batman and designing his costumes.

I’ve never liked live action adaptations of Batman though. They’re always just super rich people who have a few fancy fighting skills and good connections. Comic/BTAS/Arkham Batman are rich people that studied EVERY facet of martial arts and also have an IQ that outmatches most people. Batman is called The World’s Greatest Detective, yet no live action film has even tried to accurately portray his Sherlock Holmes side.

He wasn’t the worst but he was more of a Bruce Wayne. Also a little old to me. I liked Bale tbh

Bale’s Batman was over-reliant on others, had average intelligence, and average physique. He was literally some guy in a bat costume, which is not who the character is supposed to be. More importantly, he lacked the psychological issues that most comic versions of the character always seem to have.

In an age where we can finally get faithful character adaptations, Batman deserves to be treated better.

They were definitely the best live action adaptations, but still nowhere close to things like Mask of the Phantasm and such.

Just got back from Shazam, and holy moly, it was great! It had so much heart, and some great surprises. Go see it, it’s worth your time!

Yes! Good, I’ve been hyped now I need to go.

EDIT: In my opinion, while the DCEU is very much imperfect and has a lot of flaws, we should stop comparing it to the MCU, and look at what cool stuff we’ve gotten from it. Let’s start from the beginning,
Man of Steel. A generally well-liked movie among superhero fans, especially those leaning towards DC, Man of Steel was enjoyable and showed us the most realistic portrayal of Superman we’ve ever had on the big screen. The childhood scenes showed realistic portrayals of how people, including Clark, would react to his superhuman abilities.
Next up we have Batman VS Superman. This movie looked great on paper and had its quality moments. It could’ve used a lot more buildup from previous movies, but instead they tried to cram it into the one movie. The actual BvS fights were great, though short, and I found lex luthor to have had a lot of potential. Again this movie should’ve happened later on in their universe, which very much hurt the quality, but it wasn’t bad considering the scenario.
And last one for this comment, Justice League. Not a great movie, but it introduced us to, in my opinion, a great Flash (haven’t watched the series, but I personally like Ezra Miller as Flash), Jason Momoa’s Aquaman, and a solid live action Cyborg. It also gave a hype-building post credit scene, and some fun action scenes.

we should stop comparing it to the MCU,

I mean, what else would we compare it to? It’s natural to compare similar things, and considering how the MCU and the DCEU are the most similar to each other, it makes sense to compare them.

I think it’s too different. They announced it won’t be as connected as they were planning after justice league flopped, DC is just generally very different, and their cinematic style tends to be different

If it’s too different, what else is there that’s more similar? It’s easier to compare the multiple interwoven stories that make up the DCEU so far to the multiple interwoven stories of the MCU than, say, the single story of something like Star Wars. Things will be different, but the core ideas are pretty similar, more similar than a lot of other things.

I’m not too familiar with it so I can’t say much of anything for sure in terms of apt comparisons, but I can say with a small bit of certainty that it’s likely that people will know about the MCU and DCEU instead of the DC Animated Universe. The animated universe is a collection of cartoons that, from what I remember, didn’t get the same scale of advertising to as large an audience as the movies from the MCU and DCEU get.

Probably, and it may be better as a comparison in some ways, but the fact that it’s not nearly as widely known probably makes it harder to draw comparisons people would be able to understand.

I’m a month late here, but… 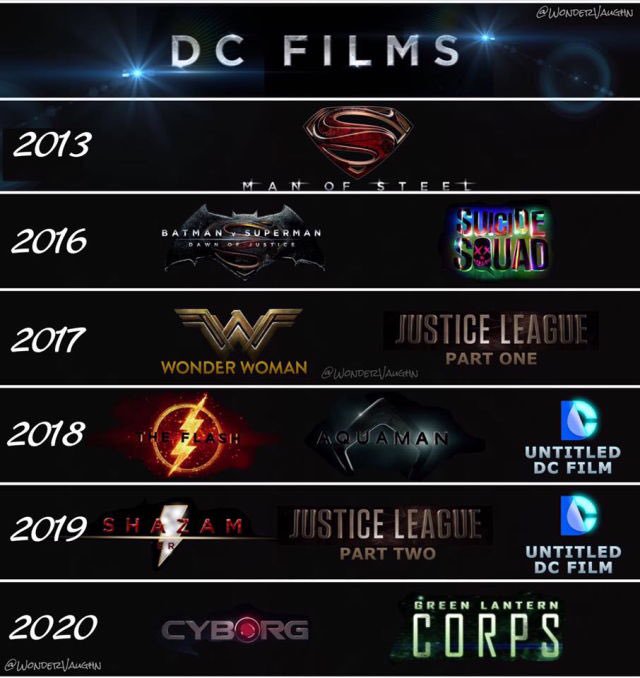 Well, glad to see there is a topic for this one…now I can talk about how excited I truly feel for Wonder Woman 84.

Like the way the trailer is simply made, it elevates the movie and gets me into a whole nother level of hype. I feel like, I’m more excited about this than the upcoming Marvel Movies just because of Endgame that marked the End of the original and probably the best characters we will ever get on the marvel scenes…I’m looking to you, Captain America and Iron Man.

I don’t know how to compare this but I feel like the Wonder Woman movies are now like the bread and butter of the DCEU. And it would really suck if they rebooted this all because Wonder Woman did great, and I currently watched it today and well, feel in love with the character. So I can’t believe that we are already in 2020 and June 5th is on its way to us.

I feel like for now that Wonder Woman is like what Iron Man is for the MCU or well was because of his great sacrifice in saving the universe. I’m just looking forward to this movie and I would happily discuss with anyone that shares the same enthusiasm that I have for this upcoming movie. It surely would be _wonder_ful.