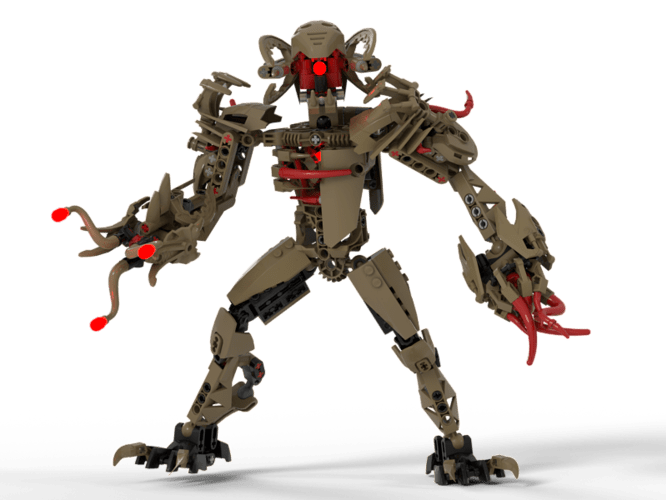 The Defiler800×600 310 KB
This guy was inspired by Nidus from Warframe. The idea behind him is that the Makuta were trying to create some sort of “super” rahkshi by submerging the Poison, Hunger, and Plasma Kraata in the energized protodermis at the same time. What ended up happening was the Kraata fusing and manifesting a fully organic creature of disease and death. Such a creature came to be known as The Defiler as it has no other purpose than to blight and defiles all that is pure. (More pictures will be added soon) His right hand is inspired by the Hema gun from warframe which takes damage dealt to enemies and converts it into health. I swapped the drain out with his opening chest and made his (for lack of a better word) “Hema hand” a bile launcher. The other hand is a mass of tentacles with a connection point for a blade on the palm of the hand. 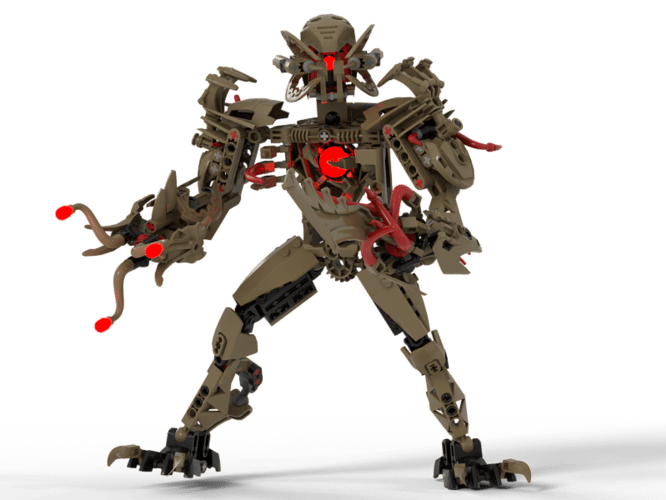 Hema Hand open chest800×600 307 KB
His head doesn’t actually have a mouth. The exo force arms and pohatu hooks just cover up his fleshy weak spot and eye. Now that I think about it The Defiler is almost like the creature from The Quiet Place as far as the opening parts and fleshy inards go.
29 Likes
Winger August 12, 2020, 2:14am #2

So my conspiracy theory about Azog surviving Darth Maul-style is confirmed!

I guess so lol

Cool style and concept. Nice work with assymetry, but I personnally would have addaed more. Where from are those Noble Jutlin?

The Noble Jutlins are using custom colors. They don’t actually come in tan I just colored them tan to match with the rest of his body.

This is weird to me because I’m in the middle of building a moc that also was based on nidus. I see we both had the same idea at the same time

Oh so you built that moc? I have seen this a while ago on Reddit. Great job on that my friend. I really like the eldritch vibes its giving off.

Where from are those Noble Jutlin?

The Noble Jutlins are using custom colors. They don’t actually come in tan

But where did you get the stud.io model from?

I would actually really like to see this as a real figure even though those parts don’t exist in that color commonly.