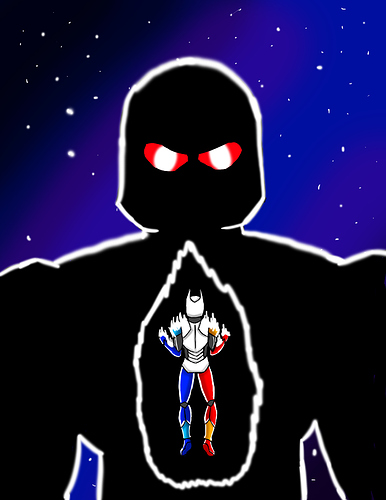 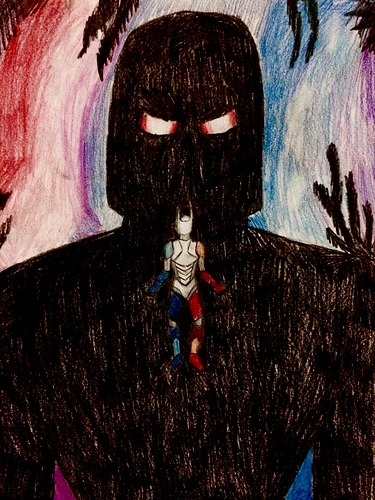 C5F1CB36-2FBF-498C-BF18-86A7AE52EE7C.jpeg2448×3264 1.94 MB
Suddenly, a chilling cold pierced the toa, the likes of which even Kopaka had never endured. An invisible, crushing force took hold of them, restraining them in place. They were not alone in the void. They felt a presence that seemed ancient, older than the great beings, maybe even as old as time itself. A towering, pitch black figure loomed ahead of them. “Go home, Toa,” it said in a booming whisper.
“Your gods have no power here.”

This was inspired by the latest Brainstorm episode, in which someone mentioned that they loved the idea of the Toa Nui fighting extra-dimensional cosmic beings. Maybe the above scene is a confrontation in the far future. Maybe it’s an ominous vision they have if they try to look too far back in time with the Vahi. Who knows? Anyway, the towering behemoth could be G3’s Mata Nui, or it could be something else. The Toa Nui is based on @FuegoDeCera’s design.

I wouldn’t really see Mata Nui as a villain, which is the kind of vibe I’m getting off of this. I could be wrong, though.

I was going for more of a complete neutral. He could be warning the toa, or threatening them. If he’s the father of the great beings, he may be ticked all of his sons are dead.

I was going for more of a complete neutral. He could be warning the toa, or threatening them. If he’s the father of the great beings, he may be ticked all of his sons are dead.

That’s a very good point, actually. Let’s hope the TTV make him a thing in G3

i actually like it more that G3 Mata Nui is not like his G1 version, and is instead a tyrannical, vengeful dark god. the type who smite people if they don’t present him tribute when he demands it. The type who causes natural disasters to happen to the mortals just to amuse himself. The type who rules over the cosmos with an iron fist and is incredibly paranoid of those who would usurpe him.

I would like to have that be the big reveal if the Toa try to revive Mata Nui.Only to then later learn that there was a really good reason for why he was put to sleep.

I would also have liked it if the three brother were the ones who put Mata Nui to sleep in the first place. It would really make one think would it not?

If Mata Nui becomes canon, I don’t think he should be evil. That seems a bit too disrespectful to the source material of G1. It would be like if Makuta was made into a wimpy coward and avoided all conflict. I’ve made a pitch on Mata Nui and the Brothers which keeps the Brothers as antagonists, although much of the lore probably won’t work with the current canon.

i don’t think its “disrespectful”, plus i like it better to have the three Brothers actions have meaning than possibly implying that they wanted power for themself.

But do you wanna know the best part of this?

one can do both.

The three brothers overthrowing their cruel father to not only bring their own rules to the cosmos but to also gain his power. Any old tales about Mata Nui being a dark god is lost or forgotten because Mata Nui’s cruel rein made the mortals craft false legends about his out of fear of being smited by him, because Mata Nui was that kind of god, so anyone who portrays him in a bad light would suffer his wrath. So then the Toa would have no idea what Mata Nui is really like, infact no one would. Which would be one great twist on the G1 awakening.

The problem with that is that Mata Nui was asleep when the world was being created. Artakha is his coffin, basically. I doubt any matoran would know who Mata Nui is.
To be honest I really don’t like making him evil. It just doesn’t seem to fit and would actually be a bit clishé, the way I see it. It’s the same as making Ekimu evil, him being incompetent and a disappointment in the Toa’s eyes seems much better than him being a hero.
Mata Nui just looks as an all-powerful god. Not a cruel and evil one.

I mean disrespectful in the sense that it changes a valiant guardian of the Matoran into a bloodthirsty tyrant. If G3 makes him neutral, in the sense that he shows both love and wroth depending on a person’s actions, that would work a lot better. That way, if Mata Nui is angry when he is awakened, the Toa have a chance of talking him out of destroying the world.

the lore you wrote about the three brothers all being villain in a way aid the reveal of Mata Nui being evil, because not many of the viewers would at the point when all three brother’s sins have been reveald, would belive much of what they say then, especially when the story that is presented at first makes it come more of as three greedy and selfish brothers overthrowing their kindhearted father in order to gain his power… When in reality it was three brothers who, wanting to have their turn at controling the cosmos, overthrew their dictator of a father.

Simply put, all of them are horrible rulers of the cosmos, but compared with their father, the three brothers are atleast a lesser evil.

What I wrote in the pitch is that the Brothers are usurpers. It’s not meant to be told by the Brothers to the Toa; it’s meant to show what actually happened. The Brothers would never reveal the existence of Mata Nui for the purpose of staying in power.

With @Sabretooth’s pitch, it leaves enough ambiguity about Mata Nui, making the Toa unsure of his good or evil. This can be a very good element for someone like this, only showing the tip of the iceberg and leaving room for speculation.

With @Sabretooth’s pitch, it leaves enough ambiguity about Mata Nui, making the Toa unsure of his good or evil. This can be a very good element for someone like this, only showing the tip of the iceberg and leaving room for speculation.

what i meant was that to us, the viewer, the three Brothers would seem like what they may say about Mata Nui may be lying. It would be like when Teridax in the Mask of Light movie said that Mata Nui’s slumber “spared him of pain”. But there would also be some hints that maybe, just maybe, the three brothers may be telling the truth. But again, we would have no knowledge of that for sure. And if the brothers would try to warn the toa of Mata Nui, in my mind, it would happen when the Toa allready know that Mata Nui exist.

I guess it depends on the point of view. To the Brothers, Mata Nui might be a tyrant, but mainly because he’s their father.

after some though, i am willing to tone down the evilness of Mata Nui, and instead have him be still a tyrant… but one who belives that his iron fisted rule over the cosmos is for everyone’s best. This would be why there could be legends of him being a benevolent god, because its what he sees himself as being.

so again, he would be a tyranical god… but not one who destroyes people’s lives for amusement.

I can see that, and maybe he is a mix of all the Brothers’ traits; he believes in free will, but he wants everyone to submit to his authority and no one else’s (which makes sense, and is somewhat reasonable, considering he made them). Not sure how Karzahni’s personality is before he went mad, unless he was obsessed with learning. That might tie to Mata Nui’s omniscience.

It could work, he could be given a similar personality to G1 Velika. Greg was once asked what would a parallel universe where Velika succeeded in taking over the MU look like.
He said it would be some sort of fascist dictatorship, as Velika believed “Everyone should obey [the great beings] as [they] know the best”

I Wasn’t thinking good or evil, just kind of… there. Like the One-Above-All from Marvel. Maybe he’s grown bitter towards existence, with his sons dead and lots of evil in the universe. He’s turned his back. As a result, what if the toa have to persuade him to help them, or something.

I Wasn’t thinking good or evil, just kind of… there. Like the One-Above-All from Marvel. Maybe he’s grown bitter towards existence, with his sons dead and lots of evil in the universe. He’s turned his back. As a result, what if the toa have to persuade him to help them, or something.

That’s an idea I can get behind, creation trying to win the heart of Mata Nui to save the universe.

I have updated the original piece to better reflect my current skills.