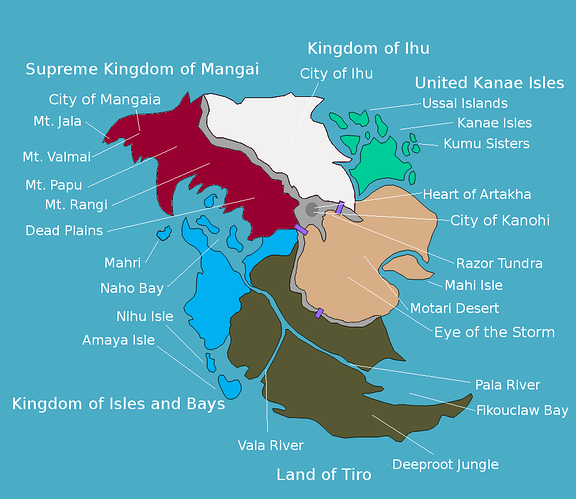 This topic will be dedicated to the Kanohi Period (as suggested by @AntrozT6), a canonized period of time in which powered masks were sealed away by the Toa. This topic will be a pitch as to how it could happen. The following are points of reference:
Toa Kanohi, Barraki and Mahri Nui, Kanohi (City of Masks), Kanohi Dragon

#Kanohi Era
The Kanohi Period is noted for the time in which the League of Six Kingdoms reigned over Artakha with an iron fist. After being summoned, the Toa Kanohi were charged with defeating the League and sealing away the Kanohi Masks.

##Early Years
The beginning of the era was marked by the construction of Kanohi, the City of Masks after the War of the Brothers ended. The city was renowned for the forging of powerful weapons and armor enchanted with an unknown power, but it was their construction of masks that made the city so legendary. Kanohi Masks were noted for their enhanced stability when compared to other devices, such as staves, weapons, shields, and armor; thus, it was named the City of Masks. Due to the success of the Kanohi Mask, masks became much more popular than previously, resulting in the entire culture of Artakha being changed. To this day, the mask is considered the quintessential piece in a Matoran’s attire.

##The Warlord Period
The Warlord Period is marked by the advent of the League of Six Kingdoms, a council founded by Takadox and including Kalmah, Ehlek, Carapar, Mantax, Pridak, and Nocturn (who took direct orders from Takadox). Each warlord obtained their throne through foul means, either by usurpation or deception (Pridak as an exception, being a legitimate heir).
Kanohi, the legendary City of Masks, was well-established following the War of the Brothers. When the League came to power, they seized the city, using it as their headquarters to restrict the flow of Kanohi Masks, going so far as sending their armies to seize them from the people. Using their ill-obtained masks, they created the Kanohi Dragon, a reptilian monster of then-unknown origins that wore armor fashioned out of Kanohi Masks. This monster was one of the most powerful living things to ever roam Artakha, nearly rivalling the combined power of the Toa.
Seeing the corruption of the League, the Nuva summoned the Toa in the form of Lhikan (a wayward adventurer), Tuyet (a noble warrioress and former student of Axonn), Lesovikk (a timid hunter and student of Keetongu), Zaria (a skilled athlete), Jovan (a well-known temple builder), and Krakua (the sister of King Pridak). Forming the Toa Kanohi, the Toa began to rally the people to their cause, which resulted in backlash from the warlords.

##The Decline
The decline of the Kanohi Era was ignited during a meeting the Toa had regarding the existing Kanohi Masks. Lhikan precided over the meeting, while Jovan, Zaria, and Krakua advocated for sealing away the powered masks, to prevent such a catastrophe to occur again. Tuyet, defying the duty given to her by the Nuva, stood alone in wanting the masks to remain in the hands of the people, arguing that sealing the masks away was akin to what the League had done. Lesovikk, too timid to argue for or against the idea, remained silent despite agreeing with Tuyet. It was decided that the masks would be sealed away in secret vaults, known only to those who built it.

The only thing that I dislike is the defeat of the warlords; each one ends up defeated with no real change in the structure. It would be more interesting if the warlords perhaps worked together to fight the toa instead of individually engaging them and getting defeated. Also, what would happen if one of the warlords defeated the toa in battle? Then you would have a battle in order to rescue that captured toa, etc. and overall it would lead to a slightly more interesting plot. Heck, you could even have one of the Toa Kanohi die in the war, since everyone but Lesovikk ends up dying anyway.

War details changed with Jovan being captured, description now includes The Battle of the Deep

Well, it’s the fact that the Warlords are individual and don’t want to work with each other that ends up in them being defeated.

When I finish a story about every warlord, I plan on making a story about how each of them fell. I already have Takadox’s very nicely pitched-out, aswell as Mantax’s.

Interesting idea about the death of a Toa nontheless, if I had stronger ideas for Mantax’s, Carapar’s and Ehlek’s chapter, It’d be much quicker, but I got into a writing slum with Ehlek’s chapter and his dialogue, which I really want to be great. Either way, I will try to work on it, and there is something big, and interesting coming, I promise!

@Bokarda by the way, Pridak was never a co-leader of the League, he was secluded in Ihu, well, as everybody else. Nobody was technically the leader, because everybody just agreed to keep a tight peace and that was it.

Updated with map of Artakha circa Kanohi Era

This is really cool. Are you and @AntrozT6 working together with the whole Barraki storyline? If so, that’s just awesome. Man, I love Barraki…

Yeah, I saw his Barraki pitch and got inspired to come up with the City of Masks, and it grew from there. We’ve collaborated on it ever since.

I would love to help, but all of my previous ideas contradict yours’ heavily. At least, my Barraki ideas.