In difficult times with a mad great being running around killing everyone, there are unlikely alliances. Here is my custom team of allies. Formed of two Toa, a surviving Makuta and two members of unknown species. 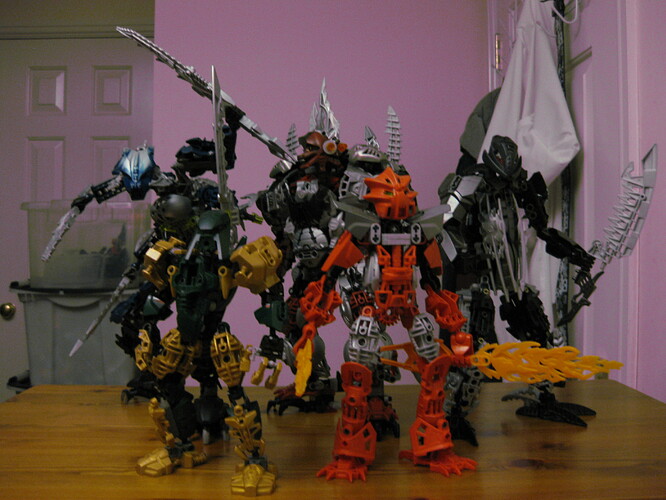 The leader of the team, Malakai formed the merry band (with great difficulty) to try and survive the conflicts going on currently. Originally serving the purpose of merely serving the Agori villages, Malakai snapped in a fit of rage one day after being injured severely, resulting in the deaths of 400 Agori and his inevitable exile. Many years later, he still promises to pay Raanu a visit, and at last get his revenge. Nowadays, Malakai is a very well known warrior and engineer, he is known for leaving no bodies behind and his custom scope, used to track micro fractures in armour.

Not much is known about him, but it is rumored that because of his knowledge of Terridax’s plan, he was able to avoid certain death in the swamps of Karda Nui. He only has one regret, not killing his ruthless leader Icarax before. His fighting style consists of horrifying his opponents with nightmarish visions, before swiftly finishing them with his blade.

The murderous psychotic monster inside the four armed body is not to be messed with. Possessing the ability to track down his enemies expertly and regrow lost limbs, Skakruk is a force to be reckoned with. They say his stare is like a thousand lave eels crawling under your armour. To bad nobody has lived long enough in his hunt to find out.

The former leader of a legendary team of Toa, Damarus was shunned by many after a catastrophic failure resulted in the death of most of his team. His form of combat is a strange one, consisting of only the use of his elemental powers and no tools or weapons for defense. He still wears his armour given to him by the most talented Matoran, as a reminder of his glory days. Now the armour slowly fades in colour, with his regret building up each day.

Komek is usually quiet and reserved in between battles. In the middle of a heated fight, he is a completely different story. He becomes a raging motormouth with multiple personalities and a wide range of fighting styles, adapted with his fire sword skills, which he gladly demonstrates on enemies. Because of this, Komek has accidentally killed a few of his foes in cold blood, causing him to be more feared by the Matoran he swore to protect. Nobody knows what is more scarred, his body or his mind. He is now a member of this group, as he has nothing left except to find meaning in death.

malakai is exellent
the body of the makuta is odd
Skakruk has cool legs and nuvaboobs
jk
toa damarus is lissovikk(backstory) with a cool custom torso
i like the red guy but either move his head down or his shoulders up
edits:
i think you would be better off if u worked on the others as much as you had worked on malakai; Skakruk has nice feet

Skakruk seems to be the one

Nice! I’d read a story about these characters.

a unique and special team with uneasy alliances. Love it

These Mocs look very nice along with interesting Bios!

Any reason why you made Malakai so ridiculously armored up? Not that it’s bad, it just looks a tad bit jumbled up…

I made him first, and spent the most time on him.

I also wanted to go for the big savage warrior look.

I can’t help but love these.

I wouldn’t say they’re perfect,
but I love the designs.

Quite unique and interesting. There’s a lot of love behind these MOCs.

not to seem… well, forgot the term, but ever considered a female member? Actually, have you ever made a female MOC?

I was actually working on a female moc. I’m not too sure how I’ll do it yet.