However mad you and I may be about the destruction of the old EU, there is still a new canon. I never got into the old canon all too much although I plan to eventually, but I’ve started exploring the new canon, especially the comics like “Vader” and “Star Wars,” so far I quite like it, but what are your thoughts on the new “Expanded Universe?”

I like it more than the old stuff.
Far more, it’s so much more sensical, and, in my opinion, cooler.
(Hides in bunker)

I miss the old grevious comics

Well I’m pissed that a bunch of good characters will never be brought back.

I think all the stuff they are doing definitely makes sense, but I think, so far they haven’t explored completely original time periods and characters so much, but rather, they play it a little safe and rely on pre-established characters. I want to see more Old Republic stuff like KOTOR. I still really like it, and the new characters like the droids in “Vader” are amazing.

It’s actually concise and references to the EU’s most beloved parts are being made.

Burn him at the stake! /s

When Disney bought LucasFilm I got worried, because I knew they would milk Star Wars for all it’s worth and then some. When Disney announced Clone Wars was ending I was crushed, but took solace in the fact that the same team was making Rebels. When Disney announced that the EU was no more, I was furious. I’m still mad. Thrawn was no more (thank goodness for Dave Filoni), the Republic Commando stories didn’t count, and countless other characters, cultures, and other rich, rich mythology was swept away. I’ve been a Star Wars fan since 2003-2004ish. I spent years learning everything I could about a galaxy far, far, away and taking pride at being able to answer ANY question a random person might ask and give an answer that would probably confuse them. To have 85% or more of that knowledge suddenly become useless infuriated me.

Now, so far I haven’t had too much of a problem with the New Canon. The vast majority of it has been great so far, with the only exception being the mess that is Heir to the Jedi. I haven’t read ALL the comics, but what I have read are pretty great, and all the other novels have been pretty good too. If you want my opinions on Rebels, go to the topic just for it. Some people might find The Force Awakens disappointing, but that’s only because they had their expectations set way to high. I was always worried about that film, so what we got I was very happy with (except Ben Solo, 'cause that doesn’t make any sense). I’m very excited for Rogue One, even more so than I was for VII, and the Ahsoka novel comes out really soon, so that’ll be fun. And Thrawn is canon again, so that’s one less thing to complain about.

I do miss the EU and the stories it told. I’ll never forget characters like Kal Skirata, Darth Revan, or Mara Jade. I’ll never forget the fantastic stories it gave us, and I certainly won’t forget the cultures it made (kandoshii mando’ade). That said, as much as a despise Disney for all they have done, the LucasFilm story team has been doing a pretty good job so far.

If you haven’t read it yet, Lost Stars is a pretty great new canon book.

It has some great characters and a pretty interesting plot, although the romantic portions are at the very least cringeworthy.

romantic portions are at the very least cringeworthy

Precisely why I haven’t read it

It honestly isn’t bad though. You just have to turn off your brain when you reach them.

Oh, yeah! I can’t wait to read that one. I wait for the books to release in paper-back 'cuz it’s cheaper.

I really do like most of the new canon. Really Dark Disciple is the only sore spot.
Clone Wars and Rebels have thier own discussions, but rock.
Tarkin was really good.
Aftermath is underrated.
I loved the Obi-Wan Journals of the Star Wars Comic.
I want to pick up Lost Stars and Bloodlines.
I cannot wait for the Ahsoka and Thrawn books.

because I knew they would milk Star Wars for all it’s worth and then some. 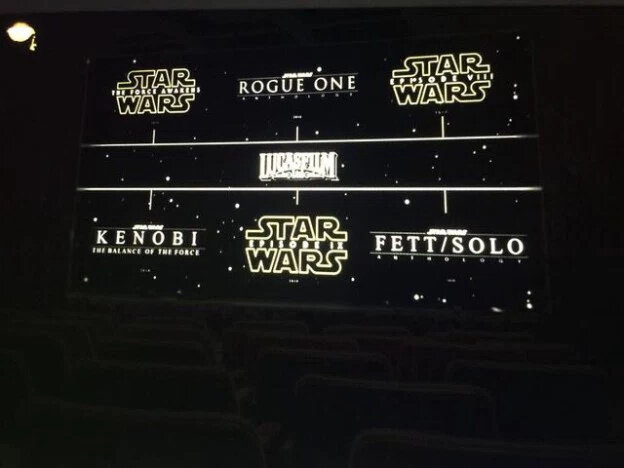 SW is gonna become another silly spam of sequels.
I still like the new canon though

SW is gonna become another silly spam of sequels.

SW is gonna become another silly spam of sequels

What is this, Marvel?

So, way too many, but they’re still good.

If Disney expects every new Star Wars film to have the same box office returns as The Force Awakens, they’re nuts. They’re going to over saturate the market with Star Wars film, leaving it to where less people are going to see the main films and only the hardcore fans will be seeing the standalones. I said the other day (out loud, not online) that after the third standalone they need to take a few years off and let the public build up interest again. But, then Disney said they have another movie planned for 2021, which is after the final standalone. Disney is going to run this franchise into the ground.

Yeah I’m scared they’ll run it into the ground with movies, so I hope they take a break at some point, but Marvel seems to have been doing good and the star wars brand is more powerful, so it has to be at least profitable for Disney. If the movies are really good, but their sales start to decline that doesn’t bother me too much although I hope Disney would have the wisdom to take a break

Yep. I think Star Wars is a franchise that is just so renowned that it can’t ever be super bad, at least not in the near future. Despite how many sequels it gets, they will be good to some degree, just like Marvel. But like Prentice said:

Disney is going to run this franchise into the ground.