I talked to a new person today!

I’m gonna keep this brief. I’ve been doing a program called Running Start, essentially being able to take college classes during highschool. Going to the local campus and everything. And of course this means meeting a whole bunch of new people. Of which I’ve tried socializing with a few. Most didn’t go far, but in the last couple classes I’ve been talking to a girl and we’ve been getting along super well! What with plenty of time to talk before class and a lot of shared interests. So I feel like this could very quickly develop into a good friendship.

Also, keep in mind this sage advice from the Red and Green show. 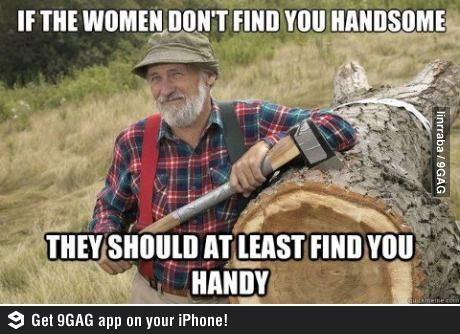 Alright, so I’ve got a bit of a story…

I have a really good friend who is/was dating someone. We are both in high school, at a time society finds dating acceptable, though neither of us had dated. Two years ago, my friend was super against dating in high-school, and I was kind of lax about it. Two of my other friends were dating, and it wasn’t annoying, even though both ended poorly.

However, now, my friend was constantly pursuing who-knows-who. It felt like he had a new interest every week. It became a running joke that he would always be around girls, even when it meant his “Me and” was missing “the Boys.”

Eventually, he actually started dating one. At first I was happy, but I realized just how little I had been seeing him, and it was only getting worse. Any time it was the two of us, he was talking about her. It didn’t matter if it was 1:00 and I wanted sleep. But I let it happen. I didn’t want to intrude.

But that’s not where it ended. Not only was he no longer hanging out with us and now pouring all his time away from his family and into this relationship, he needed something pouring back in. The fact that her friends weren’t the best of people rubbed off on him, and he kind of became a worse person. A person even he didn’t like being.

He was in the wrong crowd. I’m not saying he had to be in our crowd, but the way he was acting and treating his friends and family were not commendable. I felt like he only want to talk with me as a formality. And so, the Boys shrank one member.

I don’t really know what happened, but something did. He sat with us one lunch, and I guess what seemed like a normal lunch to me (I was just playing the new Tour in Mariokart) kind of reminded him what it was like around us. Around people that wouldn’t turn him into someone he didn’t want to be. Anyways, I heard a rumor that he’s taking that to heart. That he’s going to make some changes, and I’m all for it.[/details]

TL;DR? I’m okay with high-school relationships. I don’t get the point other than to perhaps best your image to your peers or to yourself, but then again, I’ve never dated. But in my experience, I have seen a lot more cons than pros. Three out of three of my friends’ relationships have ended poorly. You kind of forget the Boys because you’re with your Girl. As adults, that’s normal. That’s fine. But as high-schoolers? I just didn’t want to lose my friend, and that’s what I felt like was happening.

My love life is like reading David’s Psalms back to back. Everything is fine one moment, and then takes a nose dive in the next part.

It was another dream. I met the cutest freckle faced redhead girl. She was clever, and funny, and she cared about me.

I think I met her! I know I’m gonna sound crazy but I was just about to go to sleep when this dawned on me. It’s like 12:30 AM right now and I just need to blurt this out.

Okay okay, so let me explain. Last Thursday I talked to a new girl in my english class. See, we’re starting a Sci-fi unit, and the day before I had off handedly mentooned that I had a story series I was working on. The next day we were doing a group assignment, and I just so happened to get in a team with this girl named Sarah. She actually took interest in what I said, and asked me about the series I was working on. The fact that she initiated the conversation, and about something I had just casually thrown out is all super exciting in and of itself.

But it just dawned on me that she looks like the red haired girl from the dream I had two weeks ago! Granted they don’t match up perfectly, and I can’t quite remember either of their faces at the moment. But there are a few specific details that are startlingly similar. And not only on a physical level. I think their personalities and voices lined up a fair bit too.

Does this mean something? Or am I just going crazy? This has to be more than just a coincidence right? Please tell me what you think.

This has to be more than just a coincidence right? Please tell me what you think.

Could be the real thing. It could be God saying, this is the one. All your previous disappointments could have just been God telling you to wait. Good luck man!

Does this mean something? Or am I just going crazy? This has to be more than just a coincidence right? Please tell me what you think.

Once again, I think you should keep it cool and just generally try to get to know her further.
It almost seems too good to be true, just like your other… encounters.
But then again, all my friends seem to be doing well in finding a special person, so…
Maybe it is. I think you should wait and let it play out.

Once again, I think you should keep it cool and just generally try to get to know her further.

That’s still a hundred and ten percent my plan. Admittedly I have been thinking a lot about the possibility of a romantic relationship with this girl. The thoughts are hard to avoid. But I’ve kept myself from growing any real romantic attraction just yet, since that’s what does all the damage in the aftermath.

Even if nothing romantic comes out of this I’m just really happy to have met her.

Just don’t mention the dream thing until MUCH farther down the line okay? Don’t wanna creep her out.

Oh definitely. That’d be a really weird thing to bring up before we’ve really known each other for a month or two.

known each other for a month or two.

Or even that long. Maybe never. I would refrain from telling her unless you have to. Or you feel like it’s the time to do so.

God’s silence is a profound mystery that has spawned endless theological speculation, destroyed the faith of many, strengthened the faith of many others, and has generally been seen as a primary attribute of God in the post-Biblical age, either because He’s already said everything he has to say, or because He doesn’t exist. Going with the “He does exist” option, do you think He’s going to break that silence to tell somebody there’s a real nice girl he might get along with? Is one ordinary person’s love life likely to be so critical to the course of history that God feels it imperative to intervene directly, when he never does any such thing to stop wars or bring people to faith? Even if your answer is “yes,” assuming that she’s “The One” (something which almost no one ever finds, if there even is such a thing) because of a dream is a questionable decision, because:

Interpreting dreams is a risky business. Again sticking to a traditional Christian view: Biblical figures like Joseph and Daniel had to be given a divine gift of interpretation to make sense of dreams. We modern people who altogether lack such gifts have no way of knowing even where a dream comes from (God? Demons? Our own mind, by far the most probable explanation?), let alone what it means, if it does in fact mean anything.

None of that is to tell Maximus not to pursue the girl if he thinks she’s cool. But assuming that someone might be your divinely-appointed soul mate, especially because of something as woefully unreliable as a dream, is likely to lead to frustration and pain.

None of that is to tell Maximus not to pursue the girl if he thinks she’s cool. But assuming that someone might be your divinely-appointed soul mate, especially because of something as woefully unreliable as a dream, is likely to lead to frustration and pain.

No worries. “Folk theology” as I call it is something that pushes my buttons. But I probably should’ve realized you were speaking extemporaneously and not dropped a wall of text on ya lol.

Nah. It’s good you caught me on that.

Uuuuugggghhhhh… Why do these feelings always have to happen when I’m trying to sleep or when I wake up. I can’t take a nap anymore without feeling depressed…

This isn’t about anything incredibly specific. Just some built up steam I need to blow off.

Well I recently found out the coworker is much older than I am, at least by five years, and I’m fairly certain the redhead has a boyfriend. Now don’t get me wrong, I wasn’t expecting anything deep to come out of any of these interactions. I’ve made that more than clear. And I love talking to these people, and I fully intend to keep doing so.

But that doesn’t make the denial completely painless. All in the same week I get to know three people, three chances. And two of them have been shut down before I had a chance to say anything.

No matter how hard I try to keep my expectations suppressed, to keep myself from getting my hopes up, it still happens. I still get excited for the potential. The hope that after so long I finally won’t be alone anymore.

I just want to love… I want to be loved. I can never seem to shake this impatient pit in my heart that isn’t able to wait.

But who knows. I’ll get a chance to talk to that girl from my college class tomorrow. So I’ll wait and see how that goes.

You might have better luck if you don’t spend your time searching for girls. There are better things to focus on, like self-improvement… S T A N D O P O W E R, or most importantly: JoJo poses. Every girl likes someone who can softly wrrrrryyy to them.

Edit: Anyway, good luck on that. Just remember, even relationships are finite. It’s okay to want love, that’s normal, but don’t place them on a pedestal. When you do that, real ones will rarely ever live up to what you want.

To be fair I don’t actively look for girls. It’s really more a matter of chance encounters or talking to people I’d want to get to know regardless, and the idea of a potential for a relationship inevitably worms it’s way into my head.

That’s something I do actually put a fair amount of focus on.

or most importantly: JoJo poses

I haven’t the balance to lean back that far nor the squad to pull off a Pillar Men. Though that’s definitely something I could look into…

Edit: Anyway, good luck on that. Just remember, even relationships are finite. It’s okay to want love, that’s normal, but don’t place them on a pedestal. When you do that, real ones will rarely ever live up to what you want.

Thanks. I’ll keep this in mind.