The Shadowed One, Dark Hunters and Hordika Dragons design

They are a guild of the best hunters, that work for any one who can pay for their services. But above else they work for the three Merchant Kings.

You can read the story bible for G3 here.

But can Krekka get Nidhiki?

The dark hunters are a guild of the deadliest, most dangerous, group of mercenaries, warriors and the occasional ex-criminal, with the goal being profit. They have connections in the black market and in Naho. The dark hunters work for the three Merchant Kings and who ever can pay for their services.

The only way they would fight the Toa is if someone would pay them to do so.

This maybe a bit too much mad max, or not enough mad max. I been waiting to say that since November.

Here's Sentrakh on his targets trail.
''If someone sent him after you, that means someone doesn't want you alive.''
-The Shadowed One

Sentrakh was the leader of a band of criminals. When he met The Shadowed One. He challenged him to a fight, were The Shadowed One won. Imprest he joined him on his quest. Him, The Shadowed One, "Ancient", "The Recorder" and "Darkness" created The Dark Hunters guild.

Here's the drawing of the Nidhiki sketch.

so I'm a bit late, but this one is my favorite, I love the colorscheme and design

After I don't know how long I have returned. I was working on other stuff. Anyways here are "Silence" (top) and "Darkness" (bottom):

For both of them I went for a more traditional ninja design with the dark blue clothes, boms and abilities. I also made "Darkness" be the older brother of "Silence".

"Darkness"
He is a calm, cool and collected and a loyal Matoran, who does his work quickly and efficiently. But when he is not working he will be reading, meditating, training or is hanging around with his younger brother. He's also a strict teacher.

"Silence"
"Silence" is much more lively and social than his older brother, but becomes serious when needed. When working, he is almost as quick and efficient as "Darkness". But when he's not working he likes to hang around public places and tries to impress Matoran women (He fails every time), trains or is hanging around with his older brother.

Abilities and Equipment
"Silence" and "Darkness" both use stealth to do their jobs. But the difference between their style of killing is: "Darkness" uses fear and hit and hide tactics when killing his opponents, while "Silence" uses sneak attacks and distractions to kill his opponents.

When it comes to equipment "Silence" and "Darkness" both use smoke bombs, shurikens and rope. But "Silence" also uses gunpowder, flash bangs and his twin kamas while "Darkness" has his blade, kunai and extra clothes for disguises.

When it comes to abilities, well their both fire Matoren so they can control fire.

Also i made a Deviantart account if any body wants to se more of mine art: TempleBeast735

Here are all the dark hunters excluding "Silence" and "Darkness".

Lariska in her off time likes gardening and she also sells the fruits, vegetables and flowers for some extra income on the side. It's also where se gets her poison.

Sentrakh is the only dark hunter that does not use his code name, mostly because everyone is afraid of him (Except for The Shadowed One, "Primal", "Ancient", ''Amphibax'', "The Recorder" and "Darkness"). "Prototype" is completely terrified of Sentrak.

Yes, "Tyrant" would jump and swim in a pool of money Scrooge McDuck style if given the opportunity.

''Amphibax'' is in hiding from the Arbiters.

"Conjurer" is a street magician in his free time.

"Ancient" visits his relatives in Nahoan on his days off.

The Shadowed One is the one who gives out assignments to the other Dark Hunters. The assignments can be big things like assassinations, information gathering, bodyguard work, etc. to small things like killing pests, guard duty etc. Dark Hunters even got a babysitting job once. The Shadowed One gave the job to "Conjurer" and "Vanisher"...... They came back tired, covered in paint, food, and some unknown liquid and "Conjurer" also had a broken arm.

Krekka is older than Nidhiki.

Krekka has short-term memory loss from years of getting hit in the head by his opponents. Nidhiki has to constantly remind Krekka of their current mission.

Heh, those are quite fun little bits.

This is an good Christmas gift.
I wish I could remember who is who on the drawing.

The small lore tidbits made me smile.

Thank you very much. I'm very happy that i made anybody happy.

And for who is who, from left to right:

Happy new year to all. I wish you all a lot of happiness and health in 2019.

“Vanisher” just appeared from nowhere. No one knows where exactly he came from or who he is, and yes The Dark Hunters did see his face and tried to identify him, but no luck. 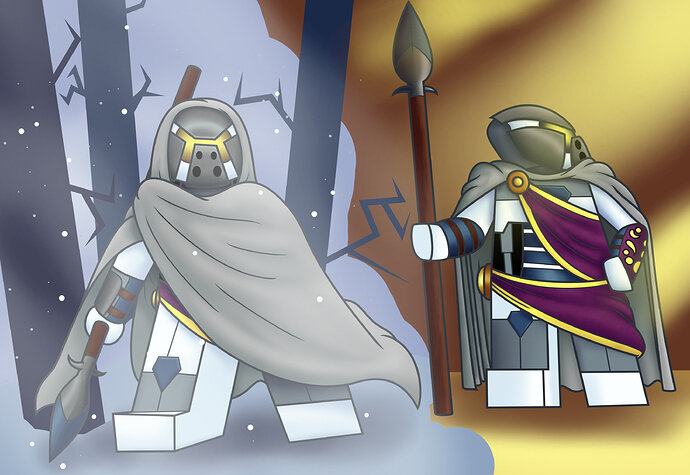 Here the picture without foreground: 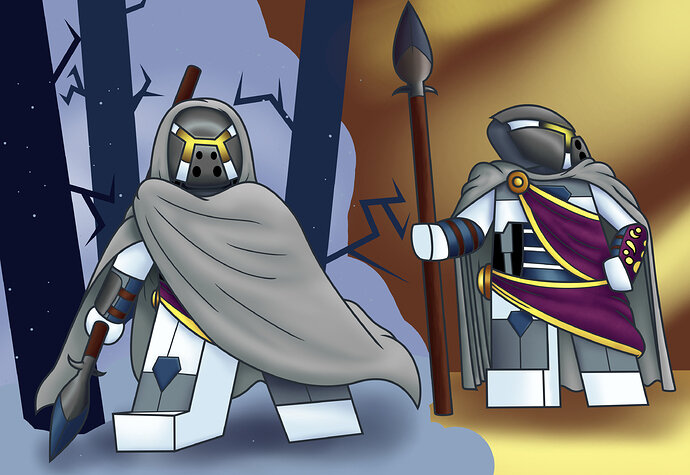 “Vanisher” is weird. He acts and talks like a nobleman and even wears noble clothes, but his vanishing skills, efficiency in battling, killing and tracking, not to mention his wisdom says otherwise. He also has an annoying habit to appear out of nowhere. The other Dark Hunters… well let them tell what they think of him:

‘‘I swear to Ekimu, if he calls me wench one more time, I’M GOING TO THROW HIM IN FRONT A KIKANALO STAMPEDE!’’

‘‘He always appears at the worst time. Do you know HOW many times He caused me to break one of my inventions.’’

‘‘As a fellow warrior of stealth, I’m impressed. as a fellow Matoran, I’m annoyed.’’

‘‘How does He do that? Even I’m confused how He does it? I’m a bit imprest and jealous.’’

‘‘I was taught to never say bad things behind someone’s back.’’

‘‘I must say that I love his upbeat personality and his regal conduct, but it does get a bit annoying and his habit to appear from nowhere is very annoying.’’

‘‘He would be fun to hunt down.’’ Looks at a empty spot on his trophy wall.

‘‘I heard he’s not very popular with the other Dark Hunters, but that doesn’t matter to me. But what does matter to me, are great results. And I’m very impressed and happy with His results.’’

Have a great day!

Give him Greed’s abilities from Fullmetal Alchemist.

If I remember Greed has the ability cover his entire body in a black armor like skin.

I picked Magnetism because greed and the ability to attract precious metals to yourself seems like the perfect fit. And yes I’m aware that not all metals are attracted by magnets.