For one this guy is freaking awesome! Great character man! And also

Attempt to intercept whatever it is?

You betray your name.

Conceal himself. Whatever the thing is may not need to know there’s a Makuta around just yet.

Continue toward the impact site?

For one this guy is freaking awesome! Great character man!

You betray your name.

Alrighty then, conceal don’t feel it is.

I should have it posted before days end (where I live anyway ;P)

Also, if someone could post between now and then so I don’t double post that’d be great

@TFM101A he will continue after whatever it may be passes him, assuming it passes him that is

conceal don’t feel it is

As the sound of the engine grew ever louder Kraazyk crouched and became all but invisible to the untrained eye as his colors shifted to match his environment. Seconds later a red motorcycle zoomed past. The rider was clad in silver, black, and gold. He was clearly headed toward the impact site as well, and he was in a hurry. The rider continued to accelerate despite the jagged terrain and lack of an actual roadway, displaying as he did a considerable amount of skill.

Using the terrain to his advantage, Kraazyk maintained his camouflage and made frequent quick teleports to keep up with the rider without being detected. Once he got close enough, Kraazyk teleported to a good vantage point and took in the battlefield before him.

There were six combatants he could see, not including the rider that was only seconds from entering the scene. There were four working together, a red one wielding fire, a blue one wielding water, a white one wielding ice, and a teal one wielding metal. Against them was a yellow and black one that was twice the size of any of the others that was mainly using brute force and another purple one about the size of the others that wielded the power of electricity. They all seemed to primarily focus their energies through throwing disks not unlike the Kanoka with which Kraazyk was familiar.

Despite their obvious numerical advantage, the four were clearly outmatched with fire, water, and ice barely holding their own against the yellow brute as the metal one sped around mostly dodging the attacks of the electric one. Mata Nui this would be easier if Kraazyk knew names

As the rider he had been following got closer Kraazyk noted him take out a disk of his own, but before he could use it an orange being flew out from behind the meteor itself and threw a disk of plasma, blasting vehicle and rider in opposing directions. Leaping quickly to his feet the rider dodged a second blast and threw his disk, which the orange one proceeded to dodge. All this did not go unnoticed, however.

The yellow brute threw two disks at once, one causing flora to sprout and entangle the ice wielder the other sent out a gust of wind that knocked the fire wielder back into the meteor with a solid thud even as the orange being swooped down and took on the water wielder. The yellow brute let out an intelligible roar and charged the rider at breakneck speed even as the rider readied another disk…

Secondary query…
I skipped it this time because I’m lazy and I’m going over to a friends soon to watch AoU and I promised(ish) to post this today, BUT do you guys want me to include a flashback like I did in the previous part in most parts or should those be reserved for when Kraazyk is unconscious/dreaming/having visions and such?

And as for this,

Help the rider and what appear to be his friends

Flashbacks should be when dreaming or remembering stuff.

Don’t interfere and allow things to take their course?

Cause Millennium is my favorite slizer!

I also agree with @Triple that the flash backs should be only in dreams or like dull moments for remembering stuff, also I am SO excited on this topic and can’t wait for it to continue!

I vote this one.

Don’t interfere and allow things to take their course?

My vote.
Doin’ well so far.

Based on the brute’s - well, brutishness - Kraazyk figured he wouldn’t get anything useful from him. On the other hand, helping the rider could very well earn Kraazyk a favor. Plus he was getting bored just watching.

Taking a running leap and teleporting part of the way to speed things up, Kraazyk landed between the rider and the brute. It’s worth noting at this point that the brute, while easily twice the size of the others, stood a good head and shoulders shorter than Kraazyk. To his credit the brute didn’t even break stride in his charge.

A swift backhand sent the brute sprawling. Leaping back to his feet he threw a disk and roared. As Kraazyk sidestepped, the Blade of Fate began giving Kraazyk the powers of his opponent. Air and plant control were to be expected. In addition there was high powered concussive blasts and…

Before Kraazyk had even finished figuring any further abilities he was sent flying backward by a blast. More embarrassed than anything, Kraazyk rolled with the hit and landed on his feet. In the meantime, Kraazyk had bought the rider enough time to get to his cycle. Ramping off the rugged ground, the rider and cycle flew through the air and merged. Landing as a being on the same scale as the brute he socked him across the jaw.

Turning to Kraazyk whilst grappling with the brute the rider said in a thick accent, “If ya weesh tae haelp, Makoota, I suggest ye assist Taerbo or Scooba.” Turning back toward the brute with a grin he added, “Ah ken handle wee Blaster here.”

Leaving the rider to “handle Blaster” Kraazyk turned his attention to the other combatants. “Turbo” had managed to create a network of wires to redirect the purple fellow’s attacks, but wasn’t making any headway in getting close enough to land any attacks of his own. Meanwhile “Scuba” was having something of a hard time, clearly out of his element he was taking heavy fire from the orange flier. Taking several swift long strides over to where they were fighting Kraazyk magnetized the disk the orange fighter threw at him causing it to return to sender, blasting him back. Teleporting in the way of his trajectory Kraazyk caught him and screamed, sending the orange fellow flying back into the purple opponent with sufficient force to leave them both stunned.

Using his command of plant life he freed the Ice wielder and using his quick healing he got the Fire wielder back on his feet. He presumably thanked Kraazyk, but he did so in a language alien to Kraazyk.

“Pardon the intrusion,” Kraazyk said as he reached into minds the four ‘Slizers’, “I needed a bit of data. Mainly linguistics.”

Turning to see how the rider known to the others as ‘Millenium’ was fairing, Kraazyk saw that he was doing quite well. Landing a flying spin kick and following up with throwing a disk before he landed the rider proved he knew what he was doing. Or maybe not.

Blaster begin laughing maniacally, quivering with an overload of energy and started to blur until he split into three equally sized Blasters. Whilst this was happening ‘Flare’ and ‘Spark’ managed to recover and head over to the original Blaster. Merging, the three made themselves into a two headed titan, managing to match Kraazyk in hight. One duplicate Blaster charged toward the four, another charged Kraazyk, and the big guy faced off against Millenium.

BWAHAHA! NOW TO CHOOSE WHO TO FIGHT!

BUT WAIT THERE’S MORE! THAT’S NOT ALL! YOU ALSO CHOOSE HOW TO FIGHT!
A) Physical? Straight up punching, kicking, and of course sword wielding.
B) Power? Ya know, lightning bolts, lasers, and telepathic abilities.

All that being said, I will up the stakes slightly. There are essentially 6 options open to you. 1 of them will end the fight right then and there. 3 will prolong the fight. 2 will make things go badly… and possibly cause casualties 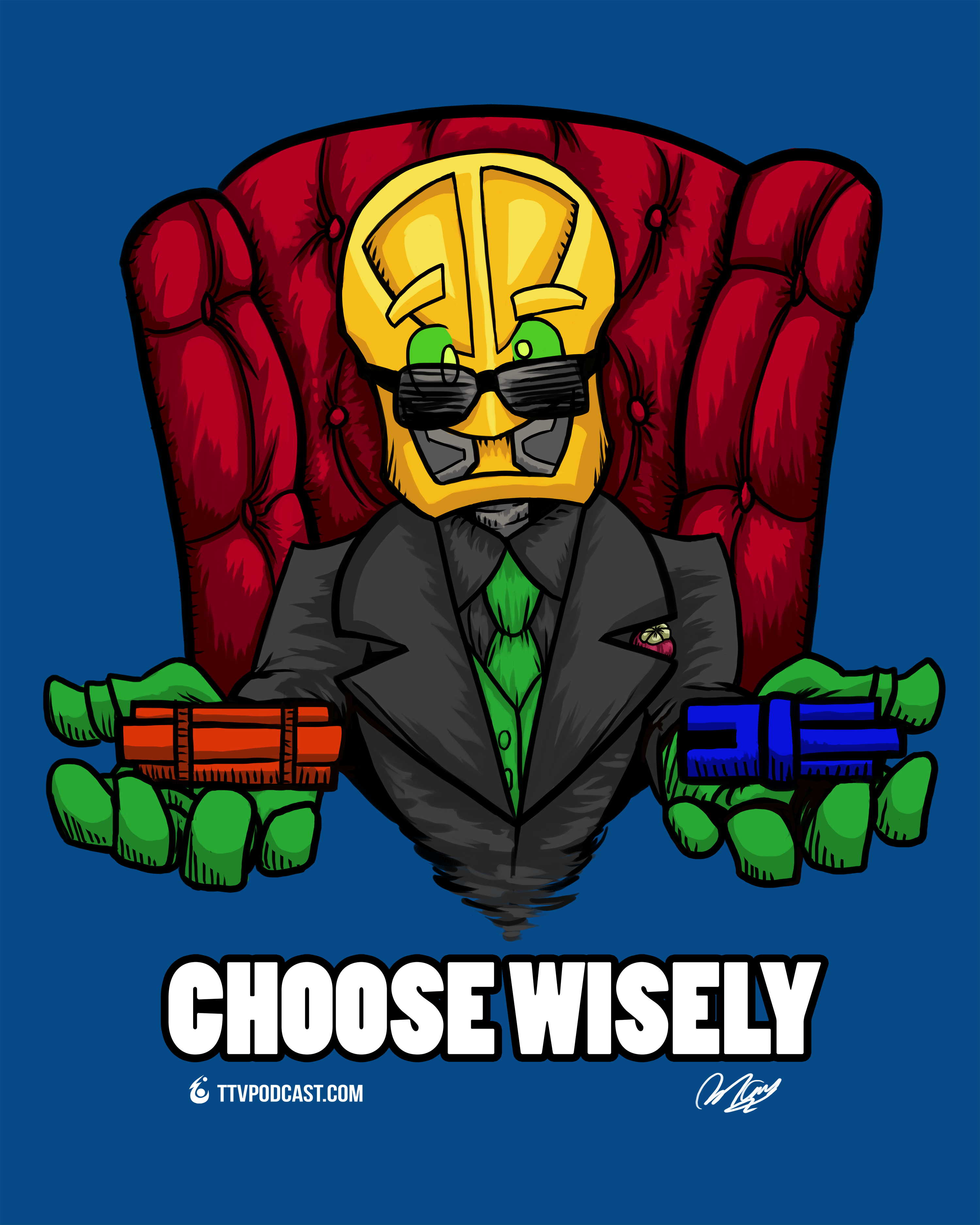 A) Physical? Straight up punching, kicking, and of course sword wielding.

A) Physical? Straight up punching, kicking, and of course sword wielding.

These are my hesitant votes.