Warning: enormous wall of pictures and text ahead

I haven’t built much recently due to classwork, but I’ve found the time to do some revamps of the protectors, which have become my favorite sets of the wave so far. Mostly, I wanted to keep their size and look roughly the same while fixing some of their problems and upgrading their weaponry. Unsurprisingly, some of the revamps went deeper than others. 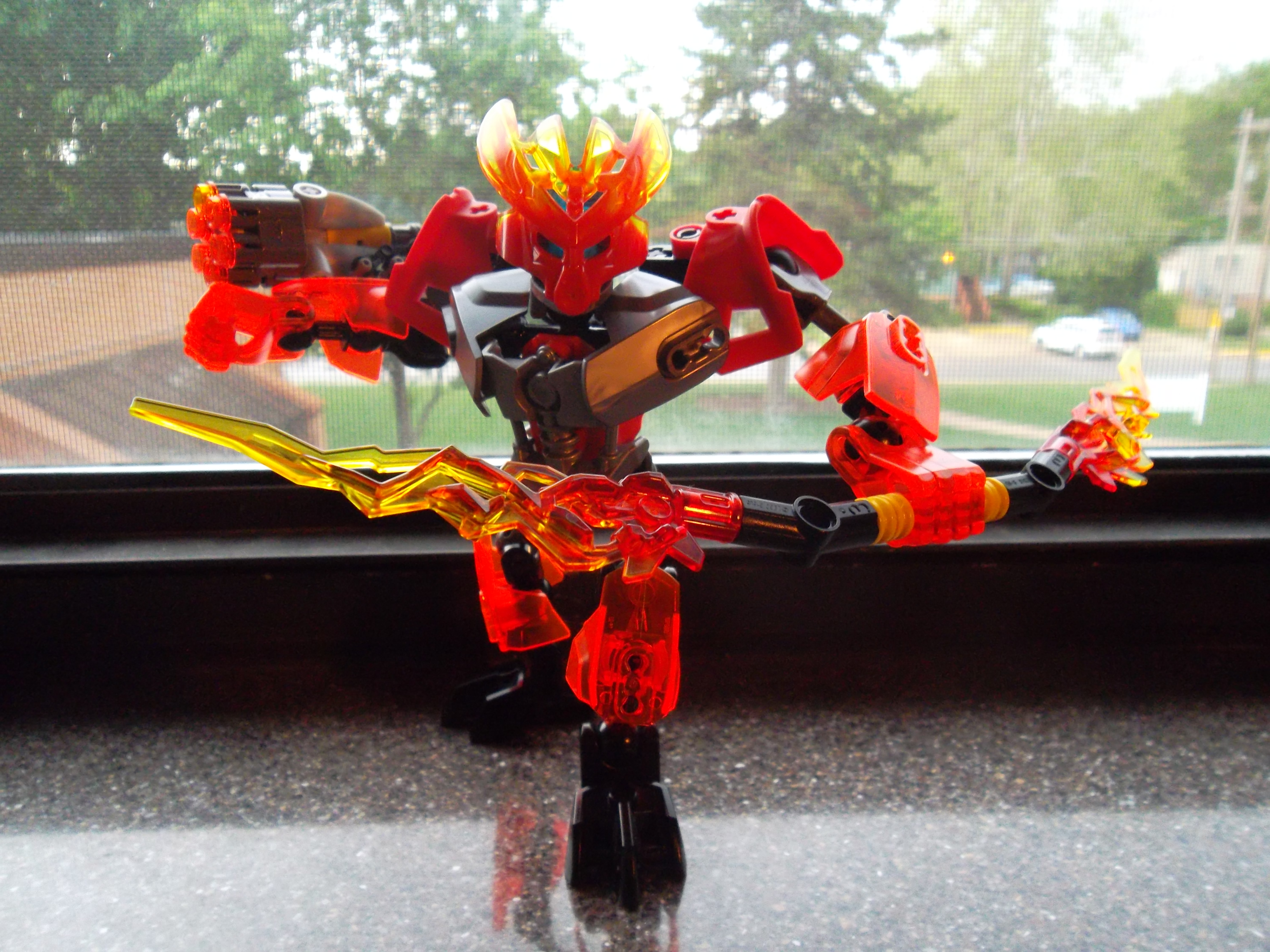 Launcher maintenance was tedious work, but Jerra made a point of keeping his equipment in prime condition, as was expected of him. He’d risen through the ranks quickly, joining the fire tribe’s defense force as soon as he was old enough to do so, and with hard work and just a little bit of politics here and there, he’d made it into the high priest’s guard. It was a prestigious position, and more importantly, well-paid. Jerra considered that compensation for being forced to use the guard’s official weapon, a curved, two-sided glaive. Jerra hated it; it was a large, clumsy thing compared to the more standard wrist and elbow blades of the lower ranks. Still, much as he disliked the glaive, Jerra was one of its most proficient wielders, capable of making harsh slashing attacks as well as slick parrying moves. 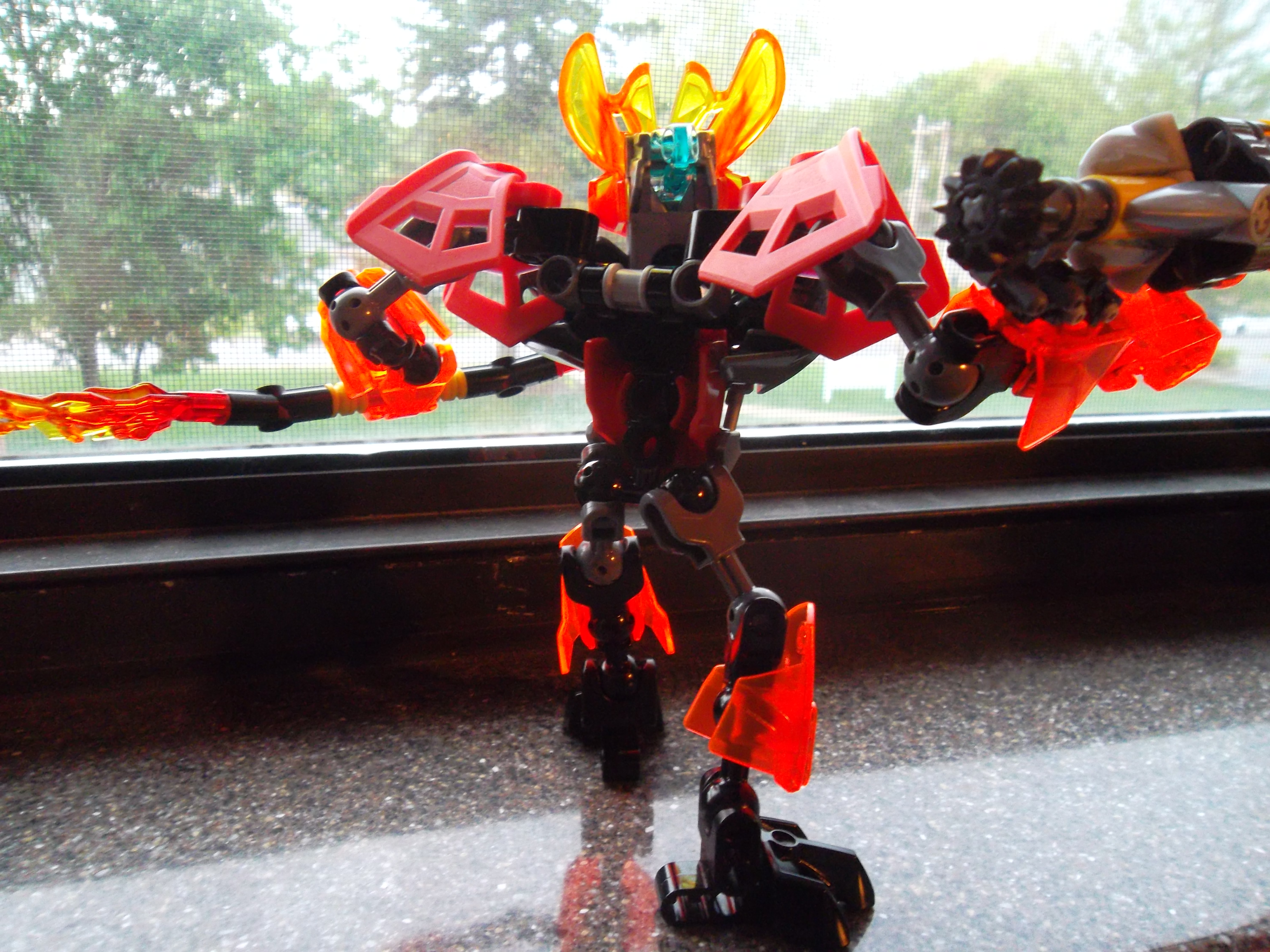 He knew that, in an actual fight, his fire blaster would be far more likely to save his skin than the glaive. Mounted on his arm, with a folding recoil mechanism to enhance accuracy, the blaster was an excellent weapon, particularly against those from other regions, not used to the heat and flame. Jerra dismantled and cleaned it on an almost weekly basis, and spent a good deal of his off-duty time at the firing range, honing his aim. Okoto was at peace for now, but if anything did threaten the fire tribe, he would be ready to meet them. 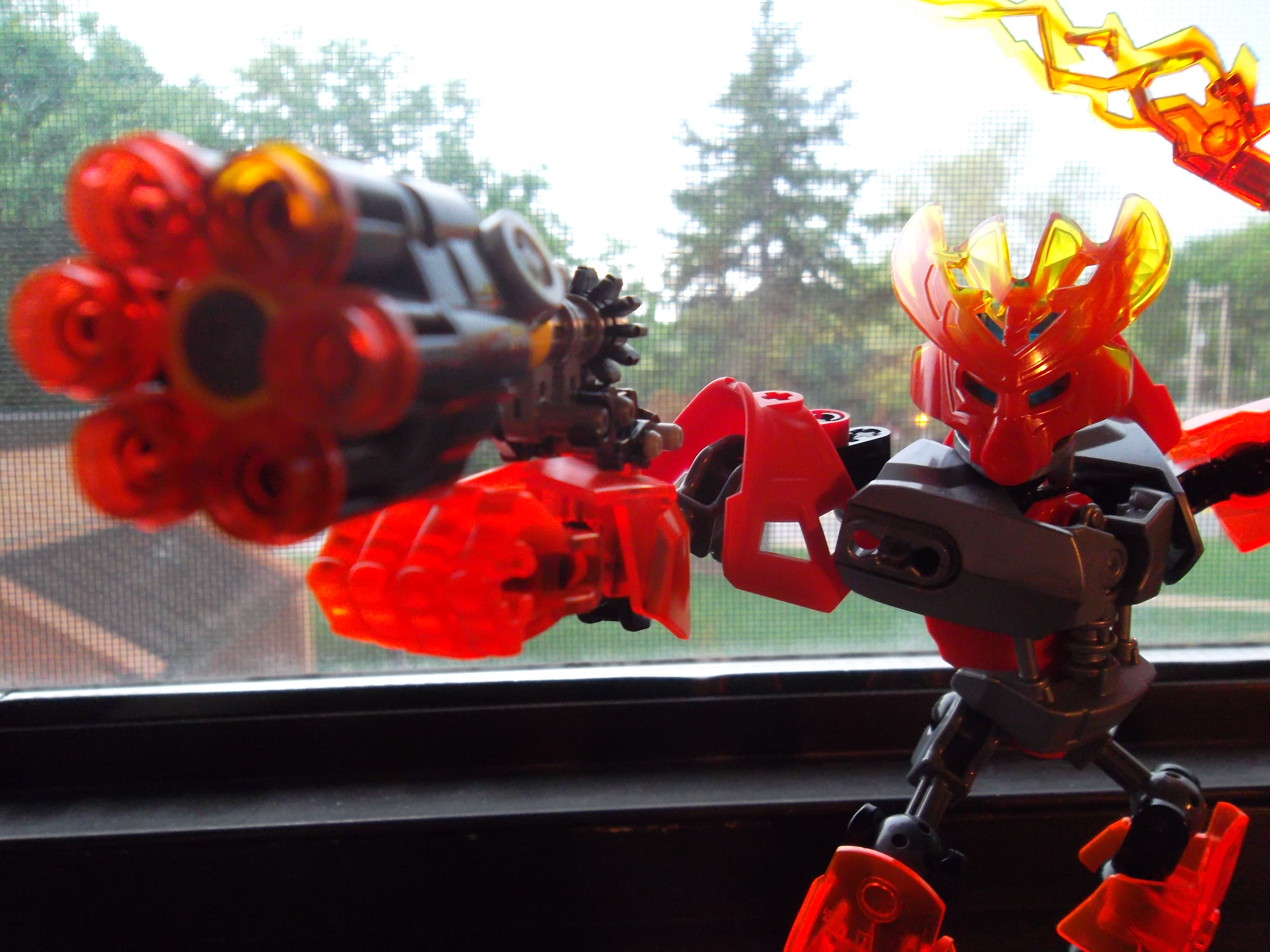 Builder’s Notes: I didn’t change anything about the torso besides adding the shoulder pads, since the Protector of Fire’s build was my favorite to begin with. I just lengthened the limbs and came up with a better looking weapon than the silly folding sword things the set came with. Initially, I was a bit nervous about moving the blaster from his shoulder to his arm, but the addition of the shoulder pads kind of necessitated it, and I love the end result. 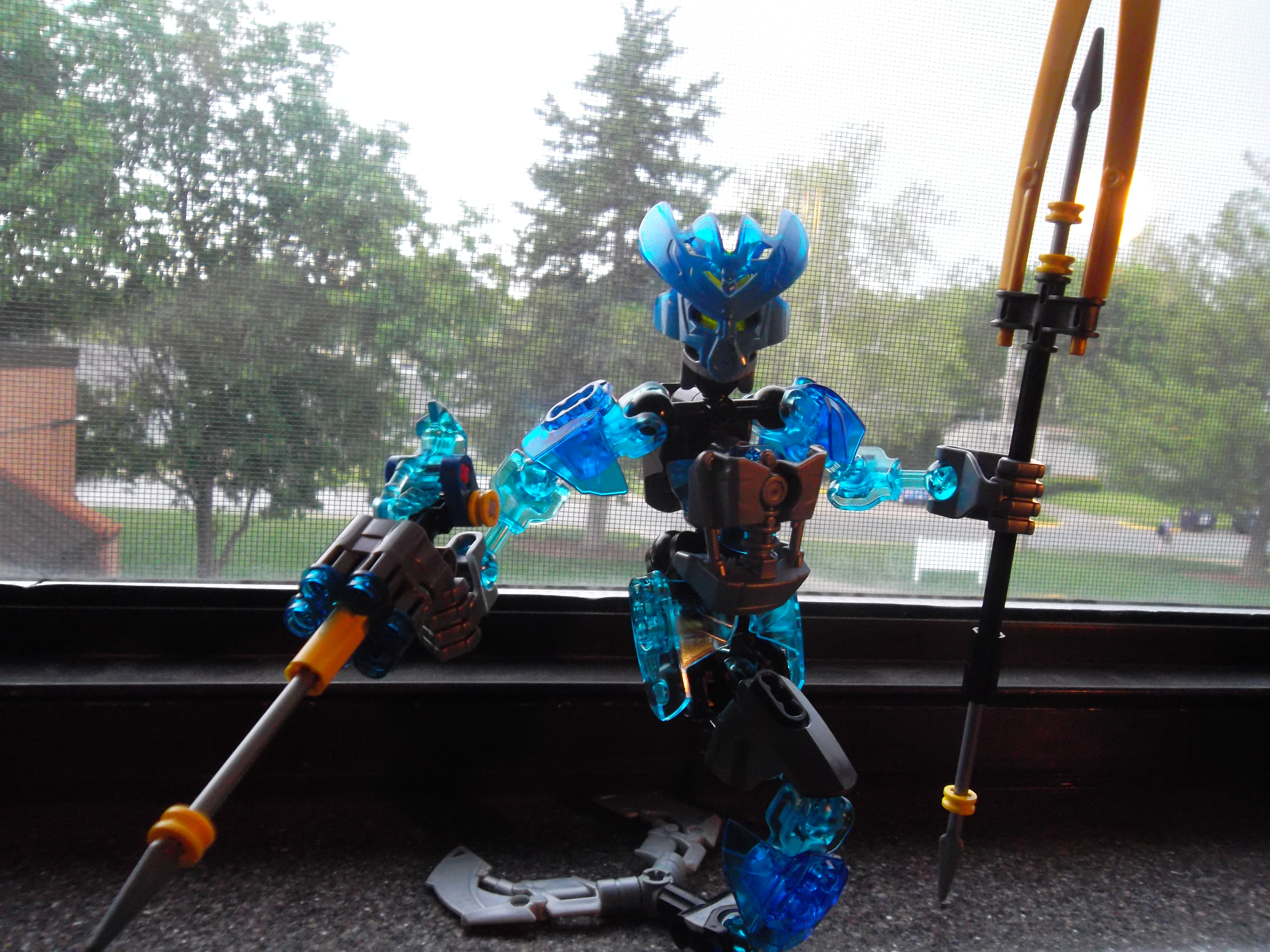 The shark slowly approached the school of fish in the distance. Its intentions were clear, easy to read, but then sharks were predictable creatures. Suddenly, a muffled blast, and the shark lurched backwards, as if hit by a shockwave. Then another, and a third. Stunned, it could do nothing when a figure approached it from below at high speed. Three prongs found its soft underside and pierced its heart. Niali had kept the school safe, again. 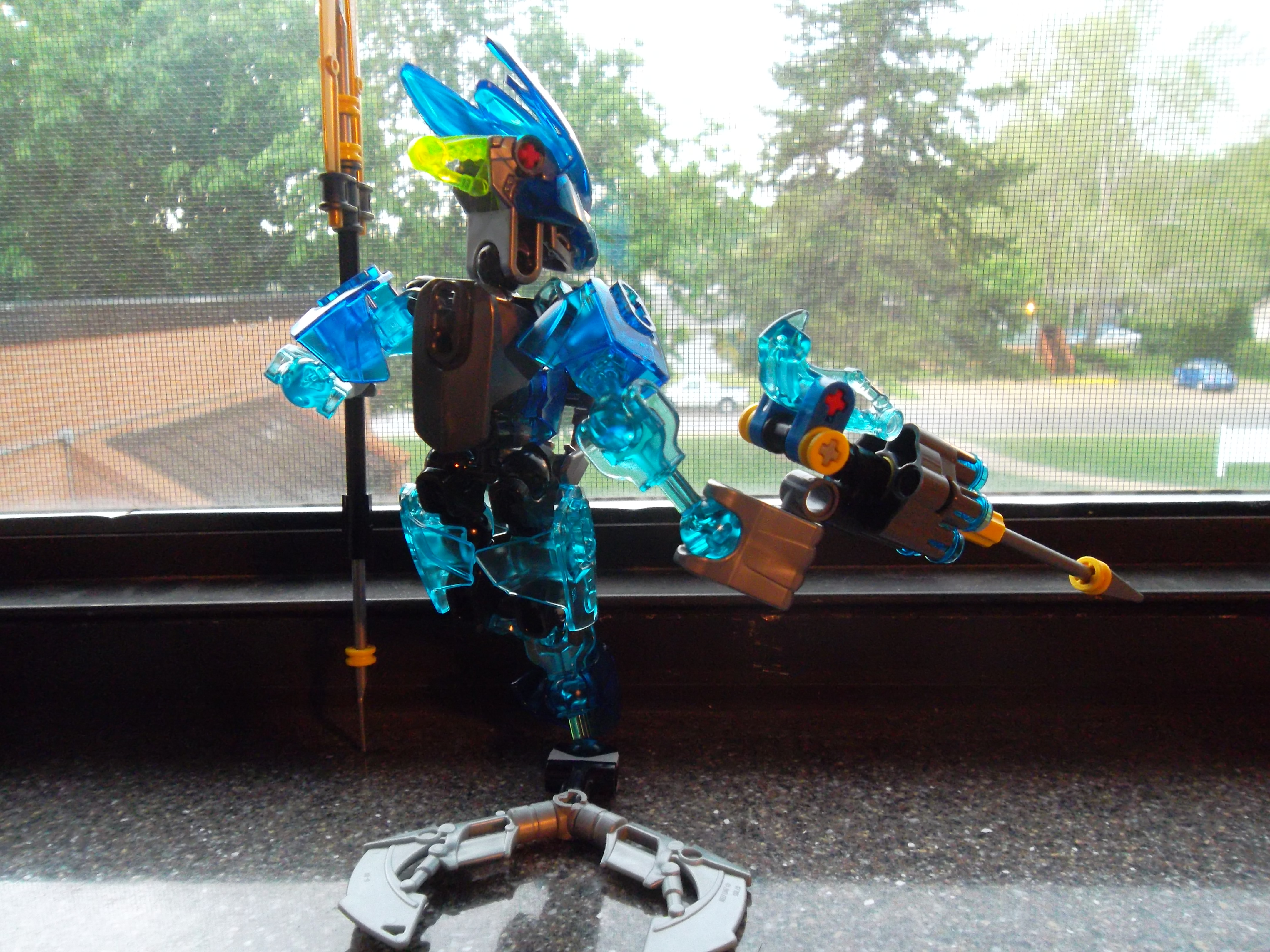 Some said the Great Spirits had a cruel sense of humor, to give Niali a dolphin’s tail over a pair of legs. Unable to get about on her own on land, she’d spent just about all of her life in the water. This was her domain, where she could outspeed almost anything and outfight the few things she couldn’t get away from, and that without the aid of propellers, jets, or other noisy devices her brothers and sisters had to use. Besides, the water tribe faced little threat from land anyways, and Niali’s job of keeping the fish, and therefore the tribe’s food supply, safe was one of the more important ones in the tribe. Also, it was a perfect cover for Niali’s real passion; searching the seabed for ancient, sunken treasures, which were sold at high prices to the jungle tribe in particular. With another shark dead, nothing was likely to threaten the school anytime soon, so Niali dove back down. She’d seen another cave on the seabed. Who knew what was hidden within? 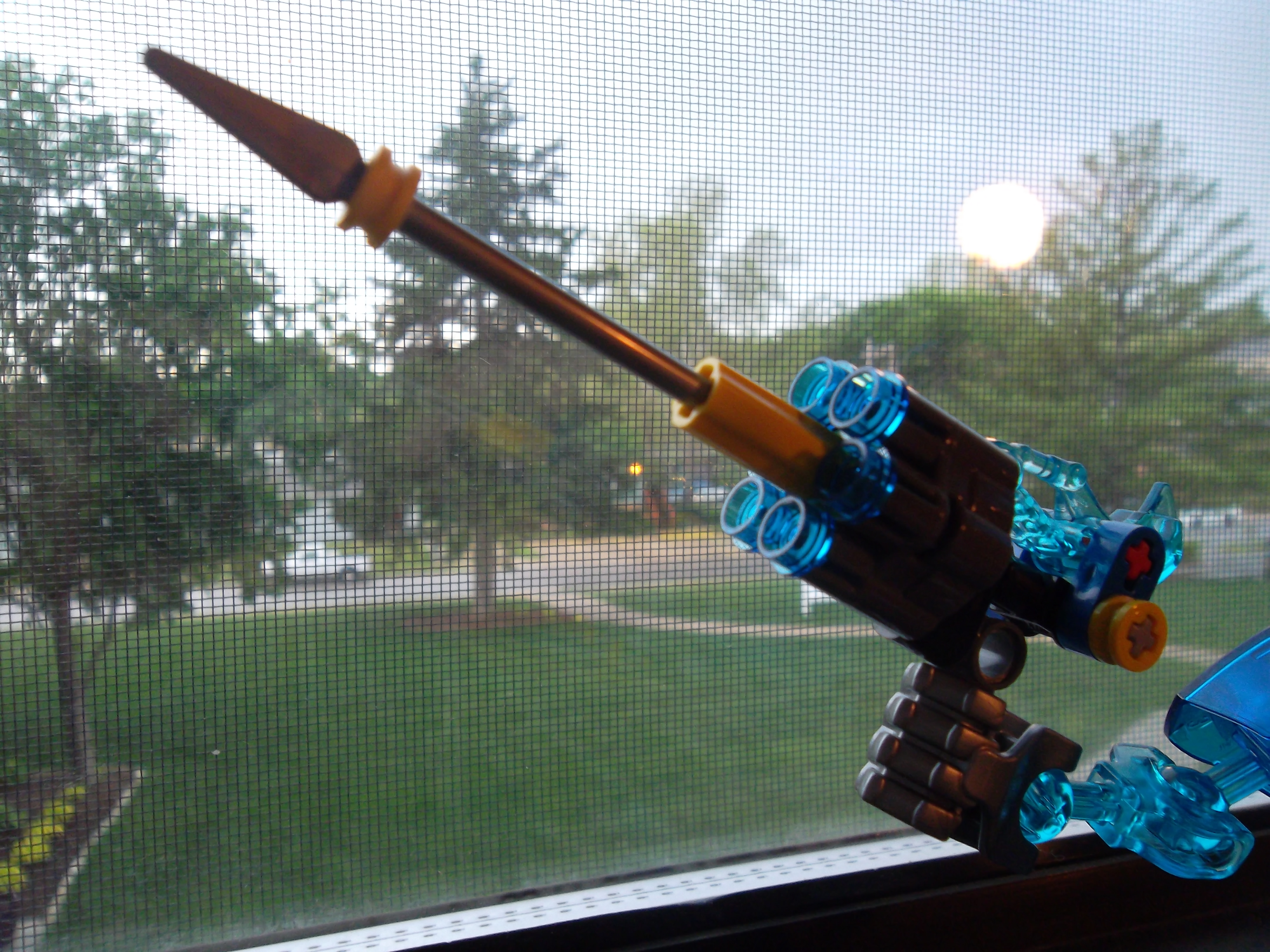 Builder’s Notes: The most radical one, by far, but since the water region is largely composed of rivers and deltas, and the water tribe village is depicted as being underwater, I figured a protector mermaid herder and treasure hunter wasn’t much of a stretch.

“Right…about…here!” Eldan brought his hammer down over his head with a mighty swing. The rock shattered, revealing a flawless, deep purple crystal that had been hidden within. Gems like this one were the Region of Earth’s only real useful resource; the earth tribe traded with others for just about everything else, although a few were trying to turn some of the surface into useful soil for agriculture. Of all the tribes, the earth tribe relied the most on others, but the wealth brought to the surface by miners like Eldan every day meant that the tribe could usually afford to buy its favors. As far as Eldan was concerned, this wasn’t likely to change anytime soon.

Eldan had a natural, inexplicable sense for where valuable gems were to be found. Perhaps he was just lucky, but time and again, he was the one who discovered a large, new vein. As a result, he’d grown wealthy enough have a large maul encrusted with the diamond-hard gems, turning it from a brutal weapon into a highly effective, if crude, mining tool. If some burrowing monster did show up in the mine, it would also make a far better weapon than those puny drills did. Sure, it sometimes smashed the gems along with the rocks, but for Eldan, the brute-force approach was preferable to slowly grinding away at the tunnel walls with a tiny, noisy drill. Besides, he knew there was no shortage of gems to go around. 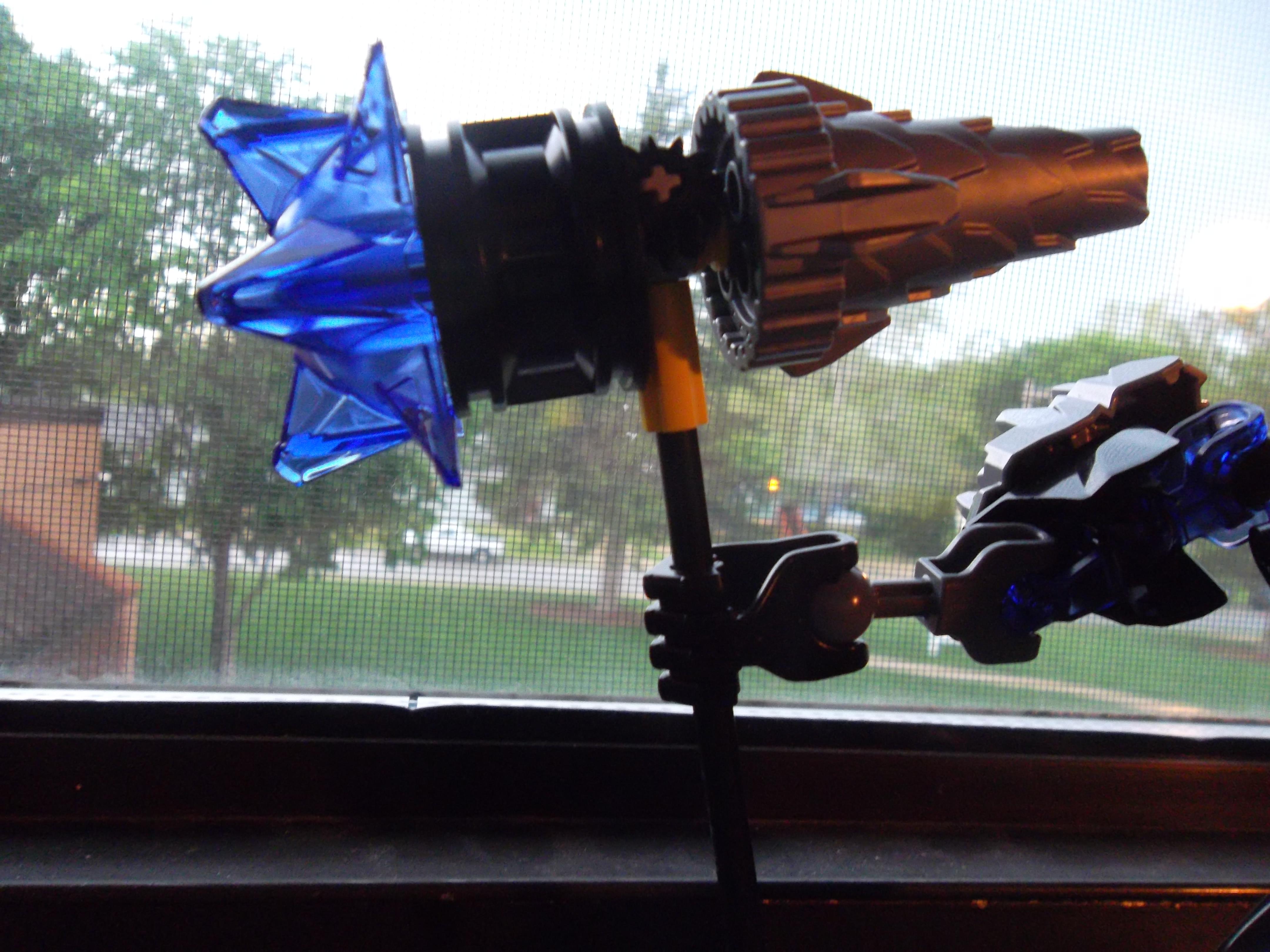 Builder’s Notes: I switched Eldan to the PoF’s build, mainly because I think it looks a bit better than the PoE’s build does, although it’s still gappier than I’d like. I think the PoE suffered badly from the $10 price restriction, which was reflected in the set’s original tools, so the hammer is definitely an improvement.

Bella was hungry, Marek could tell. It had been too long since the last desert monster tried to separate them. As of late, the only opposition around were the skull spider vermin. Sure, their faces made for decent armor, and Marek was already wearing a trophy, but they were mere snacks for Bella, and she craved something bigger, something more… dangerous. Perhaps Marek would have to wander a little off the beaten track, some distance away from the trade route with the ice tribe that he had volunteered to protect. Closer to the northern mountains, to the wall the ice tribe had erected to keep outsiders out, that was were the true monsters roamed.

Bella, of course, was Marek’s project, his baby. An inventor and tinkerer from the day he first touched a screwdriver, Marek had never been satisfied with the regular old sandstone blasters used by the stone tribe. Bella was his own, unique, heavily upgraded version of the weapon, his most faithful companion and ally. Bella spoke exactly one language, consisting of whirring noises, followed by a devastating blast, and then eerie silence. To Marek, it was the most comforting sound in the world, and he’d take almost any excuse to let Bella sing her morbid song. 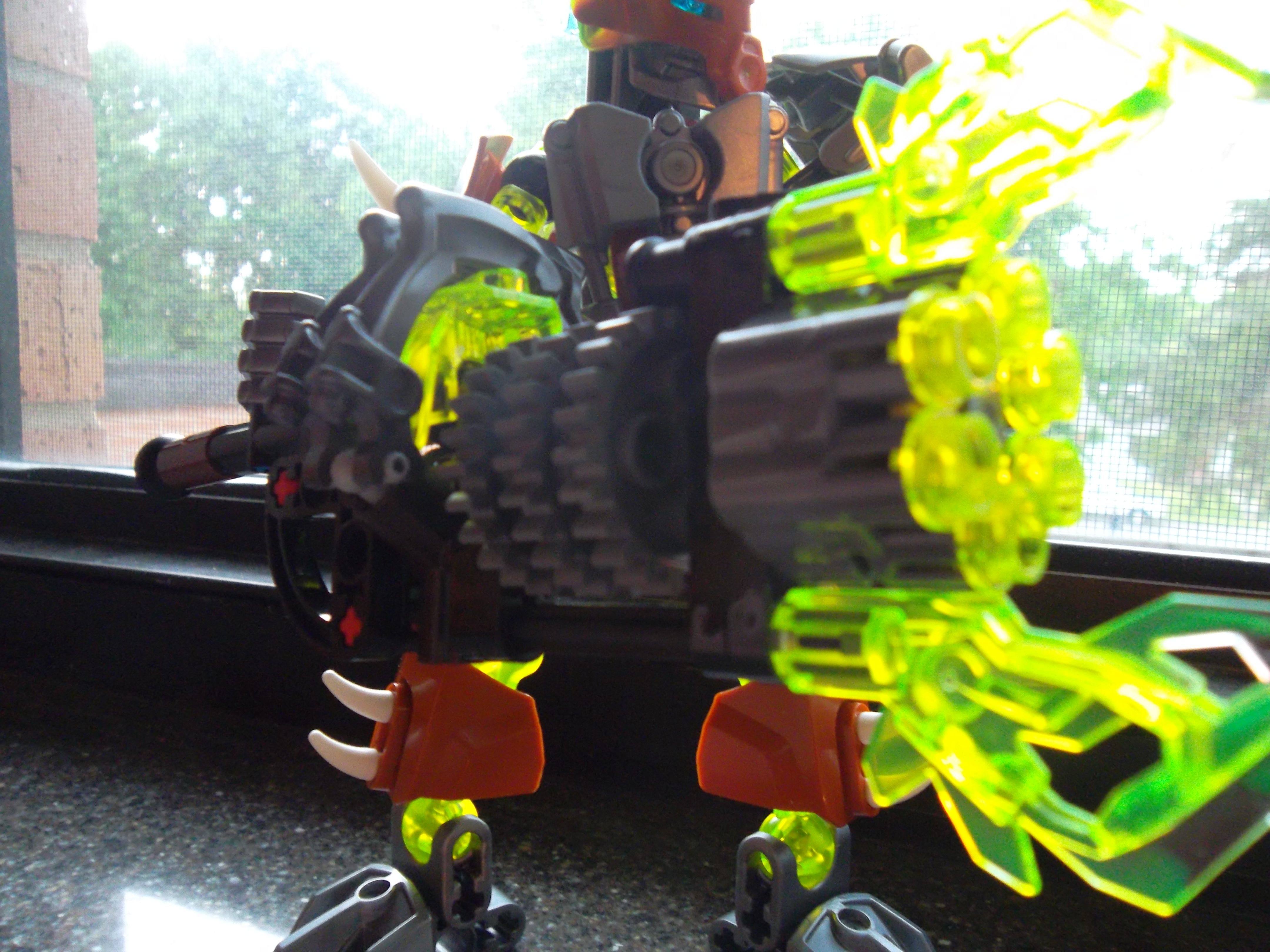 Builder’s Notes: This was a fun one. Besides adding the skull spider mask and some back armor, the only real modification I made to the PoS’s body was to lengthen the legs slightly. Bella, though, took shape over a few iterations.

“So, you’re the new one?” The commander asked. Maylin nodded. “Yes sir.” “Welcome to the tree watch, then. If you prove worthy, you’ll do well here. If not…” “I understand.” Maylin had been preparing for this job for years. The tree watch were the second most prestigious group in the jungle tribe, right after the scholars and academics who scoured the ancient protector ruins. Guarding both the ruins and all the jungle tribe settlements, the tree watch had more than once saved saved Maylin’s life in the past. Adventurous by nature, she always was prone to wandering off, and the jungle was far from a safe place. Now she had a licence to travel and explore as she wished and the ability to defend herself along the way.

The defense, of course, was the traditional weapon of the jungle tribe, the air elemental flame bow. Excellent for long-range shots, it was the ideal weapon for an environment like the jungle canopy, in which getting close to the enemy was rarely an option. Maylin was not a good shot, but a special scope fitted to her bow allowed her to pass the tree watch entry standards. In everything else, survival, navigation, tracking, she performed admirably. Hopefully accurate shooting would just be a matter of training. 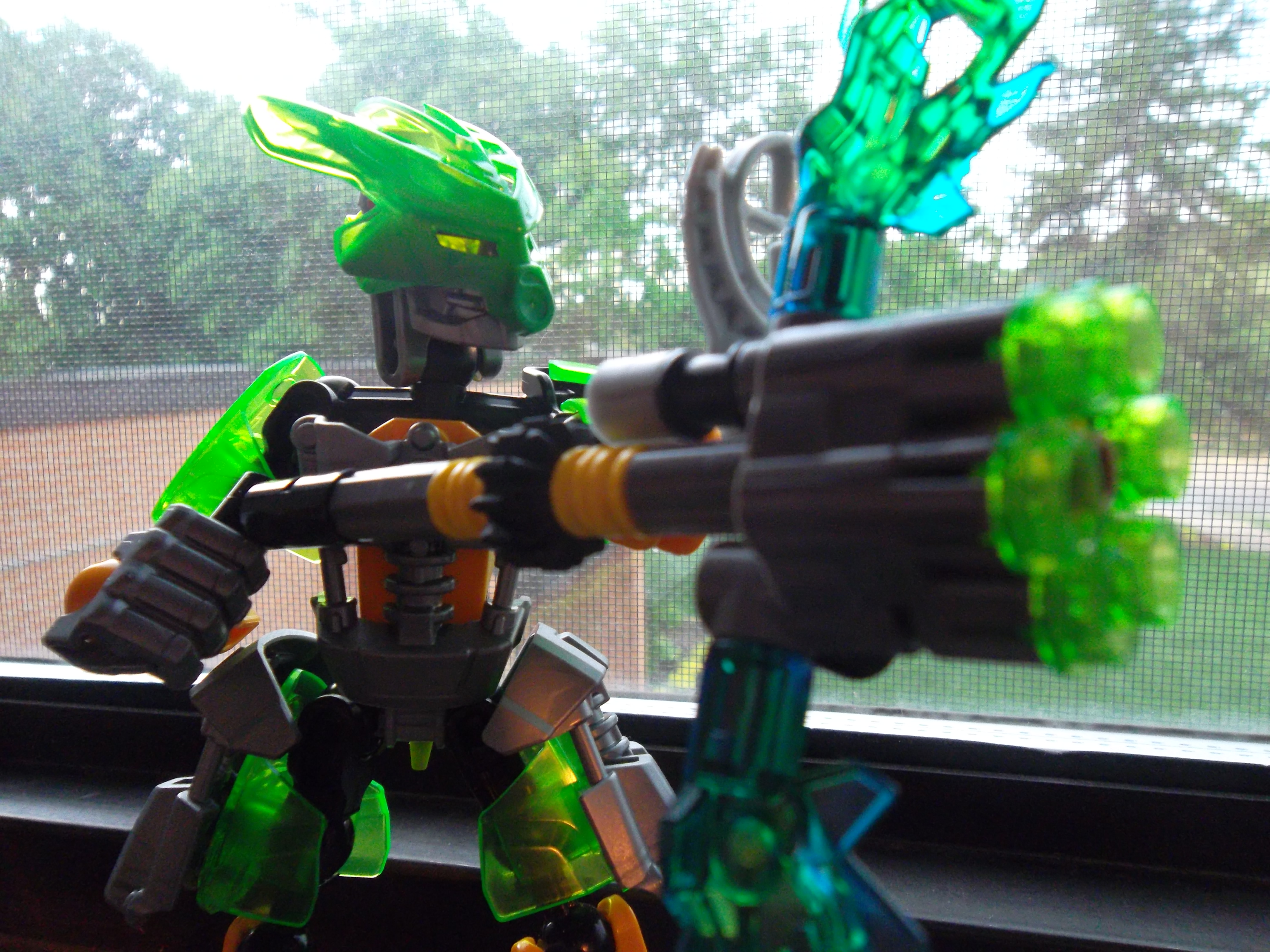 Builder’s Notes: The PoJ has the my favorite weapon of all the protector set, even if it has a silly name, and I didn’t want to mess with it too much beyond adding the scope. I didn’t have many ideas for the rest of the set either, except that I didn’t like the torso, so I made a new, custom one. Because custom torsos are hard, this build took longer than almost all the other ones combined, including Marek and Bella.

The mountains were quiet companions, a fact that Varice had come to appreciate. She had not seen another protector for several months, but soon a small party would arrive to resupply the outpost. After that, another few months of solitude, and then she’d be relieved. Some had been known to go mad during their time on the barren, snow-covered peaks, but if anything, Varice wasn’t looking forward to going home. A petty thief and criminal, she’d been sentenced to the twilight watch as a punishment. She had no friends in the ice tribe settlements on the barren plains, no, the mountains were her friends now. 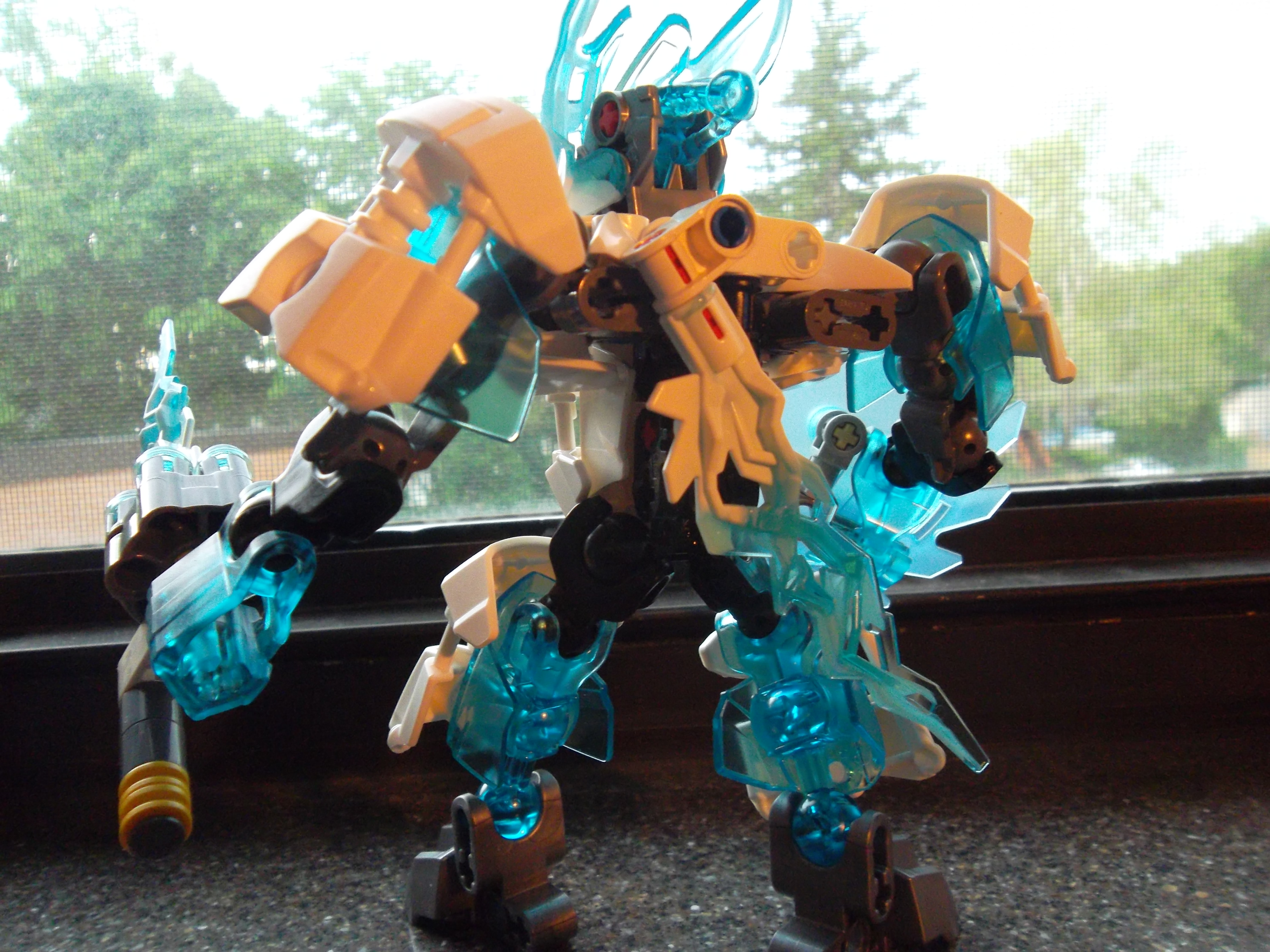 At night, they whispered to her their secrets, stories of the history of Okoto. Varice spoke their language now, she was a creature of the northern mountains, subservient to nothing and no one but the harsh wind and deep snow. When the weather permitted it, she would travel down the mountain slopes, searching for and eliminating creatures that burrowed into the mountainside. They caused the mountains pain, and Varice couldn’t stand to see her friends suffer. When the mountains were angry, and the howling wind battered the walls of the watch tower, she’d bide her time, sharpening her swords and the saw edge of her shield in anticipation for the next hunt. The mountains would provide for her, the lady of the twilight watch, guardian of the north. 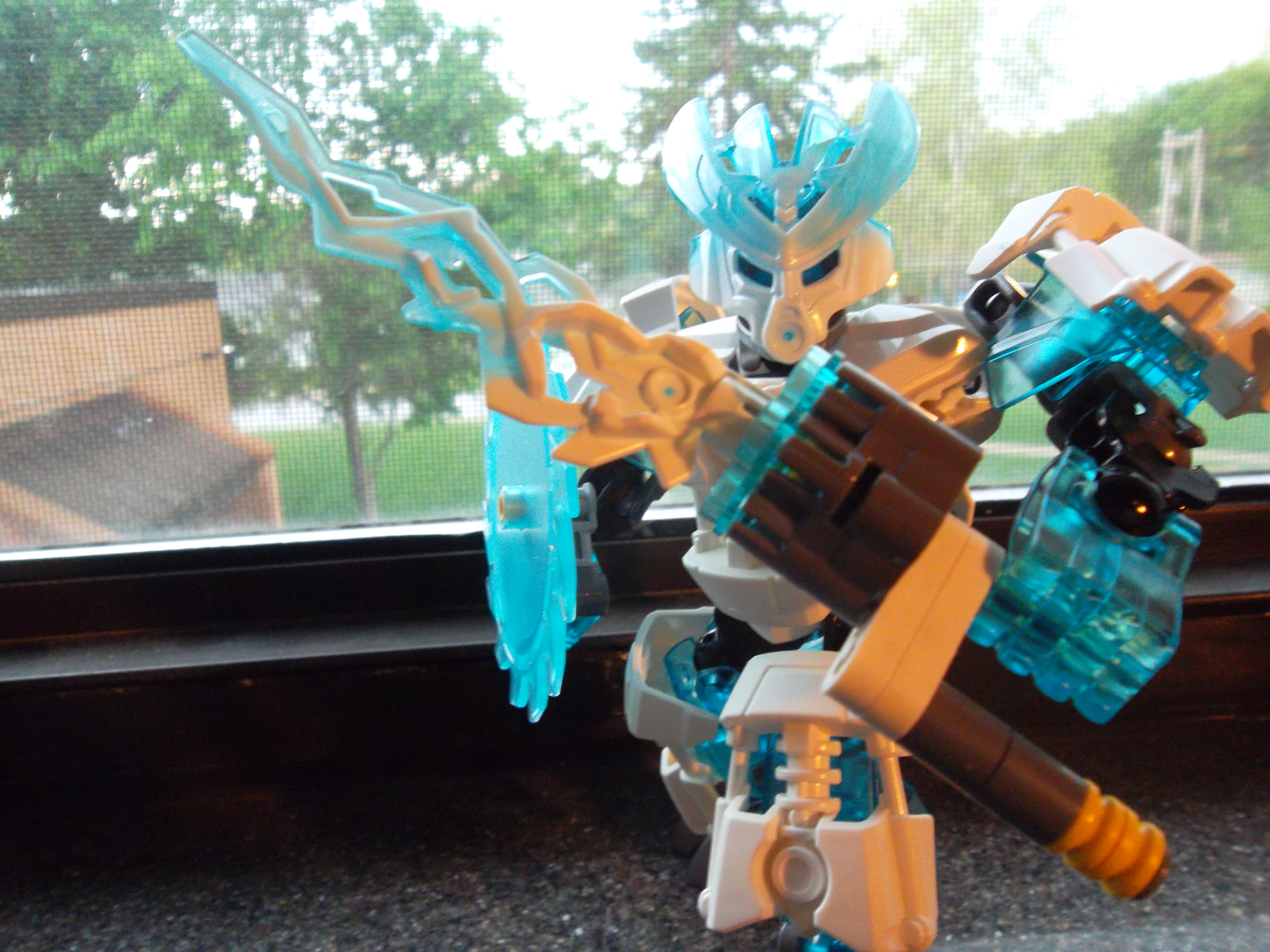 Builder’s Notes: Another slight modification of the PoF build. Varice was the first revamp I did, mostly because I bought an extra PoI set and wanted to see what I could make of it. I think I managed to make her look sufficiently bulky and bundled up without going to ridiculous proportions

I love all of them!

interesting that you made half female

I like to think I have the presentation and background department pretty well sorted :).

What, what is there for me to say. They’re all very clean, they look good. These are great.

Huh. Normally I’m not a guy for just standard modification to sets but these are quite nice. Good work.

These are pretty good. I’d like to use that scope piece on a larger bow if I can. This just gives me a little inspiration to do that…
…after finals.