Ah yes, I can finally get back to posting MOCs. And hey, I may have actually made a somewhat decent MOC for once. 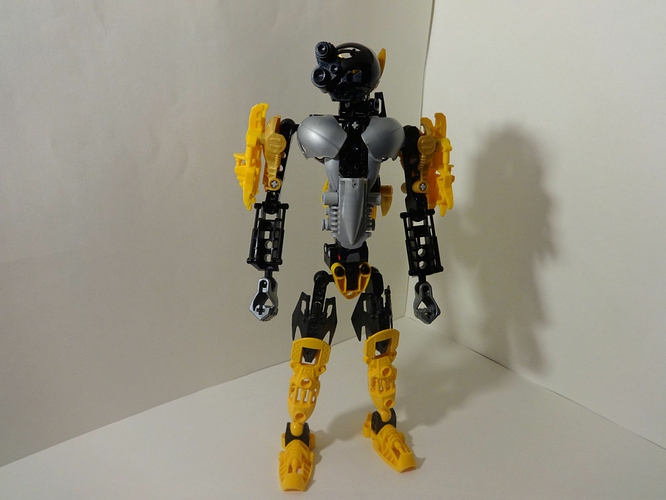 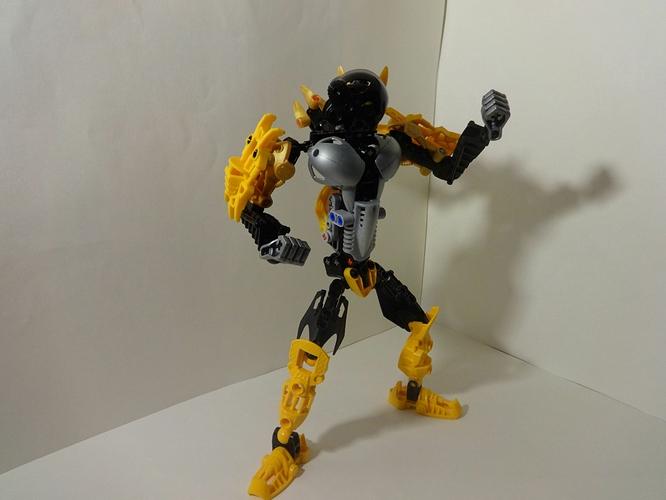 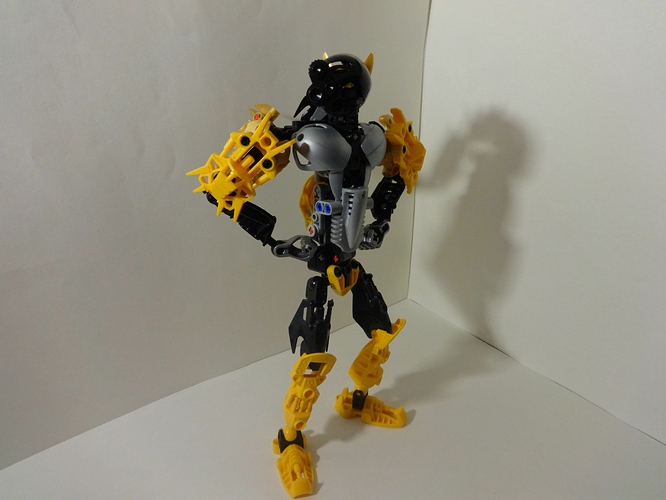 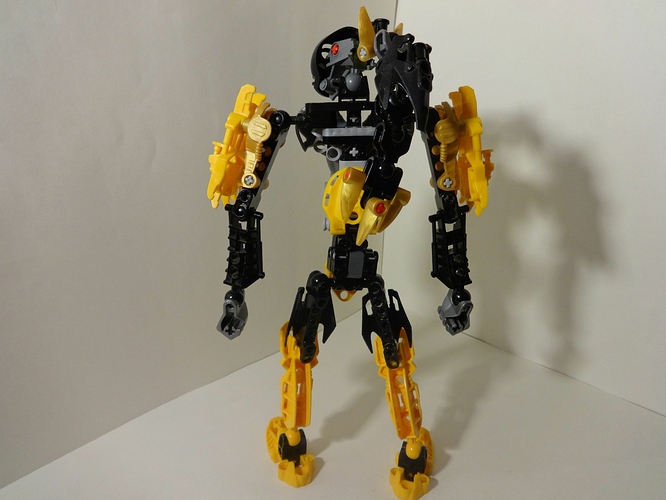 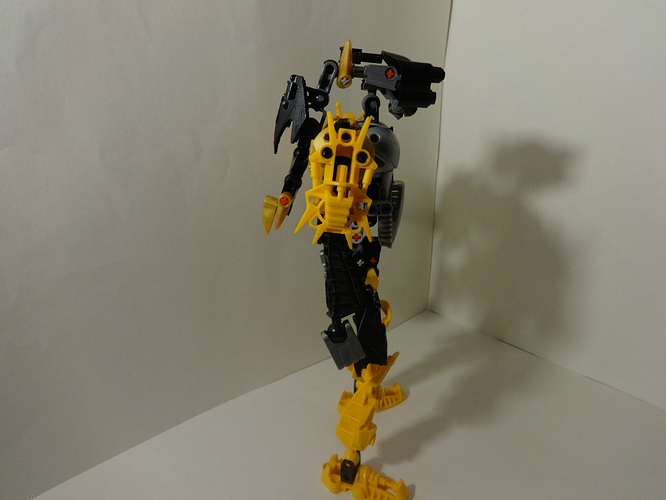 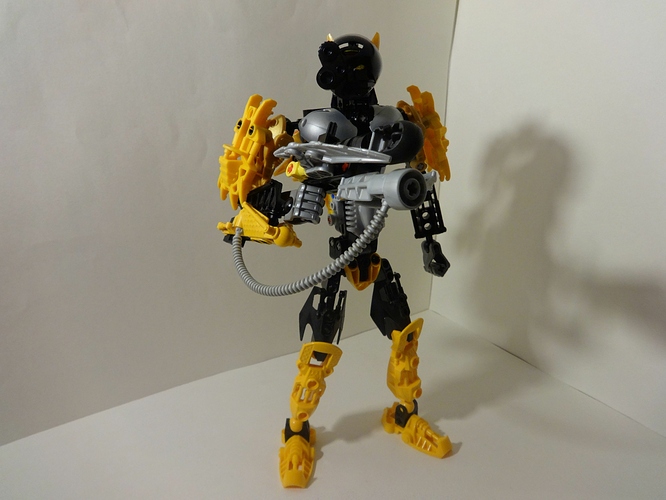 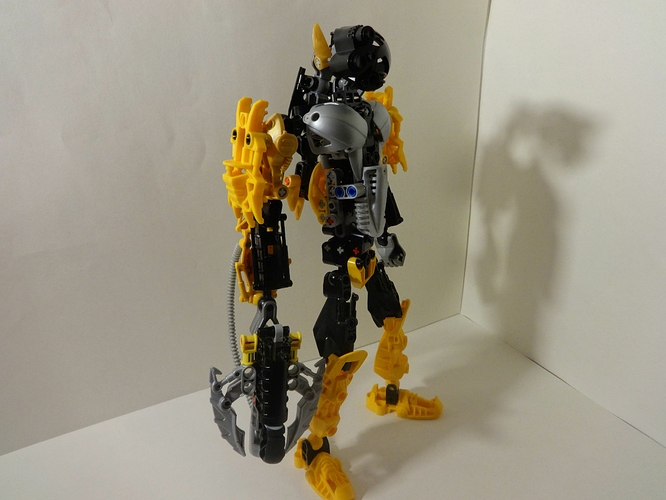 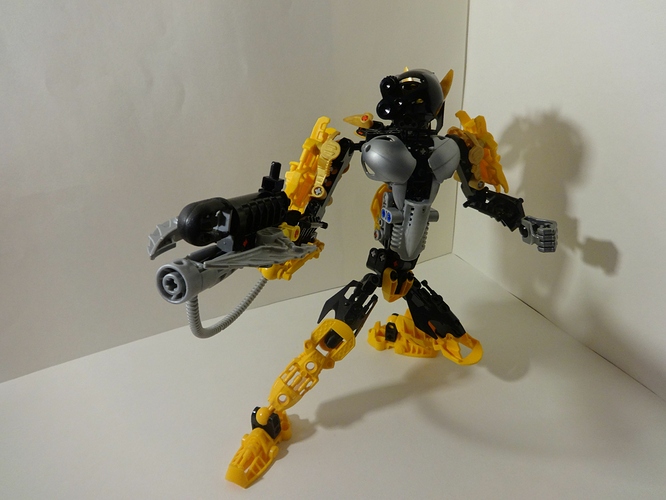 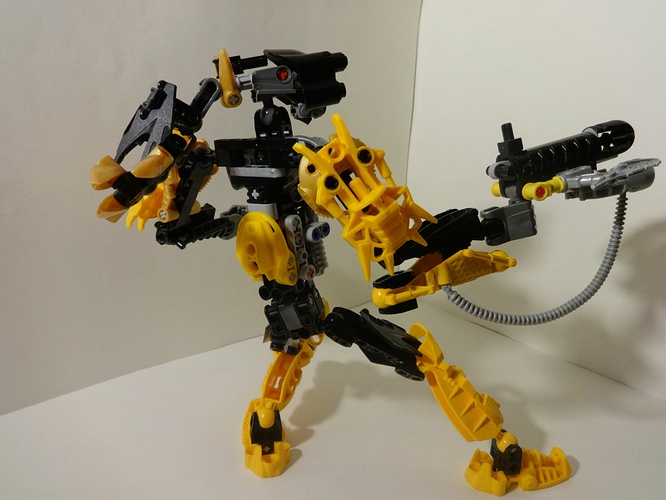 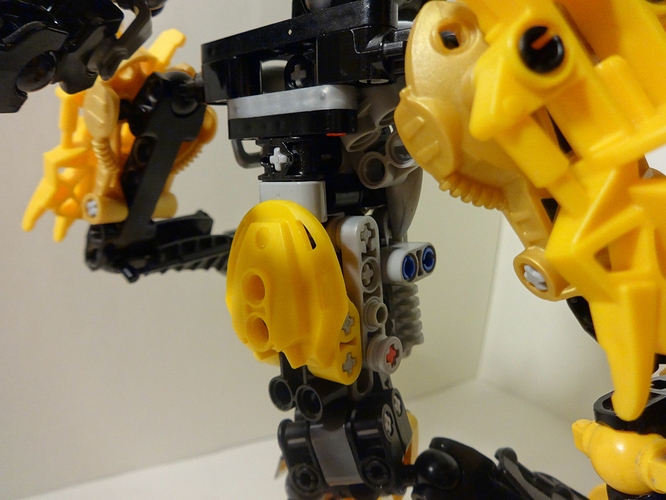 So there are some things I want to talk about specifically in regards to this MOC, but let’s address the elephant in the room: The torso build.

Yes, I know what it has. I did that on purpose. I have been stating for a while now that I have always wanted to build a feminine looking MOC. And honestly I think the torso build I picked up and modified is just fine. The proportions look normal and it legitimately looks like armor.

Now that I have gotten that out of the way, let’s talk about the MOC.

Inspiration: I swear to god that I was subconsciously influenced by Mesa from Warframe. The color scheme and theme is certainly there.

Color scheme: Yes, I know what the typical toa of lightning color scheme is. I think Black and Yellow works. Yellow is usually used to represent Electricity. Now about the gold, I think it fits in with the keet orange. But who knows? I may change it out in the future. And the silver; Chest armor be chest armor…plus gold is a little hard to come by with those parts.

The Akaku: I had nothing else that looked good on this MOC, okay? I was originally going to give Thundra a Garai, but it didn’t look good.

The CCBS: I usually don’t mix Technic with CCBS, but there is enough Technic here to give off the appearance of G1 MOC. Plus I was able to add on the ponytail…so yeah.

Backstory: Ah yes, the Backstory for Thundra. She is a free lance toa of lightning who travels around the matoran universe looking for trouble and crime to bust. With the help of her Vortixx informant and friend, Thundra knows where to go to serve justice. There are many rumors about Thundra floating around. Some say she is prototype toa while others say she was on Lesovikk’s team. But no matter what the rumors say, one thing is for sure: get on her bad side or break the law and you will regret it. Also it should be noted that Thundra has rather viscous rivalries with Tuyet, Lariska, and Helryx. One would think Roodaka would be included in this, but surprisingly no. It has been alleged that Roodaka is Thundra’s informant, but this is the furthest from the truth. In fact, Thundra will be the first to point out how unrealistic that is.

Dang, I didn’t think I would come up with that much backstory…

Anyways, tell me what you think of this MOC. Anything I have said in regards to the build of the MOC is in no means any way to shoot down criticism and critique, I just wanted to provide insight into some of my stylistic choices.

I kinda like this. The midsection seems to armored for the arms.

Wow that side shot, flat is justice I guess.
I never thought a moc with a nuva chest could be that, unclevage-y.
Not even a complaint, I just find it funny.

The moc is alright, doesn’t look feminine in the slightest, the upper arms aren’t great, and hair looks awful, but it’s alright.

I wish she had less gold and more silver to even out the color scheme. Also color layering seems wonky either way, I’d think gold or silder would go ontop of the keetorange

I like the torso build a lot… But the silver does look out of place. I’m not a huge fan of the Inika feet on her shoulders, and I think some custom limbs wouldn’t hurt. I know I sound negative but I really like this MOC… I hope to see more from you in the future!

She’s got hair.
That enough would make me go mad.

Also, there isn’t much of any flow, whether it be textures or shaping. Those Inika feet don’t look good on her forearms, and honestly the textures are quite jumbled.

The MOC could use some silver more spread out, but other than that, it’s a pretty awesome MOC!

Nuvaboobs 0/10
/s
Actually, they work here because they are different from normal.
Other than the body, everything feels a bit basic. Overall, it works quite well anyway. Good job!

The design looks alright from the front, but the back lacks definition.

Overall I think this is good.

I dislike the hair.

ditto. I would use chain net time. right?

I wanted to make a Thundercats Joke
Amazing Moc

Kinda thin, but I think it kinda works

The torso is a bit long. Otherwise, I like it!

The torso is a little to long. But other then that this is a pretty groovy MOC man.