So this is a little companion/pet character I made for Toalittleboehn after I made Debro.
Check out Kelratz for the links. 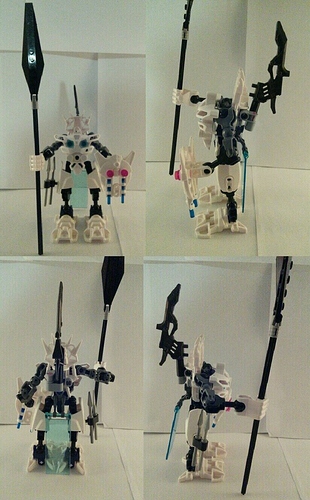 Tiki man was originally made for Toalittleboehn’s mini mayhem contest thing as a pet, funnily enough I was not originally aiming for his design or build but after making him I couldn’t help but keep him, even if he doesn’t really work for a pet (well really companion) do to his design and size (I think… =P ) I still want to submit him just to see what ToaLittleboehn thinks of him even if he probably won’t be used.
So onto the description!

Tiki man, or Tiki for short was found wandering through the woods by Kelratz who then brought him back to live with us because according to him Tiki looked lost, really I have no idea but he stayed and hasn’t left yet. So far much of him is unknown to us such as his background, backstory, what species he is, where he comes from and even what his real name is! (doesn’t help with how he speaks!) what we do know though is quite interesting, he is very tribal and ancient like in personality and such, hunting, sacrifices to gods (or at least whatever he thinks is a god/special being at the time), attempting to make magic mixtures and such (mainly to attempt to ward off whatever “demonic” being he sees), his weapons are also another show of it, using spears, crudely made knives and shields specially designed to look fearsome, he has also been known to do odd dances and such which when compared to videos are somewhat like the actual people who use masks like his.
Another interesting fact about his kind is that the mask like object on him is neither a mask nor his original face and is composed of a type of living metal that is bonded onto his face, from what I have gathered it is a custom of his kind that upon reaching a certain age to have a mask such as his put on, becoming their new face, while it can be removed it would cause immense pain and most likely end in their death or if they survive, turn into a vegetable like state.
Personality: despite old-ish appearance quite youthful in actions, will act grumpy if someone does not understand him or he is not allowed to complete a sacrifice and such, happy most of the time grumpy the rest, somewhat easily angered and will chase whoever angered him yet most likely wont hurt them unless they are actually evil otherwise will most likely just bonk them on the head with his giant spear, friendly enough.
Other attributes/weapons: giant, unbreakable spear/walking stick, two smaller spears and holder for them which is on his right hip, crude, metal knife, scary shield, the mystical tiki shaman bag of magic (as Kelratz took to calling it, which then stuck) on his back, contains herbs and other stuff he collects along with his demon/evil wards (essentially just assorted clear Lego studs he throws at any being with some type of demonicness to it such as Muffy or Vex (if you have to ask why on Vex…)).
will create altars for “god-like” or “special” beings he encounters and attempt to perform sacrifices at them (i.e. anything weaker and/or smaller than him or animal like ones, I have lost so many minifigs to this guy, make sure to check for his altars don’t let him keep them!) he considers creators to be gods or at least extremely close and he considers beings such as Mimi or dragons as blessed beings.

He is actually quite good friends with Kelratz despite how he’s usually angry with him, how many times he ends up chasing him and hittig him with his spear and how Kelratz likes to sometimes act around him (i.e. singing a song but only saying Tiki, just repeatedly saying Tiki, Tiki, Tiki or ztealing his weapons), and also despite the Nekrat situation, really he’s used to it and just throws wards at him
Only says Tiki or I am Tiki/Tiki man… yeah kinda irritating but he somehow tends to typically get his point across and if he isn’t understood he’ll stomp off in a huff and sulk/be grumpy for a while. Typically screams “TIKIIII!” as a war cry or when chasing someone he’s mad at, is pretty funny to watch.
Enjoys hunting… anything… not even joking… while he won’t try and kill other mocs except for animalistic ones, excluding blessed and demonic ones (which he’ll just throw protection “wards” at), uses shield to scare prey or make noise.
Despite tribal like appearance and behavior his build and weapons are advanced, armored body, metal weapons, lights in shield, holo cape-thing on back, it just appears that him and his kind are highly advanced but choose to not use them for their own advancement and such, staying tribe like.
Despite mask being impossible to remove it is also considered to be taboo and quite a bit embarrassing to not have a mask past the proper age. Their masks are alive, they live and will die with whoever they are bonded too. When a mask is alive it feel warm, like touching another being and despite being solid when feeling it, it gives off a liquid like sense, of slightly shifting and squishing. When mask dies it does not disintegrate, crumble or melt, it hardens, losing its warmth and liquid feel, becoming solid metal.

So there you have it! If instructions are wanted I will make em and if you want to make your own the body type can change, only important stuff is having a tiki like mask, a small-ish body and building it in such a way the mask appears bigger than it is on the character, like Tiki man.

Hilarious thing is that I even made him, I’m running out of parts and he is essentially a tablescrap moc! XD 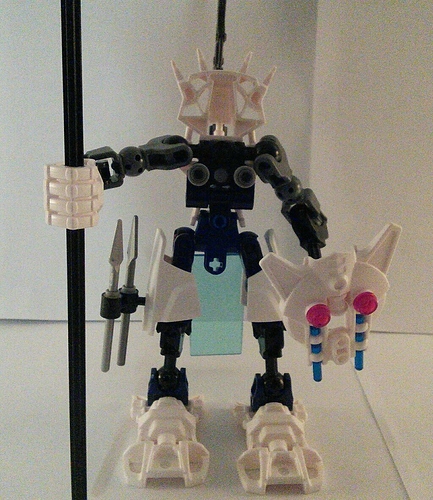 I didn’t even know this was there till I was fiddling with his body and took the mask off. The hilarious part is that it perfectly matches up with the face on the mask and works so well for his description (which I came up with before this!) 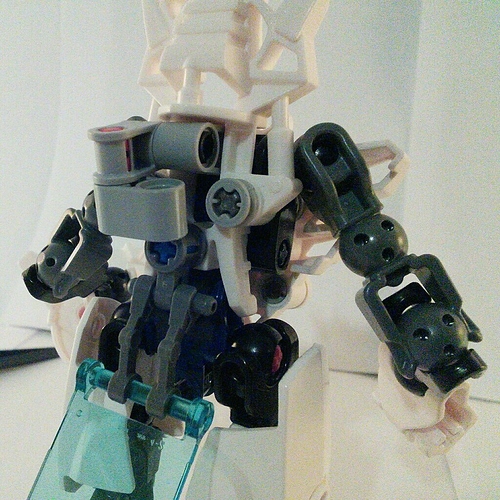 Just his weapon holder and how to attach it. 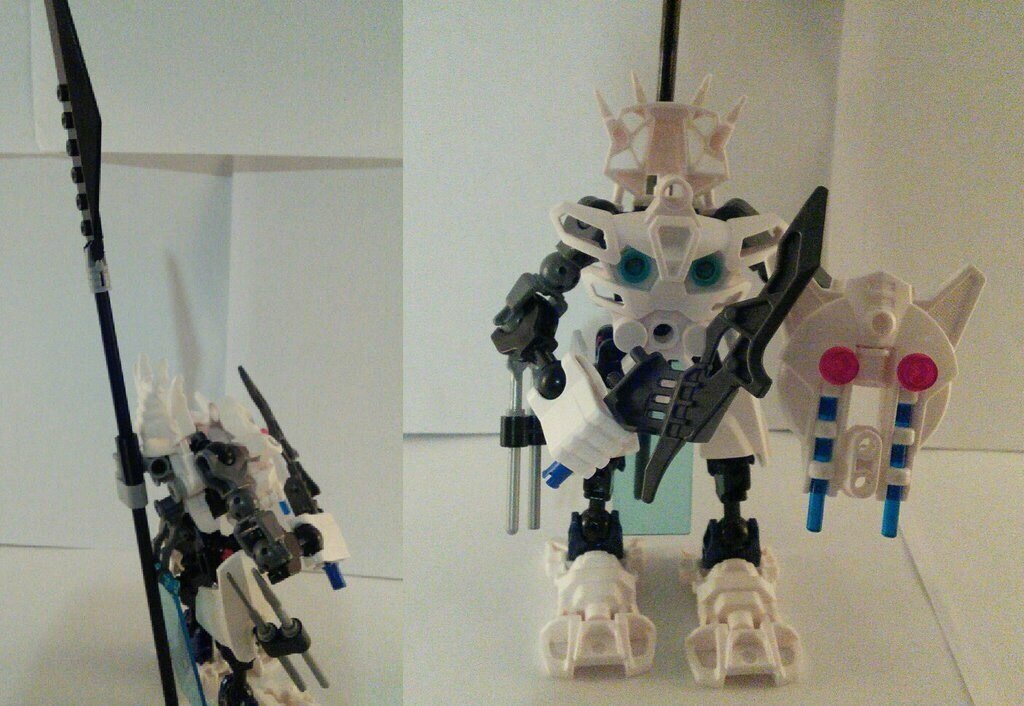 As you can now see his holder can also hold his spear.
If anyone is wondering about ths gray peice that is supposed to represent the handle where he holds the weapons… works better than removing it.

Also if you wish to know how to build him let me know and I’ll put a link to where I put up instructions for him.

Nice concept you have goin so far. The windscreen on the back doesn’t cut it as a “robe” if that was what you were going for

@Rockho ah I don’t really know what I was going for with that windshield, just thought it looked cool, you gotta admit it does.

@Square Well I only had a white peice for his mask so I went for a good colour scheme for that, blue and white was what I was mainly going for but the black and grey peices work, remember this is bionicle and they come in all types of colours so this would only be one of tikis species, there would be many others who would actually give off a tiki vibe and many who wouldn’t, I just went for what I could.

The lack of colors doesn’t give enough of a Tiki vibe; the mask is still not enough though-
Only things that stick out are the weapons.