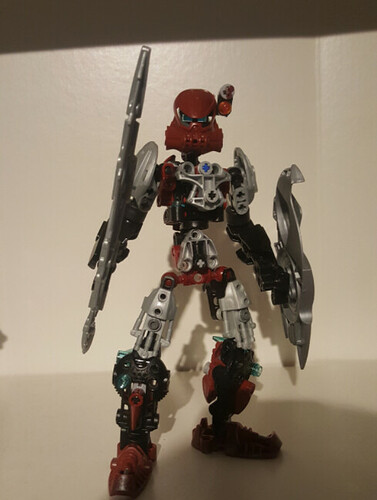 image489×648 52.6 KB
so since i started gettin back into bionicle again a few months ago and cause is the first time ive ever posted my online, figured i might as well start with where it all kinda began for me. back in 2006/2007 i made the first moc i can ever remember. it started out as my own version of vakama cause i was obsessed with the second bionicle movie and never had a toy of his . over time though i guess i just wanted him to be my own character (cause for some reason i wanted my own character for everything i got into), so i took the inika name, and just used that. (aint gonna change the name ever, but i did change the way its typed, so guess theres that)

so then i ended up with this thing 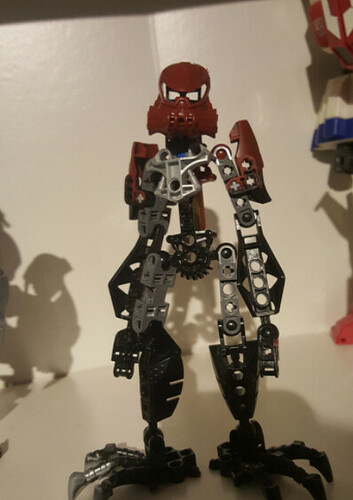 i dunno how accurate this is to the og thing, i mean i was like 6 or 7 when i made it, but i think this is about right

whats kinda funny i guess is that this design specifically didnt stay around that long, i started from scratch again when the glatorian wave came out, and that design has pretty much been the base for every other enyka moc, and my dumb ■■■ never saved any pics of any of them.

anyway, so about the actual moc 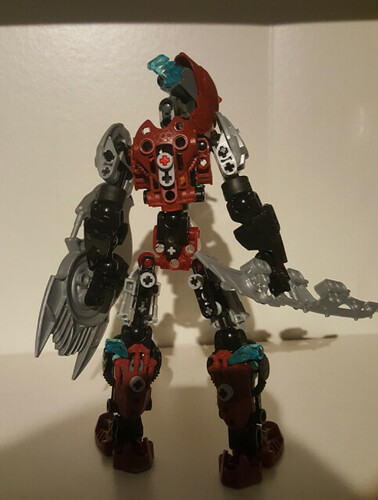 the weapons and mask are pretty simple

this sword design has been around with enyka ever since the glatorian version. its really simple but i think it looks cool. figured it also made sense for him to have this sword again, since for what little i got of a story for him, this is him just startin out

the shield is all new for enyka though. i really like the hagah shield and thought it made sense for enyka story wise. at this point in time, enyka is a total rookie and kinda a bad warrior in general. he only uses the most basic tactics and martial arts the toa teach, but he plays by the books and doesnt know how to adapt to situations or use his abilities in clever ways. he relies to much on what he knows, not his wit. a sword and a shield is like, the most basic type of weapons for a fantasy warrior, figured it made sense for someone as basic as enyka to use both

the mask is pretty boring, its just a standard huna. normally for all my mocs i like to either use 3d printed masks or painted masks. masks are always i guess the cherry on top of a moc. problem that i got with that though is that from 2004 forward, bionicle masks got pretty limited. before you had most masks at least in 6 colors, most of those colors didnt belong to any existin character. but after 2003, masks only really came in one color, maybe sometimes two. so whenever someone uses a mask from that time, like mahri jaller for example, that mask will always belong to jaller, and i guess for me i that just kinda takes away from at least my mocs

i did actually wanna use a 3d printed mask on this guy, but the one i picked didnt really work out for him and i ended up resuin it for his matoran form (whenever i make a post about his matoran form i guess i can explain what was wrong with that mask), so i just went back to the huna for him. didnt want it to just be the generic huna though, so i added some kinda scanner thing or whatever to make it stand out a little. i have a battle damaged custom huna somewhere, so maybe ill use that on him whenever i find it

my own thoughts on it

this is kinda the startin point for me now that im back into mocin: skinny toa type designs. ive made like 4 of em already. i guess why is cause most of the time i start out with a small technic piece and just go from there, if i use a really small piece as the startin point, chances are the rest of the fig aint gonna be that big. for the most part though, i think the build is fine. i dont really know how to talk about my builds except to point out what i dont like, so ill just list what i dont like
-no armor on the back of the upper legs
-some technic pieces inside the torso are colors that dont blend in like brown or brigh red
-flimsy feel (this is pretty common for these kinda builds, since a lot of the pieces only peg in one way, so that means they wont be super solid. for example the upper legs only peg on on the top, so the lower legs kinda move a little)

none of this bothers me that much though, so ill just leave him as is

He actually doesn’t look that bad, the hint of trans-light blue is nice.
Also welcome to the boards.