Hello there, first time posting here, not used to forums anyway, but I couldn’t resist submitting my creation for the contest.
Here’s my take on Toa Helryx.

My point while building it was : how Lego would have released it as a set ? I prefer when the various builds in my Bionicle collection are visually consistent between each other. That’s why I went for the good old Metru body, to make it look as a set from the canister, with a few more details.

While there was not much room to follow the canon, stating it is a frail and ancient Toa, I always felt that wearing a mace is a strong character feature, especially when holding a great shield.

As you can see, the build is very simple, balanced and strong. The use of gears on shoulders is a reference to the Mata build. In fact, I tried to put a spiky theme for her to fit her tool. Even the use of Piraka thights armor is linked to this idea :

There is no particular function for the arms like Metru body are supposed to. To help the posability, I removed the gears and put a ball for articulation directly on the shoulder :

For those who know me, I love 3Dprinting. There was no way I couldn’t present something completely original for her. As promised, no more than 4 printed pieces : a mask, a shield inspired by a mirrored version of the protosteel one seen is the sets, and a spiked mace coming in two parts for a better playability. The mask itself was an attempt to reunify the Mata, totemic vibe, and the Metru modern lines. Coming from ancient times but still in touch with the best techniques and equipments to achieve her mission.

(What a shame the rules didn’t allowed the use of printed pieces for other purposes, because making the mace in two parts was originally intended to create a pair of spiky shoulders armors and accentuate the spike theme of the character along with the shin armors and feet)
Here is how to build the mace.

And links to the thingiverse files :

The mask of Helryx, the first Toa. Compatible with both Mata and Metru type heads

This kit includes two parts to build a lego-compatible spiked mace for Toa Helryx. Please follow instructions and use lego connectors to create it. Making it in two parts also allows the builder to use them for other purposes, like shoulder armors as...

I hope you’ll enjoy it !

Certainly one of my favorite entries yet, great job!

I like it, it’s a solid build, though I feel like it’s far too massively dominated by silver.

Mixed thoughts on the figure herself, although it’s definitely one of the entries that I would not at all be bothered to see win (perhaps she just doesn’t match the picture in my head, that’s all).

THAT SHIELD THO
I love it! That is a really cool design, and it fits the G1 aesthetic perfectly. Surprised there haven’t been many 3D printed weapons.

Mace is a bit less interesting, but it’s still cool. I really like the instructions you’ve produced, too (although her thumbnail in those is actually a different build! Is that intentional?)

Yes sure, seeing his own vision in other’s creations is the most difficult part. To be honest I have the same problem with the other entries until now ^^

About the different thumbnail, there’s a simple reason : its a second version of Helryx I made for the contest, because she existed in a first version that the rules would never had accepted. If I had the choice, I would have at least kept the chest armor, at least it would had fit the fact that takanuva never saw this before… 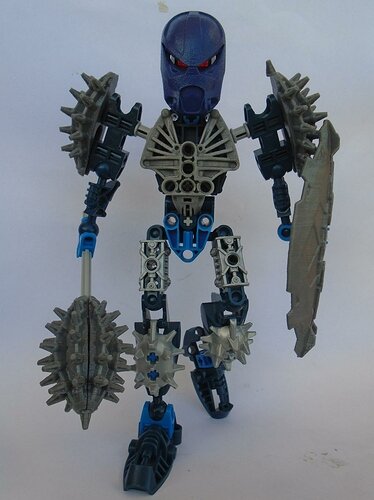 I love the smoothness of the mask, the proportions are pretty awesome as well.