Daioh is the Toa of plasma from the legendary land flying over the iland Tora-kota called Anubin-Metro, Daioh and his fellow Toa Anubin where one’s all Bushido’s warrior who served the great spirite of fate Anubis. Befor Anubis went missing he used his mask of fate to change Daioh and 4 of his friends into legendary warriors known as Toa, now Daioh protects the city of energy Dai-Metra from forces to powerfull for the city’s Bushido’s to handle. 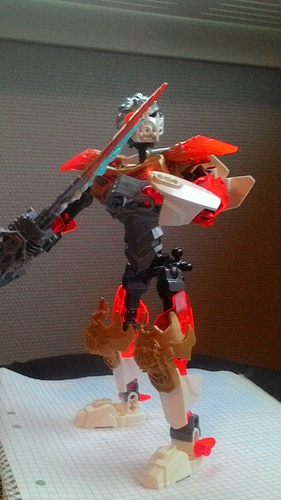 Daioh has the mask of radians with it he can blind any one infront of him for a short amount of time.
His weapons are a plasma sword and a shield that he rarelie care to use, befor transforming into a Toa Daioh only used a one handed sword and so even though he now have a shield he still kling to his old fighting stile thoug if Daioh feels that defense is better then a strong offence he do not have to think twice befor taking out his shield. 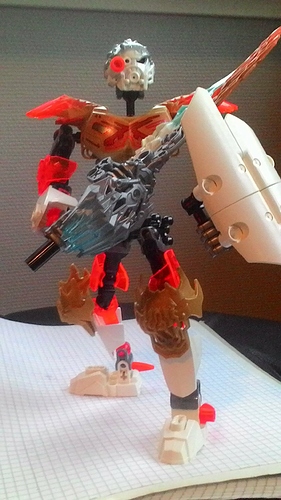 P_20161018_172512.jpg1440×2560 598 KB
(Editors note: so I wanted to make a Toa useing the Translutiant orange/red and white piece’s and this was the result, now I do have a white front armor piece as well and not just this grey one but I wanted somthing to break the white. If you want to see how he looked with the white armor plate on I can take a photo and add it later.

Here are some action shots by the way) 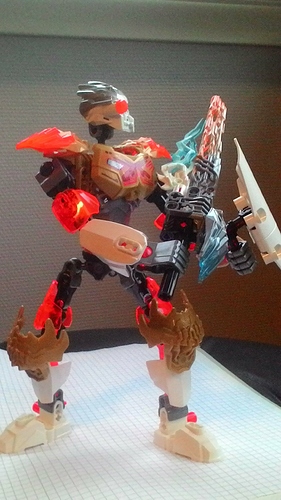 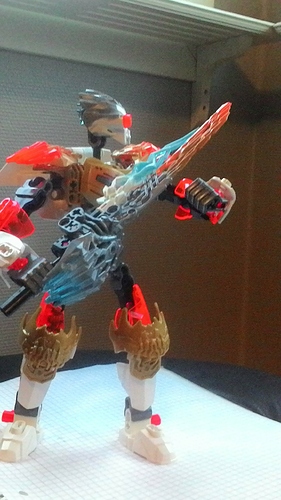 Now for so shots on the back and how you can store the shield.
favorite way 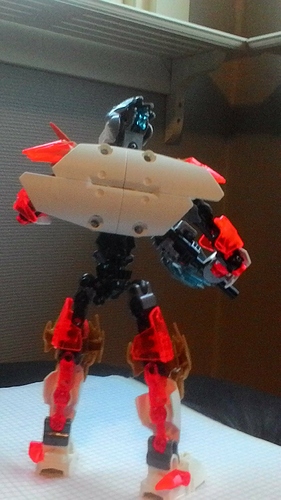 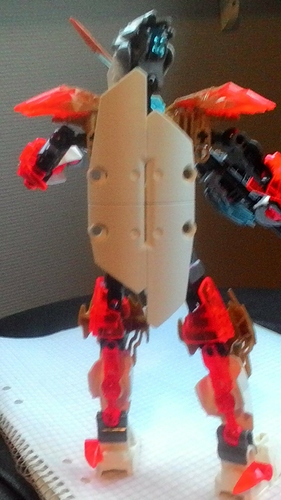 Thanks to the mask of fate the Toa of Anubin-Metro all has the power to unite/combine with a elemental creature. Daioh’s Partner is named Daicore and is a Dragon Rahi the elemental creature of plasma.
When combind Daicore acts like wings for Daioh or make it look like he has a cape.
When a Toa combine with a creature they are given new powers and traits they normaly dont show signs of. in Daioh’s case he gets proud and a show off. 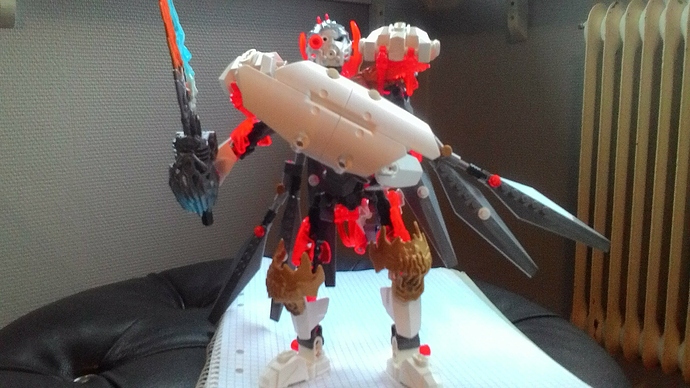 Here are some action shots of them combined.
1 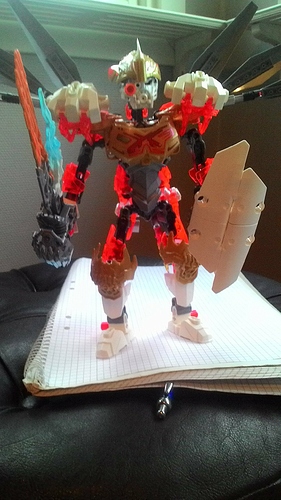 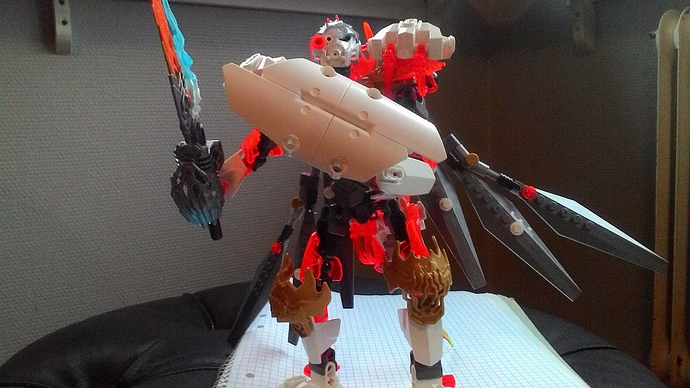 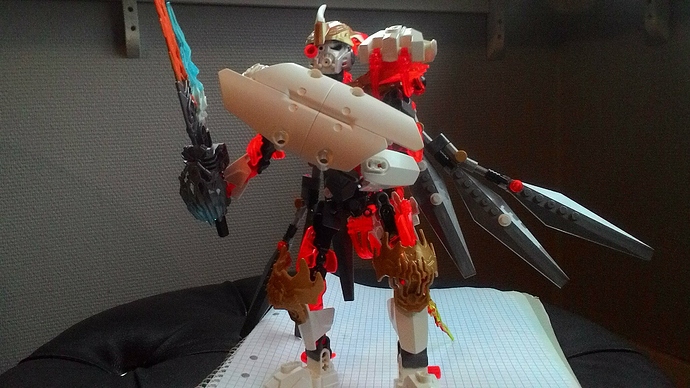 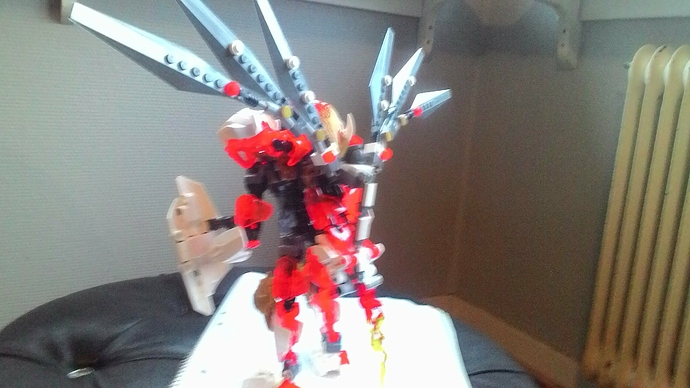 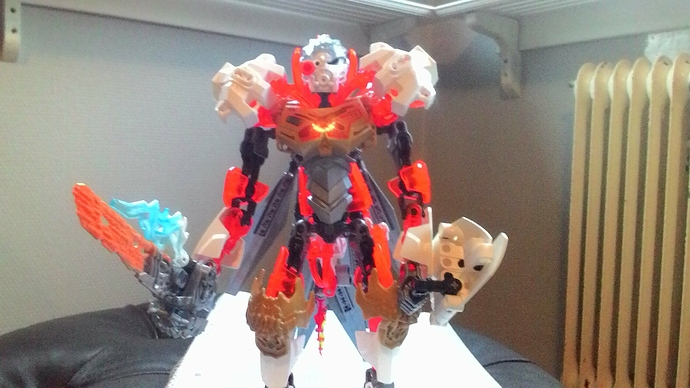 His unity/combination port had to be changed up a bit because of how the shoulders are made, so here is quick look at that. 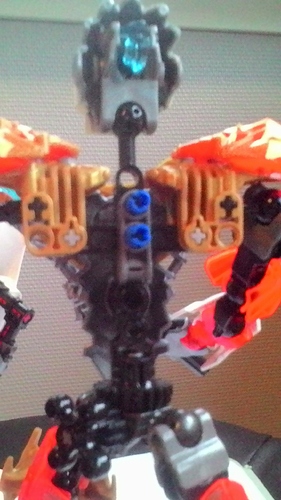 Finaly for more information about his Partner Daicore check out this post right here.
http://board.ttvchannel.com/t/elemental-creature-of-plasma-daicore/30298

It’s a fairly decent moc, but I think you should have different armor placement on the legs and arms. It looks kinda awkward. I also think you should be a bit more creative and with the design of this dude. He sorta just looks like Kopaka with differently colored armor. But other than that, it’s pretty good!

It’s kind of interesting in some spots, like the shield, but other than that it feels a lot like a Tahu and Kopaka mashup.

He sorta just looks like Kopaka with differently colored armor. But other than that, it’s pretty good!

but other than that it feels a lot like a Tahu and Kopaka mashup.

I dident want to use the skeleton/body from gen2 second wave I wanted to use the normal one insted but did not have any left, so I had to go with this opption insted, and that restrikted me a little, as for the armor piece being moved well at first I did have it the other way around but the white piece’s got in the way from articulation specialy in the arms.

Also I wanted to make a Toa that could seem like it would have been part of the second wave, the other Toa I have made after this guy is diffrent as I belive that just like humans they all look diffrent in some ways, (also speaking of parts right now most of my piece’s come from the star wars line of CCBS)

(at the moment I’m running out of most of the parts I have, soon I will only have translutiant blue and gold left)

Well if you’re running out of parts, you can buy lots from eBay or BrickLink. On to the Moc, I think you should add some third color so it doesn’t look like the love child of Tahu and Kopaka

eBay or BrickLink. On to the Moc,

Well I have no clue how to pay on bricklink as I dont have paypal and only a mastercard, (also live in sweden but thats beside the point) and my income is not steady at all as I dont have a steady jobb at the moment I have one but I will get fired in 6 month because of them not having the money to keep me as a worker, and so I’m hunting jobb like crazy.

the third color was meent to be the grey one like I said I did take away the grey color and added more white but feelt that I still wanted to break away from the white more and this was the result.I can take a picture of him as he was befor I added in the grey to show the diffrence if you want that, but at the moment I’m happy with how he looks and in the end thats all that matters though I am greatfull for all the hints and pointers you all are giving me this is one Toa I dont have plans to change (so far only two moc have been changed after being given lots of pointers for upgrading them)

Also am I wrong or have you commented on every one of my mocs so far?
Kinda feel like I have seen your avatar befor on some of my other creations

I have actually seen all of your mocs and commented. Also, I wish you best of luck in finding a job.

Thanks, and cool so what do you think am I doing any improving

I’d say you are improving with the quality of your mocs. The more you practice, the better you’ll become.

I LOVE this Moc. the colours look a bit jumbled at first glance but with further inspection I realised it isn’t that bad. It is a plasma toa after all. Actually that’s another thing, the plasma element isn’t used all that much so it is good seeing something uncommon. The weapon looks good, same for the shield, I like the fact that mellum now has wings, quite interesting. Overall, great MOC!