So, here’s my most recent MOC, Pakuru. He’s a member of the Toa Tokawa (of which me and MrDesert are a part of), a Toa team originating from Spherus Magna. He wears the Kanohi Huna, Mask of Concealment.

Pakuru used to be a regular De-Matoran from the Tren Krom Peninsula. A courageous spirit, he always desired adventures, much to the dismay of his fellow Matoran. One day, he decided to pack up and sail around the Universe, living a life of adventure.

While exploring Le-Wahi in the island of Mata Nui, he encountered a Ta-Matoran cornered by a small pack of Muaka. Pakuru, utilizing a spear he found during one of his adventures, managed to wound one Muaka, scaring off the entire pack. The Ta-Matoran and Pakuru became great friends after that event, with the Ta-Matoran showing him around Ta-Koro and teaching him about forging, eventually becoming Pakuru’s mentor.

One day, Pakuru was approached by his friend, the latter holding a strange object in hand. The Ta-Matoran, in an act of kindness, handed Pakuru the object, which turned out to be a Toa Stone. Pakuru initially refused to accept the stone, but he eventually accepted it after his friend insisted repeatedly.

Several days later, Pakuru received word that his friend was assassinated by another Ta-Matoran named Vultraz. Pakuru, deeply saddened by this, decided to approach the Great Temple and become a Toa, in order to avenge his friend and teacher. Once transformed, Pakuru showed little interest in meeting his fellow Toa, and decided to head out alone to find Vultraz.

Pakuru ventured across many islands around the Matoran Universe, slaying hostile Rahi, Makuta, and other creatures without mercy, due to the heated rage inside of him. The only image in his head was Vultraz, and his only desire was to see him suffer. He continued to hop from island to island, leaving a little bloodshed in each one.

Eventually, his anger led him back towards his village of De-Koro, at Tren Krom’s Island. Upon coming near his hometown, a shrill noise struck his head. As he proceeded to crouch and groan in pain, he looked towards the village, and saw the other Matoran from the village lying down and screaming with agony.

Upon further observation, he noticed that the perpetrator was none other than Vultraz, now turned into a Shadow Matoran. Pakuru, enraged after seeing his old friends in pain, began dashing towards Vultraz’s location. He then stopped in his tracks as he saw another Matoran, wearing a Volitak, attempt to fight back against Vultraz. He continued to watch, until he saw the Matoran be defeated by him. Pakuru proceeded to dash towards the location, firing a sonic blast from his Shotblade, and lightly wounding Vultraz as he was preparing to kill the other Matoran. This attack prompted the Shadow Matoran to retreat, much to Pakuru’s dismay.

As some De-Matoran proceeded to recover, Pakuru helped the heroic Matoran heal and recover his mask, which fell off of him when Vultraz attacked. This Matoran reveals himself to be Mazeka, who was also a student of Pakuru’s late friend. As Mazeka gets ready to leave with Krakua, another Matoran, and a disguised individual, Pakuru proceeds to leave the village, waving goodbye to his old friendships and his new acquaintances.

Pakuru traveled back to Mata Nui, now calmer and with a far weaker resolve, now knowing that he is not the only one suffering from his friend’s demise. He then journeys to find his fellow Toa, and aid them in their quests as a valuable asset to the team.

Now that the story is out of the way, have some pictures! I gave Pakuru a silver Avohkii to compensate for my lack of a silver Huna. I’ll make sure to update the pictures once I obtain one.

If he looks kinda bare-bones to you, that is due to my current lack of parts. 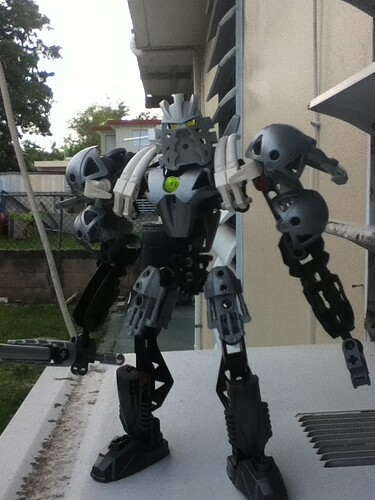 The Toa of Sonics himself! 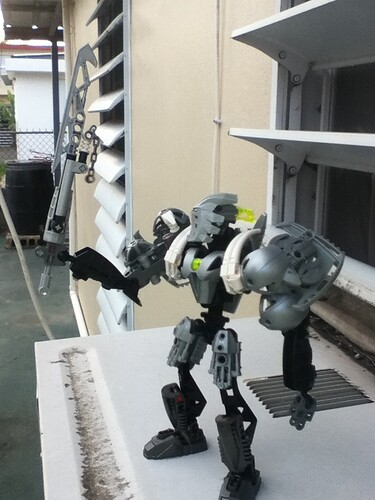 He wields the Shotblade, a weapon capable of firing loud sonic bursts. 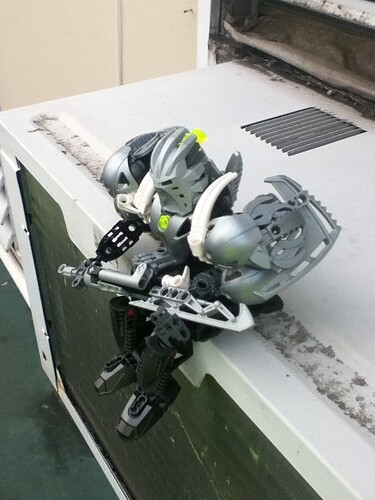 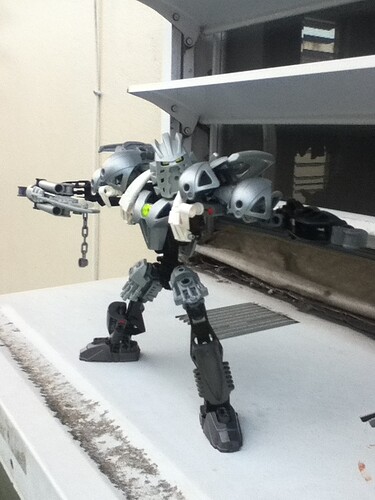 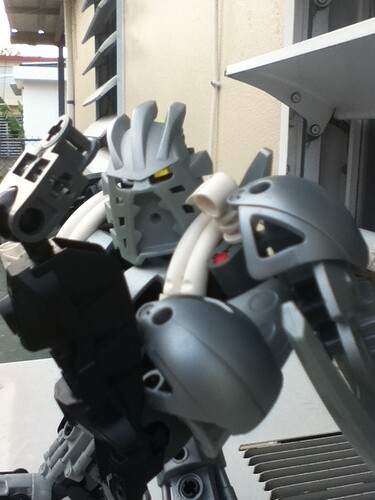 So yeah, there’s my self-MOC. Feel free to express your thoughts about it, and tell me what I could to to make this better

Avhokii is incredibly overused, but since you're aiming to get him a different mask that's okay.

Anyway. I'm a bit iffy about this MOC, especially in regards to the very bulky upper arms and torso and the skinnier legs. Also, the Nuva shoulder placement on the arms just looks weird. The white and gunmetal look slightly out of place, but instead of suggesting you remove them I'd suggest that you actually add more of those colors, as you don't want to go toward the black and silver cliche.

The white and gunmetal look slightly out of place, but instead of suggesting you remove them I'd suggest that you actually add more of those colors, as you don't want to go toward the black and silver cliche.

The white was meant to be some kind of bone armor, while the gunmetal was never really meant to be there, it was just a last minute addition. I replaced it, but I haven't gotten around to taking pictures of it. I'll see if I do soon

I agree in that his legs look very lacking, I'll see if I can fix them as well.

Oh! I know you said you were low on parts, but like, 2 Hordika Necks, 2 Balljoint pieces, and 4 Bohrok Skull pieces will get you a really good solid pair of legs.

Nice and beefy. Some armor is a bit awkward though. I'd suggest changing the legs to smooth armoring so they match the torso, and maybe bringing his shoulders in just a bit.

The Gunmetal's nice. It really looks good. the white is what I would change. Honestly, I really like the skinny legs and the bulky torso. It gives him sort of a cartoony look that I don't dislike at all. The Ahvokii does need to be changed. Perhaps a Rode could work well. It's curves would fit the torso's armor quite well, and the color scheme would fit too. However, I think the ligs need different awmor. It needs to be more curved to fit with the Torso's armor.

2manly4me
I dont have anything to say for this moc that hasnt been said already
the legs are being fixed I presume? and the same with the mask?
though that white seems a little outta place try adding more white around the moc or buy silver versions of those parts
otherwise nice moc

The legs are fine. they give it more character.Like a character in Transformers Animated or Teen Titans. Big upper body, small legs. Makes it a lot more distinctive than it would be otherwise. You really made a giant leap forward with the upgrade. The gunmetal still looks a bit out of place, as does the life counter looking thing behind his head. I sort of miss the white though. It gave him character.

I know you already changed the name, but I just wanna say: Dekura the De-Matoran. 8D

Uh, anyway, I really like it, but I think the torso's a bit off in that the uppermost chestplate should ideally be the thing that sticks out the most, of the main torso.

Otherwise, it's complex looking and cool.

If you add more gunmetal, I think it'd work better, rather than taking away those two you have already, but that's just my opinion

Glorious. (Except in some of the colors, like the gunmetal thighs and black forearms.)

Would it be possible to add in some dark grey? Black and silver is really overused… and trans lime is generic as well.