As you know I have a couple of MOCs by now and have been working on a Toa team. As I have not gotten a backstory for everyone, I have them Built. The team is comprised of Okua(my self MOC), Denker (with the old style build) along with Metalios (a Toa hordika of steel), Iluri a Toa of Air, and finally Makina Toa of water. The last three are CCBS builds. ;The lore behind the team is that they were ripped from their Dimension by the Brutaka of this one to help fight in the Toa/Dark Hunter war. After fighting they decided to stay and go rogue as a team. Soon after Metalios was poisoned by Hordika venom, and Ikuri tamed his pet. They sometimes work with the matorian that represent them in this universe.
(when I get the matorian fully built I will upload them)

First is Okua Toa of stone, my self moc and the armory of the team will his many weapons. Okua has a spear/lance, two swords, two poison daggers, two daggers, and a Zamora launcher. He is what the closest thing to a leader since the team decides as a whole what to do. Even with the team deciding the course of action, Okra will take charge on the battlefield. He cares for his team members and is close friends with Ikuri. 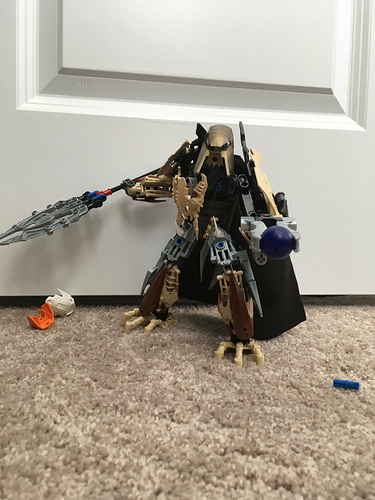 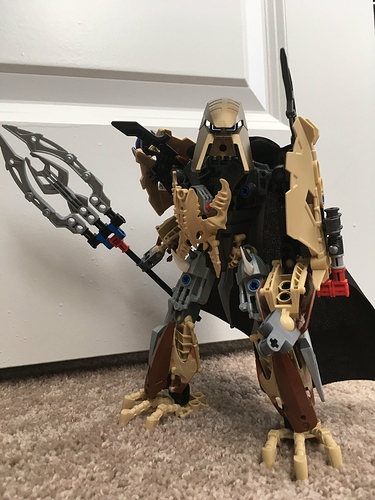 Next is Denker Toa of Earth. He is a ninja, and has gone under extensive training for the title. He is quite and keeps to himself, only speaking when he has someone to roast or something that is worth saying. Since he is skilled in strategy he comes up with most of the teams plans of attack and strategy. 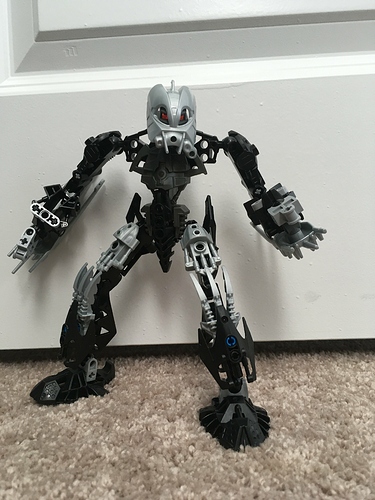 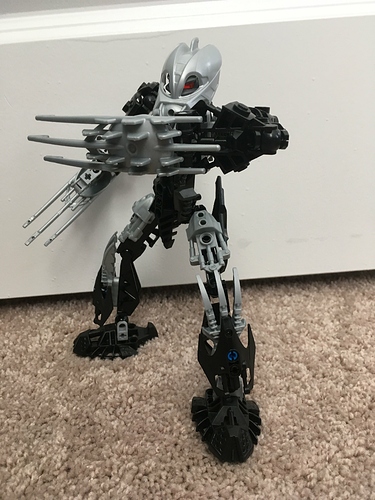 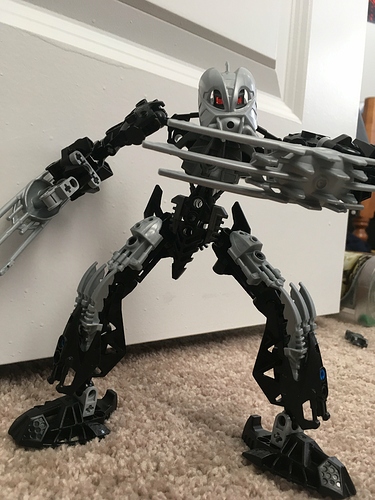 Metalios is a Toa of steel and has undergone Hordika mutations. He is content with his form even though he lost his mask power which allowed his to repair armor and weapons. He prefers the brute strength and horrific form, even with him being reduced to a more primative state, saying the strength and power is worth it. 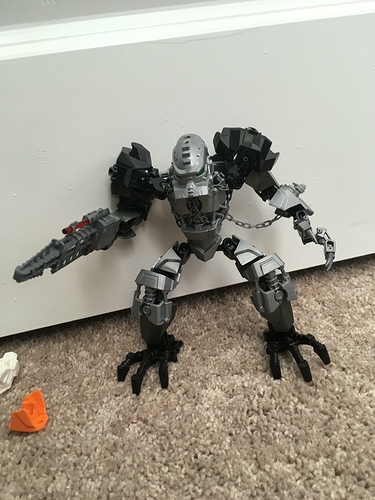 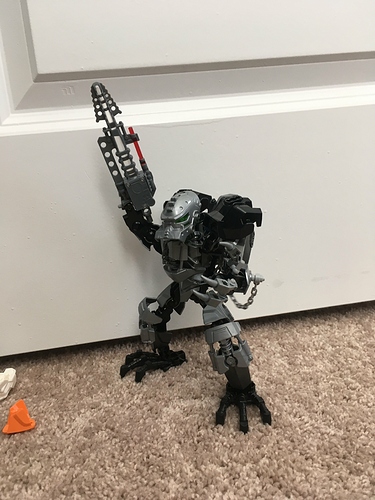 Ikuri is a Toa of Air and I moc I made to be one of my best friends. Ikuri is smaller that some of the others, but he makes up for that in brute strength. He keeps a pet visor that he tamed. He is also extremely skilled in machines and can sometimes be found talking to Makina while tinkering with the teams’ gear or his armor. 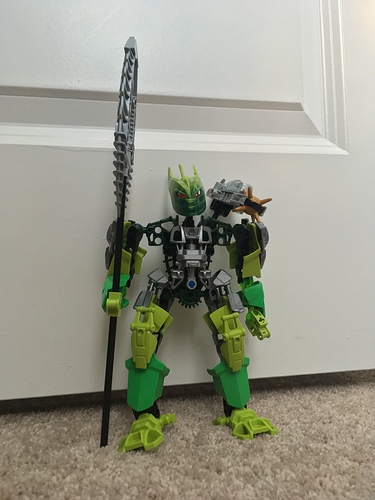 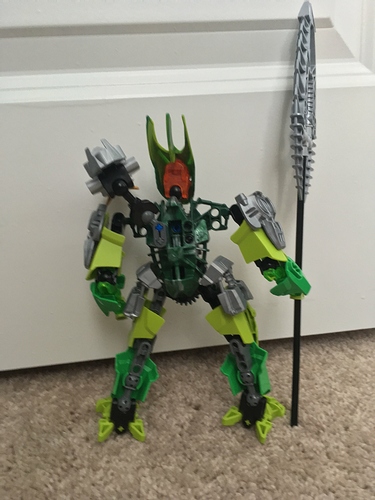 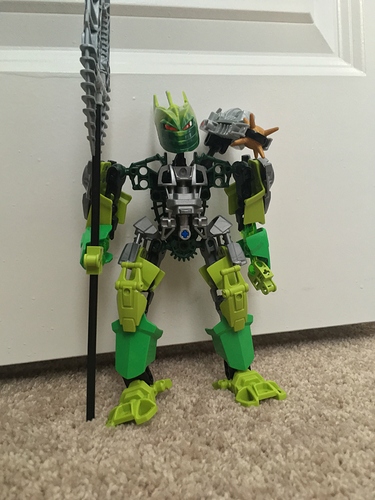 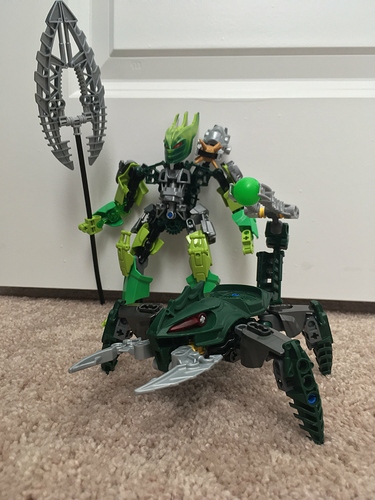 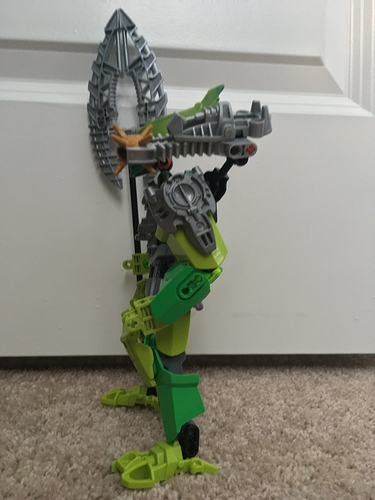 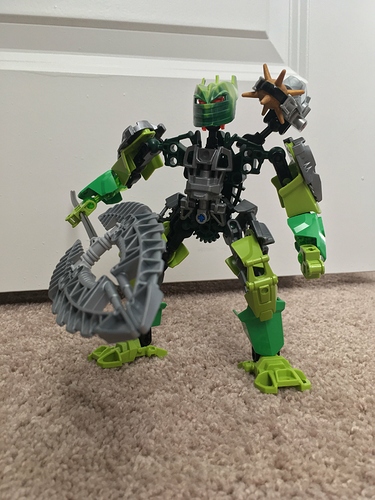 Makina (name subject to change) is a Toa of water. She is close to Ikuri, and they often patrol, scout, and hang out in their free time together. 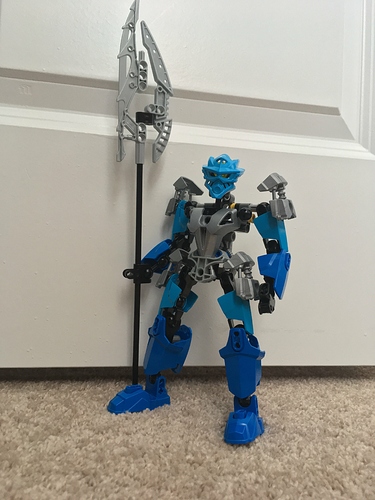 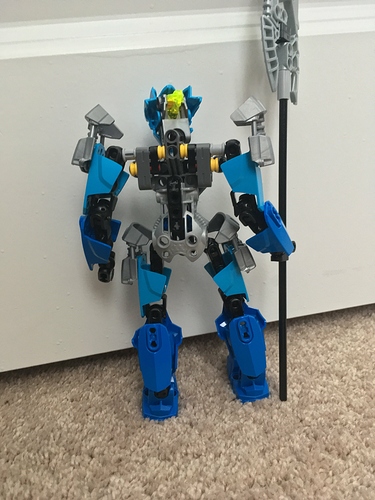 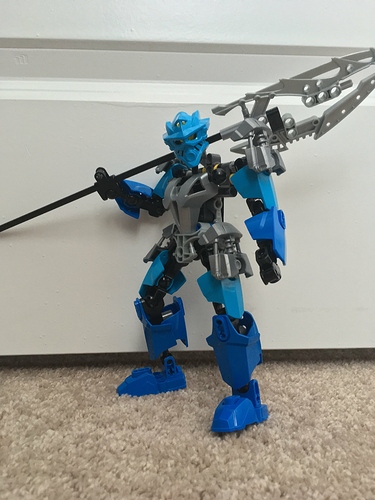 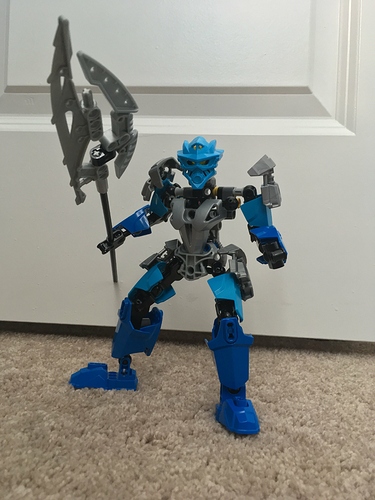 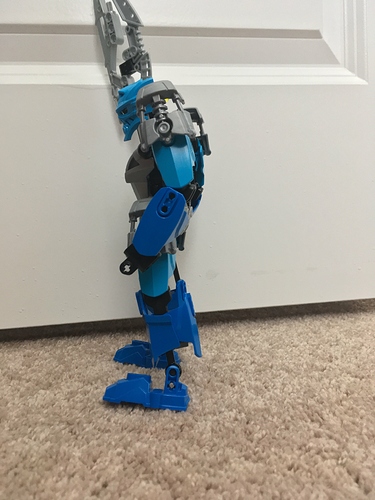 A picture of Okua leading Ikuri and Denker into battle. 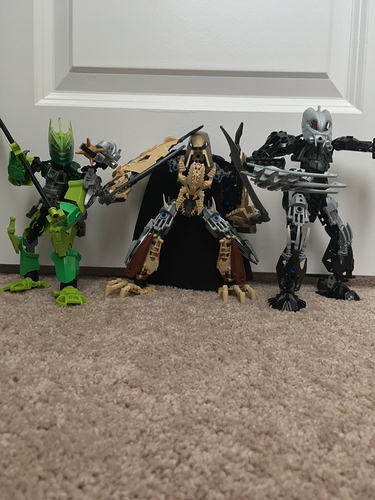 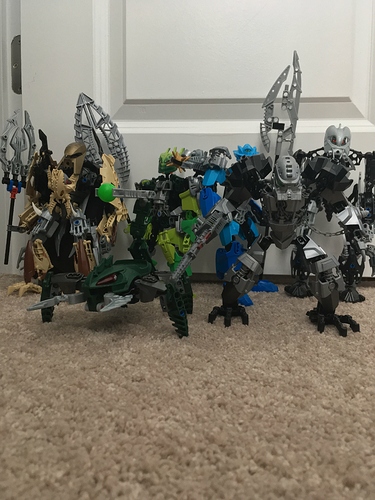 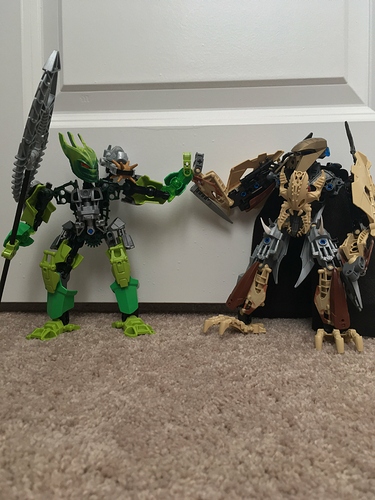 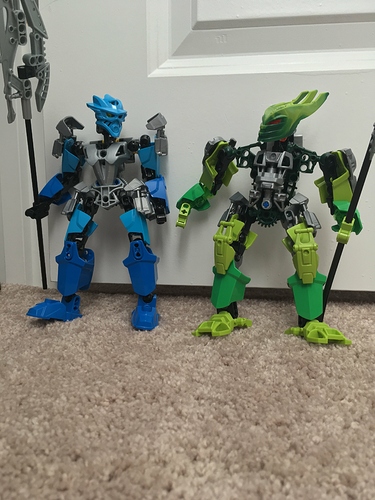 Okay the first one, Nice to see tan again, the head on the chest is really far out so it looks awkward, not to mention that its just slapped onto the chest plate.
The shoulders could use with some refining, they have this red and gray assembly off to the side that looks ugly.

Denker is really wide due to being an inika build, I think you should slim him down and make him look like an assassin by having him not look so clunky.
The head is also too low.

Metalios looks alright, though I think a change in feet would look better.

His mask allows him to fix weapons and armor.

Makina looks like a gali downgrade just like Ikui but at least you tried harder with the torso, however the torso looks really unfinished and is full of gaps, and the shoulder armor looks pretty bad as well as the way the armor on the lower arm is positioned.

My best advice to you for getting better is to 1. refine ideas, know how the build of the moc should change their character, like the hordika dude not being able to use mask powers. Does this character find it to be a good trade off for the extra strength? even if they loose mask powers and become more primal in nature.
and 2. try making more custom builds, like torso’s or legs, those help make a moc look a whole lot better and improve your skills as a mocist.

These are awesome, and Denker especially looks a lot cooler than before. The idea of Ikuri having a Visorak as a pet is also really nice.

@Rockho is a Toa of steel and has undergone Hordika mutations. He is content with his form even though he lost his mask power which allowed his to repair armpit and weapons. He prefers the brute strength and horrific form, even with him being reduced to a more primative state, saying the strength and power is worth it.

On a more serious note, though, these are some fun little MOCs. There’s some nice concepts and colors used here, but I feel like some of the MOCs are a little awkward, such as Okua and Makina.

his to repair armpit and weapons

Pffft! That autocorrect!
But still nice builds for most of these and it is fun to see someone else who has developed a toa team and made the Mocs for them (sure some of them still need descriptions but awesome either way!).
I have my own… Which has yet to be uploaded fully but will be!.. Later…

Make sure to finish up those descriptions and keep up the good work, also hey another character that had their own inspiration from one of the original Toas! (i.e. They heard about the original Toa’s and found one they prefered so they kinda made themselves like them.)

Hey guys just letting everyone know that I have made some minor and major modifications and that those pictures are uploaded. I can not wait for some feedback!