Tordax The Reaper Makuta of Blindness

Tordax came from a world where the Toa just called him Makuta Reaper, in order to flee from the the Toa who where on the brink of defeating him he used his scyte of space to create a portal to a new world in this world he was fast deafeated by 7 Bushido’s and the great spirite of light Pandora though in his deafeat he also killed 6 of the Bushido warriors and wounded the seventh one, who also died after hidding and powering up the mask’s that where worn by the 6 Bushido’s into golden Kohai mask’s.
In this world Tordax was given the name Makuta a title meaning he of shadows.
After his deafead Tordax body and element changed. 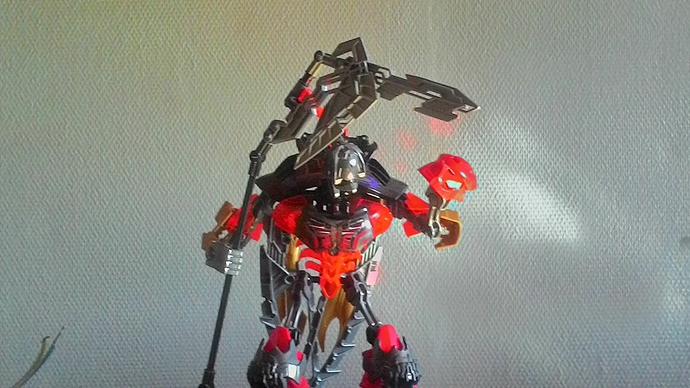 Tordax where’s the mask of Blindness he might be blind but dont leet that fool you he use’s Eco location to find his pray and with the mask power he can turn any one around him blind as well stealing there sight from them.
In order to use his mask it robs him of his sight. 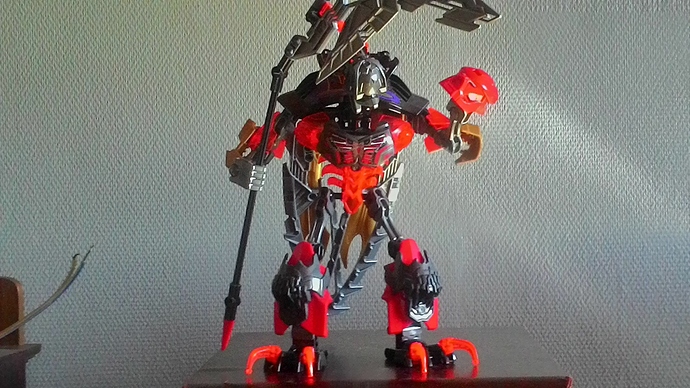 The sight has two forms the form he use normaly have the power to creat black flame’s.
But in it’s second form it is has the power to control the space around it’s user, thanks to Tordax use to move to this world it can no longer be used to create dimention portals. 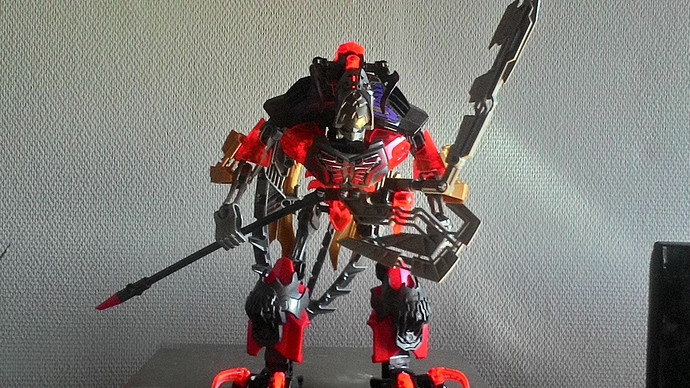 Tordax took this form after his deafet as proff of his burning hatred for Torakota people and to make shure that they will always feer him, as a result of his hatred the fire element he now has turn all the flame he creates is black. 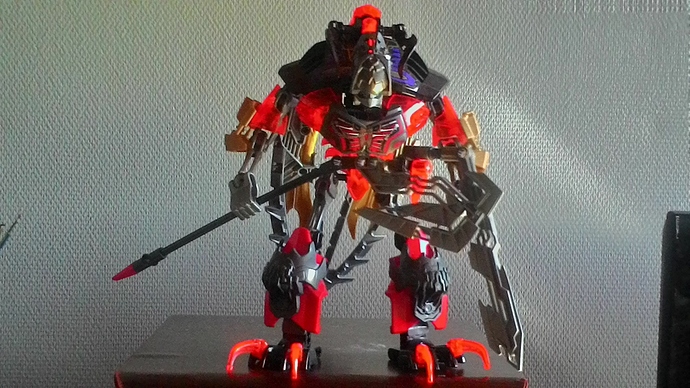 What seems like a mantle down his back is in reality wings making him seem more like a demon from nightmare’s and the horns over his head is his tail, 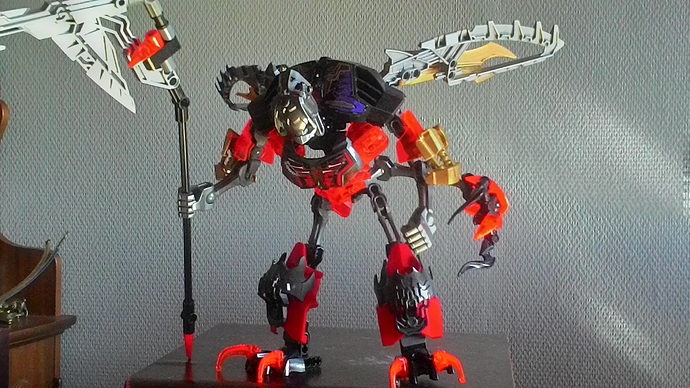 His skeleton body is made from a mutation after he tried to absorb a skeleton warrior. 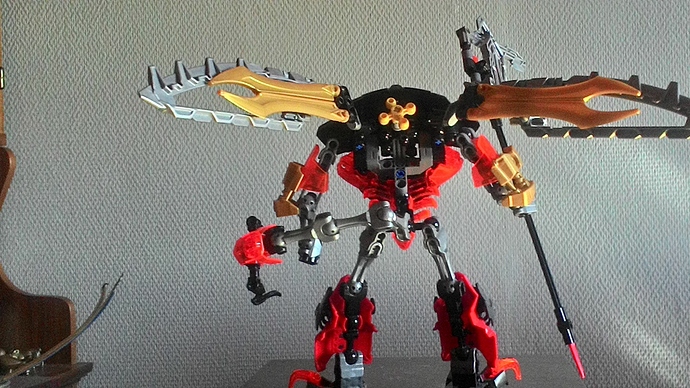 Q and A
Q: Why the purple when he is red,gold, silver/gray and black all over?
A: Well when I buy a new bionicle I kinda want to build them first, kinda made the misstake to add the marks for both Onua and Kopaka (and dont have the money to buy a new Onua, and cant find one either)
(more awnsers and quetions adds later) 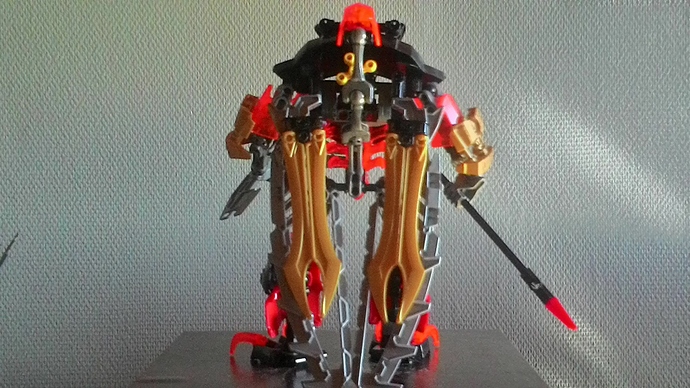 This is not Tordax final form I plan to give him a new form wearing the mask of power (if it gets out) or the Anubis mask as I like to call it (that is the real mask of control) just havent come up with a new form yeat.
To finish of this post here is a picture of Tordax CCBS form and his original form. 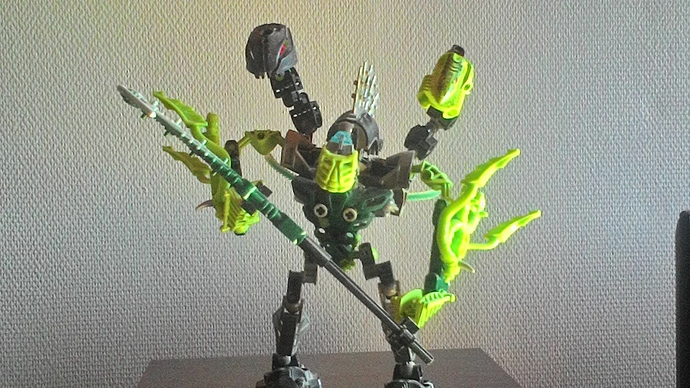 That feeling when you misread this as Mata Nui Garlic.

The Reaper doesn’t feel all that amazing to me, but I like the green one. Reminds me of a MOC from the good old days.

This looks pretty good, but there are a few criticisms I have. First, his limbs look a little skinny when compared to his bulky torso (which looks pretty solid. A little gappy in the neck area, but overall not too bad). Maybe try experimenting with some custom limbs for him. Second, you combined gold and silver AGGHHH I want to die…

/s it’s not that bad, but it sticks out a little to me. I don’t know what sort of parts limitations you have, but if you could I would replace all of the gold with silver, just to make it look a little cleaner.
All in all, not a bad MoC.

Thanks, and yeah I do have a part limitation, at the moment I only have one silver piece thats not being used for other mocs though I do have another moc who use silver and gold could always take away the two silver piece’s from him, but this is just his second form in the dimention where the great spirite is Tora Kota and not Ekimu or Mata nui.

Not great, but pretty good.

So I made a recolor of this guy and after some time finally took a picture of it, weird though I can not eddit post to add it in so I had to do like this insted.
If any one complains about this then it aint my problem sins I cant eddit my own post any more for some odd resun.

For the recolor I just took away the gold and put in silver insted as well as a version of the mask. 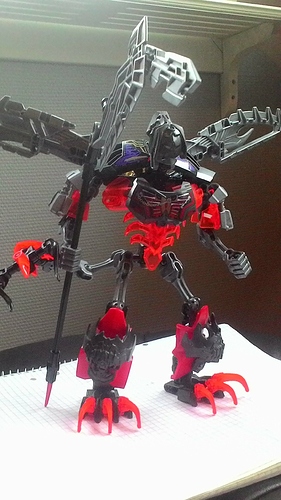