Just general thoughts on the movie and such. i perssonally loved it, and FRANK WELKER AS GALVATRON?! Best secret IMO. Dinobots were a bit of a letdown. Hound is amazing, so is Drift. BB is annoying as always, Optimus is a psychopath as always in the bayverse. Lockdown was Cool, and the human villans too. Stinger was a letdown, and the friggin product placement was EVERYWHERE!

Frank Welker's voice acting was great as usual. However, on the whole, I found it underwhelming. I felt it was a big step back from DOTM, which I always thought was the best TF outing on the big screen. Primarily, AOE didn't really have enough Transformers characters as the other films, and while it would seem that would help with character development, it once again turned into an Optimus does everything fest. It seems like its setting up for more in later films (Unicron perhaps), but I just didn't enjoy it as much as I did 1 and 3. Not a horrible movie, and the action/animation were top notch once again. Lockdown was also a nice addition, too bad we won't be seeing him anymore :[.

Grimlock needed more screen time than he got. Also Lockdown was probably Bay's best villain so far but he dies at the end which suckz.

While it did seem like set up, you have to admit the Autobots had a personality at all, and they talked! That's more then Jolt could say, heck that's more then most one screen bots who get, what, A line. You could assume personalities, like Ironhide being the muscle/ gun dude, but they barely got any lines, unlike the new crew

you mean Murder prime fest? thats what the bay op has become....

Lockdown was pretty amazing, wish he didn't die though. However I suspect that his involvement is hinting at a potential Unicron reveal.

The humans were better this go around, but I kind of wish they had just kept the chick from The Last Airbender and her boring boyfriend out of the movie and focused more on Cade rather then his daughters... underage butt? (Such a weird part in this movie)

The robot designs were spectacular, I'm loving the streamlined look more then the cluttered mess of the first three films, and I'm happy to see that the autobots were given more lines to work with and more personality, even if it was mostly one liners and catchphrases.

The dinobots were cool as heck, I really wish they were in it more.

Overall it was a step in the right direction but I really wish they'd get rid of Michael Bay already. These movies are just begging for a better director, and this movie in particular easily could have been a good movie with what it had going for it had Michael Bay just left it alone.

One other thing: optimus released the dinobots... Into the Chinese country side, stating that they are free... Where are they supposed to go?! Are they gonna run around and tear up farms?!

Hahaha I wondered this too. I just imagine the dinobots wrecking havoc in China while everyone else is celebrating back in America.

You never know... Bay said he'd never do g1 op truck, or Dinobots, and they're here, so maybe he'll go back on the no Unicron thing too. And I hope we see some quintesons in the next film. Also, what was the point of the first 5 or so minutes of the Dino's in prehistoric earth? You would think "must relate to the Dinobots" but it didn't, so why was it their? And why did lockdown have a seed? And the knights thing was just... Ugh.. Poor target and the million silver knight optimus' they have...

I think it's really interesting that this mfovie was brought up on a Bionicle fan forum, as I personally think that we, as a fandom, can really relate to the Autobots. They're past their golden age, their numbers are dwindling, and suddenly there's hope. Now, let's look at the Bionicle fandom. Bionicle is gone. There are not very many of us left, and that number gets smaller every day. And suddenly there's a possibility of Bionicle returning.

I never thought of it like that... crap... You're right.... Also, three weren't any true deceptions, just Autobot's v other robots 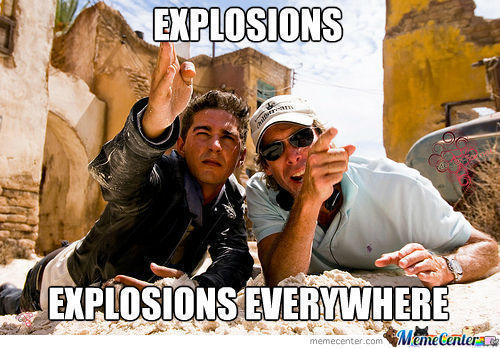 Moving this to Entertainment->Movies Category

I had mixed feelings about the movie. The plotline was interesting, yes, but I have a problem where again and again humans are made out to be the most evil of evil, it gets tiring (No wonder Optimus Prime is so tired of their BS, why did he insist on staying on Earth for 4 movies?) The new human cast I feel didn't change anything at all when you're using the same cringe-worthy attempts at humor as the other movies.

It's everywhere where I'm at now.

It's proof that Michael Bay can make an entertaining movie. AOE is easily the best entry since the first one, because several problems that were present in the first three films were mostly fixed. The humans aren't the main focus anymore (and the ones that are were actually important to the plot while the annoying ones are either subdued or killed off early), the robots are all discernable and well-designed, and the plot was actually rather fascinating. Oh, and GIANT ROBOT DINOSAURS.

That said, everyone is right in that it's WAY too long. This really should have been split into two movies, one focusing on the Lockdown/third faction plot, the other focusing on the man-made Transformers. It would probably make it so that the implied setup for the Quintessons would make a good finale for the new trilogy. And also: Transformium? Really? And yes, there was a lot of product placement.

It's by no means a great movie, but I really enjoyed watching it. It just seems like most critics just didn't bother to see the movie, because their reviews tend to be several paragraphs talking about why Michael Bay is a terrible person, with very little talking about the movie itself.

I felt that there was no need to add galvatron and the vehicons, since they weren't even the primary focus of the film.
And regarding the autobot characters... They all have stereotypical personalities. You're usually supposed to avoid stereotypes when making characters.

The dinobots were also pretty much just slapped in their last second for fan service. They were literally only in the last 15 minutes of the film.

To sell toys* Is the correct answer, not fan service.

I recently saw Age of Extinction and loved it waaaay better than any of the previous movies, I just missed Megatron, even if Galvatron is technically him. I noticed several returning characters from G1, such as Hound, and that one Autobot that could fly and drive. So, I wondered, which was your favorite? Mine was definitely Hound because there were three scenes where he's just blowing through his weapons. And grenades. And Gatling guns. And smgs

I'm going to take this as sarcasm