Another character in my story expansion, and she is part of the new toa team.

Originally a Ga-Matoran, Tundi (pronounced TOON-dee) was an odd character. She was always obsessed with the weather and the mystery behind it. Where does it come from? How does it work? What controls it? She longed to know more, but there was little in the records for her to study. Instead, Tundi resorted to personal, albeit dangerous observation. She climbed on top of the mountains and crystals of Ko-Metru to study it’s blizzards, and rowed out to sea to study thunderstorms. There were quite a few occasions where she had to be saved by the local Toa, but that didn’t stop her from learning about her passion. And now with her new element of Lightning, she has even more reason and ability to learn more. The difference is now she is the one in control.

As you might imagine, Tundi is pretty eccentric, interesting to those who want to listen, and annoying to those too impatient. Her plans are strange, but often work as a last resort. She is also quick to react, as that was necessary in her dangerous studies as a matoran.

She carries a chain harpoon and a protosteel shield, the latter crafted by their Toa of Iron. She uses her harpoon to entangle her opponents, and also uses it to climb to higher ground for easier use of her element. She can also use her harpoon as a lightning rod to attract energy from stormy skies, and can use it to direct that energy to her opposition. In the event that she is up against her own element, she can use her shield to absorb their attacks. 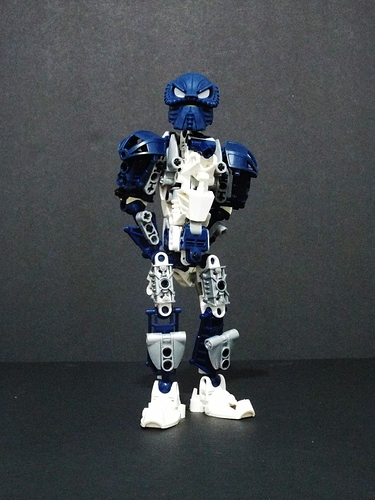 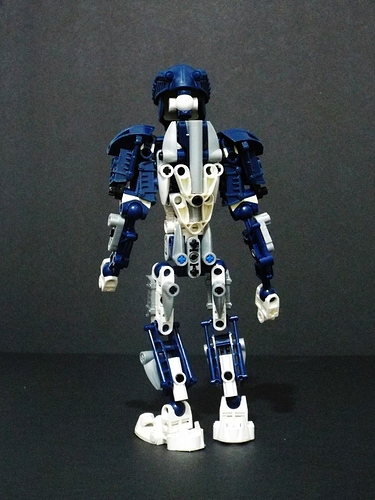 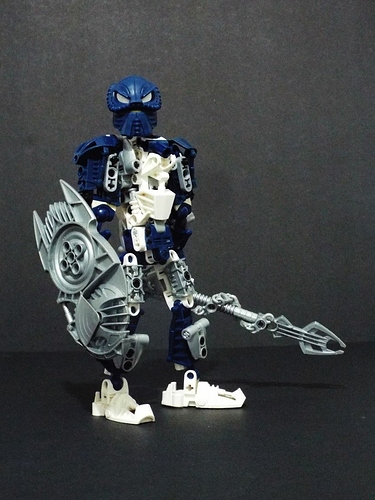 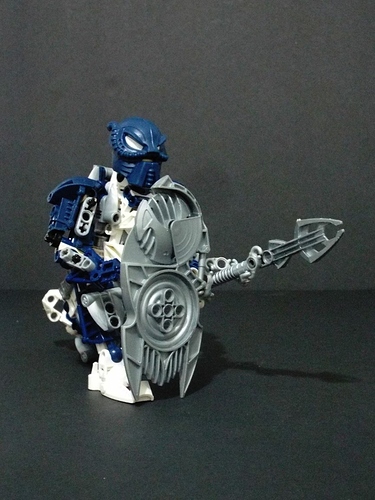 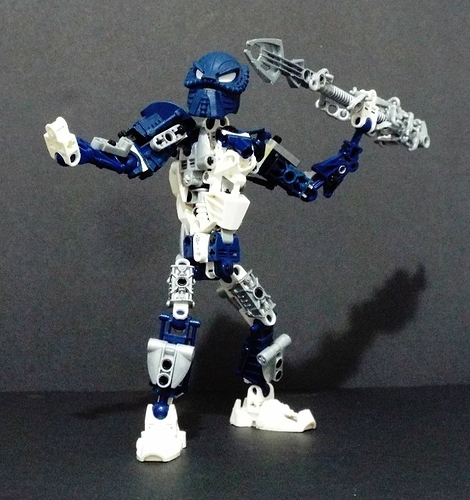 As usual, let me know about any opinions or suggestions you may have.

You should name her relámpago (which is Spanish for Lightning 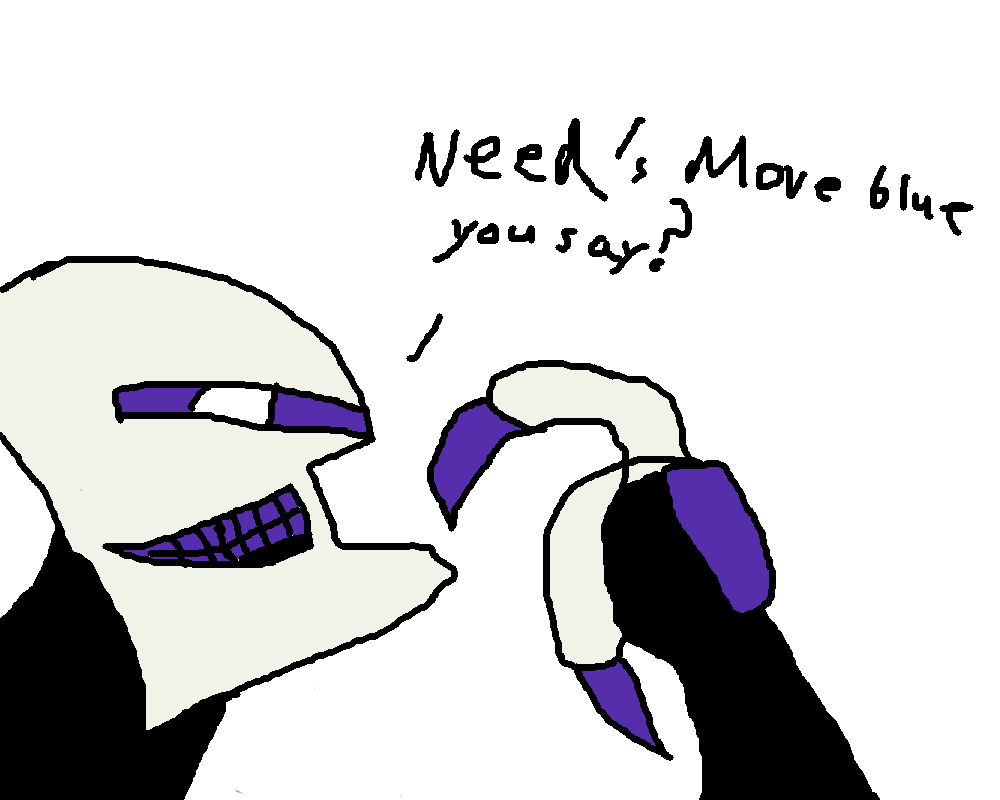 You. *points. Youuu. Why are you everywhere I am? Are you trying to become a master? If so than eyyy me too! How’s it goin?

You. *points. Youuu. Why are you everywhere I am? Are you trying to become a master? If so than eyyy me too! How’s it goin?

Yes I am trying to become a master. so far it’s going alright.

Its goin ok, but man this is off topic.

Nice moc! Still needs more blue. There. Cant wait for the full story to come out. Btw you have a bo toa already?

I’d be beating a dead horse by saying that it needs more blue, though apart from that this MOC is well done.

Seeing as the blue part was already covered, my primary suggestions:

This and the Sonics toa are the only two I have so far. I plan to make one for Plantlife, but I haven’t gotten to it yet.

As for the story, I’m honestly not sure what I want to do with it. It might just be a setting that these particular Toa are in, or it might be something I spend time to make. Either way, it’s going to be quite a while, as I am still trying to learn the ins and outs of the original story and figure out what to add to it.

In particular, I still need to figure out which elements I want the Toa to have. I kinda want to have the new elements make some sense compared to the elements they had before. Vo- and De- are pretty much set in stone, but their original elements are not, and none of the others are either.

It’s like, I want the Ko-matoran to turn into a new element with white in it. The only two options there are Lightning and Plasma. Plasma fits in better than Lightning, unless I want to shoehorn in a trans-ish character that would be pretty confusing to “write” for without being super stereotypical, but then Plasma is practically the opposite of Ice. And then I have Gravity, which would make sense for an Onu-Matoran, but that is already taken by Sonics. I kinda want to figure out if I could make an agori or something one the toa to fix stuff, but then that might not make any sense. Just stuff I gotta figure out via research and brainpower.

Nope, can’t shoot them. Just a fancy way to use that slot, and one that makes a spot for her to hold the shield. The technic cross thing on the top isn’t being used at all. I was originally going to use the Gahlok shield as a buckler, but then I saw the Norik shield and felt it matched the weapons pretty well.

I might try making her a bit more feminine, but I don’t see anything wrong with the mask. I saw the tentacle things on the back as sort of hair, and I guess the thing in the front with the studs could be a mouth cover or something. I was skeptical at first, but then I figured that it only looked masculine because I associate it with a male Matoro. IDK. ¯_(ツ)_/¯

I guess the Hahli mask might help with the blue too, but then I like the look of this mask a bit better. The hoses in the nose make it look a bit aquatic. Other than that, I don’t have any other metru blue masks, so then decisions and bricklink. I need to do bricklink stuff anyway, but I honestly think this is good enough to avoid the trouble.

And then for all of the apparent smurf enthusiasts, I’ll look into adding more blue. I think the changes I did with the lower torso help it a bit (blue connector in the front instead of the white one), but I’ll add some more. What do you guys think about adding some of the blue/white Hahli Inika armor to this?

it was a (terrible) joke because rohtukas whould usually be there

Oh, and I forgot to mention a name I came up with trying to sleep. #bedthoughts

Does that sound good enough?

I like this. The Kanohi works very well for this kind of MoC. As others said, need more blue.

For the name: how about Tonitrui (Latin for thunder),or Fulgur (Latin for lightning)?

Not sure if I would want to go full latin on the name. Seems like more of a Glatorian/Agori thing.

Is the anyway to make a poll on these forums?