Hey, everyone! Here is another MOC. This is Unit-7 "Avalon." She is the fifth in my current lineup of villains. Anyways, on to the MOC! 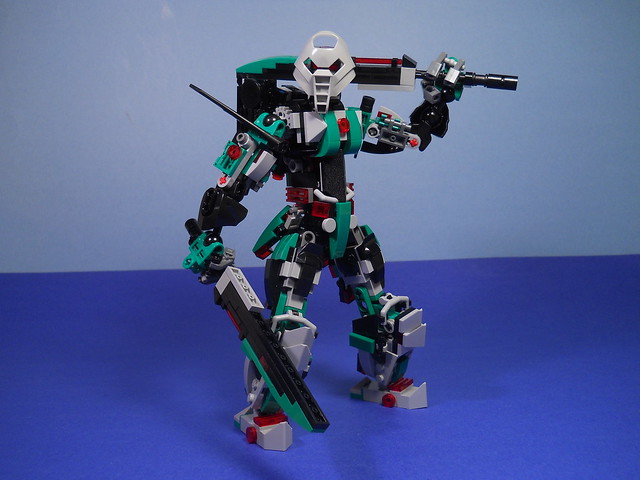 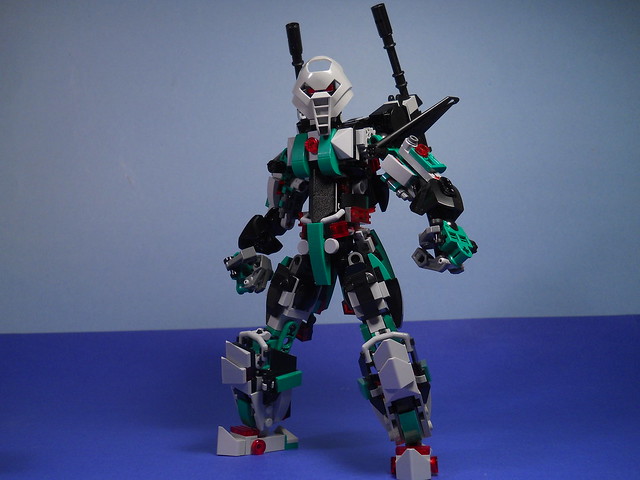 So, this is obivously a system heavy build, and I did that for a few reasons. First of all, I wanted her to have a more detailed aesthetic than some of my other builds, and I wanted to try my hand at mecha inspired builds. And here we have Avalon. 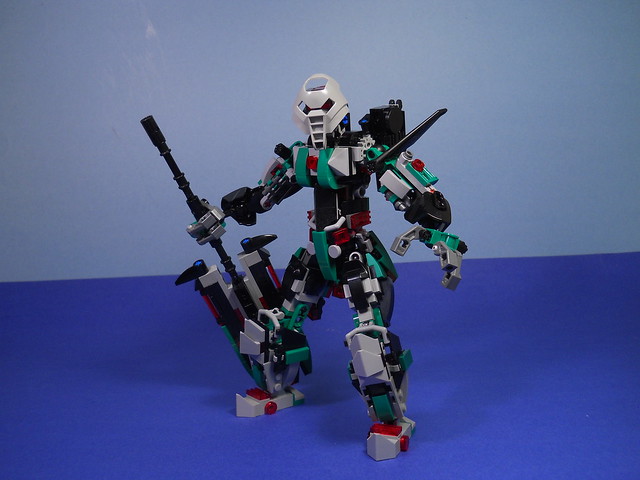 For those interested, here is her backstory:
A product of the pride of the Predecessors, Project: Avalon is the first successful attempt at creating a synthetic life form. Unit-7 was built by the Predecessors to wield the Distortion Engine, a device that can bend the fabric of reality. Avalon, as she prefers to be called, was programmed to serve Diaa in the Predecessor-Conduit war on Okoto. Following Diaa's fall, Avalon was temporarily deactivated, but Diaa reactivated her once he returned to Okoto. 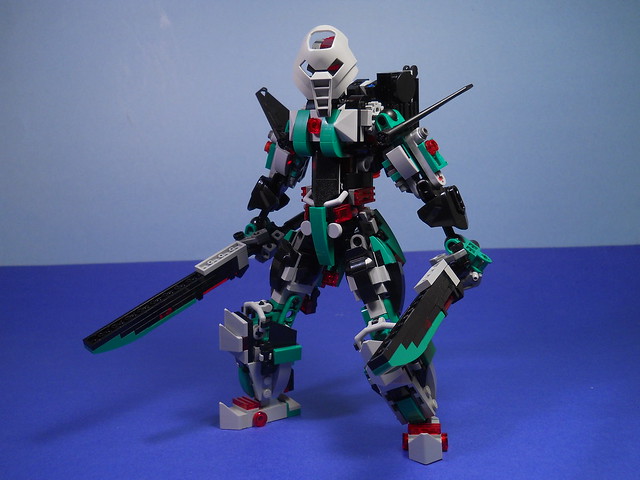 Personality:
Although she was programmed to be a killing machine, Avalon possesses a pure soul. Even after years of being used as a living weapon, she is naive and innocent at heart. She is not particularly evil; she has merely been misguided by Diaa. She has even showed the capacity to care for eithers, as exemplified by her friendship with Ryylem. 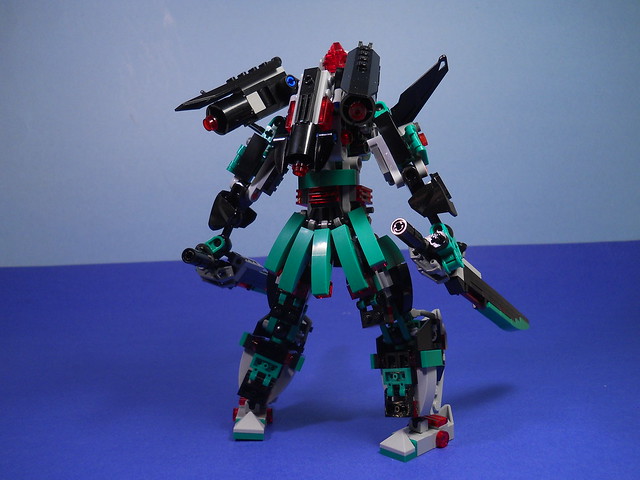 Abilities: Avalon is an incredibly capable fighter. Her synthetic body is quite strong, and her programming gives her a proprensity for tactics and strategy. Her levitation gear grants her great mobility and agility on the ground and in the air. The Caliburn blades are versatile weapons that can be mounted on her shoulders as guns, or can be used as katanas. Her most useful tool is her Distortion Engine which she carries on her back. She can use this device to bend reality around her, allowing her to deflect attacks. She can also use her engine offensively by combining it with her Caliburn blades to form Excalibur, the Distortion Blade. 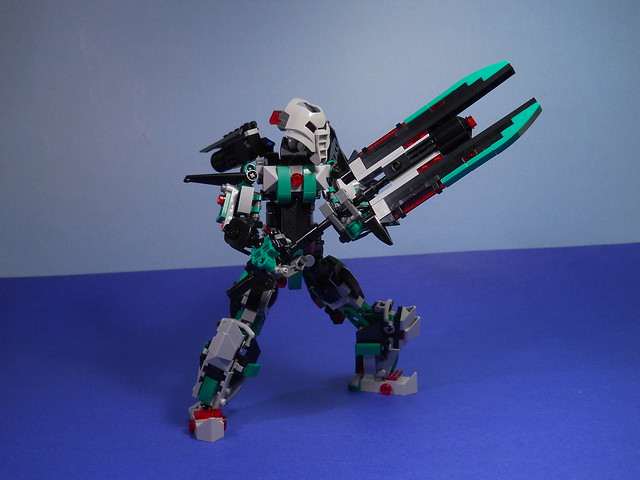 So, that is Avalon. I am quite pleased with how she turned out. I had originally planned to make a custom head, but I could not get anything to work.
As far as inspiration goes: I drew information from a number of sources.
First of all, this lovely creation by @War_of_the_Worlds provided the inspiration for the blades being stored on the back: http://board.ttvpodcast.com/t/vki-mk10/17470
I was also inspired by some of @MrBoltTron 's builds on flickr. Unit-7 and her weapon's names are references to the Lady of the Lake from Arthurian legend. I will let you guys figure out the rest of the sources... 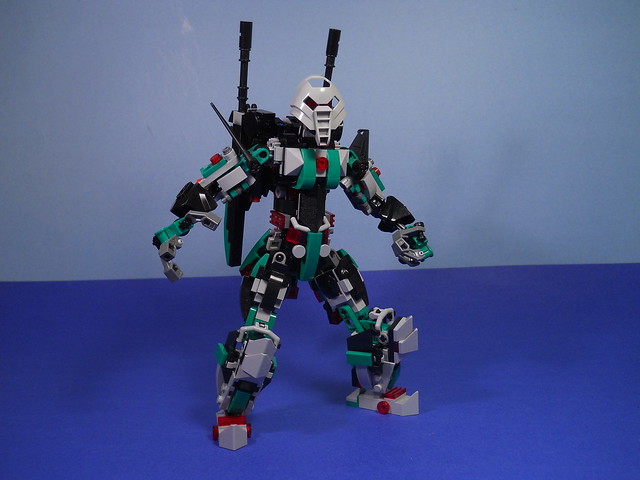 As always, any suggestions or comments are appreciated! If you would like to see more photos, check out the full album here: https://flic.kr/s/aHskwnMX91
That is all! Thanks!

I really like the colorscheme. It flows so well and gives her the right amount of evil flare.

this lovely creation by @War_of_the_Worlds

Dhoo-hoo-hoo, you make me blush!

The katanas are a bit to thick but that's usually the case withe brick built swords.
Apart from that this is amazing

these colors are just fantastic

As others have said the colors are great, but also in general something about this MOC just really appeals to me.

The MOC looks great with its use of system and constraction, but it's the colour scheme and its distribution makes it even more awesome!

wow, this is epic

I can't even anymore

Very, very nice! Everything about this is just so well done. Keep it up!

one stud thick is still one stud too much.

Otherwise, the whole build manages to look complex without overdoing it.

The Moc is amazing: I like the weapon combining function and the overall "mecha" look of it. The color scheme looks very cool with those trans dark red accents.

The feet are a bit meh, but a non-brick looking system foot is pretty difficult to make.
I would like to see some small shoulder pads, but that's just a minor nitpick.

Wow, this is pure mastery of blending system with Bionicle! My only complaint is that it doesn't look particularly villainous.

Project: Avalon is the first successful attempt at creating a synthetic life form.

Hmmmm. Let's see. Avalon is the his successful attempt of creating synthetic life form. Avalon is also a female.

I take it @MSEP took inspiration from Toa Helryx?

Such strange colors! Reminds me of the old 90's system sets.

The feet are a bit meh, but a non-brick looking system foot is pretty difficult to make.I would like to see some small shoulder pads, but that's just a minor nitpick.

I would have like to improve the feet, but there is not much I could do there, as you said.
I might give the shoulder pad idea a try. There is not much space, but it is worth a go.

one stud thick is still one stud too much.

Agreed, but I didn't want to use premade parts as they would break the aesthetic theme I had going.

I take it @MSEP took inspiration from Toa Helryx?

Actually, no. Though the similarities are there. The original source of inspiration was BlazBlue's Lambda. That was the baseline inspiration for the fact that she was a synthetic being in a series of such beings. There are some aesthetic similarities, too, but that is about it besides that. The original concept art I drew of Avalon was much more similar to Lambda than this final version, but I deviated from that to make Avalon more unique.

I got to say it looks great.
Though the katanas' hilt looks a little bit long.

Nice moc, glad to see a mixture of system and technic. although i was expecting a true mecha, the motifs are there, and they look great. The swords are too thick, and i would advise trying to use technic axles, although that would be tough.