Venivvy was one of my entries to the Battle for the Golden Mask contest and currently holds the title for being my most liked creation over on Lego.com. But there isn’t much constructive criticism over there, so I thought I post it here to see what all of you think. And I’m also too lazy to fix any errors in the original description, so most likely typos galore. 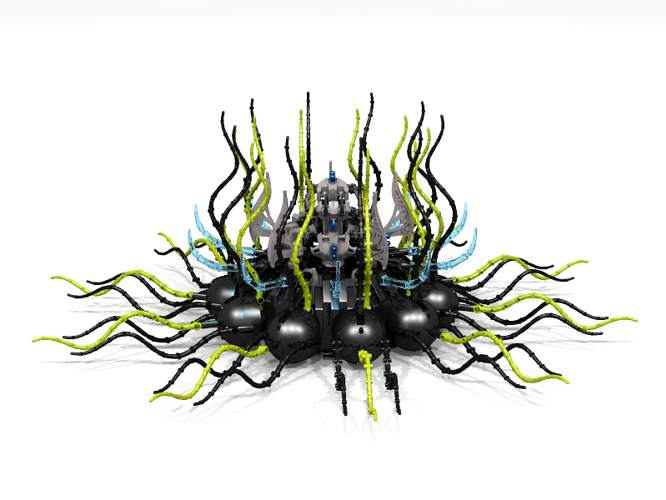 "In the time before time–on the mystical island of Okoto–the Mask Makers had yet to start to learn their practice, the Protectors did not have elemental blasters of any kind, and the Jungle Protectors only used plant weapons and not that of air. One day, a mysterious evil grew in the jungle region of Okoto. The islanders called this evil Venivvy, which means “Mother/Queen of Burning Demons.” Its vines spread, destroying everything in their path. Where the vines could not yet reach, it released the Sparnturors (“Burning Demons”). The Jungle Protectors were losing, as everything they tried to defeat this menace was greeted by death. Hope was lost and the sinister vines of Venivvy began to take over…But then hope returned. The Protectors learned that, like all plants, Venivvy could be destroyed if they blasted it with powerful bursts of air in its roots. But how? No one could come even close to the main base of Venivvy without being crushed by her vines. But an automaton from the earth region of Okoto, having been attacked by a Sparnturtor while looking for better mining spots in the mountain region separating the island areas, came to help. With a mighty swing of his axe, the automaton bested Venivvy and up-rooted the monster; giving the Jungle Protectors even time to blast the king root with poisonous gas, destroying it for good. However, the queen wasn’t finished just yet. It created a seed drone, but had no time to finish programming it. So with a mighty blast, it released the seed. The robot was also near the place where the seed was launched and both were sent flying into the air. The Protectors didn’t see the seed and only saw their savior defeated in the end. But the Protectors salvaged what they could from Venivvy and the Sparnturors to help rebuild. They reversed engineered the blasters on the Sparnturors and improved them. Soon these blasters where giving to all the regions of Okoto. But, as all things are in time, Venivvy and the robot where forgotten. As the incident only took place in the jungle region, few knew about the war there and few, if any, that are still around from those days during Venivvy’s reign. But alas, history repeats and one day the offspring will destroy Okoto…

Venivvy is a biomechanical plant, so it’s metal on the outside, but very much like a plant on the inside. Her vines can crush anything known on Okoto and can mass produce her spore drones, the Sparnturtors. Outside of the vines, Venivvy can’t attack other than biting things with a Venus flytrap head. Which the head normally isn’t out and isn’t Venivvy’s actual head, since she doesn’t have a head. She was going to take over the island, converting the entire thing into a large factory producing an army of war machines. With the Sparnturtors only being her scouts. But why, where did she come from, and who made her? Who knows, we’ll just have to wait and find out."

“The Sparnturtors were the children of Venivvy or, as their name means to the Protectors, “Burning Demons.” So named after their three, single acid blasters. The acid could easily melt any known thing on Okoto and along with their own vines, these spore drones were a frightful thing to fight. They normally hovered five to six feet above the ground, but were known to fly great heights, even to the tallest mountain tops. But, being scouts, they are lightly armed and armored. A good blast of fire or poisonous gas in between the gaps in their armor could take them down. Though they had a hive mind, meaning every single Sparnturtor learned what other Sparnturtors learned or saw. Thus they became harder and harder to fight as time goes one since they react quicker. But once Venivvy was destroyed, it severed their connection and they deactivated. Thanks to their acid blasters, the Protectors were able to reverse engineer and improve them, making the elemental Gatling guns.”

…So, yay, pretty dated story wise and needs some fixing. I’m not sure if I can post LDD files here, so here are links to were I originally posted them if you want a closer look.

That thing is awesome looking! I really like the idea.

The Venivvy is giving me some major Morbuzahk vibes. Pretty stellar design overall!

looks really cool, I’m getting a bit of a Warcraft “old gods” vibe from this 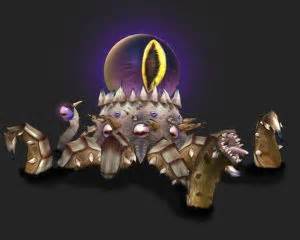 Gadzooks it’s the Morbuzahk all over again.

Dang. I want more of these.

@Stoax Thanks. And yes, Morbuzahk was one of main inspirations for this creation.

@TheRed1s Thanks. I’ve never played Warcraft, but this does have a similar look to it.

@Zero Well, I hope someone can put your mind back together!

@Leoxandar Pretty much. If the Morbuzahk was also a factory that is.

@Hutere_the_Toa_of_Air More? Um, well, I’m only a decent MOCist at best and Venivvy here is an exception, not the norm of my builds. But thanks anyways!