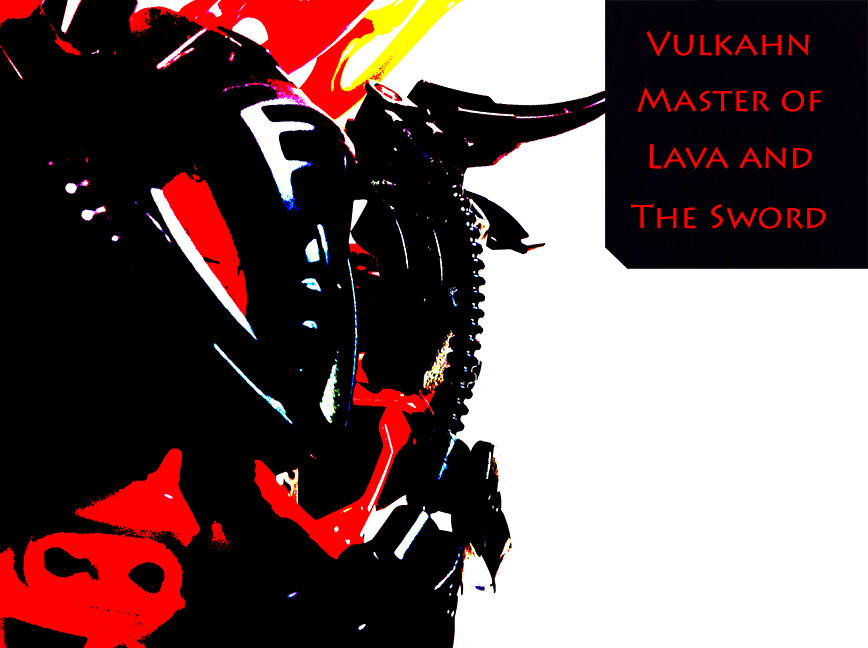 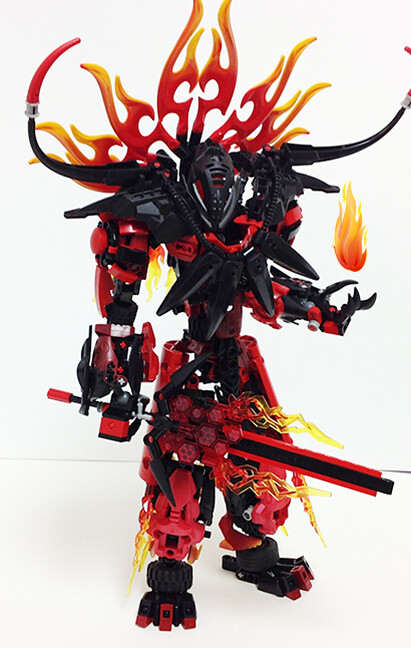 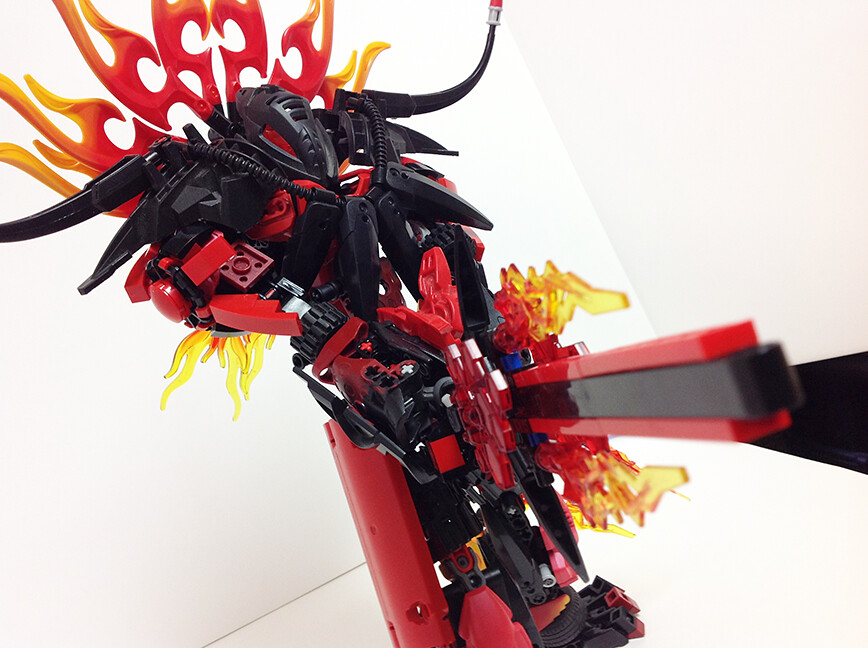 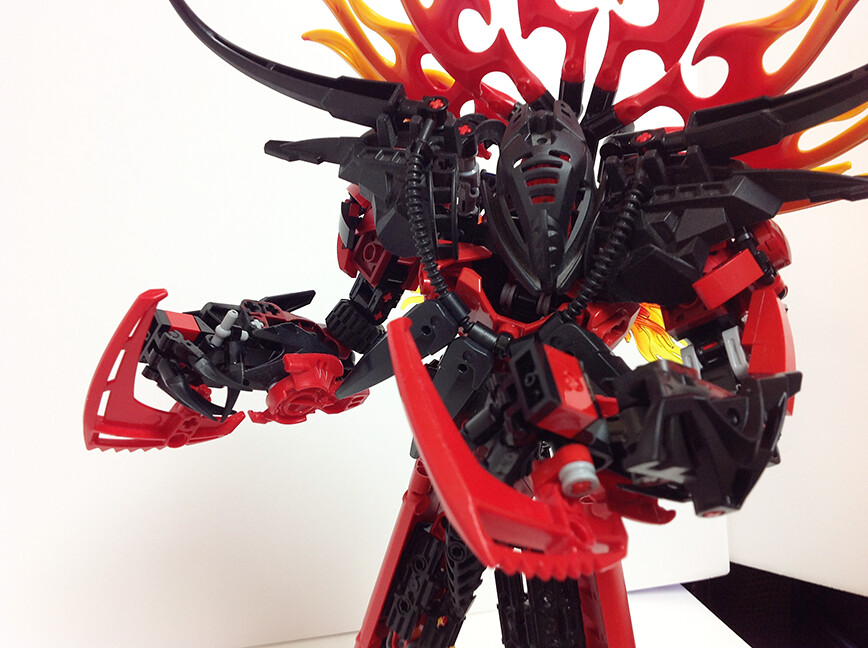 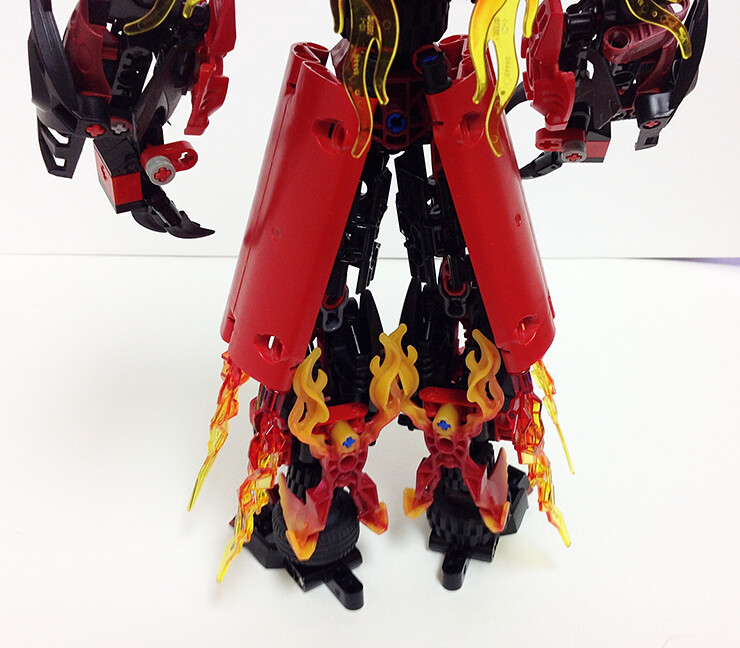 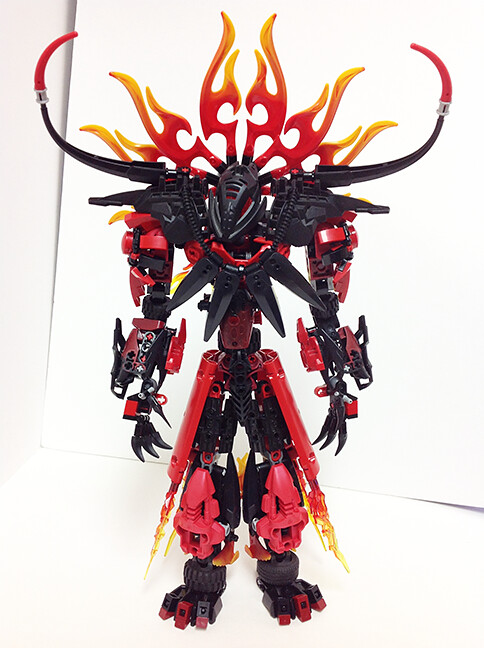 And then, he exploded due to too much power… 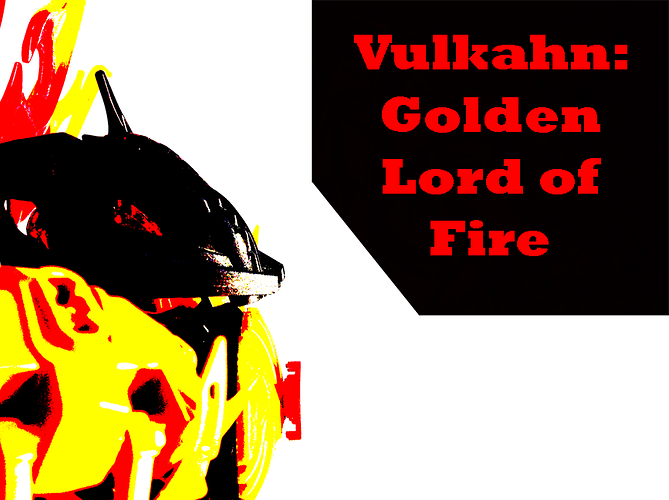 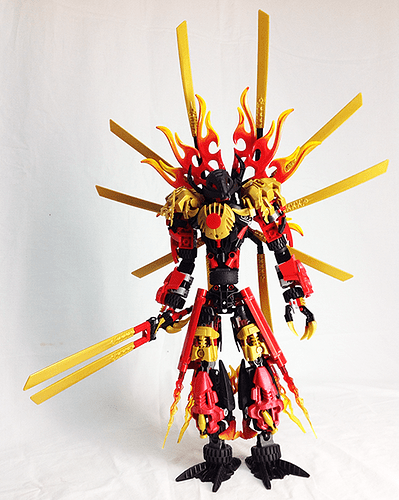 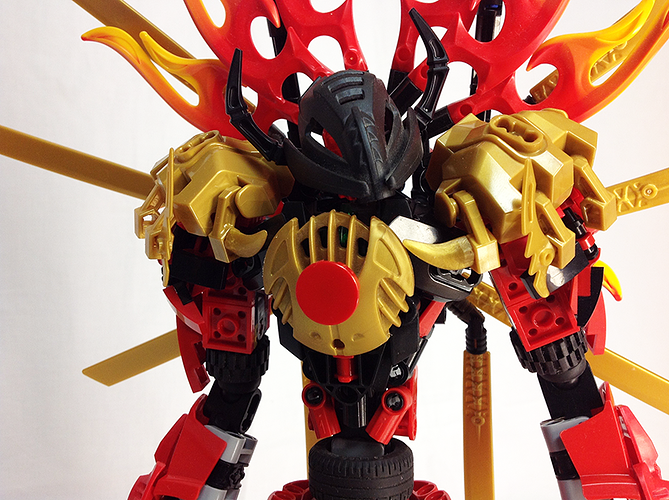 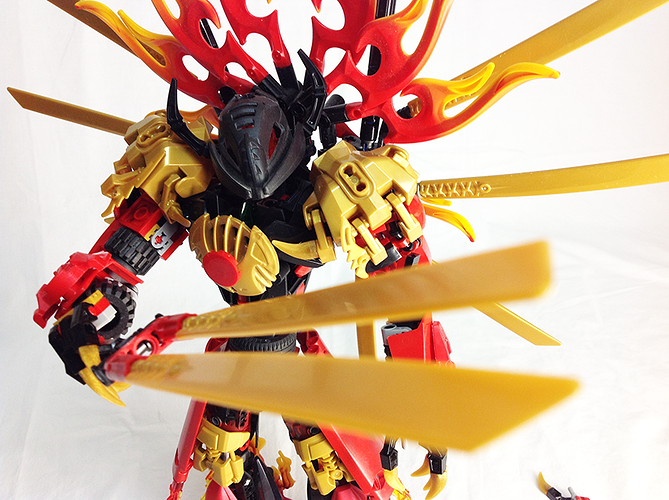 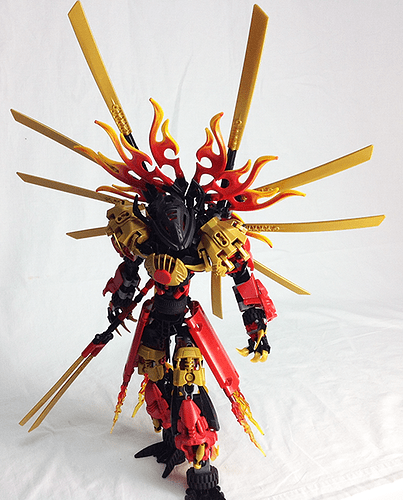 He will be updated as time goes on, he has been in existence for a good 5-6 months now, the longest i have ever had one MOC around, other than my self-moc.

How long did it take you to build this?

This is… perfect. I really cant critic this at all. Although, in the second picture, is the flame above his hand held by a clear piece, or is it photoshopped?
This is MOC spotlight material right hear!

That golden form is 100% boss. That sword ring is glorious.

My favorite form is definitely the golden one; my only quip is I don’t like either of the swords.

The first one looks a bit jumbled, and the second one looks too thin and slightly bent (a major downfall of those blades; I don’t think any of the ones I own are even straight).

Anyways, great work! Keep it up!

Awesome. These are undoubtedly the best things I’ve seen all week, but there are a few things bugging me.

for VMoLats (acronyms r kool) the lower arms feel a bit gappy/chaotic. Other than that, the only thing I can nitpick at is the light grey piece on the left upper arm
for VGLoF the whole MOC feels a little tall in proportion to the width, although that may just be the leg length.

Excellent MOC–better than anything I could ever do, for sure! I love the flaming effect you accomplished with the Chima pieces on the first form. It reinforces my desire to get ahold of a few of those pieces. The sword is also great–excellent use of the red energy shield bits. The armor is also expertly layered.

The golden form is awesome as well! I love how you took all the aspects of the first form up a notch without losing any of the uniqueness!

Overall, the fact that you were able to build something this awesome in one day is mind-blowing! Really great job, and I hope to see much more from you in the future!

I really like it although is there a story for why he went from gold to black or vice versa. Did he turn evil or something

Okay here we go.
Master of Lava and The Sword
The coloring scheme works really well.
the fire pieces on the back just look wonderful.
I like the necklace thing he has. It gives him a tribal feel, in my opinion.
His sword is interesting.
I really like his feet for some reason.
he appears to have no neck though.
Golden Lord of Fire
The fire and sword pieces on his back just look as groovy as heck.
The arms at first look really simple to me, but then I took a closer look and saw they were not your standard arm build.
Ever since Bionicle G2, I have found that gold works very well with fire characters. I like his color scheme.
I really like the shoulder pad things as well.
The legs look a bit cleaner looking, but that might just be me going insane.
he still appears to have no neck though.

For those wanting a story:

I made six elemental ancients that are named lords and ladies. They are the most ancient elementals, the first toa if you will. They all went away and were covered by history. Until they were awoken, individually. Also, they are nearly five times the height of a normal toa.

Motto: “Out of the frying pan, and into the Fire!”

Vulkahn erupted from a volcano in an unknown planet he knew not where in the universe. At the time, he hadn’t realized what was wrong with him and it took some time to realize that he is made up of lava and floating plates of volcanic rock and obsidian. Unfortunately, when he had erupted, he tried to find help amongst the village laying at the base of his volcano. Unfortunaely for these villagers, he burned and melted them and the island he was on just after a few strides. So now he has cooled himself down enough to be around others and has traveled through space and time via a cosmic anomaly to a planet populated by species very similar to him in appearance.

As for the golden version. The original was made a very long time ago, nearly a year. All of the other lords of the elements have since been disassembled, but i could not take this guy apart. Then I thought, how can i make him better? GOLD! Now he has upgraded armor.

Really cool, the golden version in particular sticks out to me a lot. I love how you used those golden swords and Chima flame pieces for both respective models, they just really add to him and give him a really powerful aura.

I am left speechless.

I really liked the MOC, but then that golden version…

I love this so much. It looks amazing

Never have I seen greater use of the Krakhaan. I love the flame cape.

Wondering why this doesn’t have a mouth?
Because the jaw is on the floor right now.