This cyborg unit was originally a security bot, assigned to protect a construction site. But that site was one of the first ones hit when the bombs dropped.

The unit was very heavily damaged. But due to its self-repair protocols it pieced itself back together using parts and tech salvaged from the destroyed construction site. It became sort of a Frankenstein’s monster, with parts of all different types of heavy machinery melding together into one powerful body. Hence the tag of being a “mutant”. It turns out that after this mutation, it is far more dangerous than its original form.

Without a site or any workers to protect, it’s operating aimlessly. It’s not a fully sentient organism as it relied very heavily on a prime directive (site security) in order to operate. Those directives are now void, so left to it’s own devices it’s become an unpredictable and violent to anything it deems a threat (even when something clearly isn’t a threat). Now it’s just wandering the wastelands, and shredding whatever living things that cross its path, especially humans. It’s legend as a harbinger of death has spread across most of the human settlements, and it’s basically the most feared thing in their lives. The name Warmask was given to it by those who told the first tales of it’s unspeakable horrors. 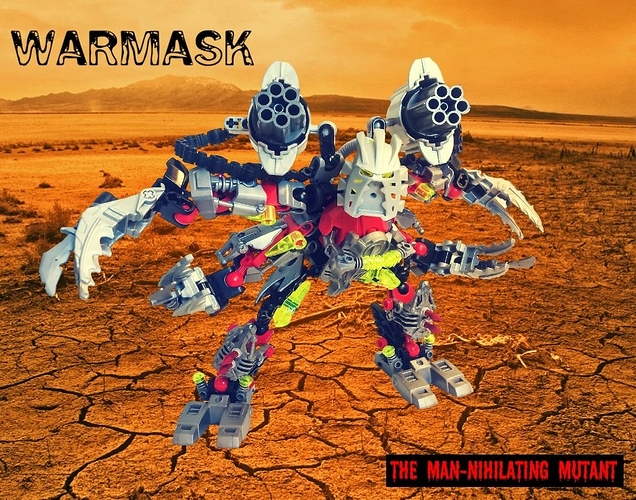 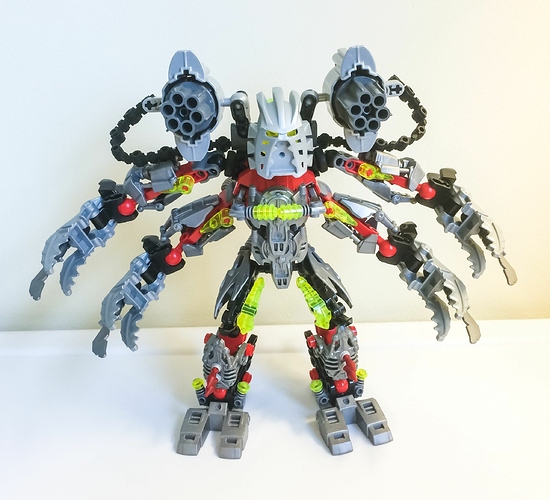 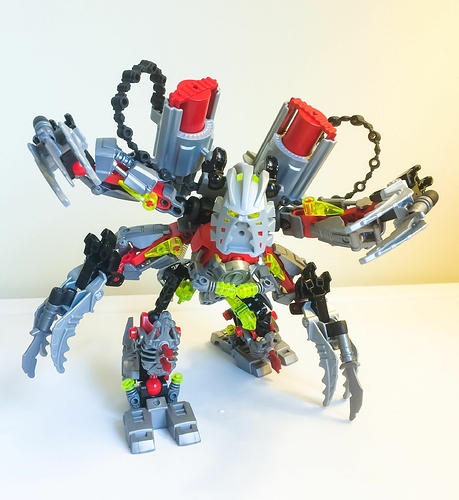 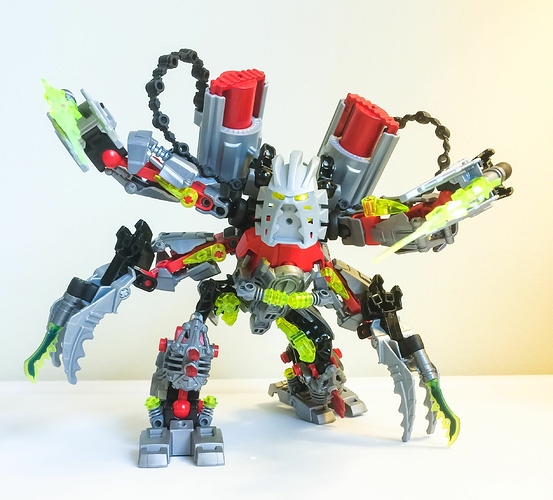 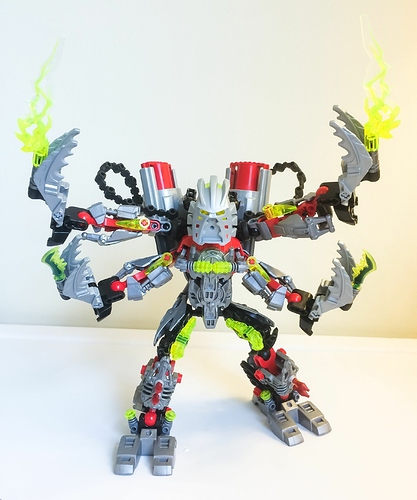 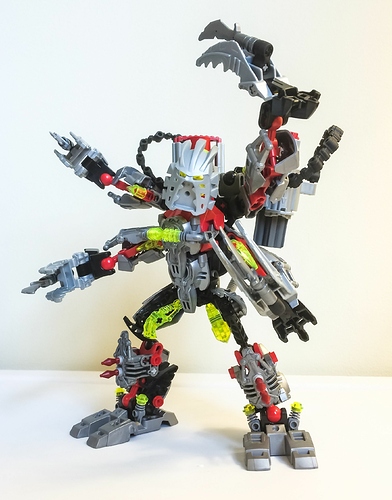 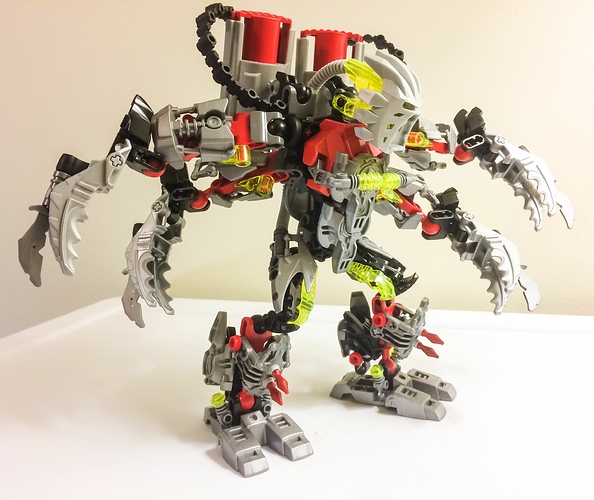 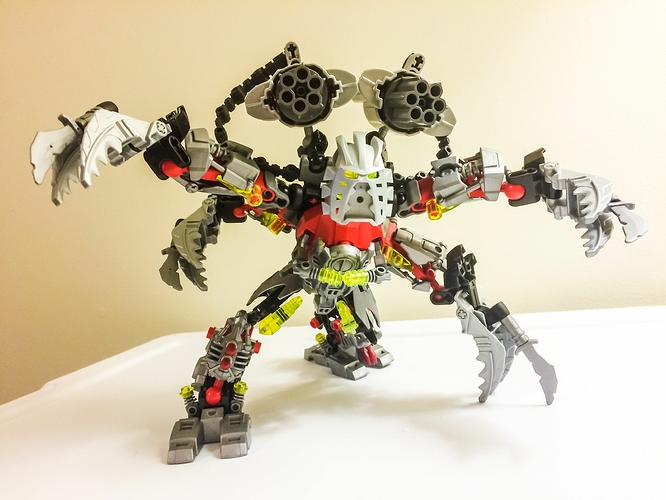 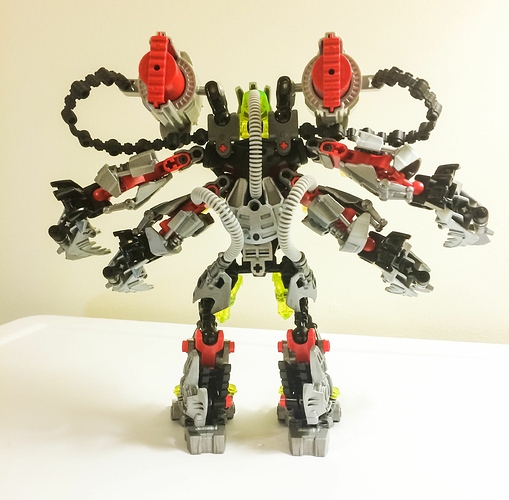 Beautifully ugly!
Except for the Avohkii, but I can stand to excuse that.

Thanks. This guy is my entry in the current Reddit MOC contest. The theme is “post apocalyptic”.

Such a beautiful color scheme…

This guy is a sweet four armed monstrosity, I love it.

There’s a lot going on, but the colors are well balanced and it has a menacing outline.

It’s. Well it’s something. Not sure what to look at here.

Hmmm, it seems like many aren’t liking this guy as much because he’s “got a lot going on”. I guess that means he has too much detail? He does have a lot of features, but he’s actually 100% symmetrical from limb-to-limb. So is he really that hard to understand, visually.

The other funny thing about this is that when I posted a much simpler design last week, many of the comments were saying that it was too simple. smh

Nice reference! I was absolutely influenced by that guy. I know it’s probably sacrilegious around here, but I was way more into HF before Bionicle. And XT4 was one of the first sets I bought (eBay) when I started collecting last year. I’ve always wanted to make an uber version of that guy, so I guess you could say this is it.

I’d say the only thing that looks too busy on this guy is the cordak blasters.

They are pretty OTT, aren’t they? I went with them because I wanted him to look almost cartoonishly violent. You know with the rocket launchers on his legs and everything. I was imagining this scene from The Mask: 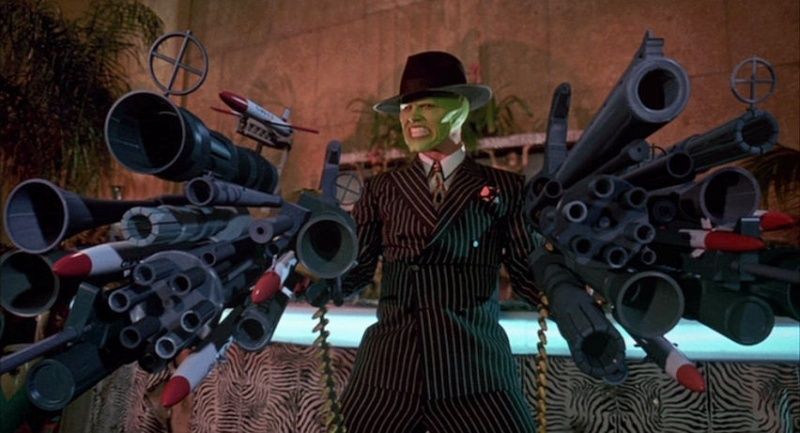 Ah, gotcha. Nah I think the rest looks fine except for the upper legs, they look kinda skinny.

That background picture threw me off, but upon seeing the moc against a white background, it’s actually looking pretty good right now. The color scheme is weird, but I love the build! Good job!

Great moc, I love the color scheme and overall style, the Avohkii looks weird. The symmetry doesn’t fit the backstory, but other than that, great moc!

They are pretty OTT, aren’t they?

Well, yes, they’re literally over the top of him.

The color scheme is weird

Weird, but good. It looks corrupted, which works with the backstooy.