Weapons With A Unique & Creative Twist!

Continuing the discussion from Help with weapons?:

That topic inspired me to ask you guys something. Now weapons are cool on a Bionicle, a simple blade usually gets the job done, but honestly for me, lately I’ve been looking into multiple uses for weapons inspired from either the Nuva series or RWBY. So is there any weapons you have, or want to make with a unique purpose? Have any ideas for anyone else? Share your thoughts.

(P.S. if this is too much like the ‘Help with weapons’ topic, let me know, I’ll remove this one. But I figured this would be something a little different, as it results to not weapons in general, but weapons with a twist. And no, I’m not trying to hog attention.)

With weapons, I usually put a little twist to things as taking inspiration from RWBY. For example, two claws are on ball joints on the arm of my Self MOC Vortrakk, but that’s not all, he has knife on his back for storage, and a pistol that forms the abdomen section. Also, the knife can combine with the pistol or form a large hand with the two claws. Ahkahna on the other hand, a gun is found on her back the deploys a bit of armor plating, and parts of her skirt for a shield and dagger.

I also have ideas for Snipers turning into Staffs, Shields formed from clothing, Double barrelled gun from the back into a hammer, and so on.

I built a backpack that doubled as a Cordak Launcher for my self-moc, but that’s all I can think of in creativeness. Oh! And a giant staff for one of my bigger MOCs Grimlock, which is a staff with a saw at the non bladed part. 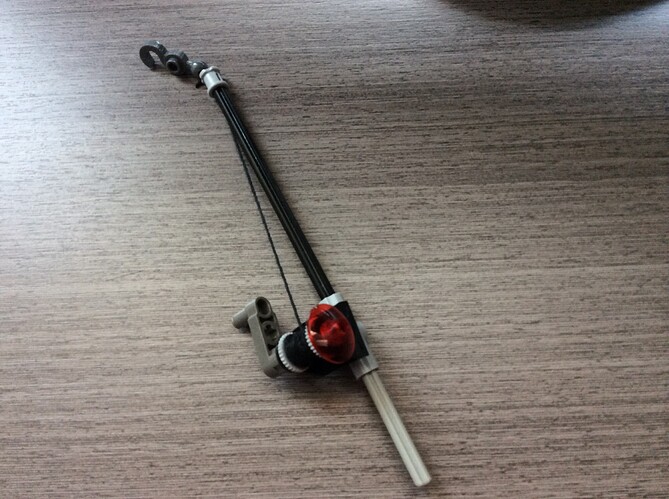 I’ll have to take a picture of Toa Orotam’s hammer. It’s pretty unique.

I thought I made a bow and Arrow once, but one of the members on the help with weapons topic pointed out the difference between a bow and a slingshot. So I have a ‘slingshot-that-looks-like-a-bow’ and arrow.

I probably have a few creative weapons lying around, but generally, unless I’m shooting (pun not intended) for some weapon constraction hasn’t done, I just focus my creativity on the character themselves.

It’s not super complicated, but it makes for an interesting Toa tool.

I have this theoretical weapon called the “Stormfork”…

I’ve got the Volcano-Spoon. You’re going down

Reign of Iron, an epic battleaxe used by yours truly.

Seriously though… Chro has Rhindon, Sword of Ybrus, from Bionifight Ultimate. He used to have some golden weapons which were pretty important to his backstory, but that’s mostly forgotten by now. None of which are especially unconventional.

I mean, I could make scissors with the aero-slicers, but alas no. The sword’s blades are quite stationary.

Well, G2 Jethryn has this legendary lightning sword… that he almost immediately dismisses as being a cliche.

And now I can’t unsee your sword as Kamen Rider Gatack’s sword-scissors(can’t remember the name).

I dunno either, but yeah, sadly Nyran cannot perform Rider Cutting like our good friend KaGAAAAAAAAAAAmi.

but can “clock up” because of the kakama.

He’s completely right: that is cliché.

So’s Rhindon, though. But for that reason I tried to make it a little more interesting with a bit of backstory.

In Day Run, the RPG where it was introduced (which I did not participate in), Rhindon was one of several ancient relics, but really had no backstory outside of that as far as I am aware. Voltex’s character obtained it, and later he gifted it to me as a Drift Force Weapon for winning the final round of Bionifight Ultimate alongside Voxumo. Now it’s Chro’s primary weapon in Bionifight Ultimate: Drift Force.

My own idea of backstory for the weapon initially stemmed only from the name and powers, as I knew nothing else. “Rhindon, Sword of Ybrus, blade of light and shadow.” Although Ybrus was evidently its owner or creator, the name in the title gave the sword a sense of personality, so I’ve decided that Rhindon is at least partially sentient. Additionally, its dichotomy of light and dark lead me to design its MOC form with a visible duality of gold and silver to represent that.

Ironically, the silver blade used in Rhindon’s MOC form was slightly bent, so that it looked as though it was bending away from the gold edge. This frustrated me at first, but after a little while I decided that I liked it. The half-light-half-dark, plus the idea of a sentient weapon, lead me to come up with the idea of a weapon that’s actually made from two different, conjoined, sentient blades, which both utterly detest each other; the sword is literally tearing itself apart in its rage. This anger magnifies the sheer power of the sword, but also makes it risky to wield.

So, uh, yeah. That’s the story of how I made a sword with a bent Lego piece and built up background lore for it. 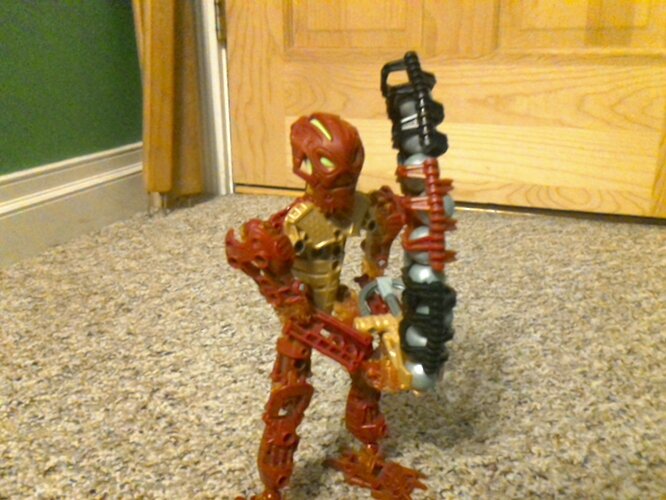