What about Sidorak's left hand?

Well, I haven’t posted “Ask Greg” catgory topics so tell me if I am doing something wrong. Also I would be grateful if anybody from the community solved this question, or informed me if it already was solved somewhere.

So, Greg once said that sets are canon appearances of characters (and not those from movies). But Sidorak’s set form do not actually have left hand. Like not just fist, but all elbow, for it is fully silver (like prothesis). Does it mean that Sidorak has only his right hand biomechaical and his herding blade is actually mechanical part of his left hand? And does it mean that he lost his left hand in a battle or is it special feature of Stelian’s spieces? I just was thinking about slightly revamping him and came up with that question.
Thak you!

Greg probably will have to answer this one. You got me curious and I looked into the written material for clues, but nothing definitive. The only hint I found is how he was a terrible aim with his herding blade, indicating that he does not use this arm much, which could be evidence that he did not have a hand-like appendage on that arm. Maybe there is more information hidden deeper in other materials, but I don’t know.
As to if his species as a whole has this, we can look to Voporak for that answer. While he has been mutated, he is still shown to have both sets of claws. I take this as it being likely for his species to have both claws. But again, he is mutated, so this isn’t anything that can be taken as fact.

You might be able to figure this out by looking at other characters who have visual inconsistencies. For example, in the movie Web of Shadows, Sidorak has a left hand. Teridax is another character who has a visual difference between his movie form, and his set form. In Teridax’s case it’s his mask, which looks different in the movie than in set form. (There may be a reason for that I don’t know though.) So if we figure out the canon appearance of Teridax’s mask, we can determine the state of Sidorak’s left hand.

Just gonna drop in here to remind everyone that Roodaka’s set also does not have “hands.” 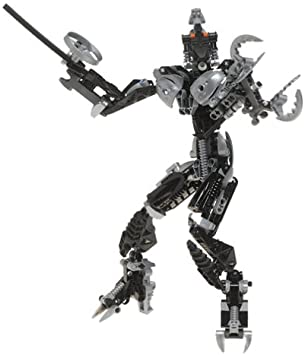 And, clearly, she does have hands in-story.

The sets are the closest visual representation we have of the characters in-canon, but they’re not the be-all end-all appearance. I think we can reasonably assume that Sidorak has a left hand, and that his blade is merely an arm-mounted weapon.

True. But at the same time her model has an open joint socket which could be representative of a hand, as well could be said with Keetongu. However Sidorak is lacking any such suggestive building in his left arm. So it is a little more confusing to say for sure as you could with these other two.

Maybe. But it seems a bit like splitting hairs to me. Hands have looked remarkably different throughout BIONICLE history, to the point where some sets, like the Toa Mata, have two unique hands. Same thing with later sets, like, say, Hewkii Mahri, where his Cordak Blaster is attached to his right arm with no hand piece, even though one technically could’ve been added there. Nonetheless, we assume that he has two hands.

Of course, Sidorak could be different, but I personally think that, even though the films are less canon, the most ideal appearance of various sets would be a meld between their actual appearance and their film appearance.

@Toa_Heatwave, I see your point about Roodaka and sets with some similar problems. But I agree with @Kanohi_Cantri about Roodaka, and if talking about Hewki he at least has elbow, while Sidorak seems to not have even it. Like In set his left arm moves only in shoulder point, it is just a single piece, so it concerns me that much. Also I personnaly think that it might be pretty cool concept with arm lost in some battle of the past for Sidorak. Maybe there some such issues in sets I haven’t noticed due to the fact that I do not own many.

Little off topic but to talk about Hewkii, I’ve always considered that his right arm piece is like a shell or extra armor shielding his arm underneath, where he is holding his cordak blaster. Not to judge or anything, but it bothers me a little when people dock his design down because of that. With that said, there’s also this panel from the comics that I would point out in example here.

Greg used to say that he had nothing to do with it, because it was designed by the set designers not him.

@Surel-nuva, that sounds right, but I think I can’t contact Sidorak’s designer, can I

? So this topic is all I could have done. Like it is pretty important information. I just hope Greg (or somebody who knows something about it) can somehow comment it somehow.

In universe he has 2 arms, but the set’s main function was the extendable blade, so they put more effort to the function than the details. Neither has Keetongu or Roodaka hands in the sets, but both were described having hands in the story. Roodaka was shown to have a staff in the movie, while actually the catcher claws are the parts of her hand.

Given that set designers have to comply with an arbitrary limit of cost, complexity, and pieces currently in production, I would always see the sets/models like anything else: an interpretation. Personally I fully intend to give Sidorak and Roodaka proper arms with either staffs or arm-mounted weapons, it is Lego after all!

It’s also worth noting that there are multiple canon references to features the models lack: heartlights, organic components, proper articulation…