Hi, friends! Thank you seeing this!
I have a question, please tell me about this!
I and my friends of japanese-BIO-fans have been researching this word for years, but we couldn’t get more information.

“They were then sent to Karda Nui, where they defended the Av-Matoran at work there. While there, they had to contain energy spikes which were affecting the Rahi, and they had to defeat the sentient lightning bolts known as the Avohkah.”
── by BS01 at the Toa Mata’s page

What is “Energy spike”?
Is it a Character? a phenomenon? or something else?

I’m guessing it’s referring to increasing energy levels rather than an entity. I assume the Avohkah were involved since I don’t see these “energy spikes” being mentioned later on.

I think it’s referring moreso to a spike on a graph (In other words, a sudden increase of energy) rather than a physical spike, but I could be wrong, I don’t know the lore for that era too well.

Pretty sure it’s what has been said by @1000Purse30 and @ToaOfPlastic, a surge of energy.

a surge of energy. 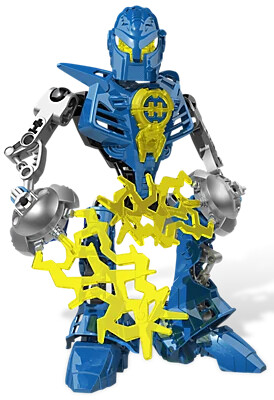 Aren’t those some sort of tool that helped to defeat Avohkah? Like, something that attracted/could hit lightning Rahi.

I think this might just be an error on BS01’s part? This is what Swamp of Secrets has to say about the Toa Mata being in Karda Nui:
“These were what the Matoran called ‘avohkah,’ and the reason the Toa were there. At first, the villagers who labored in Karda Nui thought the place was just prone to violent lightning storms. But after more than a dozen Matoran were killed by lightning strikes, the rumor started that the bolts of energy were actually hostile and intelligent beings. The Toa’s first few encounters with the avohkah seemed to verify this. The lightning bolts avoided obvious traps and seemed to go out of their way to do harm” (94).

No mention of “energy spikes” so far as I could find in the book, but the avohkah fit that description, both in terms of being energy and in causing harm. Could be that someone mistakenly thought that the byproducts of the Matoran’s labor (the energy spikes) and the avohkah were two separate phenomena. Or it could be that the concept of the energy spikes comes from the numerous Ask Greg answers, and it simply isn’t cited.

Aren’t those some sort of tool that helped to defeat Avohkah? Like, something that attracted/could hit lightning Rahi.

I don’t think so. It’s fairly vague on how they were specifically defeated, but far as I can tell, the avohkah were just largely defeated by trapping them in glass or Gali blasting them with water.