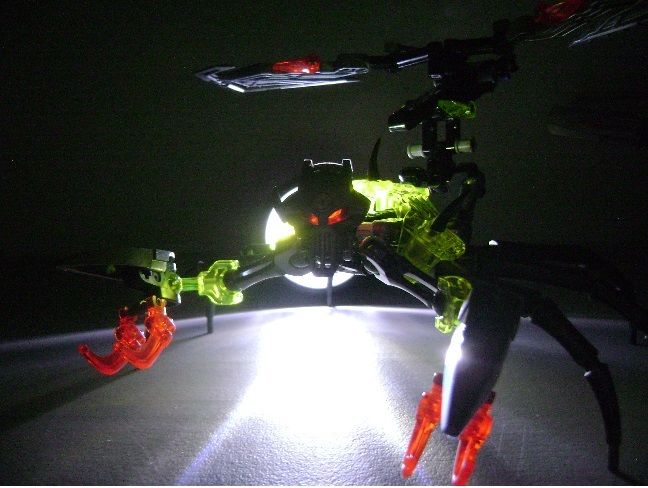 Set number 70794, I believe.
As I’ve been watching and reading many reviews of this set I’ve seen quite a bit of hate.
Sure the legs don’t move and the tail looks strange, but as for me, I quite like the set as a whole. Sure it’s got it’s bugs (pun intended) but on the whole I really enjoy this set for what it offers – I really enjoy the tail function, and I think the set looks pretty cool in the right light.

So tell me, What do you think of this set?
Whether you own it or not, what do you think?
Do you love, do you hate it, or are you somewhere in between?

The concept was cool and the function could have worked if the did one thing differently. Having the pincers closed automatically and when you press it opens.
I’m an in between guy, but leaning on the not impressed side.

I’m totally fine with Skull Scorpio, and I don’t know why. He just looks neat I guess.

That’s what makes it awesome

I don’t mind the lack of articulation in the legs, and I pretty much like everything about him, except his tail is a bit clunky, and personally I will customize him to be built how he is in the animations when I get him.

Each “flaw” that most people complain about has its reason.

This was done for stability. If the legs did have a swivel or something, the whole thing would wobble and/or compress the set down from activating the function.

The set itself already has seven CCBS joints. Adding any more would increase its weight and extend the price per parts count. Besides, the leg pieces that were used look fantastic to me. Very creepy, skeletal, and bug-like; something CCBS wouldn’t be able to pull off.

Scorpio would’ve been better off as a titan set then!

I don’t work for Lego, but i’m pretty sure that it was their fixed plan to have 4 regular sized sets and one large titan set. I don’t think that the designers would’ve wanted to reformulate that plan completely just to fill out Scorpio just a bit more.

I agree to an extent, but it’s not as ugly as it could’ve been. They made it so that it would be easier for kids to grip, having an extended trigger, and the function works phenomenally; good for play. If you look at other Technic functions, in other Technic sets, those are way gappier. Besides, it fits the skeletal look just fine IMO, and it’s unique.

it would’ve been better off without that stupid function!

It can’t have a gearbox. A crawling mechanism would’ve too parts consuming. A tail function had to be implemented. Every set has to have a function. 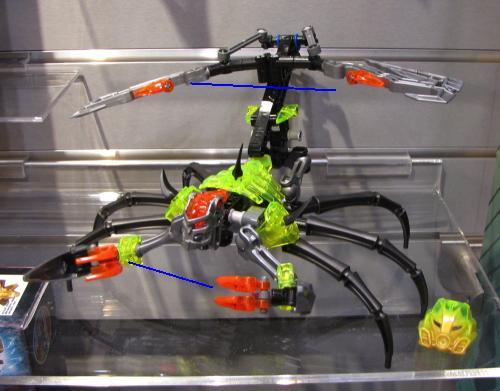 The neon green bits are packed closely together in the body, barely interacting with the red bits. Even so, the contrast looks nice. Imagine if it was completely neon green. it would look bland compared to the rest of the Skull villains

It’s those claws that really break it for me. I’m sure they wanted it to look alien-like, but they just look straight-up ugly and deformed. Even the animators thought they looked ugly and gave him new claws!

His pincers are extremely huge and i don’t like his mask.

I hate the awful tail. I may still get him though.

His pincers are huge

No they aren’t? They look well in proportion to the size he is.

I mean, he looks better than a Nui-Jaga…

You can say that again.

He looks better than a Nui-Jaga. There, I said it again. 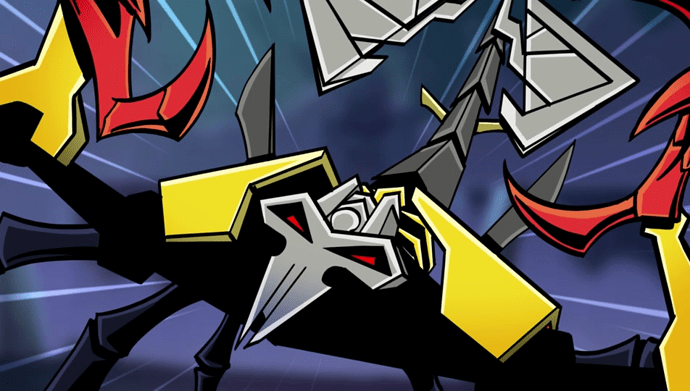 HE LOOKS SO AWESOME IN THE ANIMATIONS.

When I get him, I’m going to rebuild his tail like that.

He looks better than a Nui-Jaga. There, I said it again.

and yes, I will make that tail good.

No, that’d be considered spam.

and uh, I want to take his tail and claws…and all of him…and do a Revamp

Overall though he’s pretty schway and I love the set. I’ll be getting mine tomorrow so I will post again if I have anything else to share.

That’s cliche and not creative.

same mask as Basher in the exact same color. 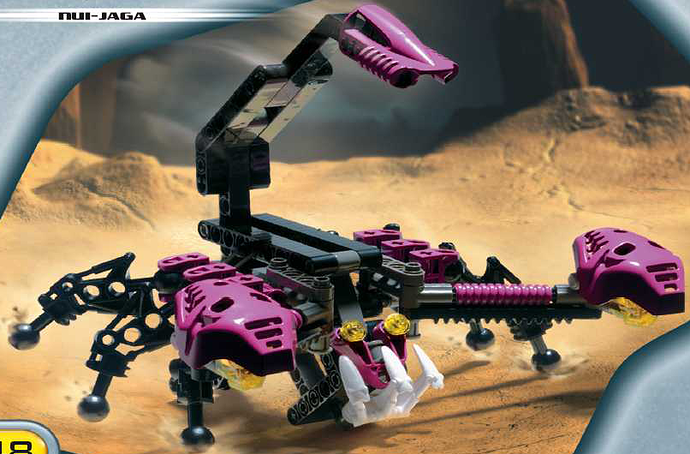 Ever since I saw the very first leaks I thought “that set looks by far the most unique”.

And while I still believe he is the most unique; he has since climbed down in my ranking of the skull villains in terms of quality.

I really wish that I could support lego in it’s creation of animal like Bionicle sets with unique functions, but Skull Scorpio just ain’t worth it.

I much prefer Nui Jaga’s look over Skull Scorpio’s.

I dislike how he uses the same mask as Basher in the exact same color.

Basher should’ve gotten the gunmetal and Scorpio the silver.

Of the Skull Villains, Skull Scorpio is definitely my second favorite, only behind Mask Maker vs Skull Grinder.

His overall appearance is fairly well executed IMO, giving off a corrupt and decaying look very well that makes him out to be quite menacing. The look of his ‘mask’ helps to enforce his menacing look even further with its savage eyes that, speaking of which, are also fairly buglike, making the ‘mask’ fit better for him than that of Skull Basher. Speaking of buglike, I like that the build is fairly inventive when compared to the other villains, though still looks finished from certain angles (the side view does leave some things to be desired though). The one thing I dislike about Skull Scorpio’s look is that the tail doesn’t flow as nicely with the rest of him, as you have a lot of CCBS and hints of Technic in his body, though his tail is the exact opposite, utilizing more Technic and less CCBS which kinda breaks the aesthetic of the set.

Articulation is alright for what it is, having fully movable claws, a double jointed neck, and a good deal in the stinger. Now while a couple more joints in the legs may have been nice, as to make him feel less static, I really don’t mind what we currently have, as not only would adding more CCBS increase the weight of the set, but it would ruin the skeletal look that the legs already capture fairly well.

The color scheme for Skull Scorpio is very well dispersed in my opinion, as the trans neon lime and black are more close together (which looks great) and the trans orange helps to contrast these colors nicely.

Lastly the tail function works with the animal Skull Scorpio is based off, as it is very fast and surprising, not to mention configuring the mask grab idea in a unique way.