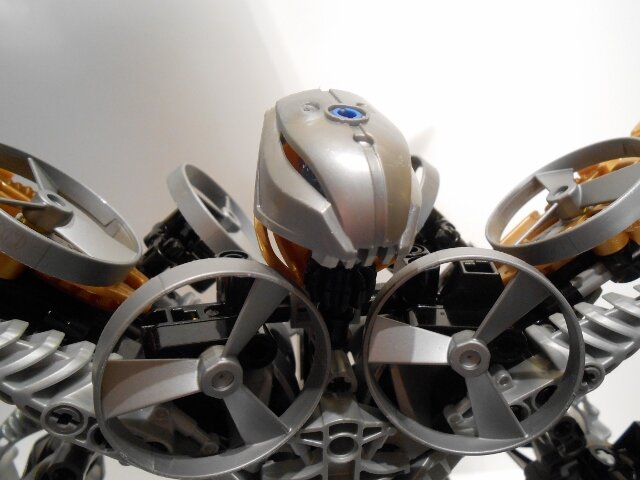 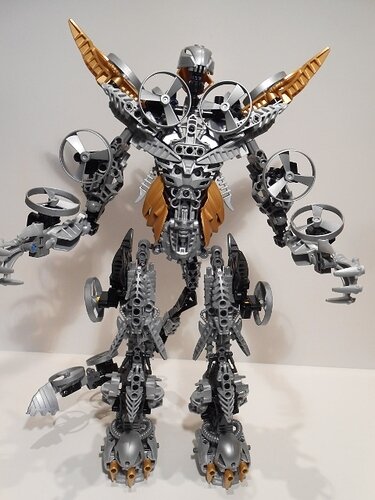 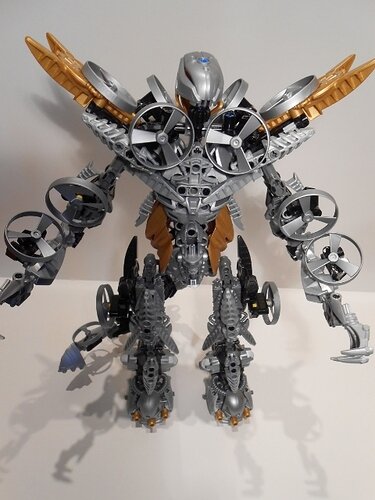 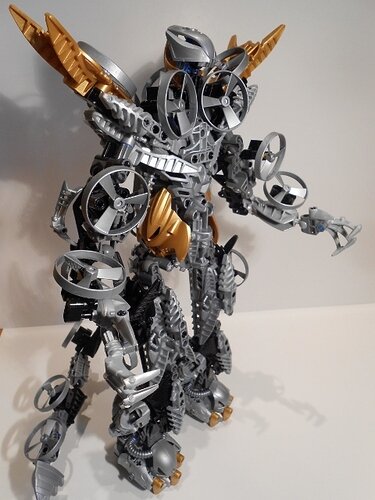 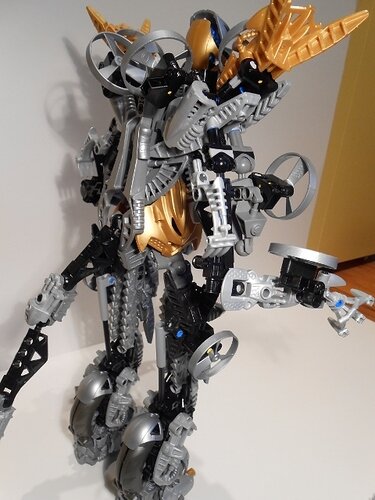 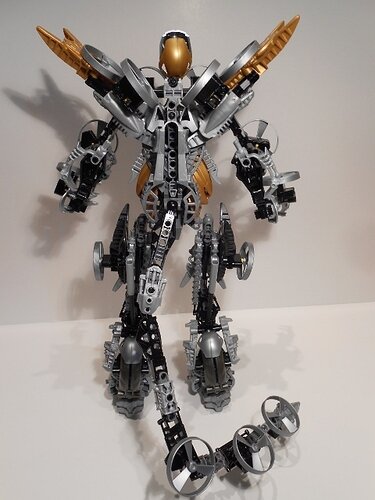 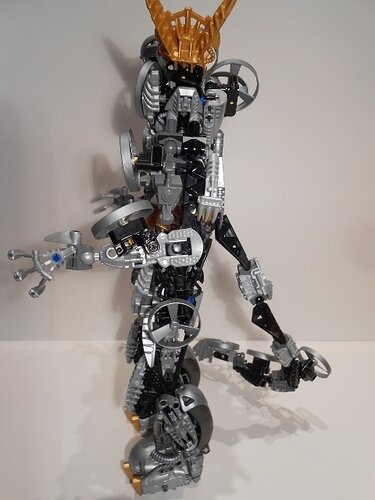 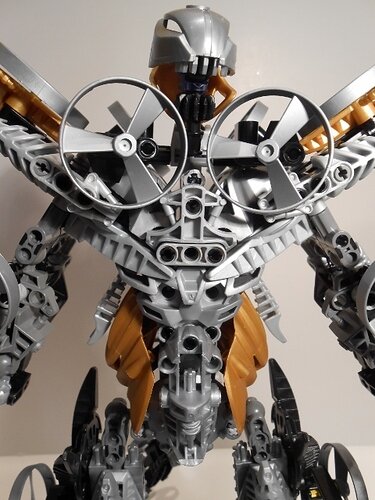 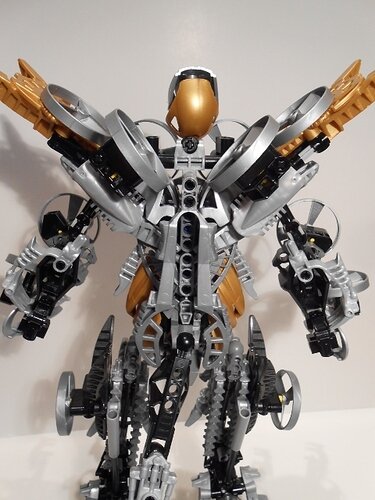 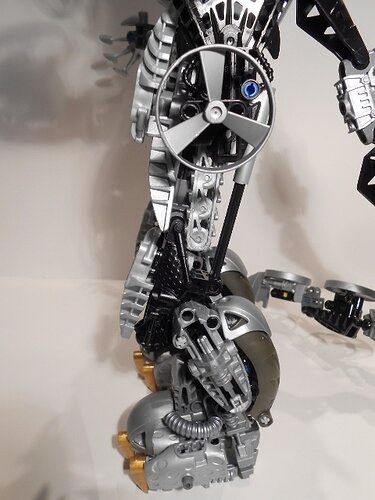 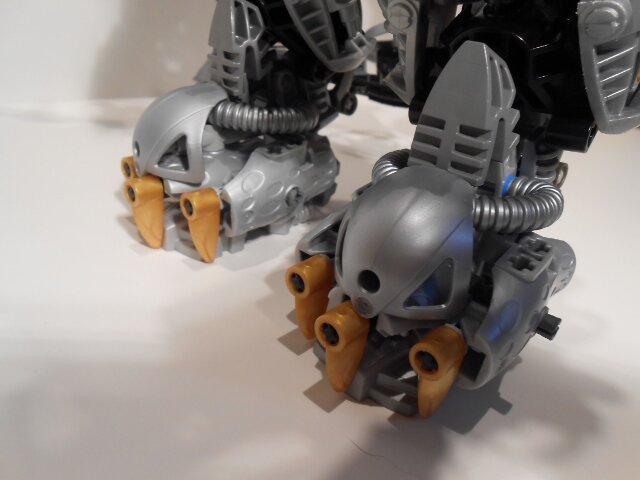 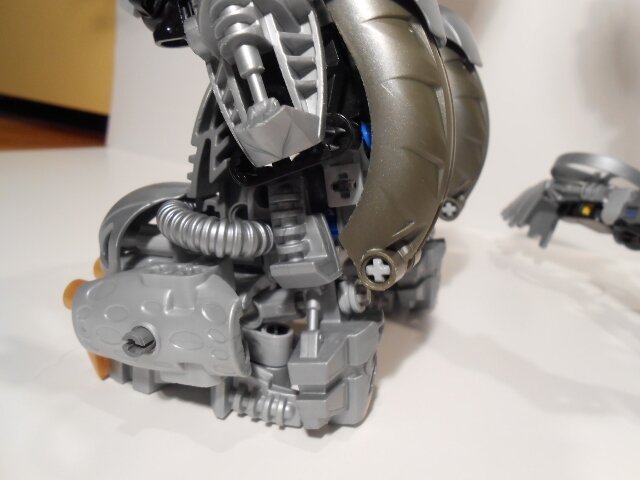 Powers and Weapons: “Wishing Well” has all the typical physical traits of his race, physically powerful and highly intelligent. Though related to his name’s sake, he is covered in fifteen rapid-fire Rhotuka Launchers. These Rhotuka Launchers are far more than the ordinary variety, capable of doing whatever power “Wishing Well” can imagine…for a price. In order for this function to work, he needs to consume widgets and, for a limited time, he is all powerful. Until the timer runs out, and then the launcher gets stuck with the last power used. The fifteen he currently has installed on his body, in no particular order, are stuck with these powers:

Personality: An arrogant madman who believes he is the destined true ruler of the universe and Mata Nui’s usurper. Constantly plotting and seeking to gain any advantage he can, but poor at execution. Swiftly falls into desperation and panic when things start going off course. Though if under his command, the failing of his schemes will be blamed upon the goons and his wrath upon them.

Background: As with many from that old island, “Wishing Well” was once a peaceful creature living out his life until the civil war. Now filled with ambition, he sought to get ahead of the others by an discover made in Rhotuka spinners. These artificial launchers varied based on the being’s attributes, but remained with the same power even if that being changed. He came to theorize that, if the launcher was remade so that it always changed as the being changed, then one could have all power by merely changing one’s mind. And with this, he left for Xia to develop such a launcher.

Between his own efforts and the hired Vortixx, the creation of this power changing Rhotuka came to be. However, unknown to him, the being who would become known as “The Shadowed One” caught word of this project and paid the Xains to alter it. An alteration “Wishing Well” did not discover until a few days after using his new launcher, when it stopped changing powers. He had already gained much ground back on his homeland with his new power, to suddenly lose that ability was devastating and swiftly thrown back. When he returned to Xia to find out what happened, he found the Vortixx dead and all their work destroyed. The only thing he found was a note about needing more widgets in order to make the launcher work.

The amount needed was absurd for it to just last a couple days. So much so that he decided it was better to create and install another launcher instead, which would work initially much faster. He would make and install a couple more before coming onto a new discovery: the more launchers installed, the more widgets needed and the less time it would work in the time-per-widget ratio. And with each new launcher installed, the less time that new launcher would work before needing widgets.

This started to drive him more mad, breaking down as his power slipped more and more. And in this state did “The Shadowed One” finally came to the power-mad kin. With an offer of widgets in return for various different jobs, “Wishing Well” was too desperate to really consider the terms of the deal and joined the newly formed Dark Hunters. It took a couple years, but he finally realized that he was receiving hardly any of the widgets that were paid for the jobs performed. All of it went back to “The Shadowed One,” all out of his hands. He attempted to overthrow the Dark Hunter leader several times, failing each time. And for each failure, his punishment was the installation of more launchers.

In a final, desperate attempt, “Wishing Well” fled the Dark Hunters after taking mounds of widgets from the treasury. He fled far into the south, thinking none would dare follow him all the way there. And for a time, no-one came, so he started his own little mercenary operation to gain more widgets. But one destined day, that old accountant of the Dark Hunters came for the debts owed. Not just what he stole, but all the new profits he gained and did not hand over. He was taken alive and imprisoned; though why alive none are too sure. Though perhaps “The Shadowed One” should be more careful with his kin.

This is a pretty nice moc. I’ll admit the

Is an interesting choice. Though not necessarily a bad one. I can’t remember the last time I saw a rotuka spinner in a moc, and I’ve definitely never seen rotukas in this concentration period.

And aside from the obvious feature, I find the moc itself is very well designed. I especially like the leg build.

Wow! I love the complexity of the MOC!

Got to cheat the system and have a bunch of powers somehow.

This is a pretty nice moc. I’ll admit the

Is an interesting choice. Though not necessarily a bad one. I can’t remember the last time I saw a rotuka spinner in a moc, and I’ve definitely never seen rotukas in this concentration period.

And aside from the obvious feature, I find the moc itself is very well designed. I especially like the leg build.

The previous Dark Hunter I posted, “Name Rater,” also uses Rhotuka, just not in this amount. Though in “Wishing Well’s” original description, he had copper as a primary color. Clearly wasn’t thinking of having to build this fellow when I original was writing him. I’ll be honest though, I can’t remember why I wrote the character with so many Rhotuka. Probably to make him seem more threatening than he ended up being.

Thanks. Though I find the legs to be one of the worst parts. I don’t think it works incredibly well with the torso. Just not sure what other direction to go with them.

Wow! I love the complexity of the MOC!