Xīe, Elemental Guardian of Sand (And also my self moc :3)

Alwight, peps! Hold on to yo hats! Cuz I got another guardian, and he’s also my self moc! :3 I think he turned out awesome! Here he is!: 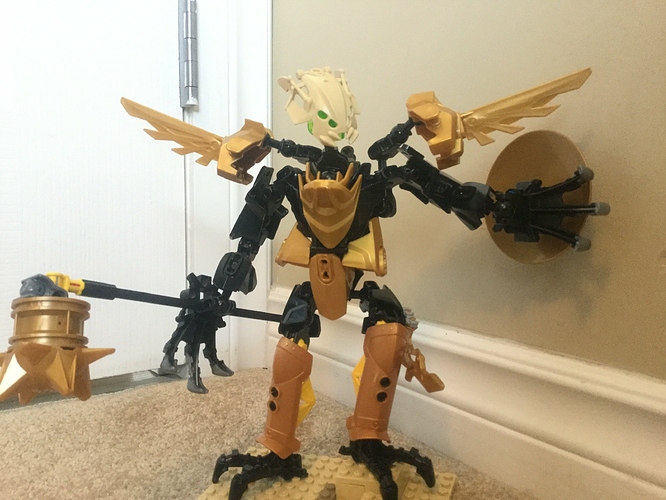 A fact about his name; Apparently “Xīe” is Japanese for “Scorpio”, or “Scorpion”. I can’t remember which one.
I nicknamed him “The Pharaoh”, cuz his royal look. Here’s a pic of him from the back: 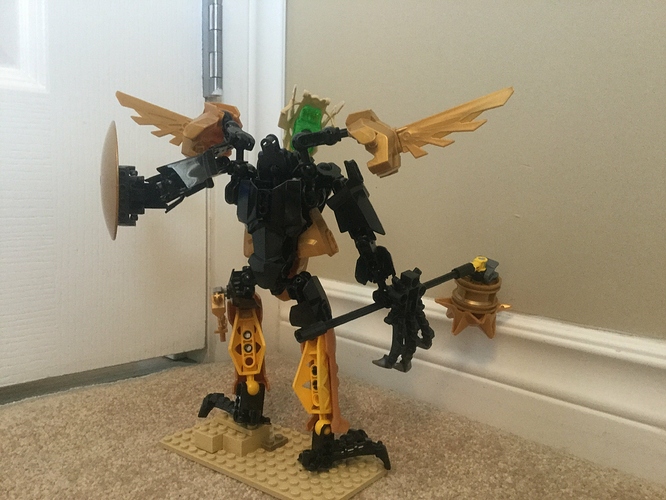 image.jpeg3264×2448 1.41 MB
Unfortunately, he has hollow legs, but I might fix that in the future.
He has a large mace, a shield, and a dagger on the side of his leg. Like I said, he is an elemental guardian of the sand region (or stone, whatever you want to call it.) The sand(stone) region, is a large expanse of desert and savannah.
This guy has never entered a fight he has lost. Here’s him with his weapons stored: 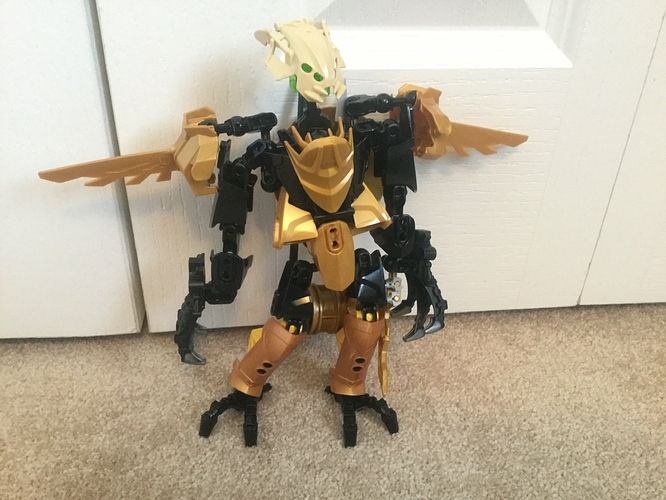 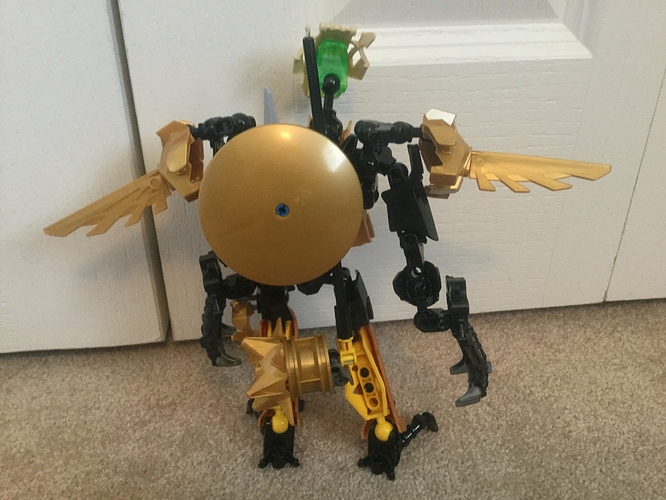 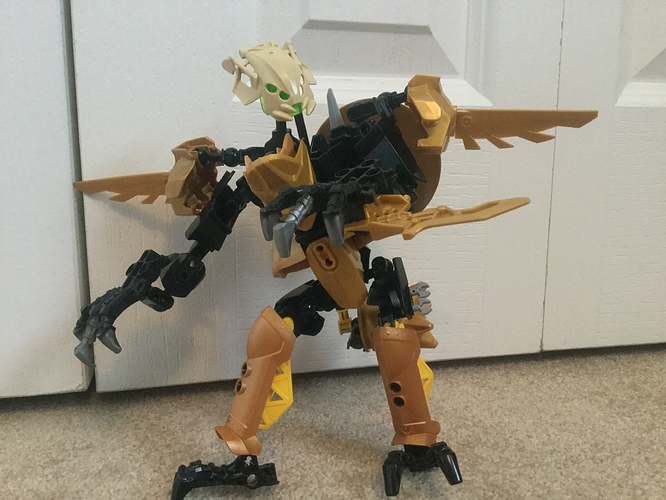 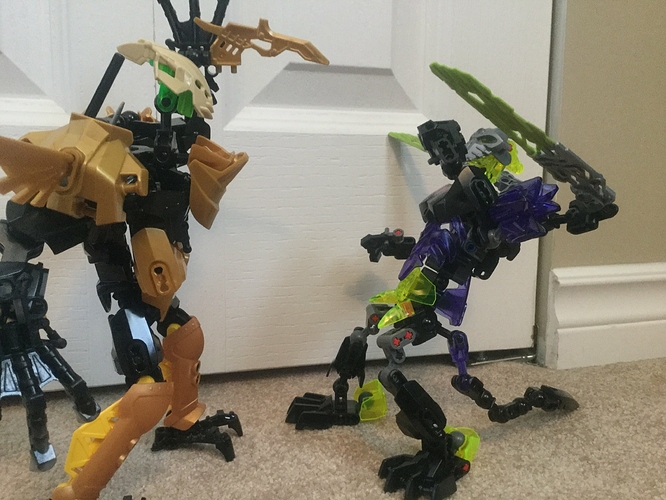 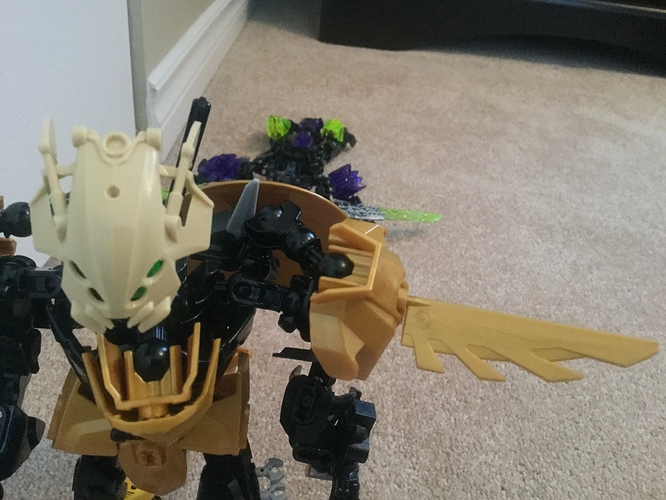 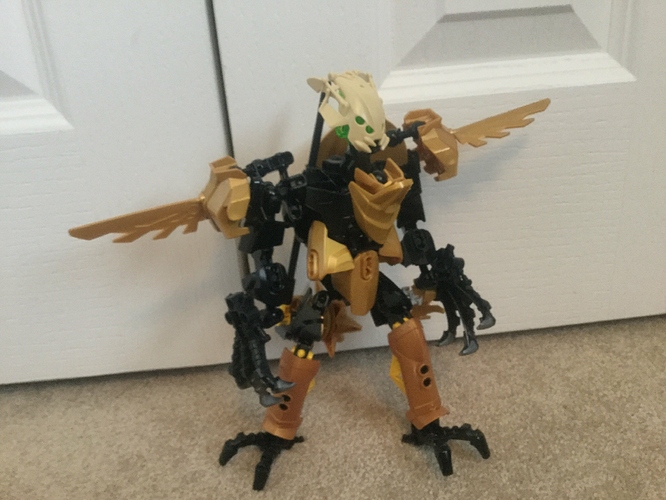 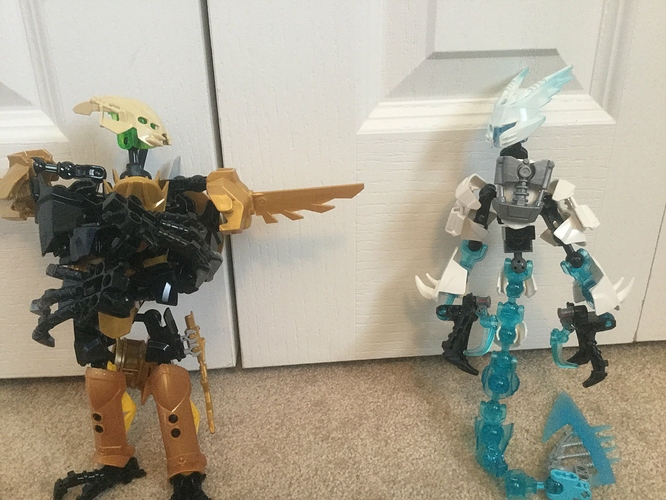 image.jpeg3264×2448 1.52 MB
I think the two look good together.
So, what do YOU guys think? Is it good? Is it bad? is it stupendous? Is it junk? Tell me!
UPDATE:
I gave him a well needed update! Not exactly what was wanted, but getting there: 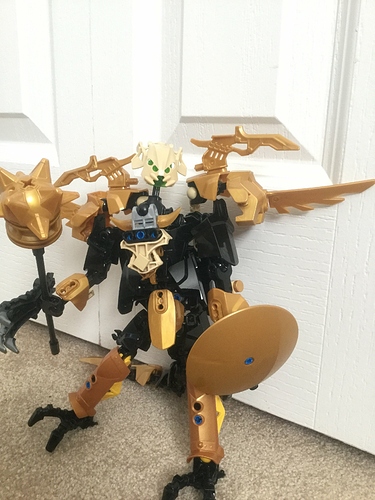 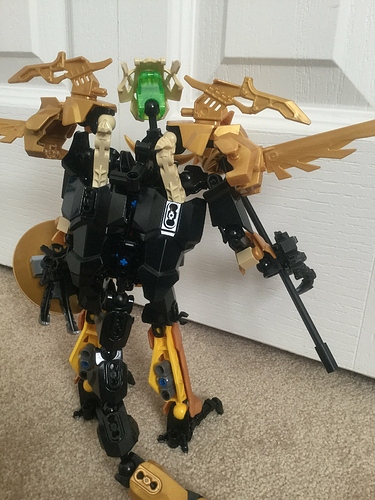 He may benefit from more light beige to convey “sand.”

I don’t have much light beige Bionicle pieces, so gold will have to do…for now.

When you can, try to use less gold, and more tan, beige, etc. The yellow on the back of the legs sticks out too much, use that piece in a different color or use a different piece. The Ekimu armor on the torso sticks out way too far, use a different piece. The mostly black arms need more gold if you’re sticking with that color. The color of the mask contrasts with the rest of the MOC, another reason to use less gold and more tan when you can. The wings are way too small; there is no way he can fly with those things.

Overall, the MOC is a good start, but needs more work.

He’s not ment to fly with the wings, their just decorative.

Alright, I have a lot to say about this MOC, so I’m going to do a review. (if you want to call it that)

The gold doesn’t really make sense with the sand/stone element, but I like it.
However, more light beige could be added however, but I like the gold.
This is a personal opinion but I think he should have a scorpion tail. Because he’s a scorpion guy.
The hands and lower arms are a bit awkward in my opinion, and so is the dagger. (maybe switch the piece for the dagger/sword/knife?)
The hammer and shield are fine tho.
Overall, this MOC is good, but could be better.
7/10

Because the way he is built, there is no way I could give him a tail unfortunately…

Could use more tan.

Doesn’t convey the sand elemental look very well, needs more tan less gold.
Hands can be done way better, the entire torso looks awkward and jumbled together.
Needs a tail if you want it to look like a scorpion, I wont buy the head alone to make him look like that.

The chest armor is very bad, and those side gold pieces on the torso make no sense, and it could use MUCH more trans neon green for example (the G2 stone sets use it for their elemental colors)

And does an elemental guardian need so many weapons? makes more sense to me to just use their elements and whatever natural weapons they have (I.E claws AND A SCORPION TAIL)

He has a large mace

In your other topic your MOC didn’t at all look like a dragon. And here this is not a mace 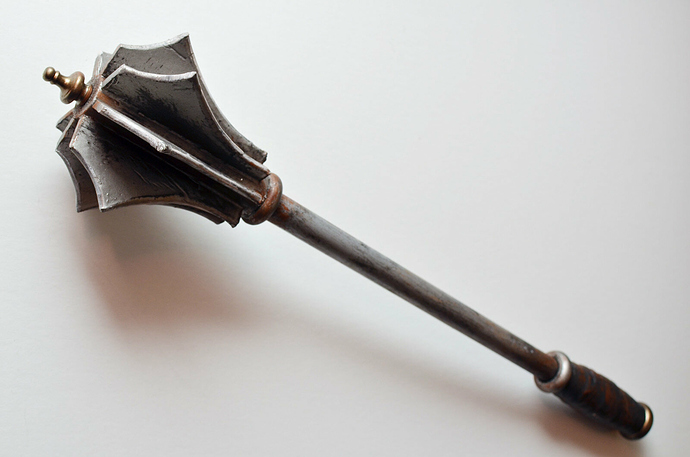 And the dagger holder is a neat idea but its facing the wrong way and on the wrong leg too, and you should only use one hand to have it articulate so it can look like its affected by gravity.

If you look at the build in person you can realize that the way I made it, there is no place to attach a tail

@Toa_Distraxx The gold was ment to look like armour. I tried to get a Egyptian-ey look out of him.

This is a very well done moc! I especially love the hammer.
10/10

Thanks. I actully deconstructed him a few days ago. I’m going to make another self moc, Raxius the consumer.