This is my fourth MOC. Please Tell me what you think! I know it's rather busy and messy, but I'm really proud of that chest plate. Thank you for your input!

This is my fourth MOC. Xiphtann was one of the most intriguing subjects of Makuta Spiriah's experiments on the Skakdi during his tenure as Makuta of Zakaz. Frustrated that he could only give each Skakdi a single vision power and that Skakdi needed to work together to use their given elemental powers, Spiriah decided to fuse three Skakdi together, both in body and mind. Each Skakdi lost their individuality as their spirits were fused into a single collective will: the Will of Xiphtann. Thus Xiphtann was born, bearing three heads, one with impact vision, another with spellbinder vision, and the final with Laser vision. The power of Xiphtann's mental blasts were unrivaled, and he could easily use them to incapacitate any Skakdi he came across. However, Xiphtann rarely used them, preferring to utilize the protosteel swords fused to each of his six hands.
During the Skakdi Civil War, Xiphtann took no side but his own, mutilating as many combatants as he pleased. Xiphtann actually preferred dismembering his opponents to killing them. He wanted every Skakdi to know his name. His efforts were not in vain, for by the end of the civil war every Skakdi knew somebody who had lost a limb or two or three to Xiphtann. So many were the Skakdi that had lost limbs to Xiphtann that when Makuta Krika took over Spiriah's post, he ordered the Nynrah Ghosts to begin mass production of prosthetic limbs. In the meantime, Krika recruited the aid of Gorast and Icarax in order to take down Xiphtann. As powerful as Xiphtann was, he was no match for three Makuta, although the fight did not end quickly. As Gorast was about to slay Xiphtann, she was tackled by a dozen Skakdi. Countless Skakdi followed them, attacking both Gorast and Icarax. While she and Icarax were dealing with their assailants, the leaders of each of the warring factions in Zakaz approached Krika and arranged for Xiphtann to remain alive in their collective custody. You see, Xiphtann had become a living legend on Zakaz. Those that had lost limbs to him took great pride in that fact and Xiphtann elicited from the Skakdi population something that no other Skakdi ever had: respect. Krika agreed, providing the warlords the same type of chains he had used to imprison Miserix on Artidax.
The warlords agreed to have Xiphtann chained to the rocky shores of Zakaz's central lake, the only no man's land on the island. Despite being chained and unable to fight, Xiphtann was still able to satisfy his desire for bloodshed, albeit indirectly. It was well known that Xiphtann sought to singlehandedly conquer all of Zakaz and that he was extremely wise, because he possessed three minds. While one of his minds was always focused on what he was doing, the other two were often pondering the mysteries of life, power, and the superiority of the Skakdi race. Seeking to gain from his wisdom, each of the various warlords of Skakdi would sneak to the shores where Xiphtann was chained and consult him, seeking advice that might grant them the upper hand in the unending Civil War, oblivious to the fact that each of the other warlords were doing likewise. Xiphtann used this opportunity to perpetuate the civil war on Zakaz. When the Skakdi and the Skakdi fusion left to invade Bara Magna, they abandoned Xiphtann. When Makuta Fell, Xiphtann's chains were destroyed and he escaped to Spherus Magna. On his way out, he he found many Skakdi that had decided not to follow Nektann and fight for Makuta. When he and his band of Skakdi reached Spherus Magna, Xiphtann resolved to liberate the Skakdi that had become entranced by the Skakdi fusion and lead the #SkakdiMasterRace on Spherus Magna as their new emperor.

I know right? I'm terrible with legs, and these are mostly reused. Any advice and tips for legs would be appreciated.

Custom legs are the way to go for a guy this huge...

I'm still pretty new to this, what are custom legs. Also, what do you think about the torso?

Hey Irnakk, I found your cousin!

Exactly what the name implies. Just take the parts you have and do what feels right.

Legs that don't use pre-made parts (Inika legs). Start with using Glatorian necks and sockets, and use technic connectors and beams to connect them together at opposite ends. Allows more freedom in length, width, and armor add-ons.

Meh. Chest should stick out more. Avoid using large plate pieces because it makes the torso look flat. There should also be a discernible "flow" from the body to the heads.

In my defense, I couldn't make a Skakdi MOC and NOT use Irnakk's Spine. Tbh I didn't really have a choice, given the Color scheme, considering Hakann's spine was Metru Red and Thok's white parts were slightly dimmer than the standard white parts. 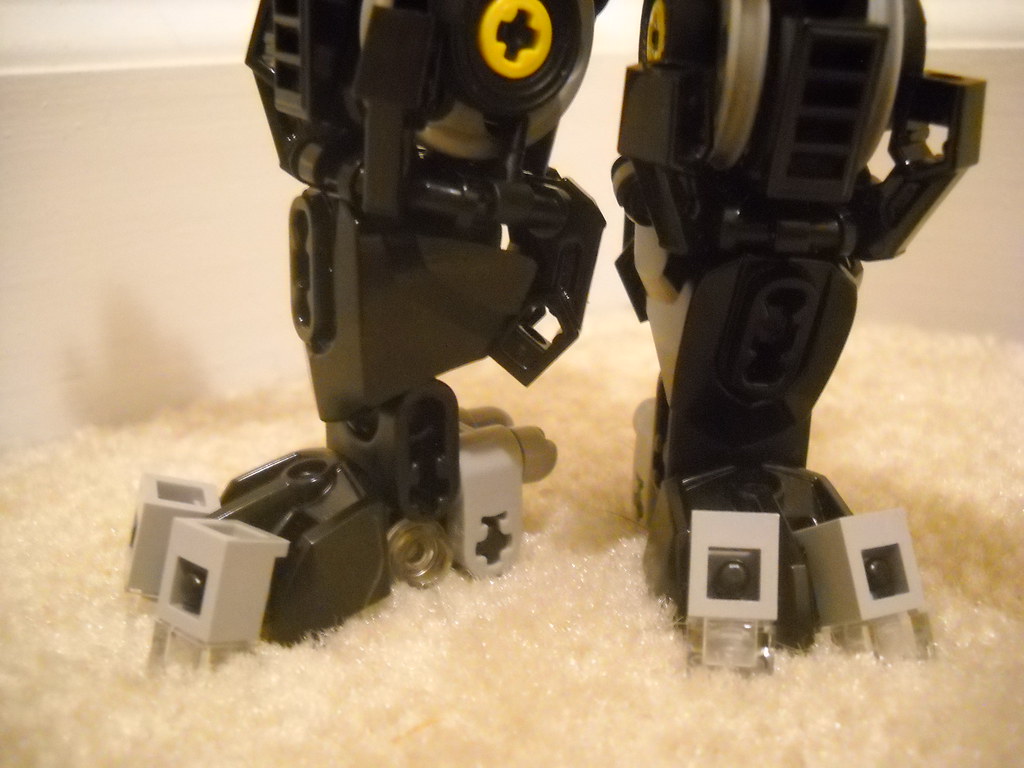 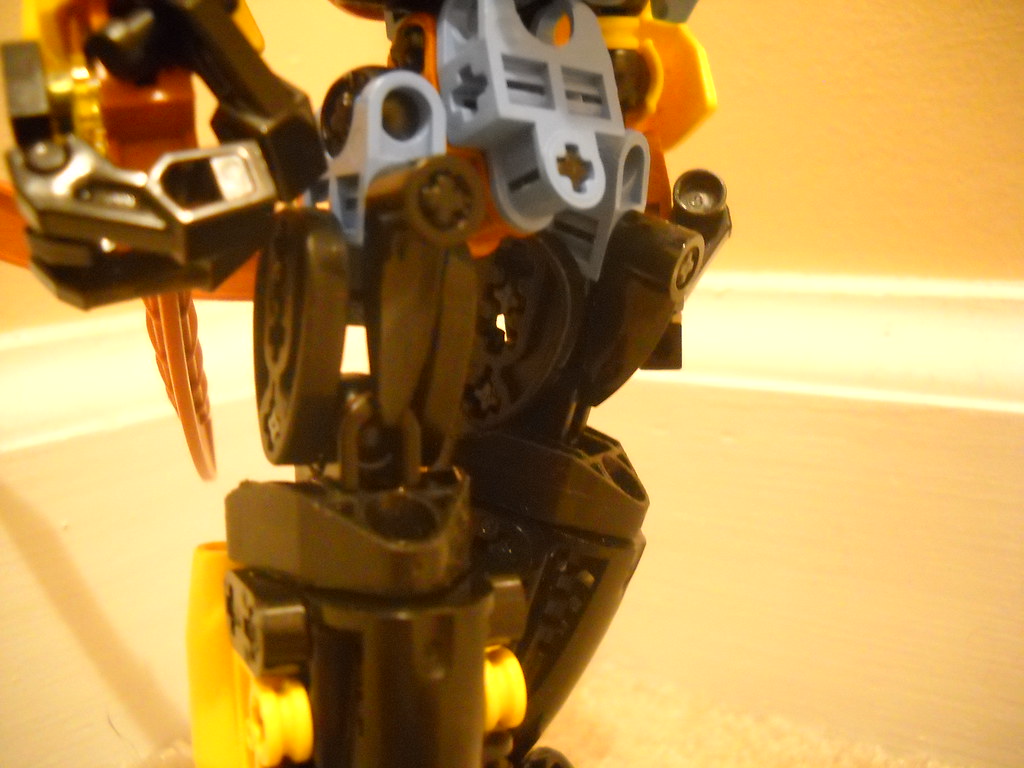 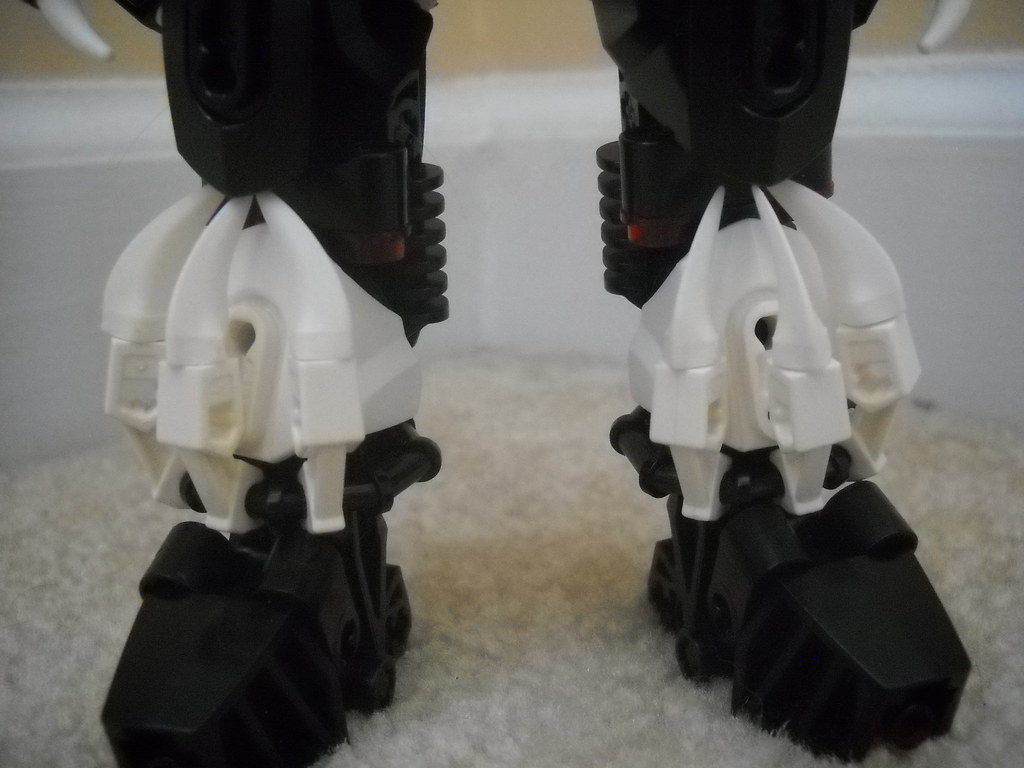 These are all custom legs.

PM me if you're interested in advice, but please remember that I am a bit like Batman.

Okay, that's what I figured, so like '08 Takanuva's legs.

hhmmm..... You got any phantoka torsos? I've got a design I've used on my self moc involving Inika torsos, if you don't mind giant bell-bottoms on the legs

the chest reminds me of avatar(blue people film). one of the royal people wears something that looks like that . if it's supposed to look like some sort of robes I think it worked really well, if it's supposed to be a normal chestplate then I agree with Rocksteady try to avoid using those large plates.

I really like that pose you put him in in the second picture (:

OMG. I wouldn't argue with this guy.

That chest would be perfect for a mech or giant robot.

On a biomechanical, though, it's much too flat.

It's actually a Golden Retriever. He's a good boy.

The dog or the MOC?