You decide the backstory, character and bio of this table scrap moc. 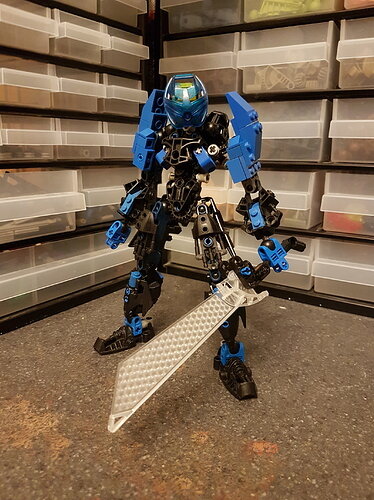 What you see in the picture above is one of my new mocs who happens to be a table scrap so I don’t have much of an idea of what to do with It so I’m asking you to do something with this character and in form of a game, sounds fun, right? Well I hope so at least.

Anyways there are some rules and clarifications I need to make first. I won’t be all up in someone face if they break any of the rules but please do follow them anyways I don’t like being to bossy on people.
All post must align with the boards rules
So that as many people should be able to contribute with something I’ve set a temporary maximum of 250 words per post per player. This means that you can write a 250 word long post first and then at a later time write another one that doesn’t continue on your last post but give others a chance to contribute as well
After 100-200 post if it ever reaches that amount I will try to merch everything into a fully fletch character.
All posts I’ve checked will be quoted in this post so if it isn’t quoted don’t worry I probably just haven’t read it yet.

So what information about this character do we need to know:

That’s all good luck and have fun. Happy writting everyone. Also @Mods if you think this is in the wrong category feel free to change it

Hmm, can’t whip up everything on the spot here, but a few things come to mind pretty quickly:
This definitely comes across as a warrior, probably a sell-sword from the aesthetic. I’d imagine him being a pretty solemn fellow, not the sort to let emotions get in front of his business.

Anyways, I’ll give this a shot:

Not my best character concept, but I think it’s pretty cool.

I gotta say, I love this idea. I might actually steal it and do it with drawn character designs, if that’s alright with you, @Tarkur.

Why on earth did I spend this much time writing this? Well, either way, here it is.

Name: Tekona
Personality: loud, troublemaking, funny.
Profession: Weaponsmith
Title: The raging waters
Rank: High Commander
Species: Toa
Backstory/Bio: Tekona is the Toa of Water, of the Militarion Toa team. Since the militarization of the Matorans, the Toa are now simply high-ranking warriors in each army. They often come together to form an elite strike team, the Militarion. They fight against any threat to Mata Nui. They also have advanced battle tactics, often outstripping even the most highly ranked Matoran.

Well, that was fun.

His name is Bimblor. He fights so valiantly that Death itself cannot touch him. Unfortunately, immortality has grown boring. Bimblor now wanders through dimensions aimlessly, challenging others to dismember and maul his body, only to reform good as new. The only thing that keeps him sane is having eternity to master the unuasual instrument of your choice. I suggest the accordion.

Glad to hear you’ve enjoyed it so far. I could probably let you use the idea just be sure to give me credit for the concept.