Ziontyro Metalhead is a my favorite character and has a very unusual ability. He has the ability to use any elemental or energy ability that he is exposed to after extensive practice. This is due to his elemental mask, which emulates the ability of superconductors which to not lose any energy due to resistance. I know an avokhii is really common for selfmocs, but it was the closest thing to what his actual mask would look like. Also, those gems represent the six main elements. 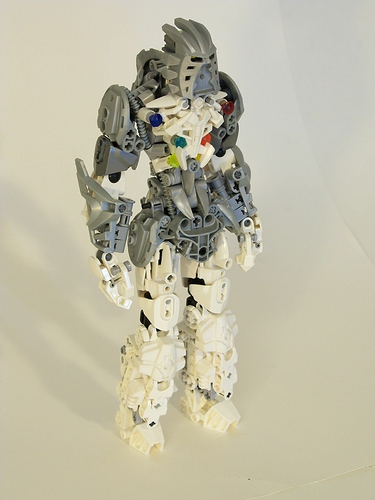 I know that his ability seems overpowered, and I realize that. It’s too cliche to have an overpowered character. So, here are some limitations that he has on his abilities. Firstly, the original exposure that he has to any energy attack, he feels the full force of that attack. To gain solid elemental forces, he must consume the raw form of that element. Again, he must suffer the full consequences of the substance for the original exposure. 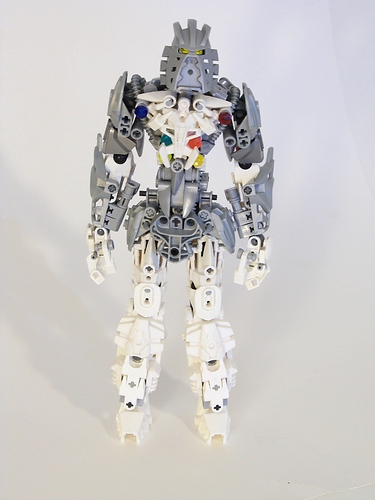 Secondly, after the initial exposure, he must still practice for days in order to get a useful grasp on that ability to be remote fully useful in any sort of battle situation. The more he practices, the better he can use that ability, and the less that element will hurt him if he gets hit by the element afterward. Due to this long period of training, he can only master one or two elements at a time. The rest of the skills he has will fade when disused, just like any talent we have. He does have favorite elements that he uses. Mainly he uses electricity and magnetism. It is also the ability that he is closest to mastering, but he has not mastered any one ability so far. Rather, he tries to use several of his abilities, and specialize a use for them. 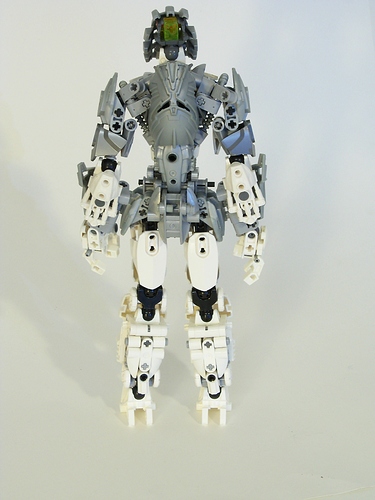 This power is based off of me. I can learn stuff quite easily, and I can learn things easier than most. I have a lot of ‘talents’, but really they are just me trying to push myself to learn new things. There’s not really any purpose to sitting around doing nothing. It is much more interesting to make something new, or learn something new. 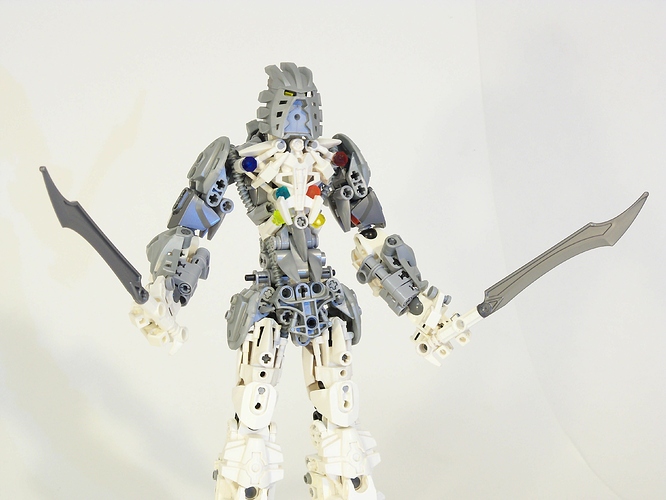 His look is also based off of me. I know he looks quite boring and somewhat generic, but I am the same way. Unless you know me, you would think I’m any other teenager. I really don’t act like a normal teenager. I want to continue learning new things and I wish school would teach me more. I would even stay in school longer if possible.

As for Metalhead himself, he is a humble character. He doesn’t like showing off all that he can do, unless he feels that it is really warranted(which is never). He gets embarrassed when others loudly congratulate him on what he has accomplished. Metalhead, like me, has doubts on whether he should have any of these abilities at all. He feels like he doesn’t deserve to have them when others are much more wise and noble than he is. Metalhead is also socially awkward, and doesn’t talk much, but would love to teach others on how to do something and to help others. Although he is anxious about a lot of things, those things won’t keep him from reaching beyond where he is now and learn and try new things. He and I both want to be better people, and we work to get to that point.

Enough of me rambling on, here’s more pictures. 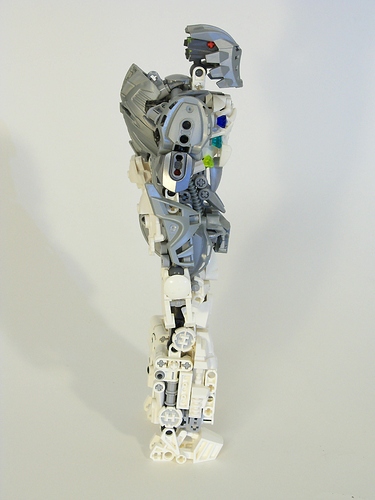 A side view of him. 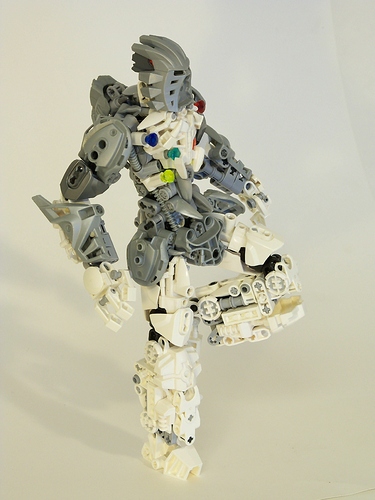 He has great knee and hip articulation. His waist armor doesn’t affect movement much at all. 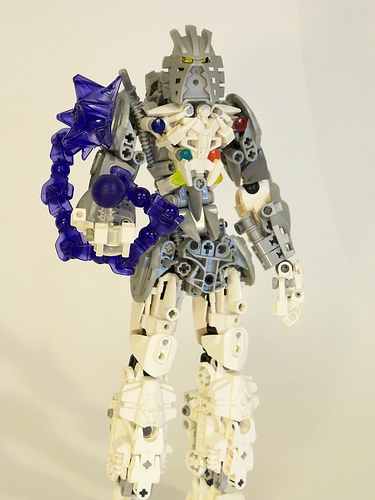 Using the power of Gravity

Here’s the link to the rest of the gallery, I highly recommend you go check it out!
(it’s on flickr). 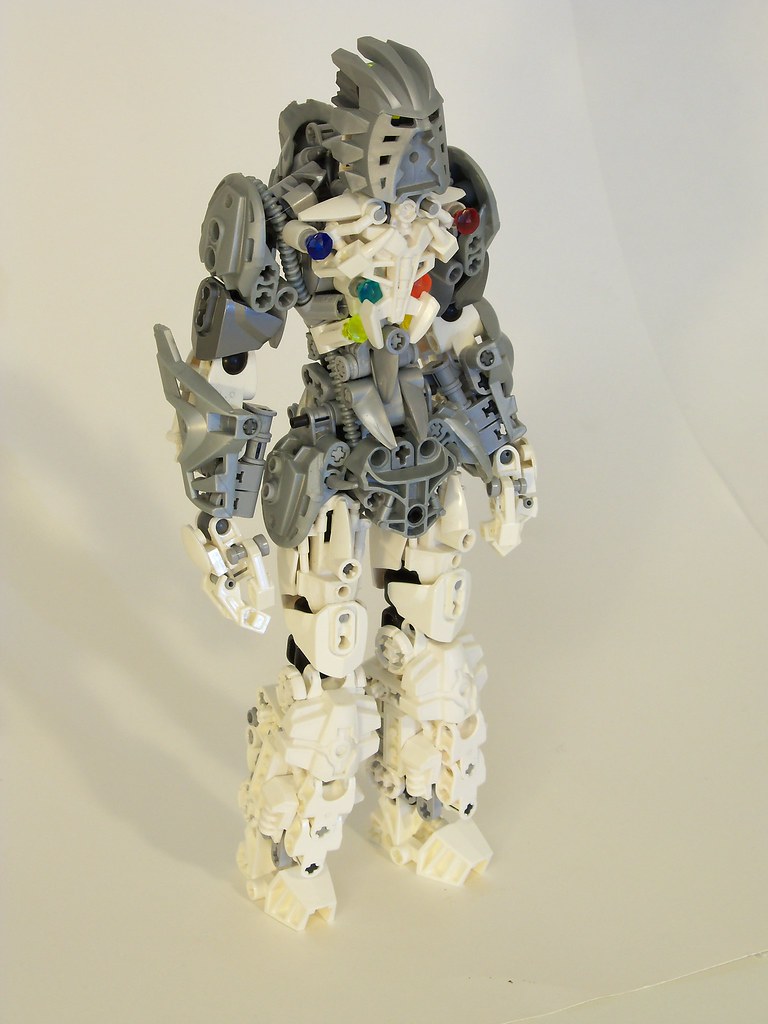 seems fairly alright, Just wish he wasn’t that strong. Personally I would prefer that he has a set amount of like, less than 8 elements and, if he chooses to learn a new one, he has to loose one of the few he lost

otherwise with the avohkii he jsut looks like a drained Takanuva, though then he’d just be a toa of ice or light or soemthing with white

Well, it seems like you did read the whole thing. Remember that he has to practice an extremely long time to just get a handle on a single element. In order to get somewhat decent on an element, he has to practice for days at a time. He also still gets hurt still when hit by those elements until he masters them, which it is literally impossible to do that with more than a couple of abilities, and event then, he wouldn’t be able to practice any other abilities while keeping mastery of others. There is a limit to how much time he has, and that in itself is a limit on how many he can be proficient in at any one time.

Sorry for the rant, but I really want people to understand that he literally cannot have every element in use at once, he simply doesn’t have enough time to practice all of them without neglecting others. Maybe I should rethink on how to explain this.

I’m not trying to argue, and I think that I haven’t explained it to show it how well I want. Thanks for the suggestions, I’ll consider these points if I want to rewrite his abilities.

I understand and I respect that. Though the post could’ve blatantly said “He can’t have every element at once”. Either way he looks alright,

Well it looks competently built, but it’s way too greebled for my taste.

And it just looks like stars takanuva to me. Maybe if it had a different color scheme or something.

And the power is kinda idk, feels like you couldn’t decide on an element.

He looks very interesting. The use of the MoL on his back was an interesting choice

His look is also based off of me. I know he looks quite boring and somewhat generic, but I am the same way. Unless you know me, you would think I’m any other teenager. I don’t give off an air of intelligence, or talent, but I rather surprise many when they figure out what I can do.

To some extent I can forgive this, but did he really need an avohkii?

out of curiosity, what mask would you recommend?

Always loved this guy! Everything about him is just so perfect.

The torso being messy is my only complaint. This is a prime moc.

Th Ignika looks odd on his back (plus it kinda looks like he’s hunched over because of it ), and I’m not really a fan of the different coloured studs on the chest. Though they may be story relevant, it still looks weird . Apart from that, he looks cool

MoC looks fantastic. I won’t understand why people are complaining about the use of the avohkii. It fits perfectly with the MoC. He does seem a bit hunched over.

Ziontyro Metalhead is a unique character and has a very interesting ability.

This sounds so immature and self-justifying a character. I hate that. Please, just tell us about the character and not give us reasons as to why he’s good.

That aside, the MOC is nice.

Don’t know if this has been said yet, but I feel there is too much white on the legs, and too much grey on the torso.
Other then that, there is nothing wrong with Metalhead.

I love the “Limitations” section. He is the well-fleshed out character that everyone can get a good impression of. The Avohkii is still overused imo.

######I’m thinking on a RP with only self-MOCs or secondary sMOCs.

@Hawkflight I don’t know if you read the whole thing, but I did explain it further along. If you could also try not to be as rude if you don’t like something, that would be nice.

@DG_Eddie Thank you for reading the whole thing. It seems to be something not many people do. I know it’s overused, but it fit the character the best. Thank you for your input.

@AdamusTheFirst @ToaSonus I was trying to have it look like he had some sort of backpack, but it does blend in a little to well to be noticeable as that. Thanks for the comments!

@Hutere_The_Toa_of_Air Thanks! I’m going to try and fix the messiness on his next version.

@SwagMeister It was the closest thing to how I drew his mask. I eventually plan on making a custom one to replace the avohkii.

@TheRed1s Thanks! As for a mask, I would choose the one that you feels fits your character the best. It really depends on the moc.

@Payinku It explains it in the description if you would read it.

@Payinku It explains it in the description if you would read it.

I did read it, it feels like you couldn’t pick an element. It feels indecisive.

@Hawkflight I don’t know if you read the whole thing, but I did explain it further along. If you could also try not to be as rude if you don’t like something, that would be nice.

I did read part of it. It seems thought out well enough. That still doesn’t change how he wording you used and “buffer” words you chose made you sound like you were trying to qualify yourself, which you really didn’t need to do. Just matter-of-factly state the ability and it’s limitations, don’t behave in a way that says “these are reasons why you should like me.” Heck, you could have just posted the MOC without a story, I don’t have problems with that.

And to address the second part of your reply. Hi, I’m Hawkflight, best known for MOC criticism and waiting to see whether people overreact or not.

Well then, I’ll remember to choose my wording more carefully then. I wasn’t trying to boast, and that’s not my demeanor at all. So thanks for the criticism…I guess.