I did this for 810NICLE Day, but forgot to post it here. Whoops!

Basically my intention was to create a visual that allowed you to compare related events in the 2001 storyline at a glance. 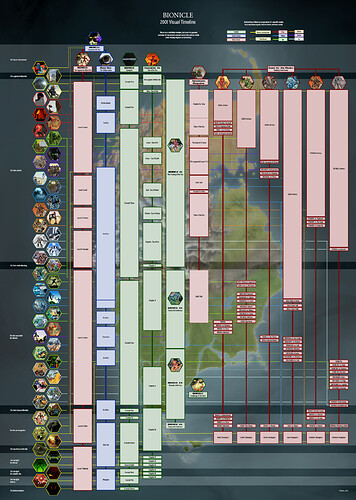 Unlike the many projects that focus on retelling the canonical story in a set order, I wanted to provide a resource that allows you to read the story in a way that makes sense to you (Including “lesser canon” such as the unpublished draft of Chronicles #1, and Legend of Mata Nui). Obviously there are contradictions, but I feel like overall they help fill in the gaps of the broader narrative.

For example, comparing each depiction of Tahu’s arrival, we see that:

There were also two scenes cut from Chronicles #1 that I believe were adapted from the LEGO Adventures comics: In Lewa’s chapter, he meets Kongu. In Gali’s, she meets Lewa. Not only does this happen before Pohatu and Kopaka’s meeting, but it adds more context to Lewa and Gali’s interactions in the DC comics. Since they were already acquainted, it makes sense they’d check in with one another after the Toa part ways!

Many of the other events may be only loosely connected through characters or location, (such as when Lewa and Kopaka are in Le-Wahi) but I tried to organize things in a way that could be read more or less chronologically. My thinking is that even if something was adapted from another source, the creators may have interpreted it differently.

Anyway, I hope the graphic is interesting and useful (even without the non-canon things!)

(BTW, although I had hoped to do a similar graphic for the other years, this took a lot more time than I expected so I’m not making any promises!)

Wow this looks pretty complex. Clearly a lot of work was put into this!

Love me a good infographic

Nice job and I love that you are comparing different versions of events!

oo this is really cool!

wow really cool to see it laid out like this

2001 is difficult to put into an accurate time-frame because of how spread out the story was media-wise. The novel makes clear references to the comics, and both MNOG and LoMN continue immediately following the GBA game. But they don’t really work all together.

Still, it was kinda fun to revisit the story this way. It surprised me how much the LEGO Adventures comics had in common with everything else when I looked closer!