From student to soldier, Vhisola has been called upon to serve in a new Toa team. She may revel in her new-found fame, but a hollow idol will not save this world from chaos.
(See end for information on the Toa Project.) 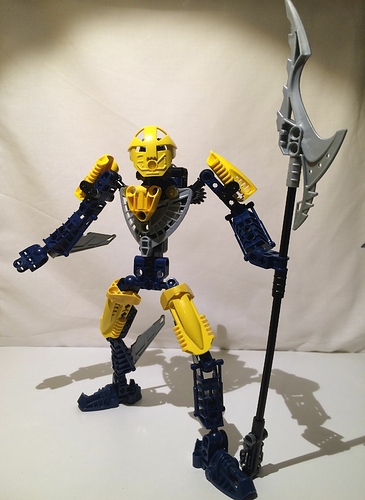 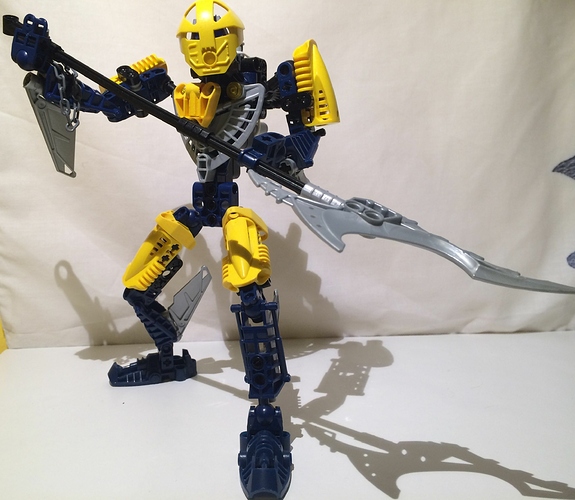 Those of you that have been following the Toa Project were probably expecting Tamaru before Vhisola, however I’m running out of time to do these reviews and I haven’t received his mask (or the other three Toa’s) in the mail yet. 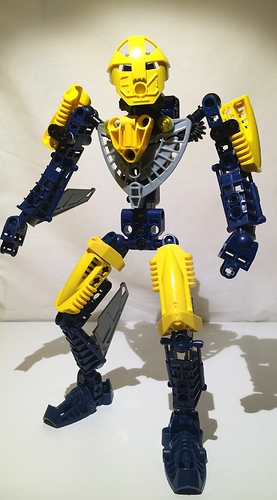 My goal with Vhisola’s build was to emulate a deep-sea diver with thin limbs and a thin body.
This thematic choice also helps imply femininity, which I didn’t want to go too overboard with (Roodaka-ahem). Her thin waist, wide chest, and broad and upward-pointing shoulders also give the impression of a straighter posture that is more prominent in females.

Attached to the back of Vhisola’s arms and legs are fin-like pieces which bring out the underwater theme pretty well. 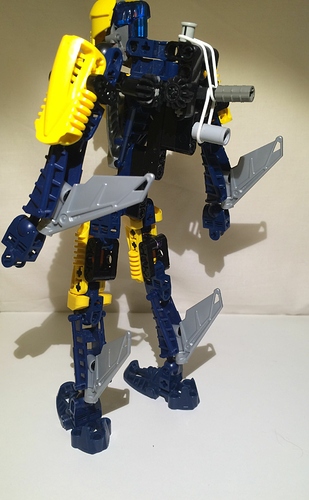 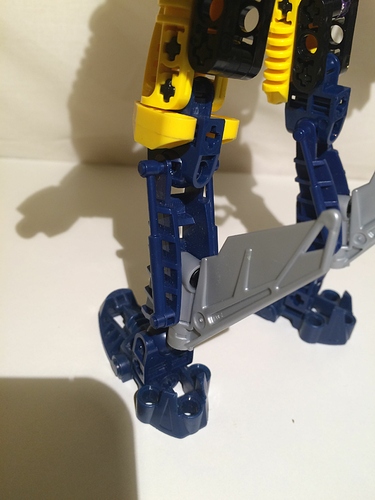 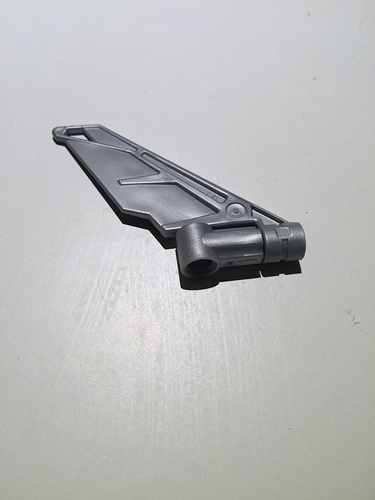 Vhisola’s upper arms and legs are built similarly to Kaj’s. 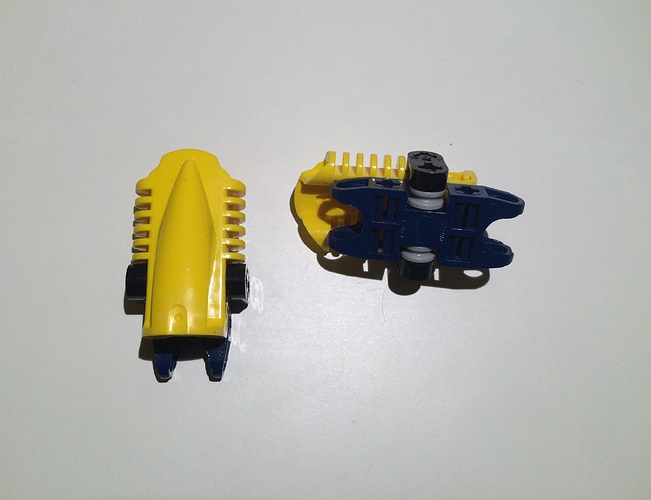 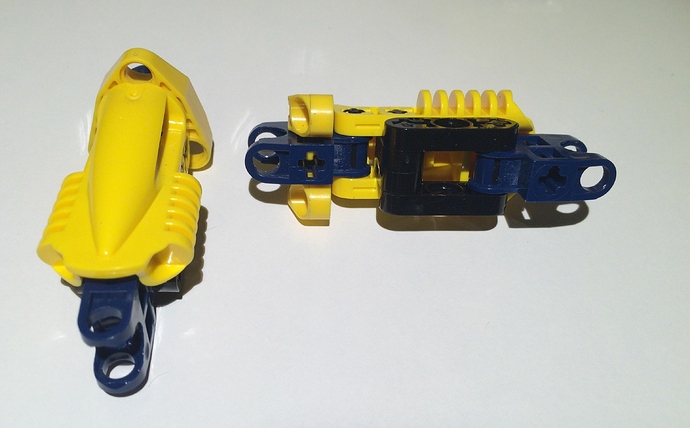 Vhisola’s torso is built from a Hordika torso and the lower section of a Vahki torso. 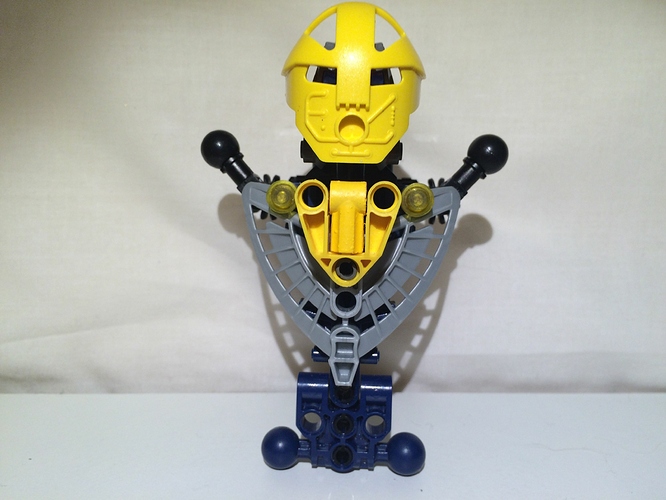 IMG_3806.JPG3264×2448 1.27 MB
Hordika chest armour was added along with a yellow pin connector, the connector being used to make the chest less flat.

IMG_3809.JPG3259×1545 550 KB
This was originally meant to be a harpoon, then I realised harpoons are supposed to be fired out of a cannon (duh). The chain was originally supposed to mimic the rope attached to harpoon spears, however I thought it worked well so I kept it.

Vhisola’s gear function causes arm movement parallel to the length of the body. The Hordika torso is pretty useful for attaching the gearbox. 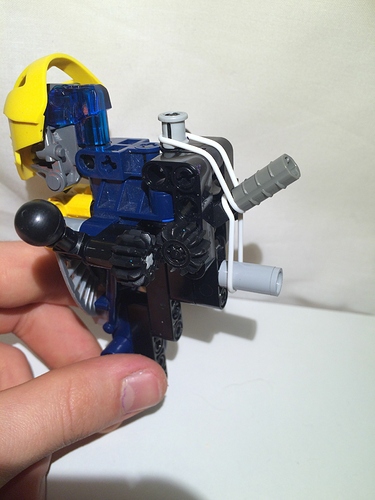 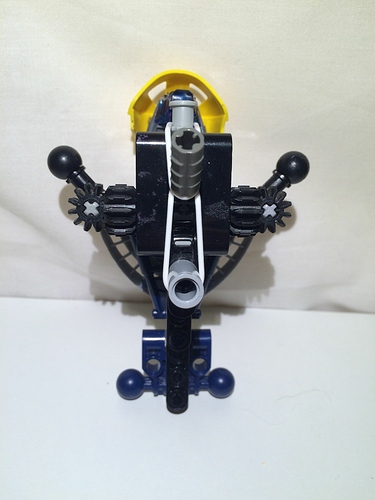 IMG_3813.JPG2448×3264 1.3 MB
Since both arms must move in the same direction, the gearbox is controlled via a button lever which is pulled up and down. The two elastic bands keep the arms at the normal position while this play feature isn’t being used.

Having trouble working out why this is a good idea? Take a look below. 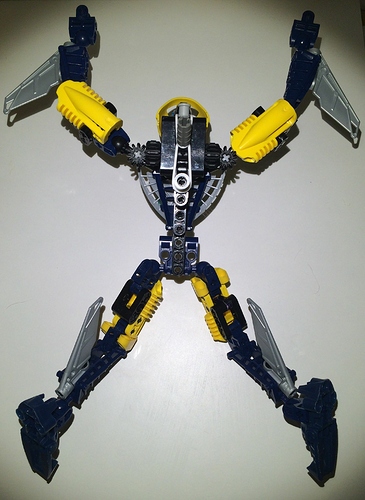 IMG_3815.JPG2161×2957 1.03 MB
When positioned as shown, moving the lever will cause Vhisola’s arms to move radially, making her look like she’s swimming.
Alternatively, if you keep her stood up, you can pretend she’s waving frantically at a friend she just saw across the street.

The only part on this set that’s painted is the small yellow piece that attaches the pin connector part to the chest. This was simply because I didn’t have one to spare. 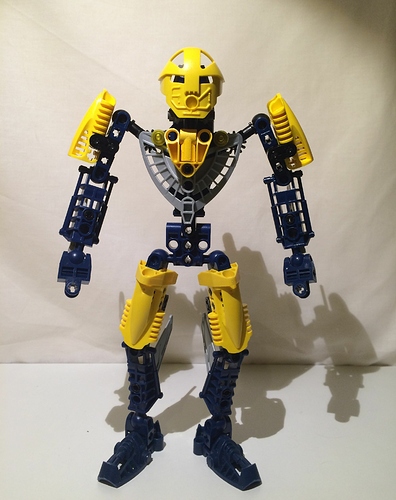 Regarding Vhisola’s mask: I chose a yellow Komau rather than her traditional dark blue one for three reasons:

Following my completion of Kaj, I decided to create an entire Toa team using existing characters, taking great inspiration from the sets and stories of the 2001-2003 era of Bionicle.
All of my designs will have a unique gear-based function, a creative build and an innovative colour scheme.
Each time I release a new Toa, I’ll reveal the next.

Please leave comments and suggestions for improvement for Vhisola and the coming Toa MOCs. Once I’ve completed all six Toa, I’ll address any criticisms and share the improved Toa in a single post.

#Next Time: Tamaru, Toa of Air 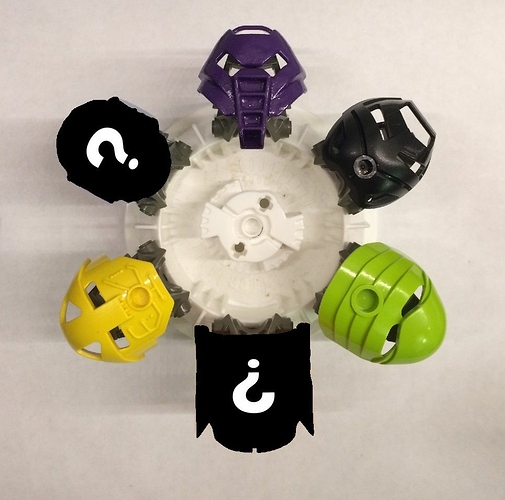 (Tamaru will be complete once my lime Rau is delivered from BrickLink, however this may take some time. Please be patient.)

Quick reply. You must be a very passionate fan

It has a freaking swimming function.

There’s one thing though, I didn’t immediately think of a scuba suit when I first saw it until you mentioned it…not sure how you could convey that better…maybe a tube that runs across her body?

The colour scheme is solid but is a bit bland just for my taste…It works but a trans accent would make it even better and more vibrant. Maybe trans light green?

I’d love to see a video on how the function works.

It has a swimming function awesome. I too get a scuba diver vibe with all that yellow and the long feet reminds me of flippers.

Torso looks Good but the Limbs are too basic
8/10

Alternatively, if you keep her stood up, you can pretend she’s waving frantically at a friend she just saw across the street.

I’ll be sure to consider it. I move back to university on Sunday so I won’t have the time nor resources to make something particularly decent, that and I might not end up bringing the sets with me anyway. If I can post all of the Toa before early Saturday (so that I can receive criticism and repost them all together with improvements and added content such as gold masks), I’ll see if I can make a video review including this kind of thing. I’ve also had a request to show a build guide for Hafu’s gearbox which is something I was hoping to do as well.

I really appreciate all the feedback. I’m relieved to hear that Vhisola is far less controversial a set than Kaj or Hafu, though any problems will still be addressed or at least considered (I know of a few problems with Vhisola that aren’t too noticeable without having the set in hand).

The major criticisms with Kaj have been addressed and Hafu’s paint job and short arms are being worked on now.
All of the other Toa are very much near completion and should be arriving soon (assuming their masks get delivered from BrickLink some time soon -.-).

Nice gearbox!
I like the colours in this too, and while I also like the fins on the lower arms, I think it looks a little odd on the legs because they are pointing the opposite direction to what would make sense to still function like you’d expect them to.

I was wondering when someone would notice. This is something I’ll be changing for when I repost the build.

I don’t think I’ve ever seen a swimming function

Thanks for this project, I’ve been really enjoying it! Interesting choice of using yellow, it does help the color scheme allot and looks good, but a part of me still would have preferred a ga-koro color scheme. (Even though it’s just different shades of blue)