As a Matoran, Kalama had already seen his fair share of combat in the Ta-Koro Guard, and later as the leader of the Ta-Metru Guard. Now, as a Toa of Fire, his duty is to lead his comparably inexperienced team to victory, and to discover the secret behind their transformation into Toa.
(See end for information on the Toa Project.) 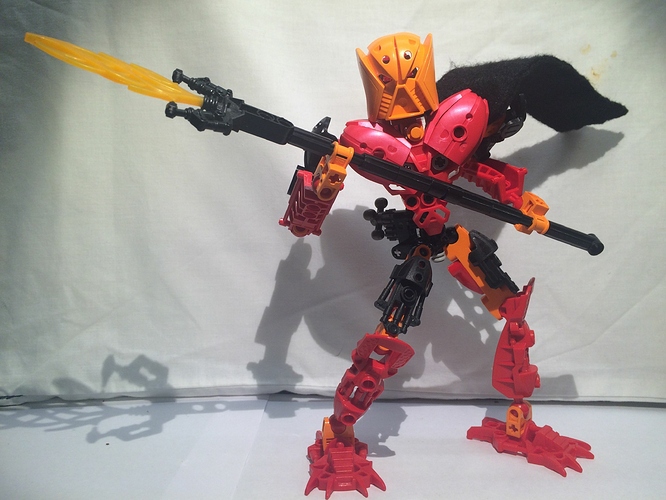 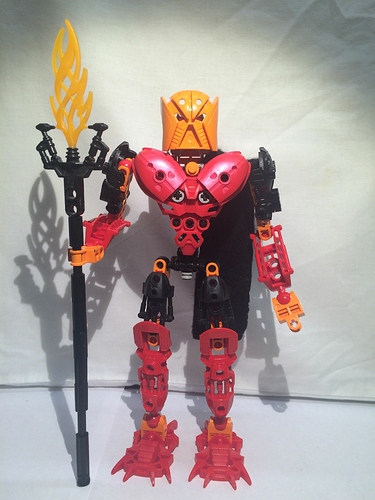 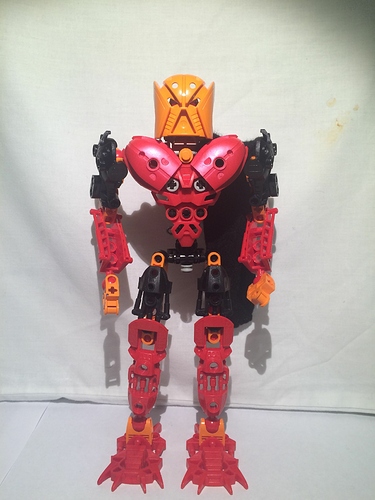 Kalama, for the most part, uses the regular Inika build, though some clear modifications were used to add to his uniqueness as a set. 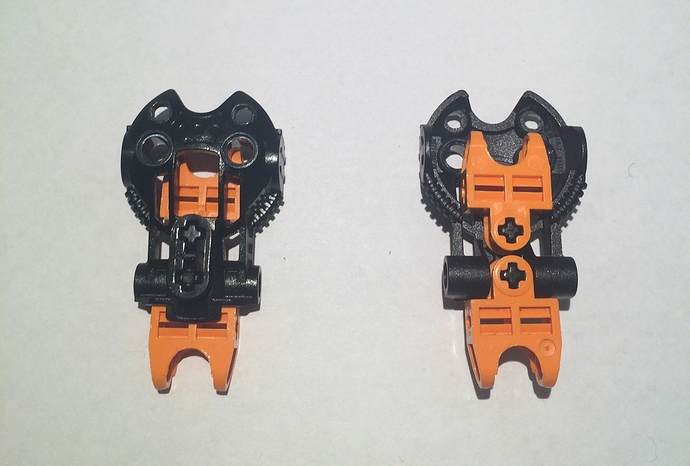 To avoid giving Kalama gorilla arms, I shortened the upper arms as shown. 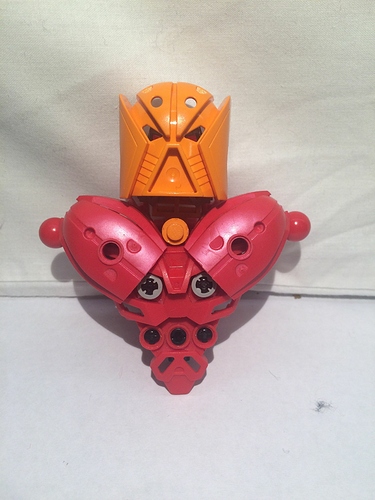 Though Kalama uses an Inika torso, the chest armour itself is custom-built from Metru Matoran armour and Rahkshi heads which, when assembled, makes the chest look ‘puffed up’ like those of guardsmen / sentinels. 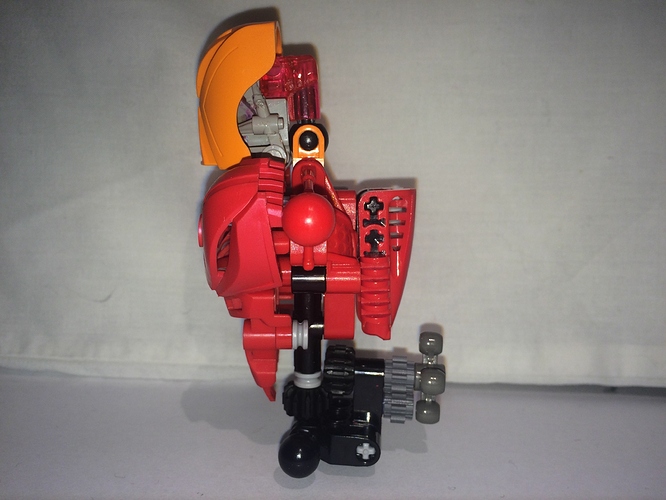 The lower half of the torso is built from a Vahki lower torso piece, and is where the function is integrated.
The technic block attached to the back extends the body such that the lower torso doesn’t appear to stick out as much. 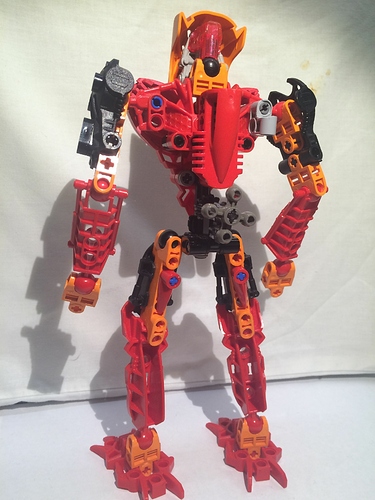 Bohrok eyes were added to back of the thighs to cover up the exposed space. Sadly, I ran out of black pins. 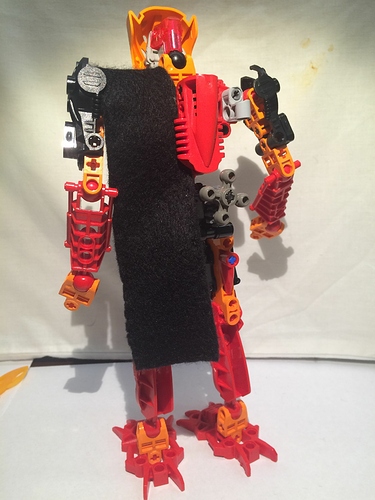 As a former member of the Ta-Koro guard, I thought it’d be a good idea to make it obvious that Kalama already has some experience in combat, which is why I gave him the cape (which is attached via the pin that holds the left Rahkshi head onto the torso).
Obviously, if this were a professional set, I’d have some fancy pattern sewn into it (for instance, the symbol for the principle of Courage).

Kalama carries a large flame staff that can be held in one or both hands. 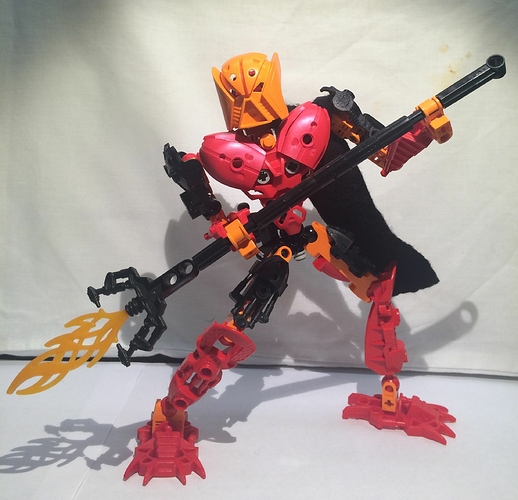 The two exposed axles along the staff’s length are used to slot Kalama’s hands through the weapon. 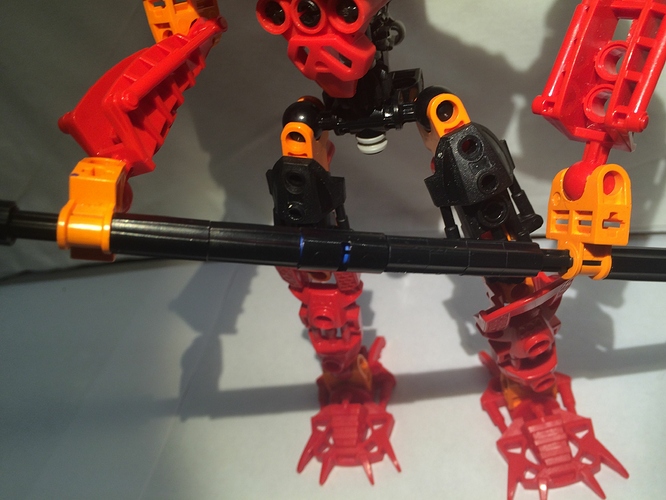 At the centre of the staff is a pin joiner round that allows rotation in the hands while using the weapon.

Storage of the staff is also possible: 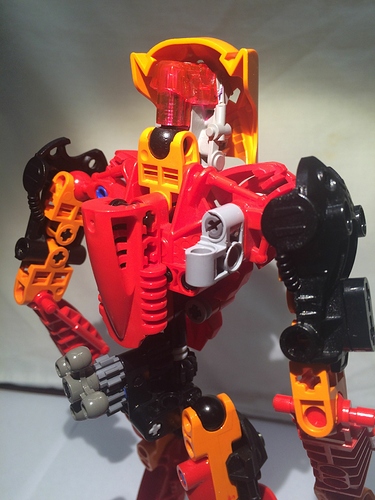 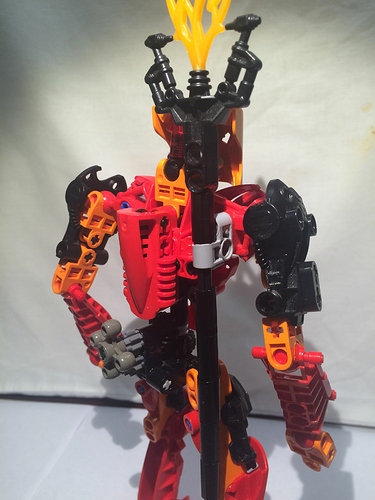 I would have used a black staff-holding piece instead if I had one. 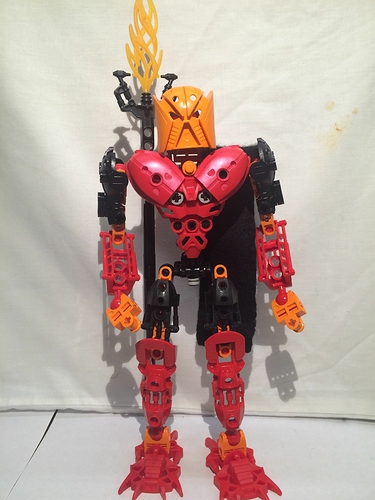 Unfortunately, the burner doesn’t have an off button. Careful, Kalama. 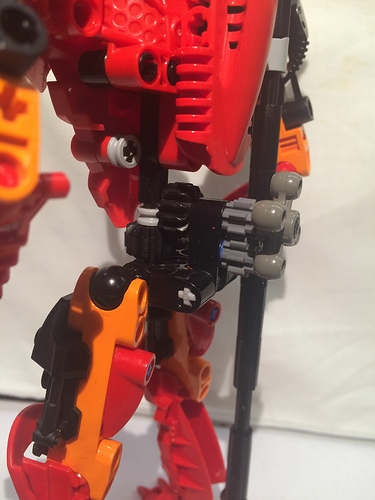 Kalama’s gear function causes rotation at the waist for attacks using his staff. 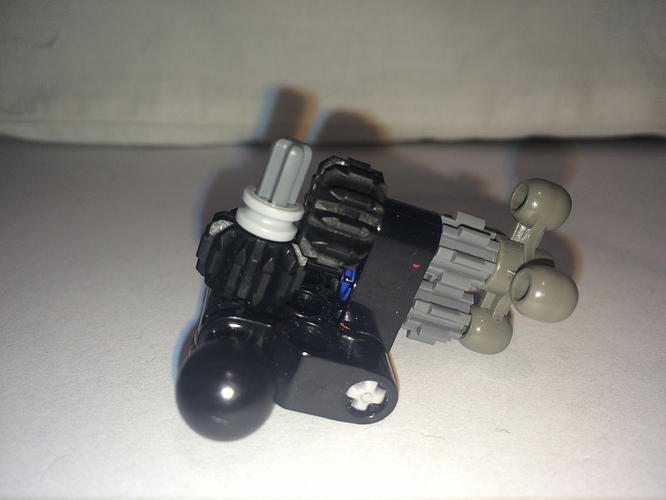 Surprisingly, the main gears and the two friction gears are enough to stop the waist from turning by itself. 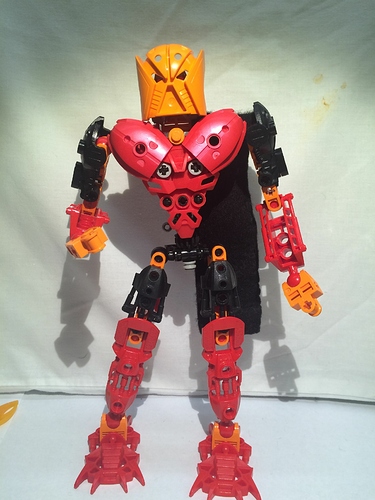 Though his mask has changed from black to orange, I thought it would be fitting for him to retain his original secondary colour. Whether I did a good job of balancing all three colours or not is up to you to decide. 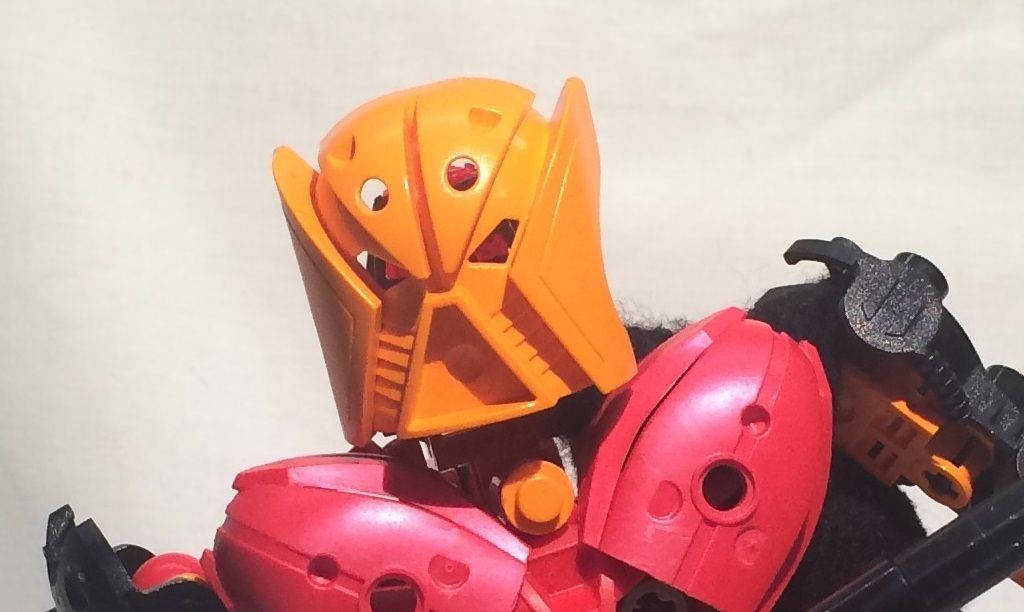 Similar justifications for the change in mask colour of Vhisola and Ehrye also apply to Kalama:

Following my completion of Kaj, I decided to create an entire Toa team using existing characters, taking great inspiration from the sets and stories of the 2001-2003 era of Bionicle.
All of my designs have a unique gear-based function, a creative build and an innovative colour scheme.
Kalama is the final Toa to be posted, however it’s not the end for the Toa Project just yet (see below).

Please leave comments and suggestions for improvement for Kalama and the other Toa. Once I’ve collected enough feedback for Kalama, I’ll address any criticisms and share the improved Toa together in a single post.

#Next Time: The Toa Valda 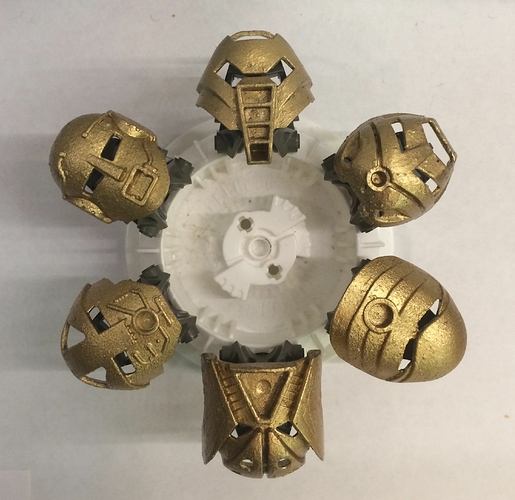 Your feedback has been collected and addressed for the other five Toa.
The final post for the Toa Project will feature all six Toa together with their improvements, plus more story details and a few extra rewards for followers of the project.
(Note that the arrival of this post will depend on how well-received Kalama is, as improvements will take time to be made.)

Also, if anyone has suggestions for a better name for the team, please let me know. My alternative was the ‘Toa Kura’, though I’d like to hear your opinion on which sounds better.

I like him, he looks very regal with the puffed out chest, all the armor, and that staff.

I like him, but why does he have breasts? Also, if this is on Spherus Magna, how about the toa spherus? Or toa Magna?

Hey, Tumaru and Hafu are on my toa team too! Sadly I haven’t gotten around to mocing any of them yet… I have neither the parts nor the money to spend on bricklink right now…

Great moc though! I’ll have to go check out the others.

Is that suppose to be MOC?

I didn’t make that association myself - I thought they were a bit high up to look like them.

‘Toa Magna’ was my original name, but it’s quite a popular name in the community. That and I just saw that someone on Deviantart did a Toa team called that, plus they also had a project called ‘The Toa Project’. I didn’t want to look like I’d copied them.

Wow, this is great! It may appear to be a simple Inika build, but to me that gear function brings this thing up beyond one! Great ingenuity!

He looks really nice, and the weapon has a nice paint job!

All in all, although he’s simple, he does it well!

The staff isn’t painted, by the way. The Vakama '05 weapon came in black in one of the system sets, I think.

that gear function is very clever

Ooh. Nice use of otherwise not so great looking parts, and nice function.

Just add some shin armor, and he’s pretty much ideal

I absolutely love this project and the outcome!

Got all the photography done for the review post. I’ll write it up tomorrow and hopefully get it done within a few days (if not tomorrow).