A quick example of the Voidal species, and how they differ by age/Voidal stabilization

As mentioned in the Void’s topic its ‘native species’, composed of Voidlings and Void Lords, are very… strange beings.

Voidlings are born through the full physical conversion to Void material/energy of the bodies of those sapient beings that end up with in it, and the subsequent breakage/alteration their mind goes through in it’s feralized state their lack of full Voidal connection brings them.

Void Lords on the other hand are brought about by their gradual stabilization to the Void’s energy until they have reached a state where they regain their mind, and can access their home planes own energy.

This process of adaptation is also a good way to get a limited grasp on the basic age of a member of the Voidling’s species. 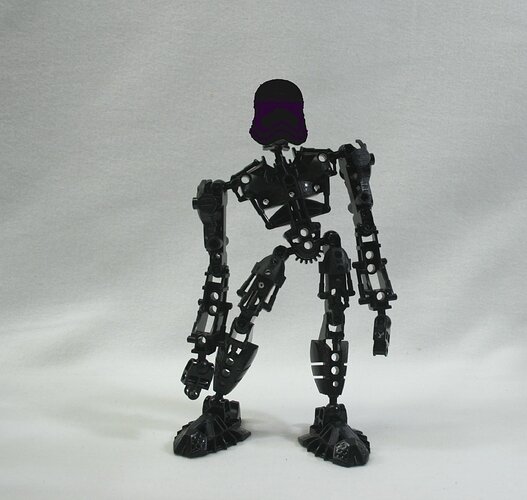 (And yes, that is just crappy colour-editing done on his helmet, haven’t had the time to paint it yet, but once I have I’ll upload an update.)

This is an example of a newer Voidling, one who was just recently converted, and thus has just began their adaption to the Void.

They still retain much of their old form, both in design, and proportion. They are barely stabilized in terms of both Voidal connection, form, and energy, and far from apdated enough to gain the status of a Void Lord. 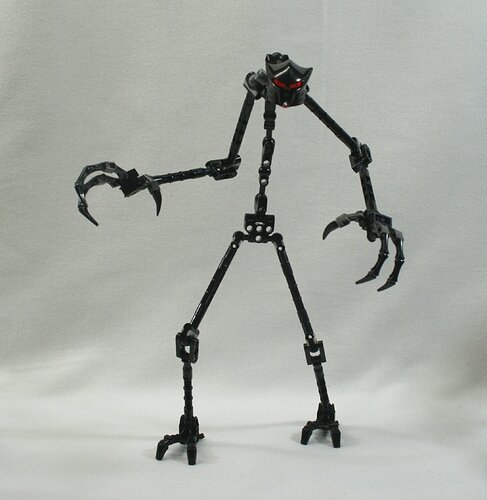 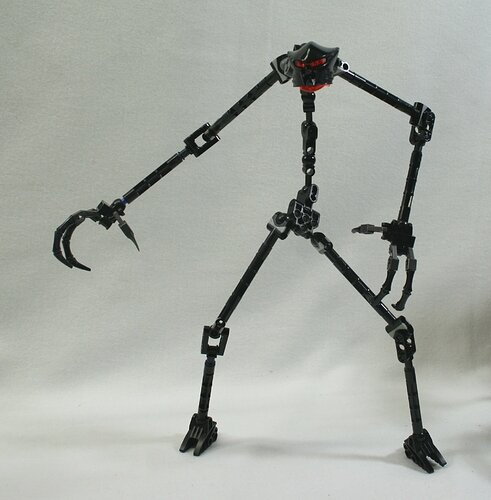 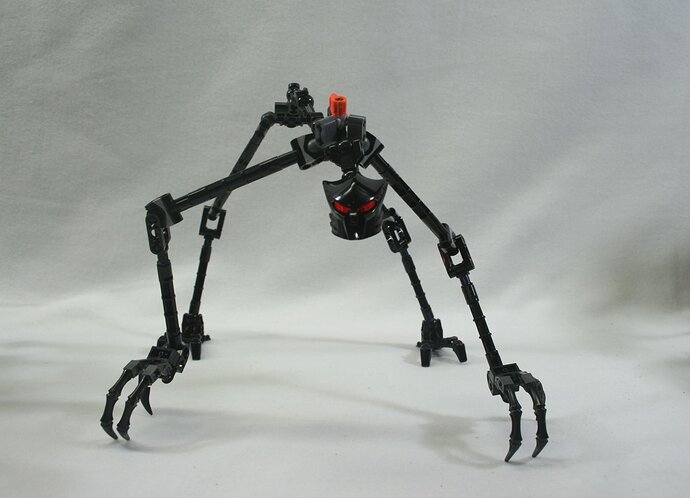 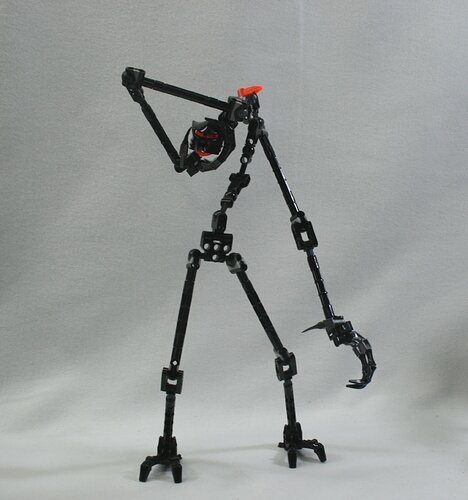 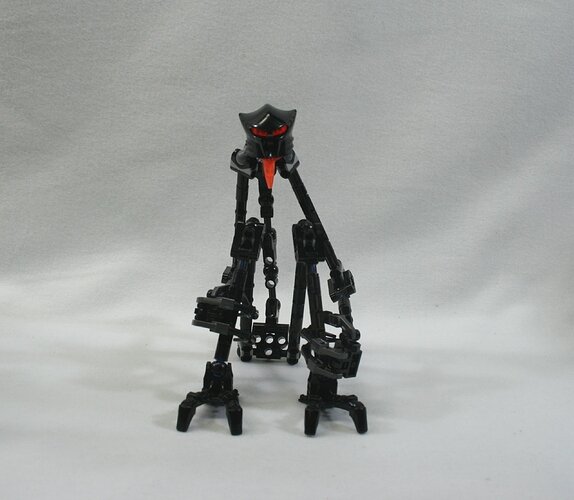 This on the other hand can be an example of either a young Void Lord, or a Voidling close to reaching said stage of development.

As has been mentioned many times the Void is an unnatural place, its inhabitants just as much so.

Twisted, misproportioned, practically a physical impossibility, both in shape and flexibility, large, and made to exude a feeling of ‘wrong’. These are all words that would describe what the Void would look like given physical, living form, but despite its lack of said form its inhabitants can more than fill that roll.

But do recall this is an example, older Voidlings, and Void Lord’s can differ from this to great degrees, and quite often due. So long as it carry’s the needed sensation of ‘this is wrong’ any form one can think of is a possible one for them.

As also mentioned this would only be considered a young Void Lord if it had reached said state. This is due to what its form still lacks. While perfectly adapted to the Void’s standards it is still greatly lacking in the areas of survival based necessities.

A form like this is far too exposed and weak, and as is known, a weak Void Lord is one who will quickly find themselves dead and devoured by another. They’ll also have less of the… ‘authority’ needed to keep such a large number of Voidlings as their armies are typically made of, and thus have a much smaller amount than most others of their ‘age’.

Also, quick thanks to DavoDoss and his unbelievably perfect timing on uploading his self-Moc from which this character’s head design came from.

Here’s a quick little height comparison of Bio and these two just to give an idea of what he’s typically dealing with multiple times on a daily (or as close to that as on can get with the Void’s sense of time) basis. 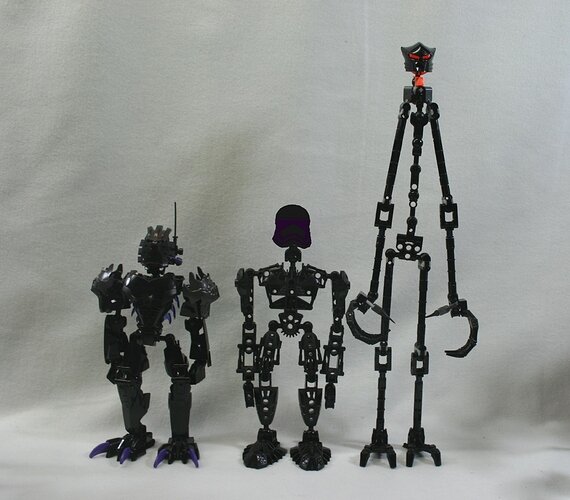 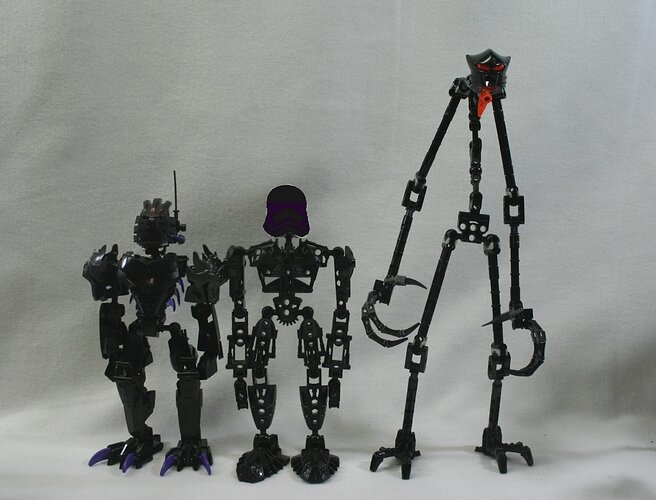 As you can see even with the lost height the typical Void beings posture causes, Bio is still outsized more times than not. And even more-oft outnumbered to boot.

Also, here, have this thing: 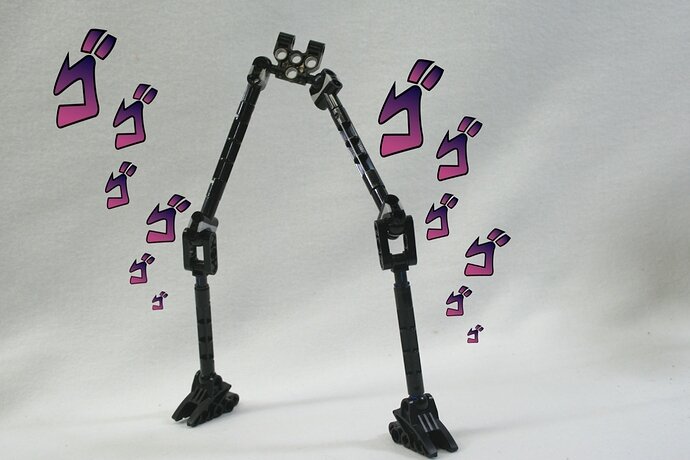 (I have no idea why I did this, nor why it instantly popped into my head when I first made these legs. All I know is that my mind found it such an ‘intriguing’ idea it wouldn’t stop pestering me about it until I did it.)

Hoo-hoo, ja. Love that guy, he’s so bloody lanky and freaky… also frighteningly well balanced for a Moc of his proportions…

The thin gentleman looks the best, and I think really captures the feel you were going for.

I love Tall, Dark, and Skinny. He looks really cool.

Ey, thanks mate, glad to hear I got him down right! But yeah, he’s the one I really put effort into. Just had the idea pop into my head, and to myself I couldn’t help but see it as a perfect one to show an example of what I talked about when explaining the Void and its freakiness.

@meepinater Hehe, ja, he’s a fun one. One of the lankiest Moc’s I’ve built, and he stands amongst the tallest of them too… Also one of the most balanced of them somehow.

Yeah, the weird ones tend to balance better.