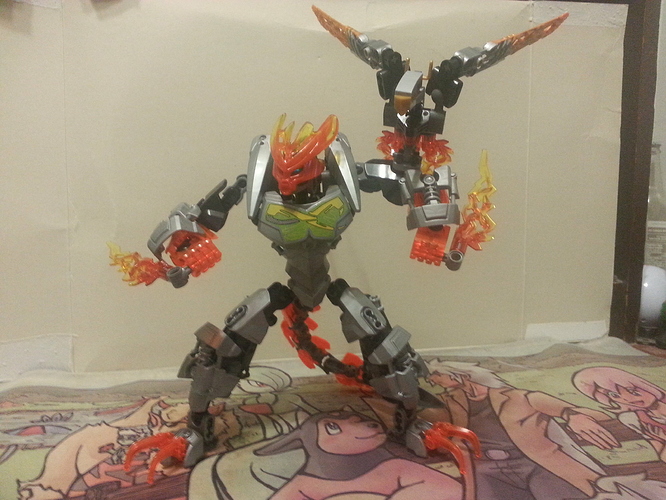 HI guys, Silver August here! I heard about this place and decided I should share this MOC since it’s pretty important to me but FIRST some back story on the character!

Agnite’s name is a play on Ag, the symbol for silver in the periodic table and “ignite” because this character’s biggest trait is his speed and using his power of fire to allow him to travel with exceptional agility and nimbleness.

Fenke’s name is derives from Fenghuang, the Chinese pheonix and well… Falke, which already used Falcon + ke, and since Fenke is basically a fire version of Falke, I felt keeping the name pattern could help imply they’re both of a er “familiar” species.

For awhile I debated what mask to go with but I went with the Protector mask simply because the design best emphasized speed, plus in story one could imagine that this is a Protector who went on his own journey after the Toa left to keep the elements in check.

However the molten land was harsh and untamed, forcing him to adapt in order to survive. He would forge silver armor that would allow him to endure the intense heat but also countless attacks from various fire and lava beasts. In doing so, he himself adapted and dawned more animal like traits. This allowed him to stand on even ground with the fire based creatures and eventually “tame” them, Thus he would go on to be a Tamer of Fire.

His first and most loyal companion is this Fenke, a “Familiar”, a spirit of fire that has taken the physical form of a Falke like creature and helps extend Agnite’s ability to communicate with other fire elemental creatures.

Agnite’s main powers come from the fire that ignites from his burning fists, between these and the thrusters on his back, Agnite is able to propel himself at incredible speeds and deliver hard hitting fire punches

However if Melee combat is out of the question, he has his other weapons, hip mounted boomerangs that he can discharge intense heat from in order to turn a thrown boomerang into razor sharp fire disc.

Build wise, this MOC is special to me because when I discovered Bionicle was back and I picked up a Master Tahu, Uniter Kopaka and Umarak the Hunter, I thought to myself…I wanna build my own character. So I ended up buying more and more sets in an attempt to get as many silver pieces as possible and ended up keeping the fire theme because it looked sharp along side silver. The tail was an accident, it just looked cool to me so I kept it, But if I have 1 regret its the pieces I’m using to have the flames come out his fists…I dun think that piece comes in red so I can’t fake it and I dunno if there’s a way to get around it otherwise. I’m open to idea there though!

As for Fenke, as I was buying all the pieces to build a Falke, I thought to myself I might want more then one of these because it seems super easy to make other elemental versions of the basic build sooo…I ordered extra to make a 2nd…and a 3rd and attached a bunch of fire pieces to give it a big bushy back tail and…I love the end result!

I dunno if this is overly long winded but I just wanted to share as much detail as I could to try and give context for this guy’s design. I dunno if the build can be considered simple, but I kind of wanted to go with the mindset of this being able to fit in along side the retail released sets and since I’ve only gotten back into lego, I was limited to the pieces that came from these very sets.

…The green print on the chest might look weird too…but its the only silver chest piece I know to exist that isn’t an even greater clashing color >.<

Anyways… tell me whatcha guys think! I also have a Tamer of ice I could show off and soon a Tamer of Earth (who also has a Familiar of his own). 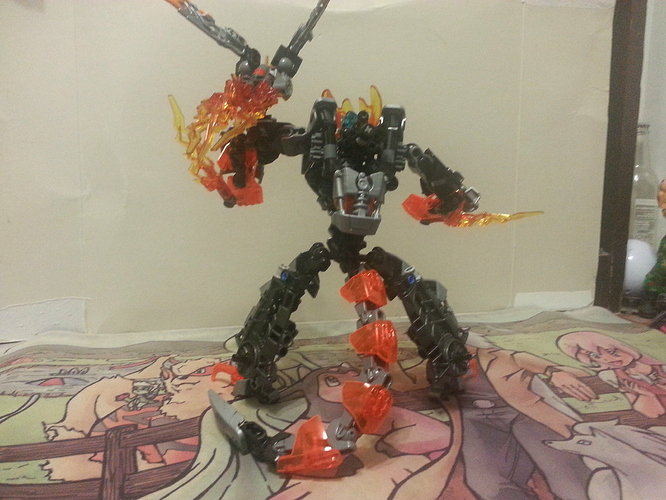 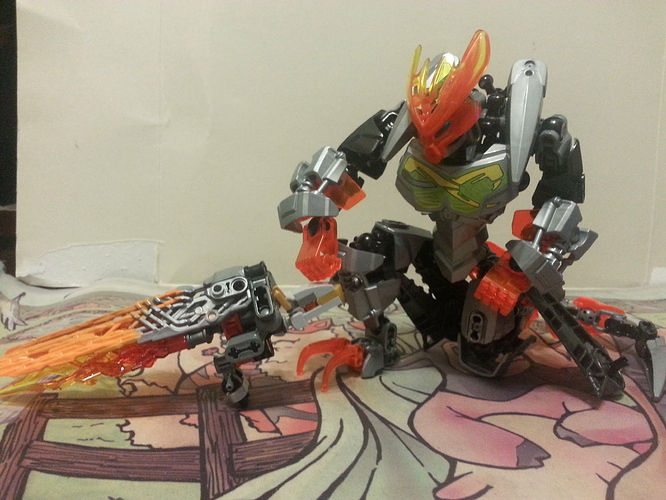 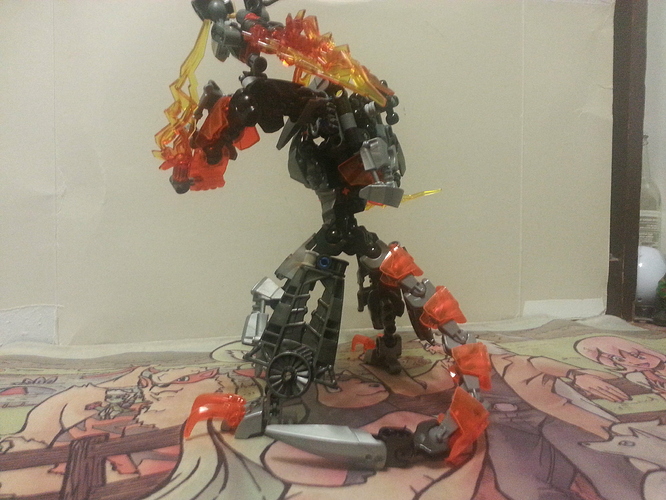 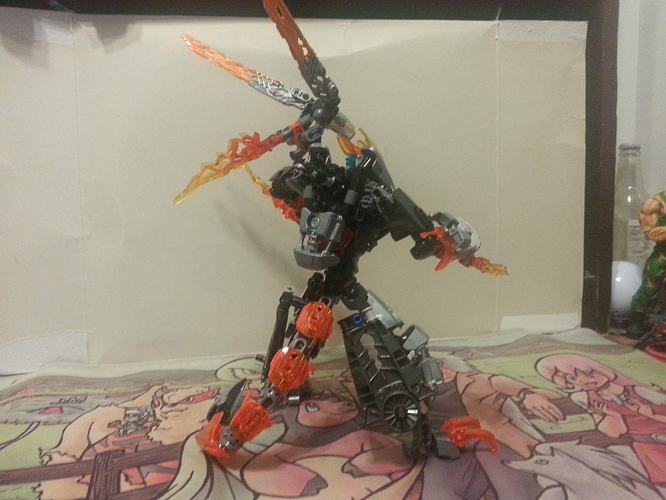 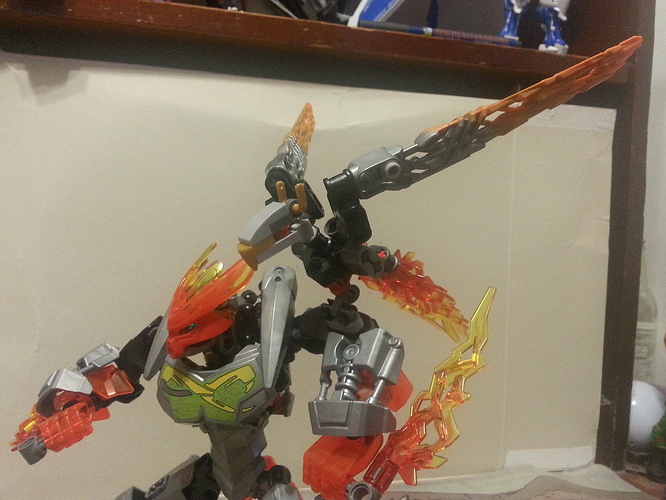 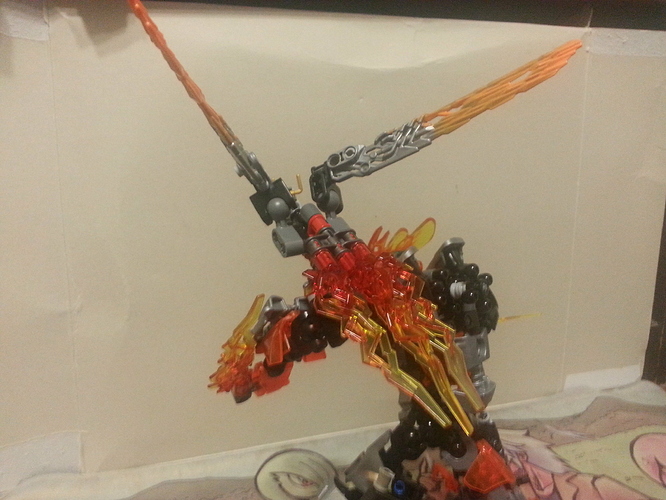 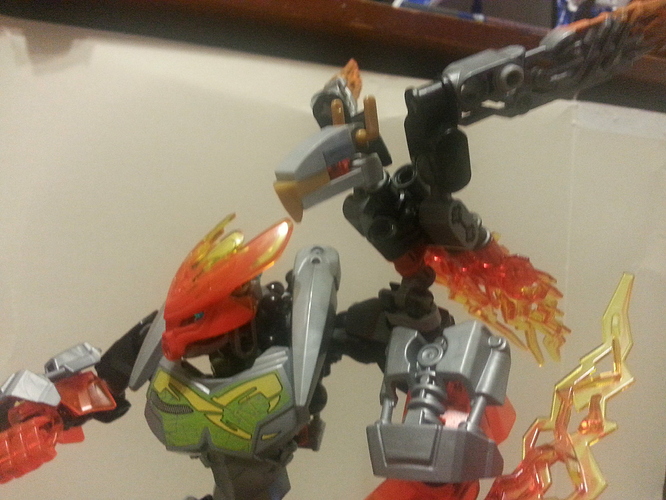 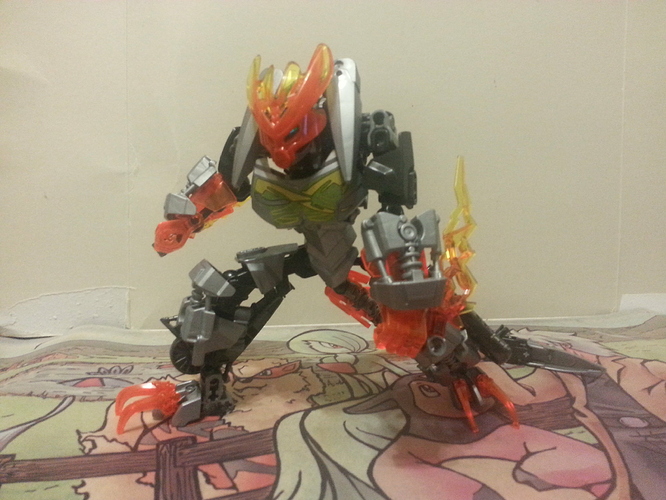 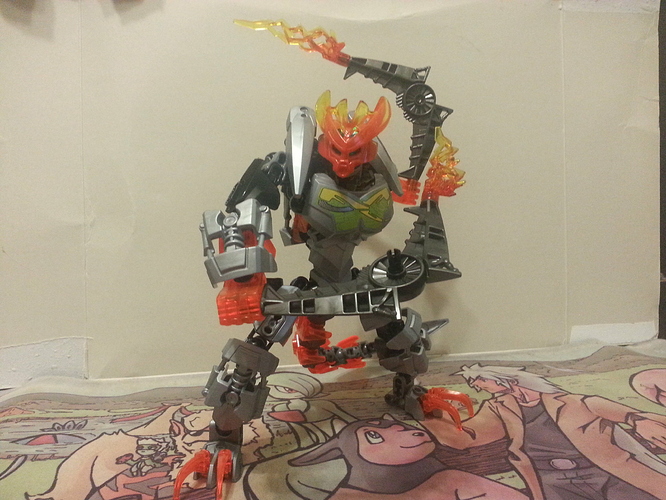 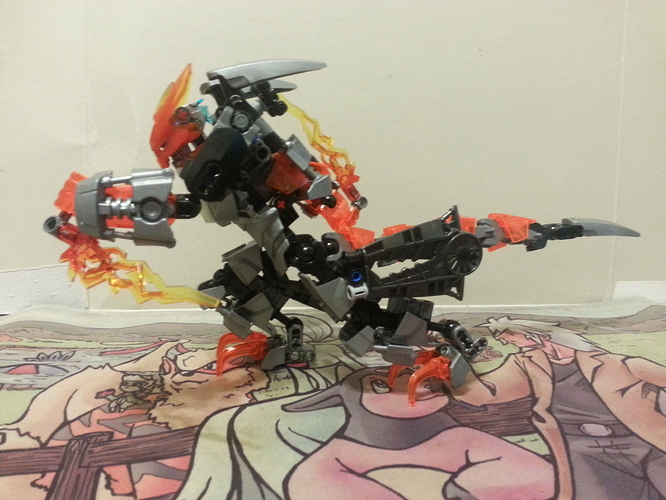 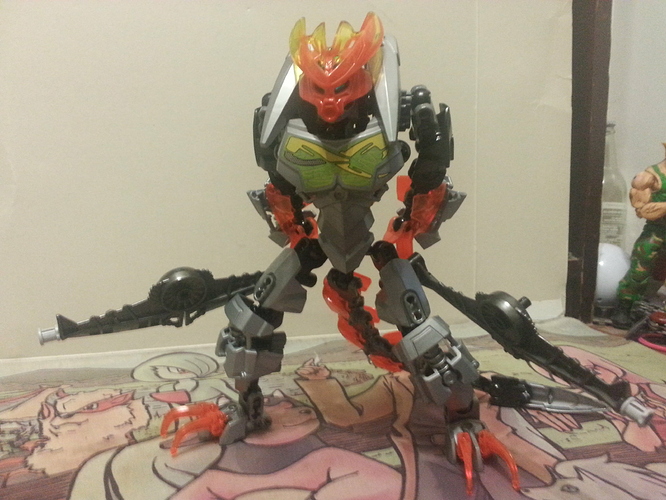 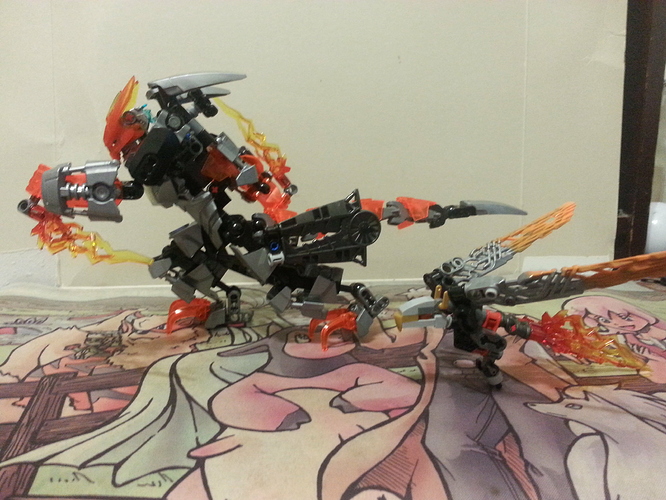 Sort out the glaring chest plate issue and this’ll be a pretty neat moc.

Also try to put all your pictures in one post

Well, the body just looks 2015 Lewa’s torso just with different body armor and the bird is just like Agil with different wings, tail and red eyes
The arms and legs are very simple but it doesn’t look tooo bad.
The thing that bugs me the MOST is how much that chest decal stands out.

T-T see it makes me wish they released a silver chest with a red print, or …something fire related because any other silver chest has blues or are out right evil looking lol

I have to agree, but they still look good, despite these things. I like how Tenke looks, especially in contrast to Agil.

Pretty solid build you’ve got here! I myself don’t at all mind set revamps/recolours (I actually enjoy doing them myself). However, it’s best if you state it outright (ie: this MOC mainly uses Lewa 2015’s build with my own personal modifications). Posting a disclaimer like that will usually help enhance people’s perception of the MOC itself.

Other folks have already outlined the colour issues, so I won’t bother going into detail about them. Have you tried getting rid of the printing with Brasso or something similar?

Finally, my biggest critique of this MOC would be the background you’ve used to photograph it against. The art used for the flooring, while cool-looking, is extremely distracting. When presenting a MOC online you want all the attention to be on the creation itself (not the background elements). I recommend finding some white sheets or large cardstock to form a featureless background. Or if you really feel serious about posting more MOCs online, build a lightbox.

Finally, I’d like to make a suggestion when it comes to pictures: don’t publish too many similar pics in a topic. If you look at the most popular MOCs on the Boards, you’ll notice that they almost all not only have clean backgrounds with good lighting, they mostly only contain a few well-framed shots of the model. Yes, you want to show your MOC off from several angles, but don’t want to overwhelm the viewer. I recommend sharing a few well-composited shots of the MOC in dynamic poses and a few pictures of the most interesting details. When it comes to sharing LEGO creations online, less is often more.

To be honest, when it came to the build…I didn’t actually assemble Lewa, I literally got him for the abundance of silver pieces and I liked the angled thing going on with the shoulders…and as you can see, the idea of using them as shoulder mounted boosters.Any further modification I wanna make are either not possible without compromising some of the functions or I simply don’t have the parts needed to pull it off (let alone without creating back weight issues).

As for the chest plate… I mean I have considered flat plates without any sort of tampo on them, but I look at the other Toa of the Gen 2 era and it would seem out of place to me if it DIDN’T have some kinda marking splayed across his chest, its just this is the only one that came on a flat silver chest and black would clash with the idea of this being specifically an armor suit and would also make black become a dominate color as oppose to being a sub-color. The moment they release a flat silver chest piece with red/orange tampoed on top, I’ll have my replacement, but till then I just stick with what’s available at retail.

As for the flooring… I suppose I coulda just flipped the mat upside down, I’ll keep that in mind if/when I post the Tamers of Ice and Earth

And I’ll try to be more mindful of pictures in the future, its just with this one I did put in a bunch of features that I figure need to be seen in case no one reads the background story for the character lol.

Fun act originally this was…mostly a modification of Pohatu, even had the mask before I started giving him fire elemental traits, This is where a lot of the Speed traits came from and would stay as I gave him beast legs, a tail and just added to further the idea of speed. Technically speaking he also has a “cool down” mode where all the orange goes back to silver… but of all the thing I’ve been critiqued for I was actually worried about if Parts Swapping (a carry over from being a transformers fan lol) would be considered taboo. But yeah…I guess I just at this point stopped seeing it as Lewa heavily modified and just an amalgamation of sets to make my own personal guy.

To be honest, when it came to the build…I didn’t actually assemble Lewa, I literally got him for the abundance of silver pieces and I liked the angled thing going on with the shoulders…and as you can see, the idea of using them as shoulder mounted boosters.

Huh. Did you intentionally base him off of Lewa’s design or was it just an accident?

the idea of using them as shoulder mounted boosters.

Oh, I just saw them as fins or something like that.

Welcome to a LEGO Designer’s world.

The moment they release a flat silver chest piece with red/orange tampoed on top, I’ll have my replacement, but till then I just stick with what’s available at retail.

I see what you mean. Sometimes you just can’t win…

When it came to Lewa, most I did see was how they did the fin things in the instructions, after that I just changed/added/fiddled with different ideas to make the uniformed look I settled on,

And regarding the fins…yeaaah for now they’re more fins with imagination filling in for the fire boosting effect alah more then a handful of mecha anime. I’d like to find a way to make flames burst out back, but I need figure out how to add a hidden open axle to the whole assembly so it can flip out and thus allow flame pieces to be attached.

i like this alot, this looks good but the lewa 2015 chest disturbs me

Not much I can say that others haven’t.
I’m more interested in that mat that matches your profile picture, did you make those?

Oh! Welcome to the boards mate!

Your first MOC on the site? Well, you’ve left a good impression and I await those other two MOCs! 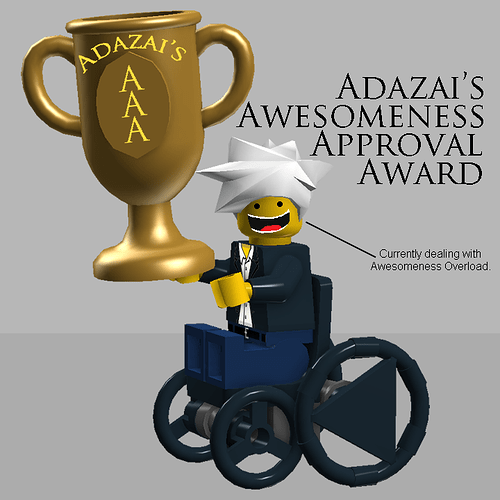 AwesomeJoel27 its a mat a friend made for my birthday many moons back of my character in my Pokemon webcomic…thingy well…also The Silver League website itself as Silver August…buuuuut yah! The Sprite I made myself though!

And Adazai, thank you! truth be told my Tamer of Ice doesn’t have an animal companion yet…and Earth is awaiting parts to come in the mail but thank you still!

Use @Adazai or @ to notify users that you aren’t directly replying to or quoting. also you might want to use the qoute feature (unless you’re on mobile) to get people to understand what you’re saying more clearly, not nessasary but useful.

Use @Adazai or @ to notify users that you aren’t directly replying to or quoting. also you might want to use the qoute feature (unless you’re on mobile) to get people to understand what you’re saying more clearly, not nessasary but useful.

You can tell I’m not used to Forums >.< lol I literally saw the MOC Spotlight vids and was encouraged by some friends to show off my builds since I developed a sudden Gen 2 Bionicle obsession like…6 months before the Beast wave came out lol