Ahkmou, The Toa of 'Graveyard'

I built the MOC of my version of “Toa Ahkmou”, a Toa who never exsit in canon or Main universe!
I hope you like this! 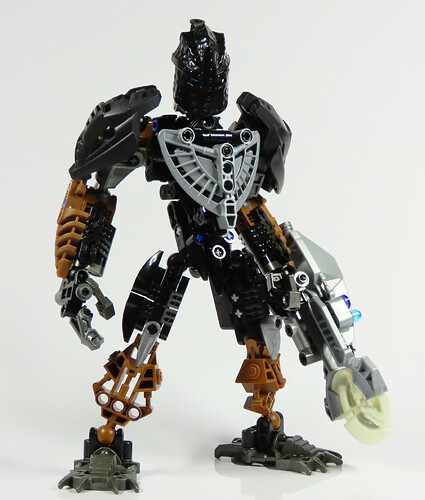 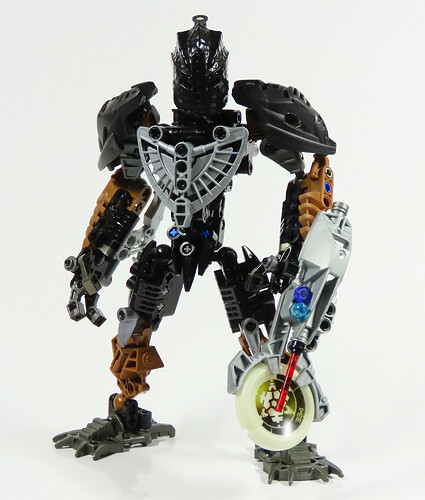 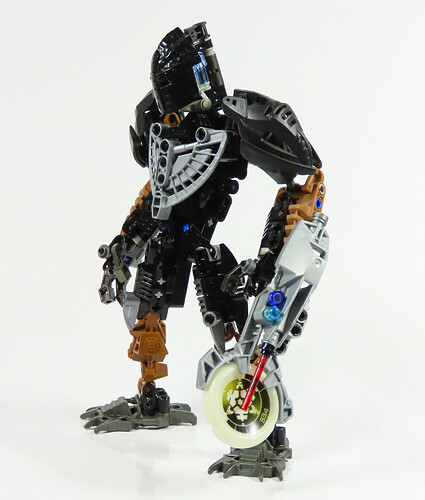 He is Ahkmou who became Toa of Shadow partially at a certain Alternative Universe.
He still has Stone’s Elemental powers, but it’s not refilled, so he ends up with a full Shadow Toa eventually.
Nevertheless, he prioritizes his own interests and does not hesitate to use Stone’s Power.

He had excellent engraving techniques, which are now used for tombstones he builds for the purpose of mocking his victims.
As he approached the perfect Toa of Shadow day by day, he eventually became known by people as the "Toa of Graveyard". 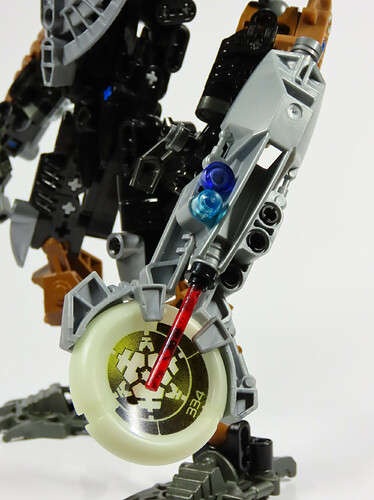 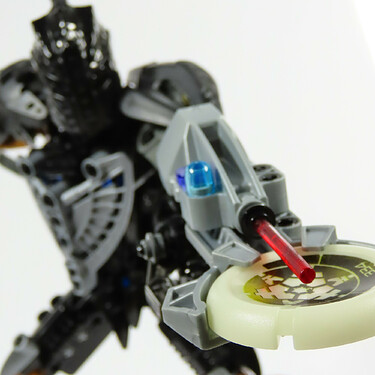 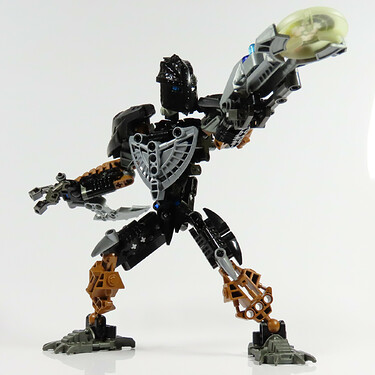 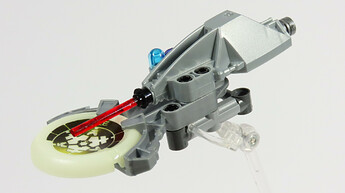 He uses the Cusmized Disk Launcher that he stole from an arsenal as his main Toa Tool.
Despite the realistic choices like Vakama in the past, he makes a malicious use of its usefulness by “directly putting various effects of Kanoka disks to the other party.”

his battle style looks like the Rahi Doom Viper’s poison and its attack range, so some people calls him as “The Viper”, from like Turaga Vakama’s saying once. 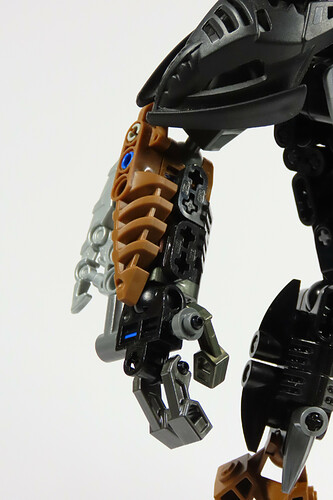 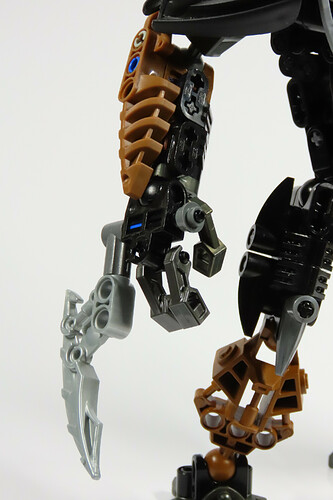 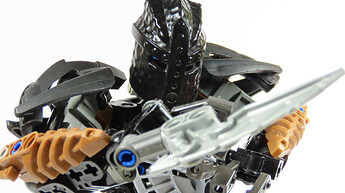 As a sub Tool, he carries a wrist blade on his right arm.
For him, whose basic combat style is to hide in the darkness around him and shoot the Disk, this weapon is only for self-defense when a close quarters battle is set up. 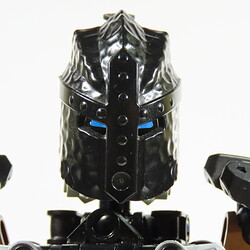 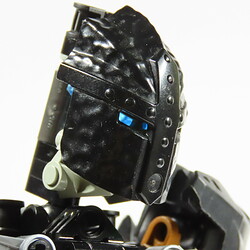 He wears the Great Kanohi Rau, which has been altered by the shadow leech.
It’s a big mistake that this doesn’t help in combat-as Nokama once did, he translates and listens to the soliloquy of the surrounding Rahi.
And many of them hide a lot of information that his enemies said, believing that “no one else was listening.”
. 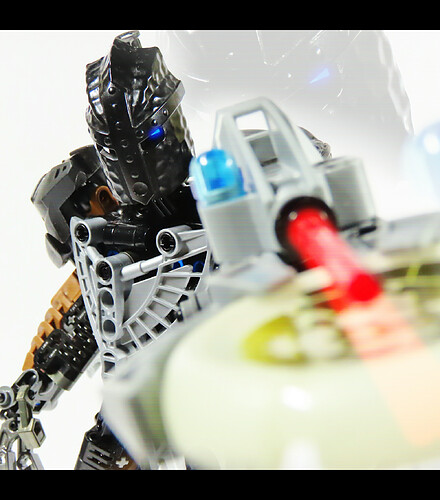 BUKKEY! YOU HAVE DONE IT AGAIN! AWSOME WORK!

I like the Kanoka weapon. Not often we see those used in mocs.

I love Disk launchers, it’s very unique tool of BIONICLE!
and I think, actually it’s a strong weapon because that effectively means that you have the freedom to choose and use 8 limited Kanohi powers as Kanoka’s 8 powers.
If you recall Rahi Nui, you can see how threatening it was!

I really like your concept of Ahkmou as a warped Toa of Shadow, great job as usual!

The mask you used kind of reminds me of the rau Ankmou uses in the Nova Orbis comic. It was probably unintentional but I like that detail none the less.

Great work as usual, I did not know it was one of your Mocs as there was no Ver.Bu in the title! I like the thought put into his fighting style and the mask fits well. The only improvements I could see is changing the blue pins but I am sure you already know that.

Initially, I tried to make a completely dark Toa, but I thought it would be interesting to contrast it with Takanuva, so I did it this way.

In my imagination, he eventually fights Takanuva-a battle between Takanuva, who has returned to Toa of perfect light, and Ahkmou, who has fallen into Toa of complete darkness.
And maybe they would say-

“We’ve come a long way from that day, Old Friend?”
“I won’t stop you calling me an old friend. Honestly, I thought you was essentially a good man and wanted to be friends somehow … but It’s the end now. You walked away with shadows, with your own will.” 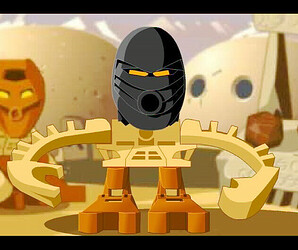 Sorry I don’t know his comics, but it was good to there is person who choose this mask as “dark-Rau”!

I’m glad to someone using my MOC structure! Please feel free to use!

I’m glad your comments! I adopted the blue pin because adjusted with his eye color and its strong holding power!

But if there were a black, strong-holding pin, I would definitely have adopted it, and I hope LEGO will release it.

At first, I imagined Toa Nuva as “an image of Toa in Ahkmou”,
He is Matoran, who remembers Metru Nui, and at the same time remembers when Vakama and his friends were Toa.
So I thought it was Metru rather than Mata that was “memorable” for him.(reson for his shoulder structure)
Moreover, he hates Vakama and his friends Toa Metru (due to misunderstandings and his own malice), so
He believes he was slightly influenced by Hordika, who was their temporary terrible appearance when he became Toa (reason for his chest armor).

Like it? I love it! Every part of this build has had so much thought put into it. As always your builds are fantastic 10/10 keep up the great work!

what pieces you use to connect his thumb? 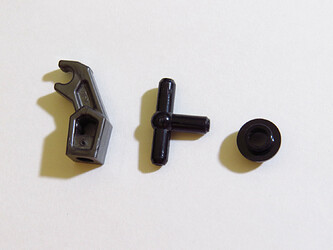 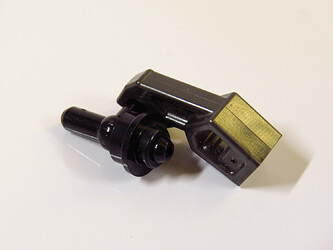 I didn’t know Karzon’s mask exited in pure black. Or is that painted? If not, which set did it come from?

It works well in the role of mutated Rau.
I also like the morbid irony of his carver skills.

I didn’t paint this, and there is no exsit black piece.
This one is LEGO’s, and color was black and copper.
but I bought this over 10 years ago, and almost didn’t use, so it turns almost pure black…

But discolored parts are “No-custom piece” in technicaly, and sometimes it very useful with no painting.

The kraahkans look very nice as shoulders, and the KKII helmet works rather well for Ahkmou. Also enjoy how you kept the brown to reference back to the matoran versions.

Also, the reason of I chose the disc launcher as his main tool is he saw its practical like Vakama, but
Whereas Vakama’s mind is “a flexible idea that is not bound by common sense as Toa”,
Ahkmou is “doesn’t proud of being Toa, and only recognize it as a useful ability and position.”
(Of course, it’s a another reason that I designed him for making you feel that remnant of his Matoran form, too)

That mask looks like a medieval knight’s helmet! Nice!

Huh, I did not know that was possible… I have Karzon from when he was originally released and the mask does not show any signs of discoloration.

That mask looks like a medieval knight’s helmet! Nice!

That’s because it is

It’s possible that my storage environment was simply not good …

In any case, I only have this one piece and have left it for years with no paint due to the connection structure that is difficult for kanohi to use.

ADD 1:
I checked BL piece list, but there are no pure black one… I don’t know why I have this. Honestly, I don’t remember what the set includes this. but I think it was pure set of LEGO.
(If I hadn’t mistake, maybe it was #8822 " Gargoyle Bridge".)

ADD 2:
I was curious about the origin of this piece myself, so I took a closer look at it again.
And I was able to confirm that there was a small amount of copper color has left on the inside of the mask, where it would be hardest to damage. 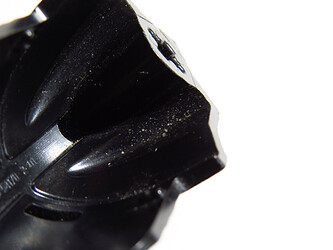 I figured it was probably just color or painting loss by from being in a terrible environment for so many years!

(If so, it would be my responsibility to put the piece, which was originally painted in copper mottle, in an environment that would turn completely black…

I like! The Kraahkan mounted on each shoulder is a nice touch.