After the fall of the Matoran Universe, Ahkmou’s first priority was to hide, something that became rather difficult once he was transformed into a seven-foot tall Toa. 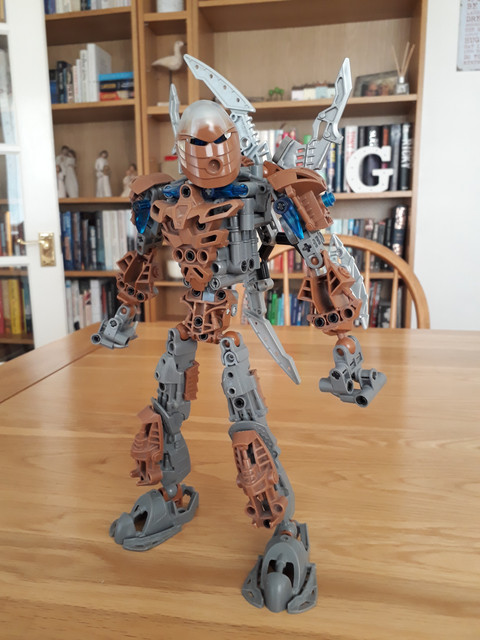 With two lifetimes’ worth of bad decisions behind him, and large amounts of angst associated with that, Ahkmou feels the urge to try and live up to his new stature rather than squander it.

Ahkmou possesses the full range of power for a Toa of Stone, but lacks much control in a fight, preferring to simply hurl large amounts of rock at his foes.

In non-combat situations, however, he displays a surprising level of finesse, capable of shaping sculptures from chunks of stone purely through his control over the material, and creating gemstones similar to the ones that line his chest and shoulders. 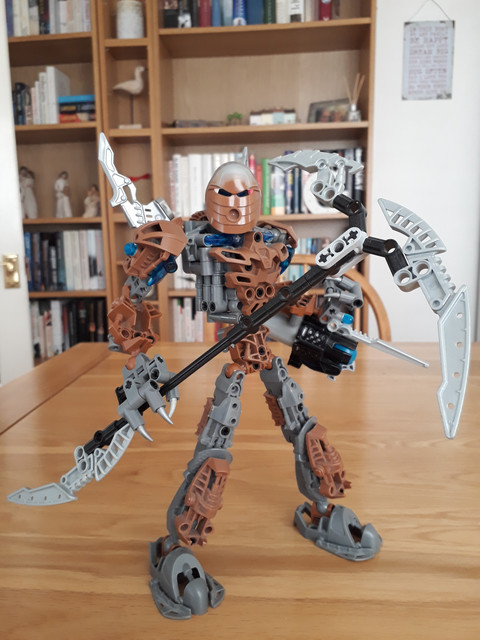 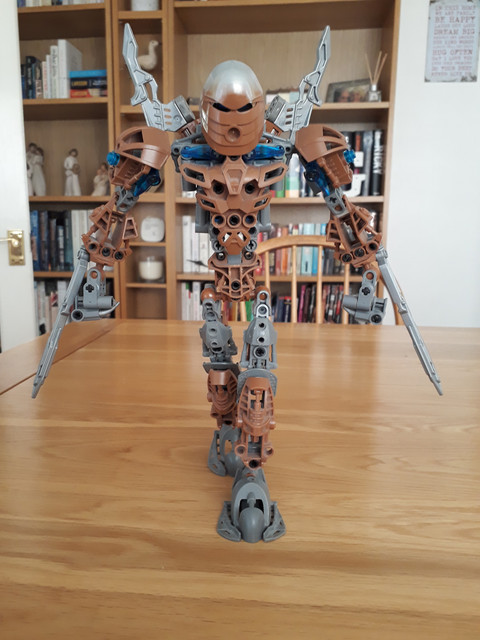 Due to his lack of control over his abilities, Ahkmou prefers the use of his weapons, primarily a massive, albeit collapsible scythe, twin arm-mounted obsidian rending blades, a pair of knives typically mounted behind his shoulders, and a Midak blaster that he acquired for a specific purpose, along with his significant physical strength.

However, arguably his best weapon is his silver tongue. Still somewhat lacking in the “bravery” department, Ahkmou prefers to avoid conflict by persuading, selling, tricking, intimidating, and just outright lying his mask off. 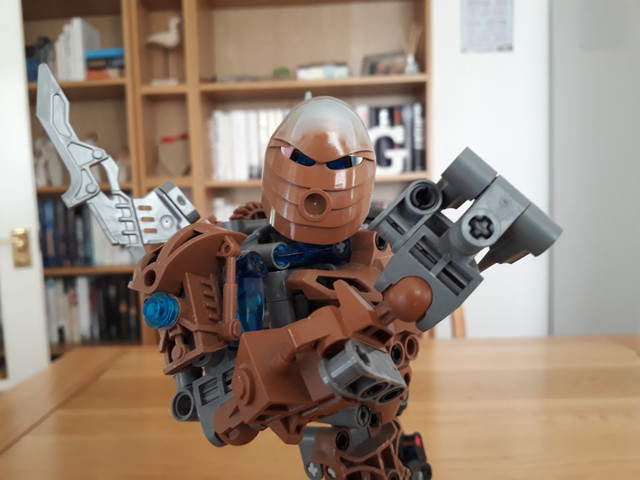 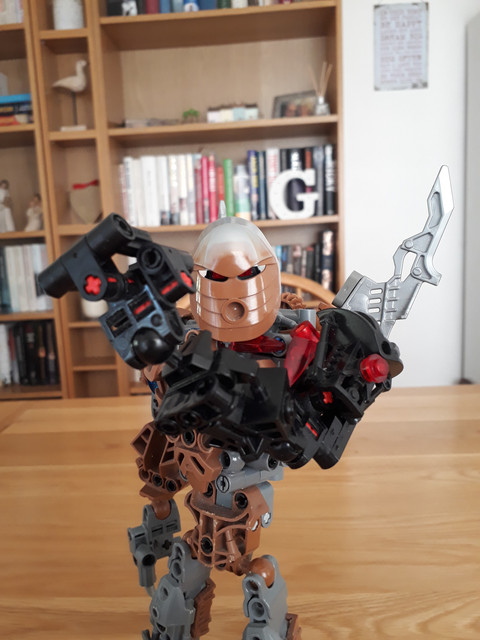 However, after learning that the Makuta may not be as extinct as he thought, he took drastic steps to ensure that there would be no repeat performances. 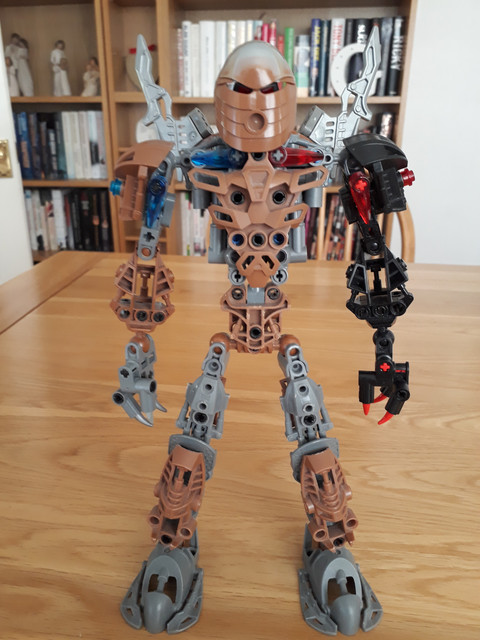 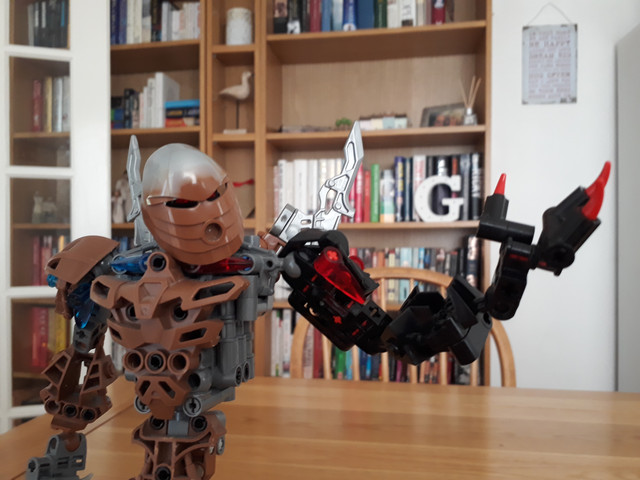 Ahkmou intentionally subjected himself to a partial light drain, granting him a modicum of power over elemental Shadow, with the intention of making himself able to absorb elemental attacks from the Makuta and their servants. It was a partial success, though the process itself is extremely painful. 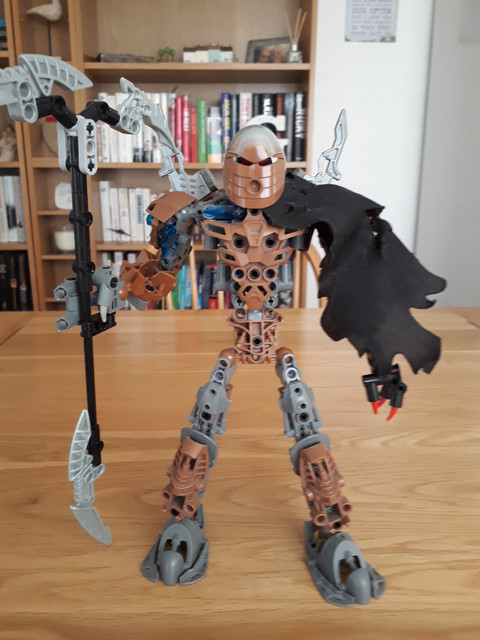 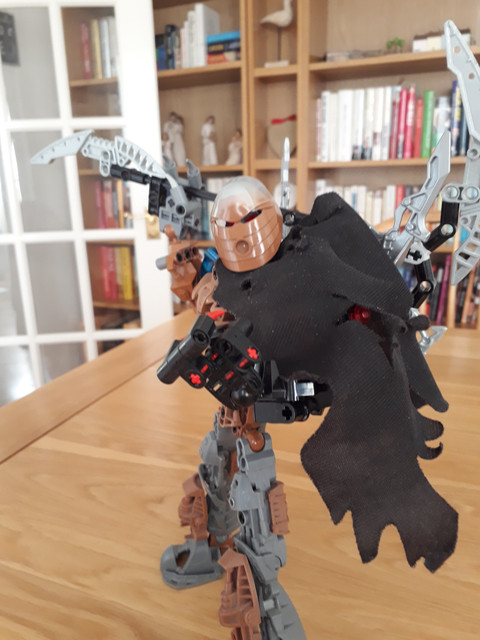 Owing to the menacing appearance of his alterations, Ahkmou opts to cover his Shadow arm with a cloak. 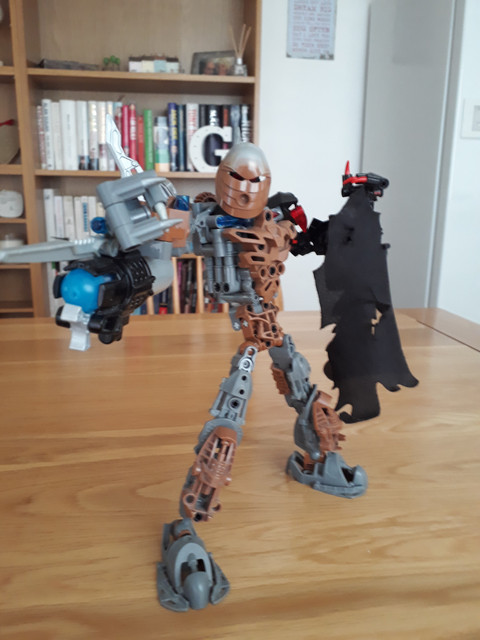 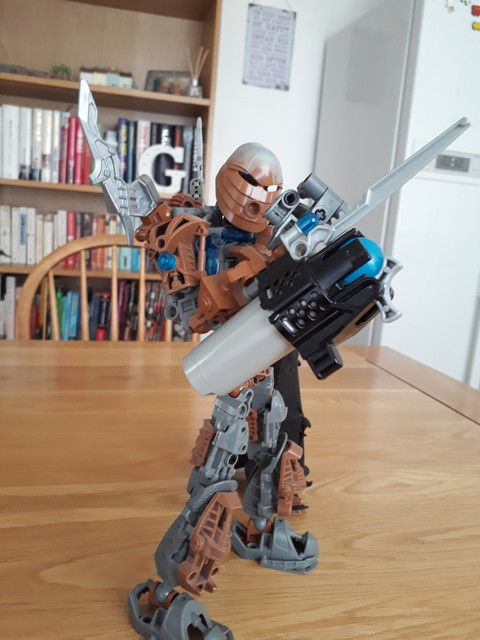 This is, of course, the previously-mentioned specific purpose for the Midak blaster. 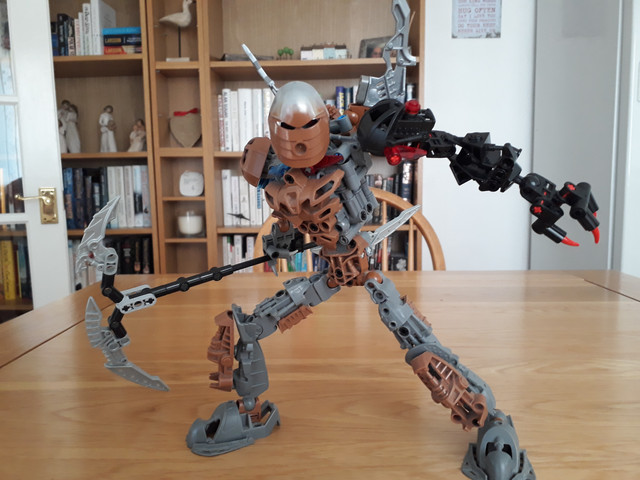 "I’m a Toa by accident, a trader by profession."

Very nice toa ahkmou. Not enough of those kinda MOCs.

Thanks. I was primarily inspired by Nova Orbis, and did my own take on the general idea.

Jokes aside this is very well done. I love the replaceable arm and cloak. Very nice additions.

Very cool build, I like the torso and leg design, very cool, the weapons are fantastic and the dark arm is a really cool lore tie in, overall great job!

Great name. Great build. The torso and hands in particular are really wowsome.

Thanks. I use this hand design quite a lot, so I’m glad it works.

Wow, that torso is something else! I really like the concept and how you used the same mask and chestpiece from the metru ahkmou, really makes him look like an evolution of the character!