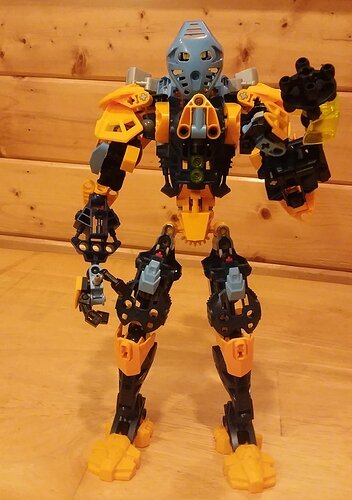 Aiden was the son of a warrior chief of a small army called the Seraphs. The Seraphs were well known for their unique tactics and armor systems. They would mount hoverpacks to their exosuits and fly above their opponents, pounding the battlefield with Elemental Energy cannons. What’s more, many of the Seraphs, including Aiden, were Toa of Earth, meaning that they were able to recharge their suits, hoverpacks, and cannons simply by landing, which they could execute concussively to clear space around them. 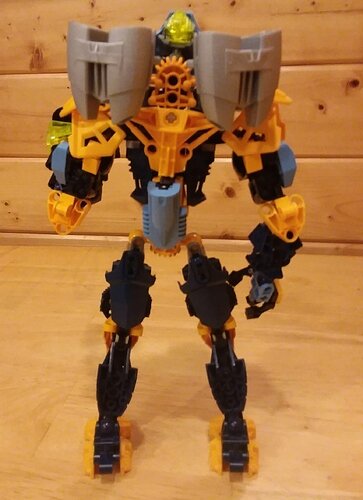 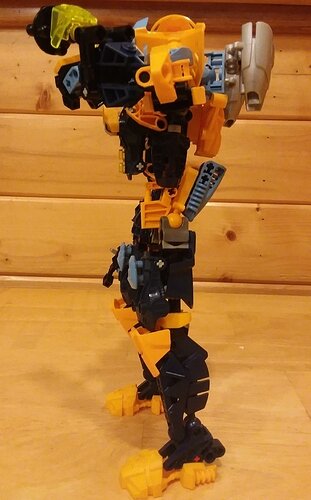 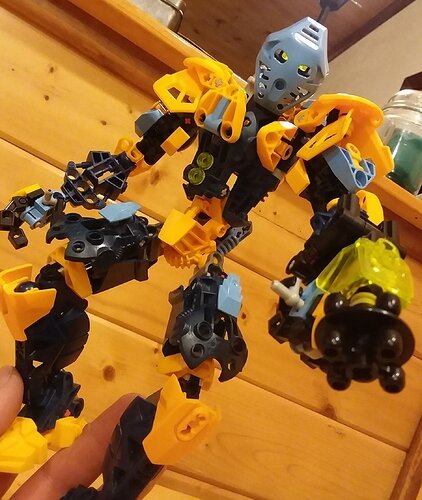 Aiden is the last Seraph left, his entire army having been destroyed in a recent battle with and army of Toa of Air and Lightning. Aiden only survived because his father forced him to leave the battlefield. 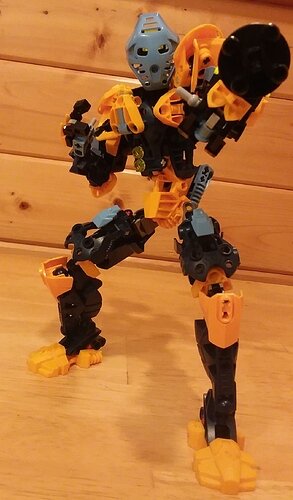 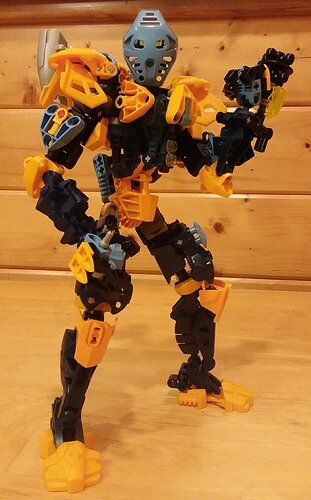 Aiden is ashamed of his cowardice, but covers up his shame with bravado and an aloof attitude, which puts him at odds frequently with Gavin. The two Toa Utu actually met on the battlefield once before, when Gavin was a soldier fighting with the Agori and the Seraphs had hired themselves to the racist Toa army that betrayed Gavin. That history drives a wedge between the two, but Nikolas and Othniel are usually able to enforce peace between the two. Aiden provides vital air support to the team, as well as help in gaining ground with his Elemental power over earth. 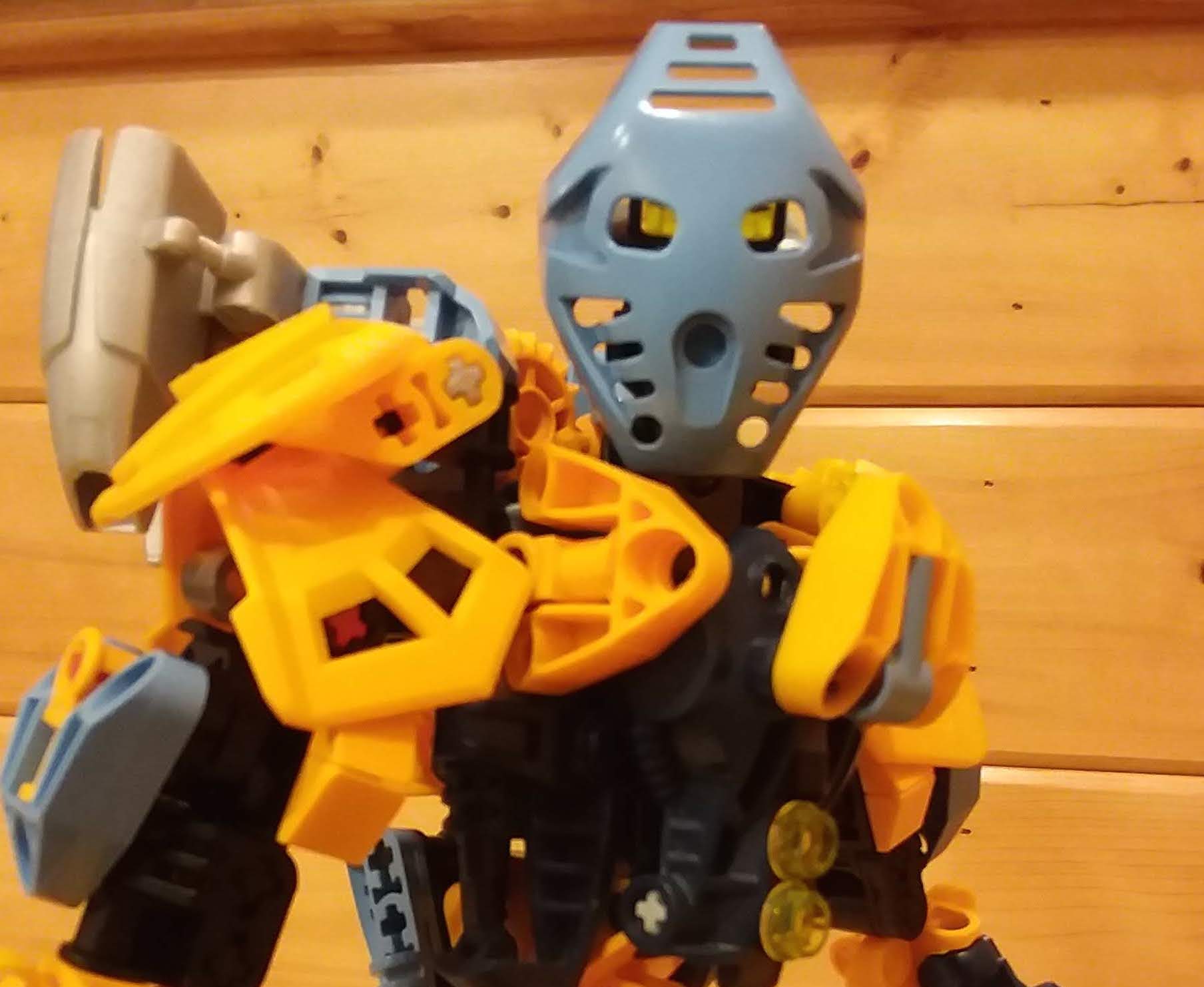 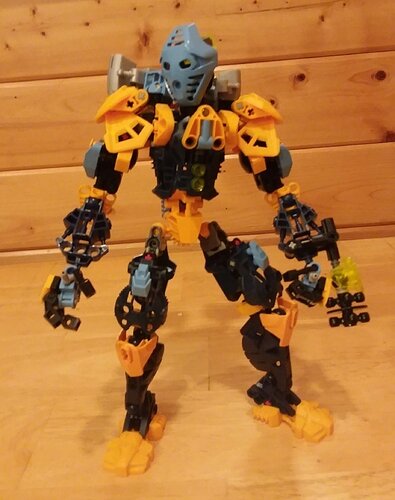 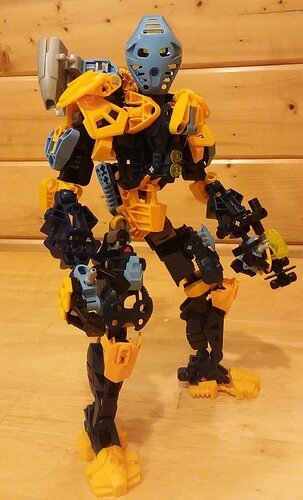 With the rest of the group. 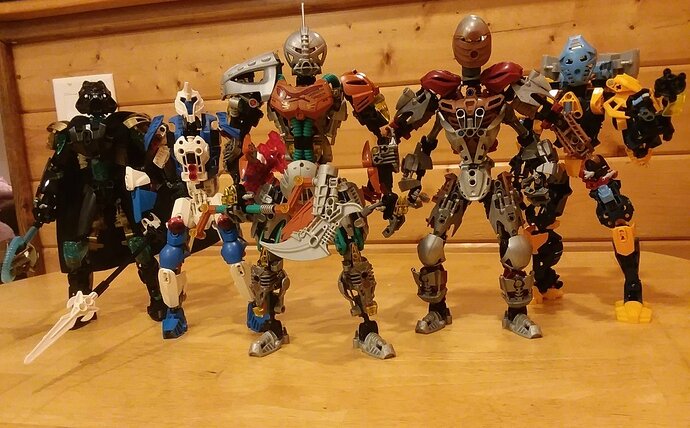 This one is my favorite by far, though the thighs are a little odd looking. If you flipped the armor piece upside-down it might look better.

This is a really cool moc and I love the backstory.

@TheMOCingbird Thanks for looking! Which armor part are you talking about, and what makes this one better than the others to you?
@SonicBionicleMaster Thanks!
@Kardax The backstories are a lot of fun to come up with. Thanks for looking!

The armor plate I was referring to was the ingnika shoulder armor located his thigh. The biggest metro blue one. And what makes me like him more than the others is probably his color scheme, and his very solid and just beefy looking upper body.

He looks like he has kankles. His ankles are a tad to small. But his color scheme is quite consistent

Coolest of the team! Great job!

Wrist cannon is killer! And I am digging the custom torso you’ve built for all of these. I wish I could come up with those designs.

Very interesting color scheme you’ve got there. I don’t see many MOCs that use that shade of light blue, and you used the few pieces in that color to your advantage. If you can find a few more for the shins, that would be cool. The torso looks solid from the front, not so sure about that Mata Nui chestplate on the back. I don’t like the thighs though, those Inika shoulders don’t really work for the type of shaping you want on thighs (they may work better put right side up). Also, is his midsection posable at all?

@SonicBionicleMaster Haha ok, do you have an idea to fix the ankles? I didn’t notice that til just now.
@Toa_Radrix Thanks! What makes this one the best? I did not expect that.
@BlackboltJohnson That is a big deal, thank you! I wondered what reaction the wrist cannon would get.
@Hawkflight Yeah, I wanted more for the shins. There are already pins taking up that space, unfortunately. You are the second person to recommend flipping those Inika shoulders, but then the yellow parts on the thighs don’t fit. Is there some other way you see to deal with the shaping? And yes, the midsections on all of these are posable. This one just didn’t have any poses where that is displayed. Thanks for looking!

I really like the color scheme and design. The torso is complex and cool, hands look good, really nice legs.