The TTV Minecraft Mata Nui map gave me a bit of inspiration in creating Bionicle themed maps in Minecraft. I have a vision of having an entire village of each and every element of the Bionicle unvierse (including all the secondary ones) across a giant well-explored Minecraft world, but that’s a while off.

In the meantime, I had a smaller project where I built a village of fourteen Matoran, one of each of the elements (minus Light and Shadow). I called it Anananga-Koro; “Anananga” meant “Fourteen” in OutOfGloom’s older Matoran conlang. I asked them about the newer version but I lost the message. Ho-hum.

I started making this map in 1.17, and even though I lost this map’s file for so long two updates have come since then I didn’t use anything that wasn’t available in 1.17 to finish it.

I hope this link works!

To give a bit of a tour:

I started with the home for the Fa-Matoran, who works as the village cartographer and navigator. Within their home is a lodestone set at 0,0 coordinates. The deepslate and worn copper colouration is in matching with my idea on Magnetism’s colour scheme; dark greys and cyans. The dark out is just to look nice. This home also features a map of the village and the broader region. 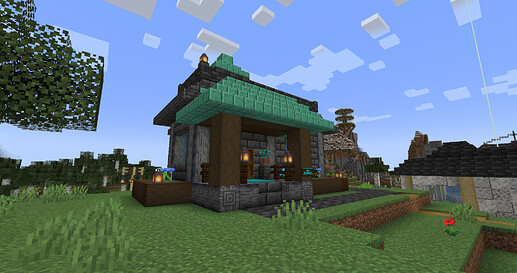 Oh, each villager has a name noted in their signs and in a logbook. I tried to give them individual personalities, but they don’t have enough signs talking about things, and my idea of giving each one a personal journal was going to be far too much work.

The next home is the Ko-Matoran’s. They are the village hunter (sort of based on Matoro’s forays into the drifts) and enchanter, so their home features a enchanting setup. Which means a lot of bookshelves, since Ko-Matoran are all scholarly. Lots of ice, since it’s a bit too warm in the birch forest.

Here I was having a few inconsistent thoughts on how to do this project. I made this in creative, and I wasn’t sure if I should be making this purely for aesthetic or if I should make it look like it can and would have been made in survival Minecraft. Ultimately the village comes off a bit of both. For instance I use a lot of birch wood because they live in a birch forest, but also since I have generated structures off there’s no way the Ko-Matoran could have built with those. Just a thing to keep in mind. 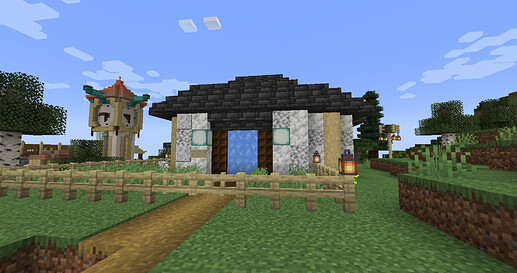 Next up (I’m not doing this in order of construction, btw) is the De-Matoran’s home. A bit bland and grey like the inferred De-Matoran colourscheme. It’s difficult to get a sound based theme in Minecraft, but with those new skulk block mechanics I gave the interior a wool lining. On that theme, I made them a wool farmer responsible for making all the banners around the map. They farm the dyes too. 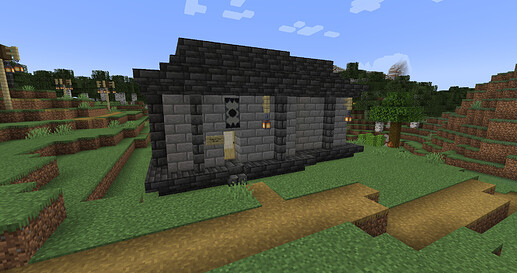 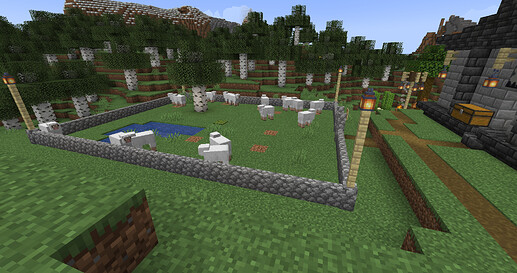 Up on a high mountain is a Le-Matoran’s home. I’m not very good at building in Minecraft, and this one really demonstrates it. I originally had a far more ambitious idea for it, but now it’s just a glass cylinder. The idea for the Le-Matoran is that he flies over the village with elytra looking for threats and incidents and dives in to help out.

You may notice in this picture the parrots. And in the Ko-Matoran’s home the wolf. Each Matoran has a pet that’s a least tangentially related to their element. Or sometimes just their colour; the Fa-Matoran has a pet glowsquid. 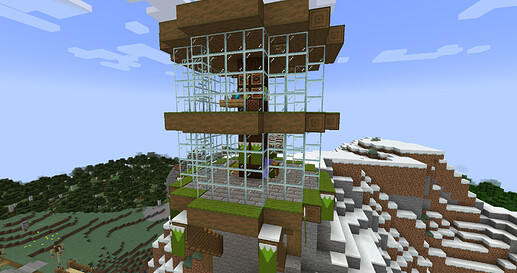 The Vo-Matoran has some fairly extensive builds related to her. She is the local redstone engineer, and lives in a redstone operated clocktower. I took the design of the clock from Minecraft Youtuber Wattles, though much of the tower is my own work. 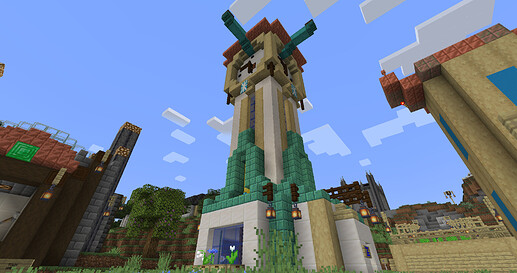 But more importantly she is the farmer. The Matoran eat potatoes (potato batteries therefore Matoran of lightning). With the Vo-Matoran in charge of food, I wanted to automate the proccess as best I could, but my redstone engineering is off and the autosorter I made to get rid of poisonous potatoes also swallows a lot of good potatoes. At first I was like "good, we’ll use those to replant) but I think more potatoes get sorter out than go into the autocooker. You also have to manually send the chestcart to drop cooked potatoes into the food silo. 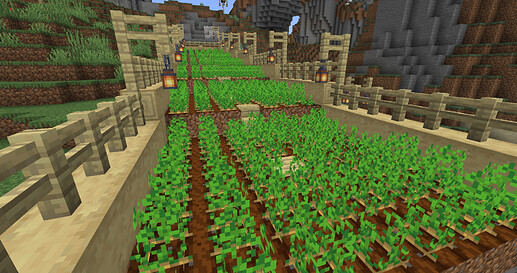 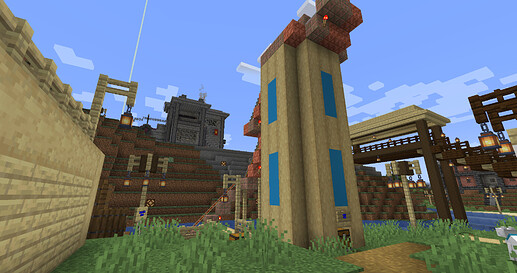 This structure is town hall. I think I made it pretty cool. The interior features a round table with fourteen seats and the personal banners of each Matoran. 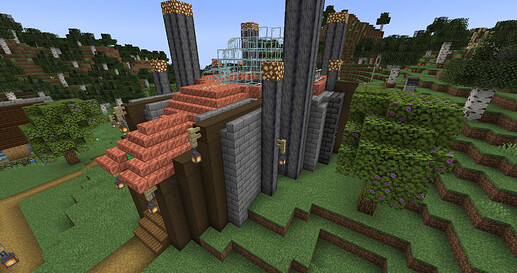 Another shared structure, this is the armoury. Although many of the Matoran have their own sets of armour, this one has a spare set for all fourteen of them, and weapons, and a bunker, and an escape route underground. 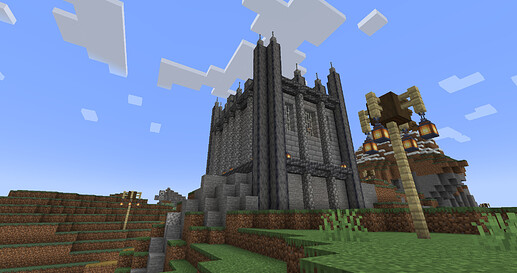 I also made them a temple. The exterior is a hidden away sculpture of a face, and the interior features little alcoves accommodated to each element. It’s a bit rushed, as it was made after I spent six months unable to work on this and just wanted it finished. It features a little Amaja square too! 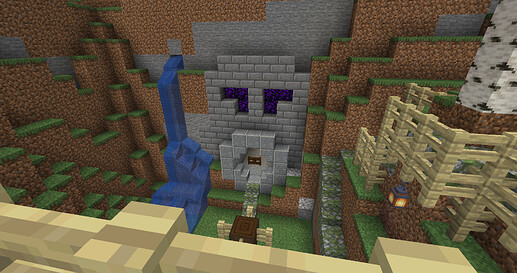 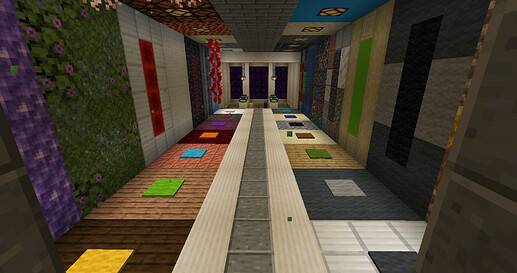 The Bo-Matoran’s home is a lazy one too. It’s a domed greenhouse featuring lots of flowers and a beehive. Yes, the Matoran of Plantlife caring for animals. But they also own the treefarm! The treefarm is also a pinched Wattles design. 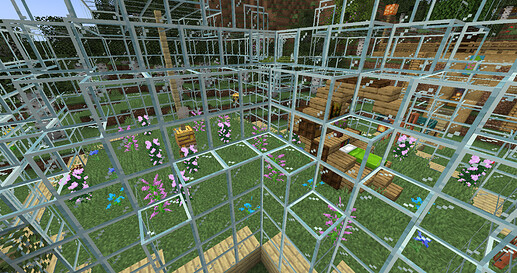 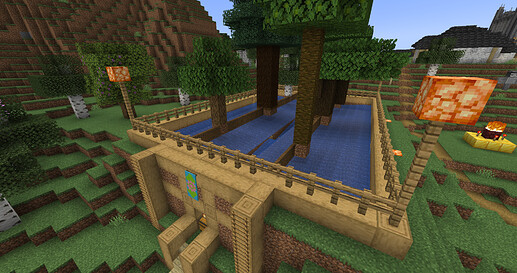 The Ce-Matoran lives in a cottage whose design I pinched from tumblr. She has an enchanting setup, and farms for most ingredients, and is also the village therapist. So she has a couch and healing crystals. I maintain Ce-Matoran are astrology girls (and there’s not real aesthetic I can give that implies “psionics” except giant crystals and witchcraft). 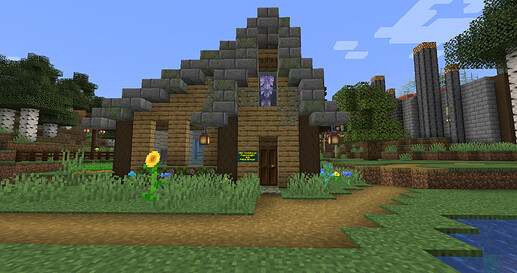 The Fe-Matoran lives in a factory featuring an over-complicated manual dropper system that sorts resources for export (I did not build any other villages for them to be trading with, for clarity. I dug a path out from the village but it just ends). I nearly made it look like the actual warehouse I work, but that’s way too big and complicated, but I guess an idea for a Fe-Koro. I also didn’t have time to imply that he and the Vo-Matoran were in a non-canonical relationship. 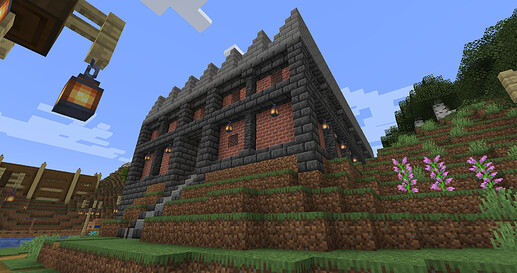 A bridge. I think it’s okay. 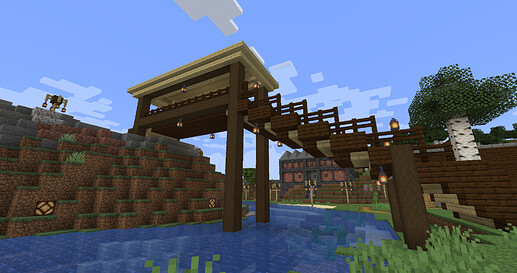 The Ga-Matoran, who is the village fisherwoman (those potatoes get old) and boatswoman, has the simplest home. Just a little hut, and a pet turtle that is not tethered and can conceivably escape either direction down the river. There is definitely nothing more to her. She has no secrets. Nothing at all. Why would you even think that? 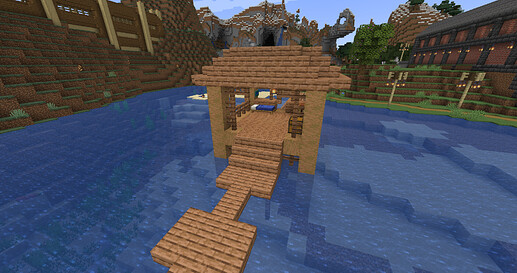 I’m very proud of the Ta-Matoran’s home. It certainly stretched my building abilities. He serves as the smith and metalworker for the village, where all the smelting takes place. He also has a lava farm for fuel. He also has a pet Blaze, so don’t switch this onto Peaceful difficulty. 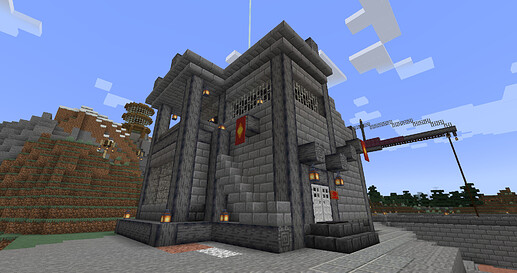 There is a beacon in the village. It’s kind of ugly, but I wasn’t sure how to make it. Netherite would have been easier on the eyes, but I was in “this must be feasible in survival” mode and they couldn’t have gotten that much Netherite. The decor for the village outside of buildings with a distinct purpose are fairly rushed; as I said I spent months not being able to work on this and just wanted it over and done with. 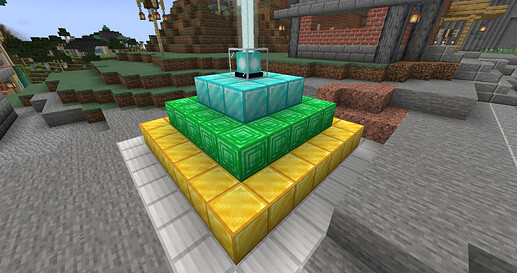 The Po-Matoran is the stoneworker of the village. They have a fairly simple house I pinched from tumblr screenshots, featuring stoneworking blocks. 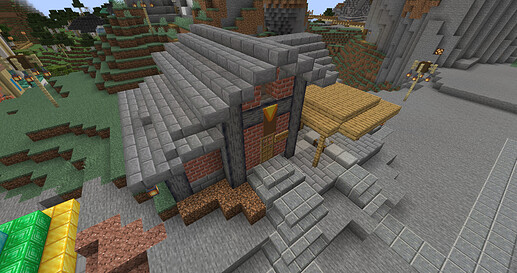 The Ba-Matoran operates the giant crane, which I took from an image on google. It was a nightmare to build and I’m not sure how convincing it is. Very Ba-Matoran colouration, and gold counterbalacing because I feel cold should be a gravity tertiary colour. Cranes were the only gravity-related work I could think of. Obviously this is where the map goes non-survival minecraft, as the crane isn’t functional. Storywise, he works with the Onu-Matoran to haul resources out of the mine and move it to the storeyard. The storeyard is also more aesthetic than survival, as blocks can just be stored in chests in survival. 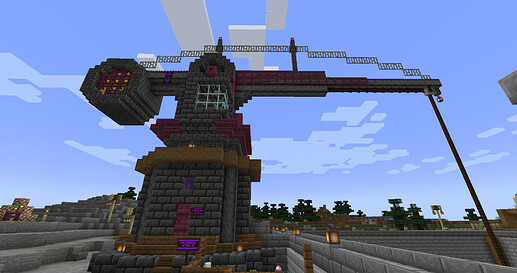 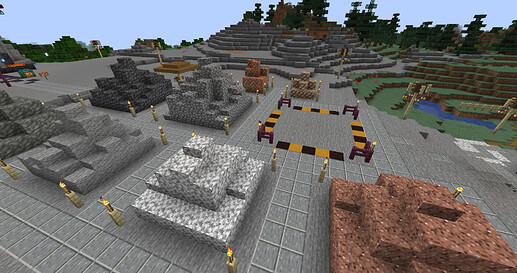 I had to use console commands to make this. The mine is a giant pit in the ground. They also have side branches, only one of which is complete because the branch mines were just far too much work. 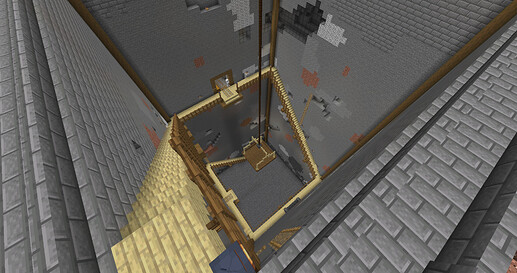 Within the mine, operated by the Onu-Matoran, is the Onu-Matoran’s home, carved into the underground. It also has a “rear entrance” which is ironically more easily accessed. 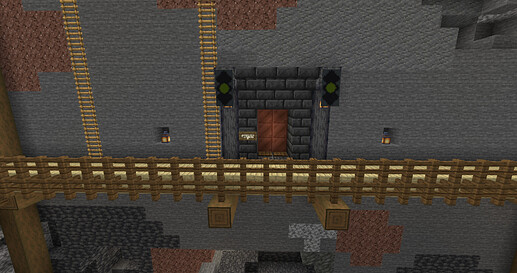 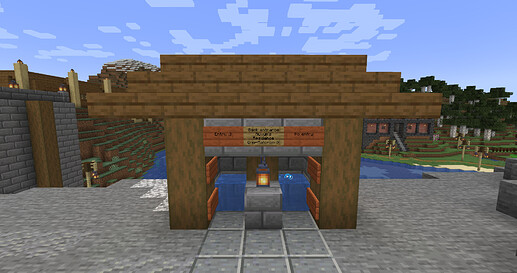 The Su-Matoran controls the Nether portal, and has their main home there. I planned for it to be more extensive, with storeyards of Nether resources and a dug out Netherite mine that accounted for all the Netherite I used in the map, but the same time issue occurred. Relating back to the bit where I didn’t have time for them to have individual personalities, I wanted the Su-Matoran to be kind of a reclusive arse. 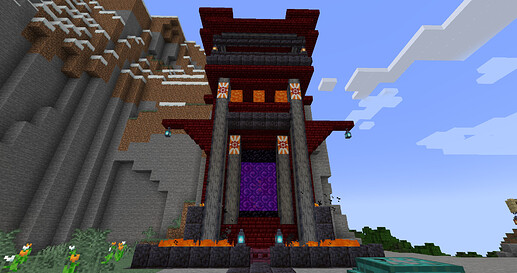 Lastly, I gave them a Kohli field. I had kohli fields in a much older and long deleted project of elemental villages (I abandoned it because they were all in different worlds, all felt samey, and too generic), so I’m glad to reuse the design. 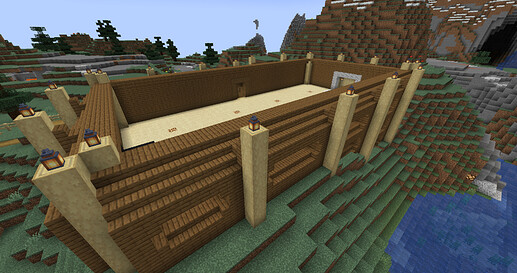 I didn’t give you any interior shots because I want you to download and discover things for yourself, and also I’m too out-of-energy to screenshot and write about everything. But I hope you enjoy this.

Now that this is out of the way I’ll move on to the larger project, where I build an entire village for each of the elements spread across a giant well-explored world. It’ll take years. See you then!

Ooh these look really cool! I quite like your different takes on the elemental themes.