Annona and the Elemental Lord of Elisia [Pitch]

Hello, Message Boards! It’s @ToaNoah_Wafflemeister here to bring you a new pitch! Now, there are some crazy things I have ideas for, but before that, I would like to thank @Kardax, @odnanref101993, @UltimateMustacheX, and @Bokarda for helping me edit and finetune this so it mostly stays canon and stuff. They were very helpful, and I can’t wait to work on more things in the future.

Now, I know this has big ideas, most of which won’t matter until Year 3, but I think this may have some big impacts on the beginning of the story, so I posted it now. Comments and feedback are so very much appreciated, and please have a Bonkle-filled day!

Creation
As Karzahni created the Elisians and the lightning element, he noticed the Elemental Lords that his brother created to protect the Matoran and their respective elements. Seeing the alternate future where the Great Beings are overthrown because of the Elemental Lords, Karzahni took great notice of this, believing seven Lords would cause more chaos than six. Unlike Ekimu, Karzahni created his elemental lord to not be so elemental. Karzahni truly created more of a daughter with the position of an Elemental Lord than an actual one. And so he treated her as if she was his own child. Karzahni was conflicted, with his desire to sow chaos, as well as his dream to be free of his insanity. Deciding that he could make his creation able to do both, he gave her abilities over the mind. She could edit the electrical flow in the neurological system (assuming Matoran and Karzahni have that) to help ease his emotions, and to clear his mind. He felt with these powers, she could eventually cure him. Karzahni also placed precautions in case she ever turned on him, and created her so she could not harm him or betray his will. He also knew that she would be hated by his brothers and many would try to kill her. And so he decided to her secret, so his last hope of being sane could not be killed. As she was finished, Karzahni named her “Annona”, or “Dream”, after his dream of being free of insanity.

Karzahni’s Influence
Believing she was Karzahni’s “Dream” and that he would never betray his daughter, Annona grew very attached to him, and did exactly what he asked of her. However, her influence of his emotions was actually hurting Karzahni, making him feel for others less and become even more insane. Afraid to tell him, Annona stopped “helping” Karzahni so much and tended to her people more. Angered, Karzahni asked why. As afraid as Annona was of Karzahni’s anger at her for failing, she was more afraid of what would happen if she disobeyed him. Annona told him the truth, and Karzahni stripped her of her Elemental Lord status. Reduced down to a simple Elisian, Annona was heartbroken. Wishing to please her father, Annona noticed the power the other Matoran regions seemed to love and hunger for, and believed her father would desire something like that. She summoned the armies of Elisia, and attacked a neighboring floating region, Kanae. Uxar saw the attack and summoned his armies to protect Kanae. In a ferocious battle, the skilled and coordinated Kanaeans crushed the lawless and chaotic Elisians. Annona had failed Karzahni, and made it worse by taking half of the healthy Matoran and getting them killed. Karzahni was so infuriated, he told Annona that she failed both of her purposes, and that if she wasn’t strong enough to cure him, and wasn’t strong enough to tame his armies, she could never amount to anything he’d want. And then the war between the Brothers began, sentencing each of them to eternal imprisonment.

Reign of Terror
Realizing her father did not care about her, Annona felt betrayed and used, realizing her father’s “dream” was the empire she was supposed to create for him. Turning to the Elemental Lords for acceptance, they turned her down, believing she was the cause of the great war, and had no power. In her anger, Annona turned to the one people she could be accepted by: the Elisians. If she could not be a daughter, and could not be an Elemental lord, then she would be a Toa, the unexpected event. Realizing her mind powers still existed, she began to experiment with them. Annona found she could change emotions to cause fear and anger on a massive scale, and could control not quite what they saw, but how they processed it. She could also, if a mind was clear enough, talk to them via a mental link. Using these to prove herself to the Elisians, she began a tyrannous rule over her people, harshly punishing those who would not serve her, and greatly rewarding those who did. One such Matoran was by the name of Takanuva. Annona blessed Takanuva, giving him riches and power and the most beautiful Vo-Matoran to be his wife. However, Annona still felt a need to stay loyal to Karzahni. Believing the Great Being wished for power the same way she did, Annona decided ruling just one region would not be enough to please him. Seeking to expand, Annona mobilized her subjects and sought to take over Kanae. Quick to respond, Uxar called upon his brothers and sisters (don’t quite exactly no the genders of the Lords). They called upon a new team of Toa to wipe out Annona and her army. The Toa found the moraled army much harder to defeat, and decided the best thing to do would be to cut the head off the snake (Hobbit for life). Their leader Hydraxon challenged, and then destroyed Annona, seemingly for good. The Elisians quickly surrended after that.

The Dreams
Annona’s death brought pain upon the Vo-Matoran, and they all moved on. However, for Takanuva, Annona could not possibly be dead. Every night, as he slept, he dreamed that Annona was returning, and she needed him to get her followers. As the dreams continued, they became more horrifying, until Takanuva felt as if there was a monster haunting him, forcing him to give her followers. Takanuva spread the word of his strange dreams, though the Vo-Matoran did not believe him. However, Takanuva convinced his family to believe, and so they did. They too had dreams of Annona, commanding them to spread the word. Still no one would believe the foolish family. However, Annona’s consciousness was still alive, buried in the dust that was all that remained of her previous body. Takanuva collected the dust and built memorials with vials of it across Elisia, which spread Annona’s consciousness across the city. As the years and decades passed, the generations of Takanuva’s family grew many, and they all believed in Annona’s return, especially one Matoran named Voriki. plots to take revenge on her stubborn people, and to spread her power to all of Artahka.

I’d be cool with doing a small statue render but I’d need to know armour details (pauldrons, original G1 style, G2 style?) and what weapon she’d use or be represented with.

Oh, yes please! This is like my dream (no pun intended if you don’t want there to be one)! I’m trying to decide whether I should go with her previous form or what her current one may look like, though I could see them having many similarities.
I would say the armor would be a dark, rich violet and a glimmering gold (if the statue would include colors) with a smooth shaping, though menacing spikes would protrude form the sides, arms, and shoulders. She would have a huge cape signifying royalty that would be removed in battle, and she wears a skirt that not only shows wealth and power, but also doubles as a battle skirt. Her weapon would be a glaive made to have a lightning-like appearance that has an extendable chain connected to the blade to make some sort of sword-flail or something. I’m not the most well-versed in weaponology. These are just my ideas, feel free to edit how you wish. Thanks so much!

So… a glaive that is also a sword-flail? The skirt would mean it won’t be minifig, I’ll have to custom it completely.

Oh okay, I honestly don’t care either way, with the whole sword flail thing you can keep it however you want it to, I just imagined a long handle with a chain at the end which is also connected to a sword. If it’s easier to do a glail I’m cool with that

I think he meant this guy: 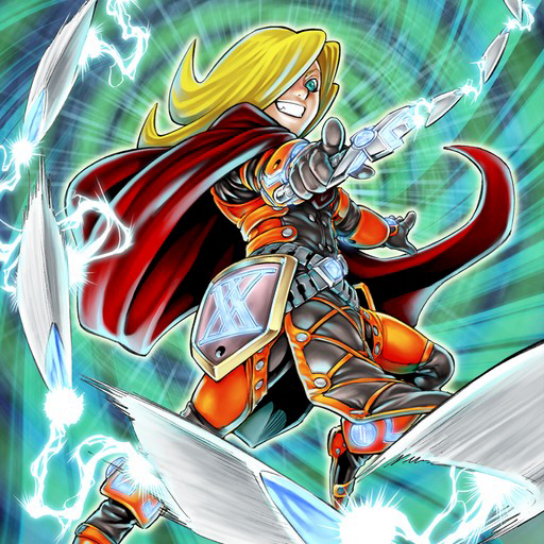 That’s the one. It’s clearer to see in the anime.

Ok from these images (i’m assuming they’re the D&D weapons choices if they’ve been deleted) I’m thinking we just give her 2 weapons or at least I moc up 3 designs, one with both and 2 with one option. 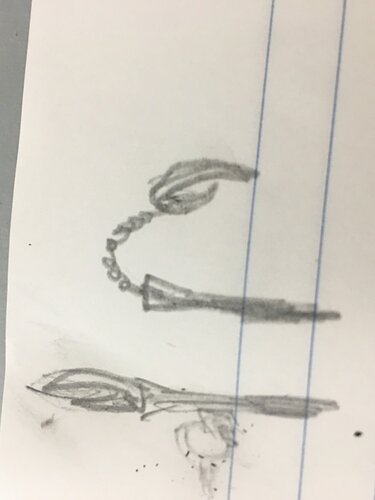 I drew this in English, but these are just my ideas, you can do whatever you want, I really like your ideas so far

@Sanokal Yeah, I can only really see make the fact they both have capes

Ok I’m working on minifig designs, I just need to know colours, I’m going with Purple, silver and black with trans purple for the lightning.

OH YES! I’m so excited to see how it looks! Thank you so much! I’d say those four colors are perfect! Maybe lime green for the eyes and heartlight for a cool contrast 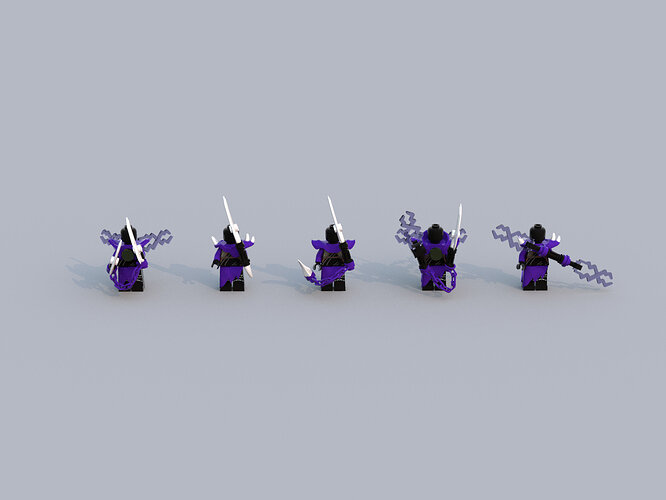 Ok, all use a different chest armor piece however 2 and 5 use the same, from left to right:

uses a skirt piece and ninjago printing on the chest and some armour piece for the legs.

I really like these! While these all look cool, my favorite is probably the multi-toned bone one, my favorite weapons are… all of them? Okay, maybe my two favorites are the first, third, and and fourth.

I meant the sword.

Good idea, considering we never got an Annona set.